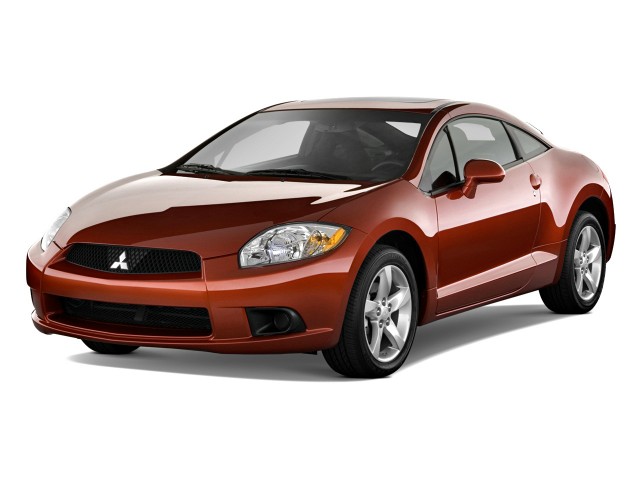 The Spyder is the more enjoyable of the two body styles; get it with the V-6 and the great-sounding Rockford Fosgate audio system and the 2010 Mitsubishi Eclipse feels like a more expensive vehicle.

To bring you both comprehensive information and an expert opinion on the 2010 Mitsubishi Eclipse, TheCarConnection.com's editors have driven both the coupe and Spyder versions, along with both engines. TheCarConnection.com has also researched road tests covering the Eclipse to bring you the most useful information on how it stacks up with other low-priced sporty rivals.

The Mitsubishi Eclipse is a sporty, front-wheel-drive coupe or convertible that doesn't have a lot of frills or a very refined look and feel, yet it can be reasonably entertaining to drive—especially in the V-6 versions of the coupe or Spyder.

With styling that's a little less mature and refined than the balanced design of the Honda Accord Coupe or Nissan Altima Coupe, the 2010 Mitsubishi Eclipse just isn't as pretty with its mix of lines and molten-looking, curved sheetmetal. However, its aggressive, almost giddy styling might appeal to a particular type of buyer who wants attention. Last year the Eclipse got a modest restyle in the way of restyled front and rear fascias, plus an enhanced appearance and new exhaust for the GT. For 2010, the appearance of the base GS model gets dialed up with most of those changes, even in four-cylinder form.

Inside, the plain-faced dash of the 2010 Eclipse is made with good-quality materials that are fitted together well. The front seats are supportive, but the interior is intimate and many drivers might find headroom tight in the coupe; the rear seats are uncomfortable for adults.

The 162-horsepower, 2.4-liter, four-cylinder engine that's standard on the base Eclipse GS and GS Sport quite simply struggles to keep up, and doesn't fit the Eclipse's aggressive appearance. The 265-hp, 3.8-liter V-6 that comes in GT models brings a completely different personality, with its ample torque making the 2010 Mitsubishi Eclipse feel at times like a front-wheel-drive muscle car. The four-cylinder cars offer a five-speed manual or four-speed automatic, while the V-6 coupes come with a choice of a slick-shifting six-speed manual or a five-speed automatic. Fuel economy for the four-cylinder model ranges up to 20 mpg city, 28 highway, but the V-6 rates at just 16/25 mpg with automatic in the Spyder.

The 2010 Mitsubishi Eclipse is based on the Galant sedan, so it doesn't handle with much finesse or brake with the same verve as true sports car rivals; that's the only truly disappointing aspect of the Eclipse if you can get past the tight cabin and slightly overstyled exterior. On the upside, the Eclipse exhibits excellent ride quality.

Stability control is now standard on the Mitsubishi Eclipse for 2010; also included are anti-lock disc brakes, side impact airbags, and side-curtain bags (except on the Spyder). Although the federal government hasn't crash-tested the Eclipse, the model receives top "good" ratings for frontal and side impact protection.

For 2010, a Bluetooth hands-free calling interface and rearview camera system are offered on the GS Sport and GT models; the GS Sport is the pick for those who want the fuel efficiency of the four-cylinder engine but are pulled in by the features on the V-6. A Rockford-Fosgate 650-watt audio system is available as part of the optional Sun & Sound Package on the GS or GT models. Other top options include heated leather seats and automatic climate control.

Despite an aging design, the 2010 Mitsubishi Eclipse still looks the part either as a coupe or convertible.

Either as a coupe or convertible, the 2010 Mitsubishi Eclipse's sleek, aggressive styling turns heads, though inside especially the plasticky wrap-around look is starting to appear dated. 2009 Eclipses received restyled front and rear bumper fascias for top GT models; now for 2010 base GS models get the same treatment.

Several review sources point out the resemblances between the new Eclipse and muscle cars of the past. Though the 2009 Eclipse sports the same body style created in 2004, Cars.com notes, "the look is what turns you on." Edmunds.com agrees, remarking that the Eclipse GT "does merit more serious consideration" when looking for a vehicle that will turn heads. Motor Trend remarks that the 2010 Eclipse's "spaceship styling has aged well," while Road & Track says the stylized elements of the Eclipse "add flair in a market in which flair sells."

The 2010 Mitsubishi Eclipse appears to mix styling elements. Depending on how you see it, you might gauge the styling as busy or unique. To Motor Trend, the front end looks like a "gaping maw" but is "offset by fluid curves."

While most convertible versions of cars are manufactured from the hardtop version, Popular Mechanics notes that the "open-top version was engineered to be topless from inception," meaning that its proportions look right top up or top down.

The tight, cockpit-focused interior styling can also be rather polarizing, both conceptually and functionally. Motor Trend comments, "the roof, dash, and door panels seem shrink-wrapped around you." Edmunds praises the "unusual details such as door releases shaped like flip phones."

The 2010 Mitsubishi Eclipse sounds as sexy and powerful as it appears—if you opt for the V-6 engine. But if you want true sports-car handling you should look elsewhere.

If you want true sports car handling, you may want to check out other models, but if you want a car that looks and sounds sexy and powerful—with plenty of straight-line oomph in the V-6 models—then the 2010 Mitsubishi Eclipse might be right for you.

Overall, the performance of the 2010 Mitsubishi Eclipse doesn’t quite match its extroverted looks. Motor Trend argues that "as a modern sport coupe, it's not quite there yet."

The 3.8-liter V-6 engine produces 265 hp with a six-speed manual gearbox or a five-speed automatic, and for those who want the Eclipse to feel even remotely sporty, it’s the only choice. According to Motor Trend, the V-6 clocks a "0-to-60-mph acceleration time of 5.8 seconds," and Car and Driver rates the Mitsubishi Eclipse the seventh quickest car in 2007. The 2.4-liter, four-cylinder produces 162 hp when teamed with a five-speed manual or four-speed automatic transmission. Jalopnik remarks that the sexy styling and the throaty purr of the V-6 engine could "seduce you into serious speed."

Other reviewers aren’t quite as happy with the performance of the Mitsubishi Eclipse near the limit or when the roads turned twisty. Cars.com reports that "the Eclipse is front-heavy and understeer is prevalent, even when off the throttle.” One test driver for Jalopnik "squeezed the gas [entering a curve] and nearly drove the new Mitsubishi Eclipse GT into a parked car."

The 2010 Mitsubishi Eclipse has a somewhat tight cabin that’s just comfortable enough for most in front, but don’t plan to carry backseat passengers or much cargo.

Comfort and space in the front seats of the 2010 Mitsubishi Eclipse rate as just acceptable, but don’t expect much out of the tight backseat.

Road & Track likes the feel of the front seats but points out that "rear-seat head room suffers." The 2010 Mitsubishi Eclipse's front seats are built to feel more like a cockpit than a car. "The low-slung driving position makes you feel like you're inside the car, not riding on top,” says Road & Track, and Cars.com calls out the "deep cutouts in the doors that give front-seat riders extra elbowroom."

The tight front-seat quarters of the 2010 Mitsubishi Eclipse might make occupants feel as if they’re in a womb. It’s not for the claustrophobic; Motor Trend reports "the roof, dash, and door panels seem shrink-wrapped around you."

No reviewers have anything kind to say about the diminutive backseat, which is hard to access even if you want to place a child seat there. Cars.com points out that "the 50/50-split rear seatback folds down for more capacity."

The Eclipse Spyder convertible involves less compromise than some convertibles, with a level of comfort close to that of the coupe. Popular Mechanics says "its folding cloth top, which disappears beneath a hard tonneau cover at the touch of a button, helps distance it" from the competition.

The 2010 Mitsubishi Eclipse has most of the safety features you’ll expect in a sporty coupe—along with reasonably good occupant protection.

The 2010 Mitsubishi Eclipse offers pretty good occupant protection, based on available crash-test information. Although federal crash-test results aren’t yet in, the Eclipse performs quite well in Insurance Institute for Highway Safety (IIHS) tests, where the Eclipse is rated "good" in frontal and side impact but "marginal" for rear impact.

Even though the Eclipse’s styling is now a bit dated, Mitsubishi keeps its safety feature list with the times; electronic stability is now a standard feature across the 2010 Mitsubishi Eclipse line.

Used Mitsubishi Eclipse for sale near

The Mitsubishi Eclipse’s feature list is looking better for 2010, yet in this category it’s still no standout.

The 2010 Mitsubishi Eclipse offers a comprehensive package of features to fit the needs of almost all car enthusiasts—minus an auxiliary input for MP3 devices.

The Eclipse shines when it comes to cargo space, offering an enormous 15.7 cubic feet of storage, and according to Edmunds, this is even "before folding the backseats."

For 2010, a Bluetooth hands-free calling interface and rearview camera system are offered on the GS Sport and GT models; the GS Sport is the pick for those who want the fuel efficiency of the four-cylinder engine but are pulled in by the features on the V-6.

Shoppers usually want a strong, punchy sound system in a convertible, so those interested in the Spyder should seriously consider the powerful Rockford Fosgate sound system. Popular Mechanics reports that the optional "650-watt sound system [is] designed to compensate automatically for driving with the top up or down." And although late to the game, the Eclipse finally gets an auxiliary input jack for all models for 2010.

The base system isn’t so bad either, especially in the coupe. Cars.com reports that it "plays MP3 files on CD-ROM discs"—as opposed to DVDs. Other standard equipment on the base GS includes cruise control, a leather-wrapped steering wheel, air conditioning, remote keyless entry, and a 140-watt, six-speaker CD stereo.

Be the first one to write a review on 2010 Mitsubishi Eclipse
Rate and Review your car for The Car Connection! Tell us your own ratings for a vehicle you own. Rate your car on Performance, Safety, Features and more.
Write a Review
Browse Used Listings
in your area

7.2
Overall
Expert Rating
Rating breakdown on a scale of 1 to 10?
Compare the 2010 Mitsubishi Eclipse against the competition
Compare All Cars
Looking for a different year of the Mitsubishi Eclipse?
Read reviews & get prices
Related Used Listings
Browse used listings in your area