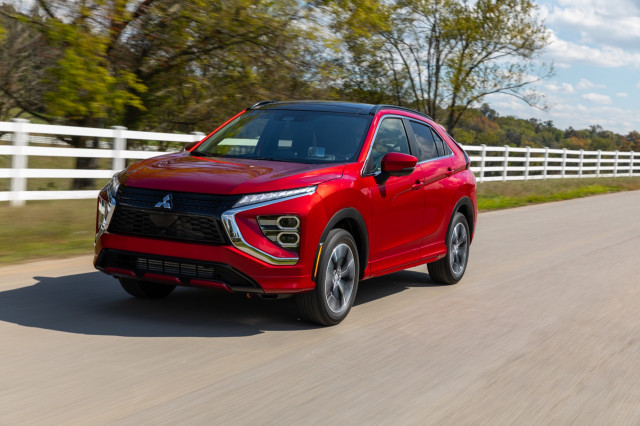 Jump to the LE trim for a larger touchscreen with smartphone compatibility.

The Eclipse Cross comes with standard all-wheel drive this year, but the base model lacks key features.

What kind of vehicle is the 2023 Mitsubishi Eclipse Cross? What does it compare to?

The Mitsubishi Eclipse Cross is a small crossover with more interior space than many subcompact rivals. It vies for sales with other entry-level crossovers such as the Kia Seltos, Hyundai Kona, and Nissan Rogue Sport.

Is the 2023 Mitsubishi Eclipse Cross a good SUV?

The Eclipse Cross is an average SUV with an average price and average feature set. It’s perfectly average, with a TCC Rating of 5.0 out of 10. (Read more about how we rate cars.)

The Eclipse Cross comes with standard all-wheel drive across the lineup. Last year, it was a $1,600 upcharge. This year’s model costs $2,500 more, but Mitsubishi added LED headlights to cast the light away from its inflationary price increase.

Restyled last year with a traditional liftgate instead of a split rear window like the Toyota Prius, the Eclipse Cross falls more in line with the design of the larger Outlander, which is Mitsubishi’s bestseller. The front end tries hard to stand out, with chrome clamps that flank the grille like some kind of X-wing fighter. Standard daytime running lights squint from the top of the clamps, but in the recess Mitsubishi stacks LED headlights with fog lights. The split lighting signature is…different.

Inside, large swaths of black plastic are broken up by silver plastic pieces, though it can’t conceal the crossover’s budget-conscious nature.

The powertrain carries over, but it doesn’t carry anything with any urgency. A 152-hp 1.5-liter turbo-4 lags from a stop, and continuously variable automatic transmission feels a step behind what the driver tells it to. Standard all-wheel drive adds grip and cost equally, and fuel economy tops out at a very average 26 mpg combined.

The Eclipse Cross occupies bigger proportions than other small crossovers, giving it more rear leg room and more cargo room than most rivals.

Crash-test results are mixed, with the IIHS giving it a rare “Poor” grade on its side impact protection. Automatic emergency braking with pedestrian detection and lane-departure warnings come standard, and blind-spot monitors, a head-up display, adaptive cruise control, and a surround view camera system are offered on top trimsl.

How much does the 2023 Mitsubishi Eclipse Cross cost?

Sold in ES, LE, SE, and SEL grades, the 2023 Eclipse Cross starts at $27,090 including a $1,295 destination charge. That’s an increase of $2,500 over the 2022 model year, but standard features include AWD, LED headlights, 16-inch wheels, a 7.0-inch touchscreen without smartphone compatibility, and keyless entry. A 5-year/60,000-mile new car warranty with roadside assistance assures Mitsubishi shoppers.

The $28,340 LE adds the right tech for these tech-enabled times, with an 8.0-inch touchscreen with smartphone compatibility, a satellite radio trial, two USB ports, heated front seats, and black 18-inch alloy wheels. The SEL Touring tops the lineup at $32,690.

Where is the 2023 Mitsubishi Eclipse Cross made?

The Eclipse Cross has the waspy look of an insect Transformer.

Is the Mitsubishi Eclipse Cross a good-looking SUV?

Last year, Mitsubishi ditched the split rear window for a more conventional take on the small crossover, but the front end looks like pinions taking flight beyond a multitude of eyes. We don’t award points for trying, resulting in a 5 out of 10.

The Eclipse Cross shrinks down the larger Outlander into a series of cuts, creases, and questions. Chrome wings extend from the black mesh grille, with thin daytime running lights on top and the recess filled with LED headlights stacked like the Griswold’s family truckster. The X-wings lead to twin body lines running along the sides in a more traditional fashion, with an upsweep toward the tail and an integrated rear roof spoiler tapering the end. The standard 16-inch wheels look too small for its proportions; the 18s on all but the base model better balance the profile.

Inside, Mitsubishi doubles down on black plastic on the dash, doors, and console, but clearly defined buttons for HVAC and audio controls keep it simple, if not dated. A mechanical gear shifter and a basic touchscreen add to that feeling.

The Eclipse Cross reveals its budget-car roots under the hood.

Standard all-wheel drive bundles a popular feature for a price, but the added grip can’t overcome the sluggish turbo-4 and a CVT that feels like it’s crying uncle without much force at all. The coarse CVT costs it a point to a 4.

Is the Mitsubishi Eclipse Cross 4WD?

All-wheel drive comes standard on the 2023 Eclipse Cross. Last year, it was a $1,600 upcharge. This year, the compact crossover with AWD costs $2,500 more than last year. So.

How fast is the Mitsubishi Eclipse Cross?

It sides with the turtle, not the hare. A 152-hp 1.5-liter turbo-4 seems to pause before the CVT engages. From a stop, the lack of engagement can be a daily frustration, if not a danger. Once moving, the pause between the accelerator and the get-up-and-go means passing moves must be planned in advance. Though the transmission comes with simulated steps, they take too long to “downshift” and bump up the rpms to get the engine into its powerband.

The Eclipse Cross rides like its insectoid body suggests, flittering but in control. It’s more even than harsh, but it operates with a buzz. Expect body roll in turns, but the Eclipse Cross likely won’t be driven hard enough to push it beyond comfort zones. Steering is lightweight and numb, making it good for city environments and parking lots.

The inside of the Eclipse Cross welcomes rear riders and their gear.

The Eclipse Cross earns a point for its 23.4 cubic feet of cargo space, to make it a 6.

The cabin can’t conceal its budget-car bones, with a lot of plastic panels and a louder than average ride quality. Seats for both front and rear passengers are decent, though they are neither notable for their comfort or discomfort. Though the Eclipse Cross’ lists 35.2 inches of rear legroom, matching the Toyota RAV4, its back seat doesn’t feel as roomy as the Taos and Seltos. Still, slotting between the compact and subcompact SUV styles, the Eclipse Cross is roomier than average.

Behind the rear seats is 23.4 cubic feet of cargo space, which expands to 50.1 cubic feet with the 60/40-split rear rear seats folded down (the available panoramic sunroof shaves cargo room down to 49.7 cubic feet).

The Eclipse Cross did not perform well in the IIHS’ new side crash test.

How safe is the Mitsubishi Eclipse Cross?

The NHTSA gave the Eclipse Cross a five-star rating, but the IIHS faulted its side impact protection, thereby canceling its earned point. Standard automatic emergency braking at speeds of up to 50 mph earns it a point above average to a 6.

The Eclipse Cross also comes with lane-departure warnings, but only the top two SE and SEL grades get blind-spot monitors and automatic high beams. The top SEL can be had with a surround-view camera system, adaptive cruise control, and high-speed automatic emergency braking.

Skip the base ES and its lack of smartphone compatibility.

The $27,090 Eclipse Cross comes with an excellent 5-year/60,000-mile warranty that earns it a point, but the lack of Android Auto or Apple CarPlay on its base infotainment system gives that point right back. The middling car gets a middling 5 for features.

The base ES comes with cloth seats, dinky 16-inch alloy wheels, a 7.0-inch touchscreen, and a single USB port for phone charging.

Which Mitsubishi Eclipse Cross should I buy?

Skip the base model for the LS. For $1,250 more it adds an 8.0-inch touchscreen with Android Auto and Apple CarPlay, a satellite radio trial, two USB ports, heated front seats and 18-inch alloy wheels that make it look less of a clown car.

How much is a fully loaded Mitsubishi Eclipse Cross?

The SEL with a Touring package costs $32,690 this year, which should price shoppers away from Mitsubishi. It adds a panoramic sunroof, heated rear seats and steering wheel, leather upholstery, an updated sound system, a head-up display, and adaptive cruise control.

The Eclipse Cross maintains its average with an average 26 mpg combined.

Is the Mitsubishi Eclipse Cross good on gas?

With all-wheel drive now standard, the base Eclipse Cross ES gets 25 mpg city, 28 highway, and 26 combined, which is average for the class. It pars the course with a 5.

Other grades earn 25/26/25 mpg. The small engine helps, but the lack of a hybrid option limits the upside against rival small crossovers.

Be the first one to write a review on 2023 Mitsubishi Eclipse Cross
Rate and Review your car for The Car Connection! Tell us your own ratings for a vehicle you own. Rate your car on Performance, Safety, Features and more.
Write a Review
$25,795
MSRP based on ES S-AWC
Change Style