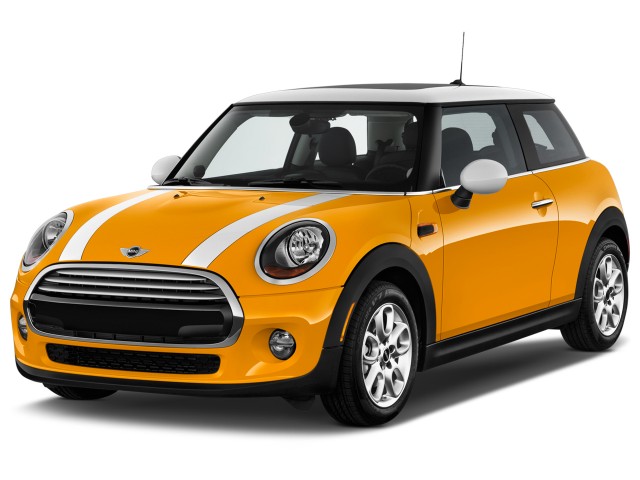 Keep an eye on the bottom line--base prices are reasonable, but adding the features and styling to make it your own could result in a very pricey MINI.

The 2014 MINI Cooper is a fun, smart, and practical way to get around, without giving up its sporty, quirky side.

The MINI brand has gone through many changes in its BMW-owned revival, but the fundamental spirit of driving fun and economical practicality remain. The zippy, cute-faced MINI is a small car that has carved itself a unique niche in the market.

For 2014, there aren't any significant changes, and pricing remains stable. An all-new MINI is due to debut soon, but the design is likely to expand on the current theme--though not likely to expand much in size.

The shape and details that make even a modern MINI instantly recognizable will remain, blending the classic with the current in a compact and, sometimes, cute design. The new Cooper Hardtop will arrive first, unveiled toward the end of 2013 before going on sale in the first half of next year as a 2014 model. Updates to drivetrain and other equipment haven't been released yet. The remainder of the MINI lineup will continue forward for the 2014 model year.

As for current styling, a short hood, "floating" roof, and big, round headlights are among the characteristic elements shared among the Coupe, Convertible, Roadster, Clubman, and Hardtop (hatchback) models.

Inside, much is the same between the various models, at least in the front row. The center-mounted speedometer puts the sporty side of the MINI at the fore, while quirky buttons and switches sit in a funky design that shows the Cooper's lighter side. It's a busy look, but it all works within the MINI's palette.

Under the hood, the MINI range shares its engines: base models get a 121-horsepower, 1.6-liter four-cylinder; Cooper S models a 181-horsepower turbocharged 1.6-liter four; and John Cooper Works models use an even hotter 208-horsepower version of the engine. For base and Cooper S models, a choice of six-speed manual transmission or six-speed automatic is available; the same is also true of the John Cooper Works models, with the addition of the automatic option in 2013. Despite their sporty nature, the MINI range can also be efficient, with gas mileage of up to 29 mpg city and 37 mpg highway.

Despite their small size and sharp handling, the many MINI variants ride surprisingly well. Road noise raises its head, and as you climb the sport spectrum, choppiness and harshness rise, most noticeably in the John Cooper Works models. All MINIs have issues with rearward visibility, thanks to the high beltline, low seating position, and somewhat chunky rear roof supports. In Clubman models, the center-opening rear door further hinders visibility.

Comfort and space are surprisingly good--in the front seats. Even those well over six feet tall should find plenty of leg and head room, though the low roof of Coupe and Roadster models may make it harder to get inside. The rear seats of Clubman and Cooper Hardtop and Convertible models are usable, but not spacious. Materials are good throughout, but perhaps with more hard plastic than you'd expect at MINI's price point.

Customization straight from the dealer is one of MINI's strong suits, and there is a host of aesthetic tweaks that can be made to any MINI, whether Hardtop, Clubman, Roadster, Coupe, or Convertible, including paint options for the car, side mirrors, and roof, plus vinyl graphic packages. Standard equipment is a bit spartan though Bluetooth and USB/iPod integration make the grade, but upgrades like MINI Connected with Apps, a 10-speaker audio system, and navigation can add the near-luxury factor if that's what you're after.

The 2014 MINI Cooper owns its heritage with a fresh, modern take, but its cuteness is undeniable--and may be too much for some.

Balancing retro-cool with modern flair on a knife's edge, the MINI Cooper lineup continues to turn heads and win hearts.

A cute face formed by big, rounded headlights, a seemingly grinning grille, and a snub-nosed hood are the first defining characteristics of the MINI. From there, thing can vary quite a lot: the Clubman is long and understated, while the Coupe and Roadster are short and funky--especially the Coupe's roofline; the standard hatchback is the most classic design, while the convertible takes the look in a decidedly beach-bound direction.

Inside the cabin, a busy, button-and-switches theme is dominant, with curves, circles, steps, and bulges throughout the cabin's structure further adding to the chaos. But it's a chaos that somehow works, even down to the focus on the large speedometer in the center of the dash (which also houses infotainment functions if so equipped). Leather upholstery is available, but cross-check cloth is standard.

Beyond the body-style differentiations, there are also differences in the look as you move from Cooper to Cooper S to John Cooper Works. Each model line gets progressively more aggressive as the sport factor is cranked up; Cooper S models get more functional ducting, less chrome, and more aerodynamic elements front and rear; the John Cooper Works models go even further.

Whatever the standard look of the model you're after, all of the MINI range offers many possibilities for personalization, including a wide array of color combinations (inside and out), as well as vinyl graphics packages. There's even the MINI Yours program, which offers special treaments like two-tone finishes, upgraded leather interior appointments, and more.

For a fun and engaging hatchback (or wagon, or convertible, or coupe) look no further: the 2014 MINI Cooper, especially in S or JCW form, is it.

The standard model uses a 1.6-liter normally aspirated four-cylinder engine rated at 121 horsepower. That's not much, but the base MINI weighs just over 2,500 pounds, so it's still plenty for some pep. The base MINI also gets the best gas mileage of the bunch. Light, comfortable, but still tossable, the standard MINI isn't quite a hot hatch, but it's a fun hatch.

For those with a taste for snappier acceleration, the Cooper S and its 181-horsepower turbocharged version of the 1.6-liter engine might be more attractive. It only loses about 2 mpg for the extra 60 horsepower, and it's a much more engaging drive, especially on a windy back road where you'll enjoy the extra pull out of the corners--corners you can take a bit more aggressively thanks to the upgraded Cooper S suspension. This is the sweet spot of the hot side of MINI.

The John Cooper Works substitutes a 208-horsepower version of the four-cylinder engine and a much stiffer, more performance-oriented suspension. The result is a hot little hatchback that's rewarding and fun to drive hard, though that spirit comes at the cost of a bit of day-to-day comfort. For those seeking every last edge, the MINI Coupe JCW is the fastest of the group, clocking 6.1-second 0-60 mph runs and a 149-mph top speed--with an active spoiler that rises about 50 mph and recedes under 37 mph.

Since the 2013 model year, all three flavors of the MINI range are available with either a six-speed manual (standard) or a six-speed automatic.

All of the MINI models pack the fun and feel of a car that's built for something more than mere transportation--the question is just how much of that sense you're after.

The 2014 MINI Cooper offers good front-row space and comfort, but the back seat is small and ride comfort can be a bit choppy on sportier models.

The MINI Cooper range, is, well, pretty mini. But don't let that make you think it's not well-suited to people of all sizes.

Why? Because it really is, at least in the front row. Head room is very good in all but Coupe and Roadster models, where the lower, sportier roofline does reduce space somewhat. Leg room is great up front in all MINI models, and there's more hip and shoulder room than you'd expect, too. In Cooper Hardtop (hatchback) and Clubman models, there's even a fair amount of cargo space in the back--particularly in the Clubman. Even the standard hatch back offers 23.3 cubic feet with the rear seats folded down.

Convertible, Coupe, and Roadster models of the MINI Cooper are much more limited in overall space, however, as the small trunk of the convertible and the lack of rear seat space in the Coupe and Roadster leave no room for expansion. The rear seats in any model, except the Clubman, are too small to be useful for long trips, but are more than mere vestigial appendages. In the Clubman, the rear seat is actually human-sized, if only just.

The Clubman's center-opening rear hatch and odd three-door passenger entry arrangement make it unique, if a bit unusual at first.

We continue to find ergonomics puzzling in the Cooper and Coupe lineups, and they're clearly cases of fashion over function. Some common-use items are located out of reach, or in odd locations; seat adjusters are on the inboard sides, for instance, and infotainment controls are placed low on the center tunnel. But once you're used to it, these models are quite functional.

Firm-riding and yet comfortable, sporty and practical, the MINI Cooper range provides a fun balance as a daily driver. Wind and road noise can intrude on the cabin experience, however.

The 2014 MINI Cooper's safety scores aren't top-notch, but the handling is, and there's a strong set of standard safety equipment, too.

The 2014 MINI Cooper family hasn't been through crash testing by the safety agencies yet, but the 2013 model earned a mark of "Good" from the Insurance Institute for Highway Safety (IIHS), and "Acceptable" in the side-impact and roof-strength tests. The National Highway Traffic Safety Administration (NHTSA) also gave the 2013 model a five-star rollover rating. The 2014 model is structurally identical to the 2013 model.

Used MINI Cooper for sale near

Personalization is the name of the game with the 2014 MINI Cooper range, but beware its effect on the bottom line.

The features and equipment category is the only one that sees any real change for the 2014 MINI Cooper lineup.

In base form the MINI Cooper is a simple vehicle: standard equipment includes power windows, locks and mirrors; an AM/FM/CD audio system with auxiliary input; ambient lighting; and keyless ignition. Upgrades available include a 10-speaker audio system; a joystick-controlled navigation and infotainment system (itself upgradeable to include Apps capabilities); and of course the packages listed above as well as an abundance of interior and exterior appearance and materials choices.

Light makes right for both fun and gas mileage, and the 2014 MINI Cooper takes full advantage.

The 2014 MINI Cooper range is, on the whole, an example of how well gas mileage and fun-to-drive qualities can be melded when weight and size are kept to their minimums.

The 2014 MINI Cooper offers impressive figures in base form, as high as 29 mpg city and 37 mpg highway with the manual transmission. With the automatic, the base model scores 28 mpg city and 36 mpg highway.

1 Review
5 star
100%
4 star
3 star
2 star
1 star
Rate and Review your car for The Car Connection! Tell us your own ratings for a vehicle you own. Rate your car on Performance, Safety, Features and more.
Write a Review
2014 MINI Cooper 2-Door S