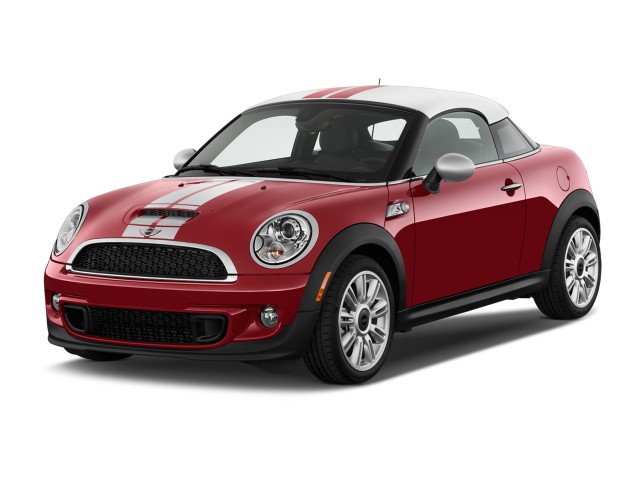 Understand up front that opting for the sportiest John Cooper Works model and outfitting it with all of the latest technology will run the car very close to, if not slightly above, $40,000.

If you're looking for style with a dash of sport and a handful of practicality, the MINI Cooper Coupe is a great choice.

Updated last year with new features and improved engines, the 2012 MINI Cooper soldiers on essentially unchanged. The pint-sized hatchback and convertible still packs plenty of personality, whether you choose the base Cooper, turbocharged Cooper S, or the aggressive John Cooper Works model. Competing with cars bridging the entry-luxury and hot-hatch segment, the MINI Cooper remains a unique choice.

A somewhat smiling face with large headlights, a short, rounded hood, and a flat-top roof combine to form the elemental MINI proportions--and they stay the same for 2012. Despite its tiny exterior cues, the 2012 MINI Cooper is actually quite roomy inside. That space is welcome, both for passenger comfort and for distance from the busy dash and center stack; the MINI is cute, but its interior is busy, particularly if you opt for the MINI Connected system and its included display and joystick control system.

Despite the busy interior look, it's a comfortable place to be--for front seat passengers--with soft seats and plenty of headroom. Materials are not as nice as you might expect given the MINI's price range, with hard plastics dominating the dash and control surfaces. Optional upgrades can spruce up the look and feel of the Cooper's interior, however.

At the core of the MINI Cooper experience, however, is the driving. From the base 121-horsepower, 1.6-liter four-cylinder to the 181-hp turbocharged Cooper S to the 208-hp John Cooper Works, the whole Cooper range is nimble, light, balanced, and entertaining to drive. Steering feel is very good for a front-driver, with minimal torque steer even in the more powerful models. There aren't many cars in the Cooper's class that offer this much fun, and the excitement just grows as you add more power and move up the range. Both the Cooper and Cooper S are available with a choice of six-speed manual or six-speed automatic transmissions, while the JCW is only offered with a stick shift.

Both Cooper and Cooper S models offer very good ride quality in addition to handling well, but the John Cooper Works adds a touch of harshness, a trade-off most will find acceptable for the enhanced performance. Rearward visibility is an issue for all Cooper models, however, as the low seating position and high beltline block sightlines.

Despite the sporty focus, the MINI Cooper is also very fuel efficient, with gas mileage of at least 28/36 mpg (the manual transmission adds 1 mpg to both of those figures) in base trim. The Cooper S uses a bit more fuel at 26/34 mpg (again, the manual adds 1 mpg to each) and the JCW a bit more still at 25/33 mpg. Even the least efficient Cooper is still quite thrifty, thanks in large part to the roughly 2,600-pound curb weight shared through the line.

Light weight and compact dimensions don't stop the MINI Cooper from hauling a good bit of cargo, either. The hatch sports 23.3 cubic feet of space with the rear seats folded down, and even with the seats up there's as pass-through for longer cargo.

Features, options, and configurability are a hallmark of the MINI brand, and the Cooper exemplifies this: a huge array of a la carte and package options are available. Standard features include power accessories, auxiliary input, ambient lighting, and a multifunction keyfob that replaces a traditional key or ignition. Optional upgrades include MINI Connected with Apps capability, a 10-speaker audio system, navigation, Bluetooth, and USB/iPod connections, plus much more. The interior and exterior likewise can be highly personalized to suit the driver's tastes, from custom roof decals to contrasting body/mirror paint and a wide range of vinyl decals. Performance and handling packages are also available to further enhance your MINI Cooper.

The 2012 MINI Cooper's style is unique, with just the right mix of modern and retro, though it may be too cute for some.

The characteristic MINI proportions, with a short nose, flat roof, and retro-referential design elements are all still to be found on the exterior, while inside, the new color options spruce up the quirky, occasionally funky interior design.

As always, the MINI is continues to be one of the most customizable mainstream vehicles available, with a huge array of color combinations, interior choices, and graphics packages for order, enhanced for 2012 by the introduction of the MINI Yours customization program, which offers a new two-tone leather dash and steering wheel, custom alloy wheels, special mirror caps, and unique upholstery patterns.

Fun, nimble, and engaging, the 2012 MINI Cooper is one of the sportiest front-drive cars on the market.

As with the aesthetics, the 2012 MINI Cooper's engine and package range largely carries over from last year. That's a good thing, however, with recently up-rated engines, tweaked handling, and a continued focus on fun.

The base Cooper comes with a 1.6-liter four-cylinder engine rated at 121 horsepower. That's good for some minor pep, but fans of speed will want to upgrade to the Cooper S, which packs a turbocharged 1.6-liter four good for 181 horsepower. The extra 60 horses only come at the expense of 2 mpg city/highway (27/35 mpg in the Cooper S) when outfitted with a manual transmission.

Each step up the Cooper line brings with it crisper suspension tuning and larger alloy wheels as standard equipment, but all Coopers are light, nimble, and ready companions on twisty roads. The ride quality in the Cooper S is hurt somewhat by its standard run-flat tires, while the John Cooper Works model is a bit rougher still.

The 2012 MINI Cooper is best reserved for two adults, with only occasional passengers or small children in the back seat, but it's otherwise a fun and mostly comfortable, if quirky, vehicle.

Despite the MINI's small size, it makes the most of its interior space for front-seat occupants, allowing even tall drivers plenty of leg and headroom. The back seats are marginally useful at best, however.

Materials in the MINI Cooper range are generally good, and can be upgraded to near-luxury levels, but fit and finish occasionally leave a bit to be desired, with squeaks and rattles becoming prominent even during the first year of ownership. Likewise, wind and road noise are above the norm.

Cargo space is fair in the hatch, at 23.3 cubic feet with the rear seats folded down.

Ergonomics are rather interesting in the Cooper, as well, with some common-use items located in out-of-the way places, including seat adjusters on the inboard sides and infotainment controls placed low on the center tunnel, but once you're familiar with these quirks, it's a relatively comfortable, functional environment.

Mediocre test scores put the 2012 MINI Cooper on less-than-stellar ground for safety, but its dynamic handling and standard passive safety features should still instill a sense of ease.

The IIHS scores the 2012 MINI Cooper its top rating of "good" in front-impact crash testing, but only "acceptable" in side impacts. Roof strength likewise receives an "acceptable" score. The NHTSA hasn't fully tested the 2012 Cooper, but gives it a five-star mark for rollover resistance.

Despite the lukewarm scores, the MINI Cooper comes standard with a strong set of safety features, including six airbags, anti-lock brakes, stability control, and hill-start assist.

Optional safety upgrades include xenon headlamps, parking sensors, and run-flat tires (which are standard on the Cooper S).

Used MINI Cooper for sale near

The 2012 MINI Cooper offers a myriad of customization options and upgrades, but beware the bottom line, which can grow rapidly.

Perhaps because MINI and its customers place such an emphasis on customization to suit personal tastes, the base configuration on the Cooper is rather spartan. Standard equipment includes: power windows, locks and mirrors; an AM/FM/CD audio system with auxiliary input; ambient lighting; and keyfob ignition.

Optional upgrades are nearly limitless in terms of appearance and trim, while equipment upgrades include: a 10-speaker stereo; joystick-controlled navigation/infotainment; USB/iPod interface; and Bluetooth phone connectivity.

With a limited set of standard features and a buffet of optional upgrades and personalization, it's easy to run the price tag of the Cooper up well beyond its starting price, however, so buyers should be aware.

Despite its sporty performance and cute appearance, the 2012 MINI Cooper is also an efficient little hatchback--though green-minded buyers will prefer the Cooper S to the JCW.

With its sporty nature, it's easy to forget that the MINI Cooper is also a light, compact, four-cylinder hatchback. It's therefore surprisingly efficient, scoring 29/37 mpg city/highway in base form with the manual transmission. The automatic deducts 1 mpg from both scores.

The Cooper S is also good on the gas mileage, at 27/35 mpg with the manual and 26/34 mpg with the automatic. The John Cooper Works, the most powerful model in the range, rates 25 mpg city and 33 mpg highway.

5 Reviews
5 star
60%
4 star
40%
3 star
2 star
1 star
Rate and Review your car for The Car Connection! Tell us your own ratings for a vehicle you own. Rate your car on Performance, Safety, Features and more.
Write a Review
2012 MINI Cooper 2-Door Coupe

Just picked up my 2012 Mini Cooper Base

I love my 2012 Mini-cooper classic

I lease a 2012 mini cooper classic brand-new, I didn't have any problems in the four years that I leased The car
people found this helpful.
Was this review helpful to you? Yes
2012 MINI Cooper 2-Door Coupe S

Fantastic, what a great car that BMW now owned, I call it my little baby BMW.

Love the look, love the ride, many people comment on it saying what a cute car and we have won many trophies at car shows.
people found this helpful.
Was this review helpful to you? Yes
2012 MINI Cooper 2-Door Coupe S

Great little car with plenty of get up and go!

The Mini Coupe is a two seat roadster with plenty of space inside. Lots of power and great handling. It makes you feel young again!
people found this helpful.
Was this review helpful to you? Yes
For 2012 MINI Cooper

I love my Mini.Great gas mileage,good performance and fun to drive. A little rough riding,but I'm getting used to it..I would buy again
people found this helpful.
Was this review helpful to you? Yes
Browse Used Listings
in your area

8.6
Overall
Expert Rating
Rating breakdown on a scale of 1 to 10?
Compare the 2012 MINI Cooper against the competition
Compare All Cars
Looking for a different year of the MINI Cooper?
Read reviews & get prices
Related Used Listings
Browse used listings in your area