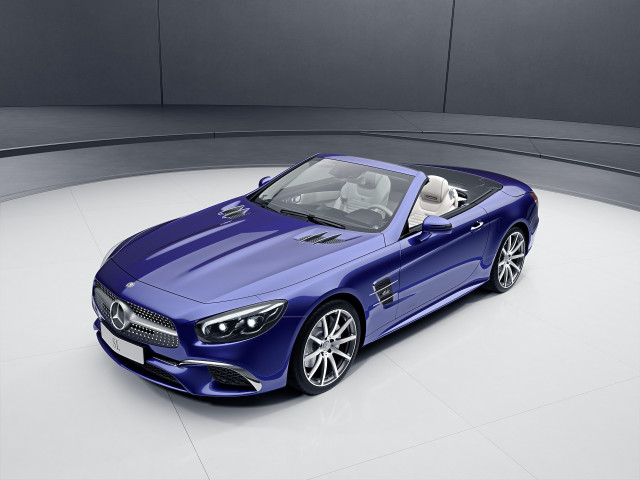 A convertible sports car with a V-6 engine and a $90,000-plus price tag can be hard to justify, but this may be your last chance to get a new Mercedes SL.

The 2020 Mercedes-Benz SL-Class may be the end of the line for the luxury roadster.

The 2020 Mercedes-Benz SL-Class has reached the end of the line, probably. Mercedes calls the 2020 model the final one, though it remains uncertain whether it will replace the two-seat roadster. It’s dithered before, and the SL’s always returned. This time, we’re not so sure, given the success of the AMG GT coupe and coming electric Benzes.

We still love the SL and its boulevardier style. For its sky-high price, first-class interior, and relaxed driving experience, we give it 6.0 out of 10 overall. (Read more about how we rate cars.)

The SL roadster has always had a cult following among a certain type of buyer—golf aficionados and brunch enthusiasts, mostly. This year it gets even more relaxed: The 2020 SL gets a Grand Edition that adds unique paint and wheels, as well as a Designo brown leather interior with diamond quilting. Unfortunately, the rip-roaring SL 63 AMG model is discontinued for 2020, leaving only the standard turbocharged V-6 and V-8 versions. The SL 450 starts at $91,995 and the SL 550 starts at $115,695 after destination charges.

Thanks to Mercedes’s constant design updates, the SL has stayed sharp on the outside with modern headlights and taillights and other details that make the roadster look newer than it is underneath. The interior hasn’t gotten the same overhaul, featuring plenty of knobs and buttons that were common on the last generation of Benz dashboards. Quality is unmatched however, as is the Mercedes-Benz way.

With twin-turbo V-6 power in the SL 450 and an old-school V-8 in the SL 550, the SL-Class offers a tried-and-true grand touring experience, making 362 or 449 hp and reaching 60 mph in less than five seconds in both forms. Though a two-seat roadster, the SL is content to be more comfortable and relaxed than competitors like the Porsche 911 and Aston Martin Vantage, but handling is direct and competent despite lacking a certain engagement.

The 2020 Mercedes-Benz SL-Class seems headed for timeless status, like all its ancestors.

The 2020 Mercedes-Benz SL-Class looks and feels like it’s worth nearly six figures, but we’ve been down this block before, and the passers-by are beginning to notice.

A modern front and rear end help the SL look the part in Mercedes’s current vehicle lineup, but this roadster has been around in its current form since 2012. It’s still handsome, inside and out, but particularly in the cabin, the SL’s age is beginning to show. The dash is dotted with numerous buttons and knobs, not to mention a finicky infotainment screen that’s operated by a dial.

Still, there’s no denying the presence of a long, sleek roadster with trademark Benz details, and on that front the SL nails it. It’s timeless in its design and execution and will be missed from the stable after 2020.

The 2020 Mercedes-Benz SL-Class is less exciting than competitors, but nearly unmatched in terms of comfort.

The 2020 Mercedes-Benz SL-Class offers two potent engines, now that the powerful AMG version has met its demise. A V-6 sports car that costs over $90,000 may sound tough to justify, no matter the badge on the front, but both SLs have confident handling and strong acceleration.

We give it an 8 for performance, with two extra points for powertrains and one for its commendable ride. (Read more about how we rate cars.)

The SL 450 features a turbocharged V-6 that makes 362 horsepower and 369 pound-feet of torque. That’s good for a 0-60 mph time of just under five seconds and a top speed electronically limited to 155 mph. The SL 550 swaps the boosted 6-cylinder for a naturally aspirated V-8 with a great noise and plenty of power. At 449 hp and 516 lb-ft, it’s capable of 0-60 mph in 4.3 seconds, and feels better-suited to a large luxury roadster than the V-6. At over $20,000 more, however, we’re not sure it’s worth the price of entry. Both cars get a 9-speed automatic transmission as the only option.

Non-AMG SL models have always been geared more towards comfort than dynamics, and such is the case with the 2020 SL. Standard active dampers on the suspension make for a smooth and quiet ride, and while the handling is direct and responsive, other two-seat sports cars are much more engaging to drive on twisty roads.

The 2020 Mercedes-Benz SL-Class is low on space and practicality but delivers on comfort and fine materials.

The 2020 Mercedes-Benz SL-Class is a weekend warrior for two people and not much of their stuff. We give it 4 out of 10 here: It earns extra points for front seats and interior quality, and gives them back for utility and trunk space. (Read more about how we rate cars.)

At over 100 inches long between the wheels, the SL-Class dedicates shockingly little of that space to passengers. While leg room is decent, the SL is by no means roomy inside. Instead, it uses its considerable length more for styling than space. The trunk is small as you’d expect, with 13.5 cubic feet dropping to 8.5 cubes with the large hard top folded down.

Of course, you don’t buy an SL for practicality, and in terms of quality, this two-seat roadster is nearly second to none. Everywhere you look and touch is swathed in leather, soft-touch materials, real wood and metal, and even high-quality plastics, and in higher-spec form the SL is first-class in terms of fit and finish.

The 2020 Mercedes-Benz SL-Class has not been crash-tested, so we’re unable to give it a full score here. (Read more about how we rate cars.)

However, the SL does come with plenty in the way of standard and optional active safety equipment. Standard safety features include automatic emergency braking, active head restraints, pop-up roll bars, and LED daytime running lights. Blind-spot monitors, adaptive cruise control, forward collision warnings, and active lane control can all be had, but on a six-figure car, they should really all be standard.

The 2020 Mercedes-Benz SL-Class is well-equipped as you’d expect from a near six-figure sports car, but not as good value as competitors.

The 2020 Mercedes-Benz SL-Class is as well-equipped as you’d expect from a big, premium roadster, but its age keeps it from some of the more desirable new technology. We give it 7 out of 10 here, with a few extra points for standard and optional features and infotainment, with one deducted for value. (Read more about how we rate cars.)

As standard, the SL gets a retractable hard top with a glass roof, ambient lighting, LED headlights and taillights, automatic emergency braking, a Harman/Kardon stereo system, and a 7.0-inch dial-controlled infotainment screen with Apple CarPlay and Android Auto. The SL 550 gets the Airscarf neck warmer system in both the driver and passenger seats.

For 2020, the SL gets a Grand Edition to celebrate its final model year, which includes a unique gray paint and dark brown Designo interior combination, as well as staggered 19- and 20-inch AMG wheels.

At around $92,000 to start, the SL-Class is relatively well-equipped, but its 4-year/50,000-mile warranty is average, and it’s difficult to call a two-seat roadster a value, no matter how well-assembled or powerful or prestigious it may be.

The 2020 Mercedes-Benz SL-Class Isn’t particularly efficient, but nears 30 mpg on the highway in V-6 form.

The 2020 Mercedes-Benz SL-Class isn’t necessarily efficient, but you wouldn’t expect a high-powered luxury sports car to be. We give it 4 out of 10 as such. (Read more about how we rate cars.)

1 Review
5 star
4 star
100%
3 star
2 star
1 star
Rate and Review your car for The Car Connection! Tell us your own ratings for a vehicle you own. Rate your car on Performance, Safety, Features and more.
Write a Review
2020 Mercedes-Benz SL Class SL 450 Roadster

WAY better than you think!

Trim
See Your Price
6.0
Overall
Expert Rating
Rating breakdown on a scale of 1 to 10?
Compare the 2020 Mercedes-Benz SL Class against the competition
Compare All Cars
Looking for a different year of the Mercedes-Benz SL Class?
Read reviews & get prices
Related Used Listings
Browse used listings in your area
See More Used