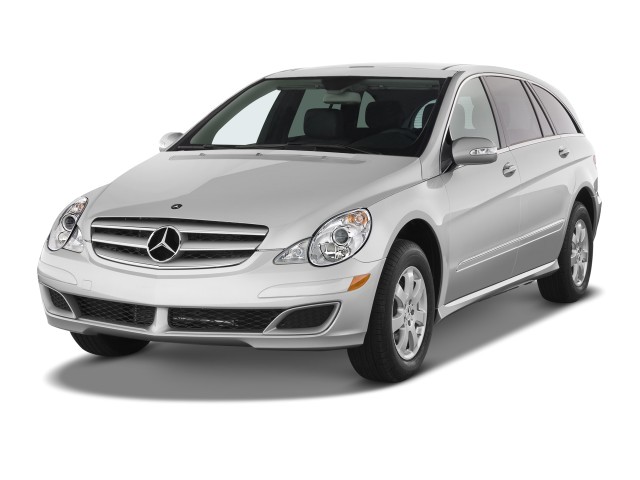 The 2008 Mercedes-Benz R-Class has not been popular as a new vehicle, and will probably be even less popular as a used car. Experts from TheCarConnection.com suggest you research this model's depreciation before your sign any papers.

If you seek a supremely comfortable people hauler but eschew traditional station wagons, minivans, and SUVs, the 2008 Mercedes-Benz R-Class may be for you.

The Mercedes-Benz R-Class has been a curiosity since its 2006 introduction. To many, it was clearly a station wagon. To others, it was a minivan variant. At its introduction, Mercedes-Benz sternly referred to its product as a segment-creating Sport Tourer SUV. The reasoning was that back then, the 2008 Mercedes-Benz R-Class, as it still does today, shared many components with the M-Class SUV. The 2008 R-Class is also manufactured at the same facility as the M- and GL-Class SUVs.

It doesn't matter what you call the 2008 Mercedes-Benz R-Class. What does matter is how this people hauler performs its duties. It is the opinion of some editors from TheCarConnection.com that there might not be a better way to move six people from point A to point B than the 2008 R-Class.

Comfortable, full-size seats are arranged in a 2+2+2 fashion. Huge rear doors and simple-to-operate second-row seats make access to the third row easy. However, because of their length, those rear doors are also difficult to open in crowded parking lots.

If you own a 2008 Mercedes-Benz R-Class, you won't have any trouble finding your car in said parking lot. However, you may have a hard time looking at it. Its roofline, while practical, isn't beautiful. The low, aerodynamic nose is also graceless, and the Mercedes-Benz grille is forced to fit between large headlight units.

The good news is that when you're behind the wheel, you can't look at the exterior. Driving the 2008 Mercedes-Benz R-Class is a sedate, calm, and quiet pleasure. The 2008 R320 diesel is a long-distance marathoner: It can run upward of 500 miles on a tank, securely devouring interstate at impressive rates in virtually any weather. (Should you encounter many inches of snow, the air suspension is capable of lifting the body to provide additional ground clearance.) The R-Class doesn't like to be rushed, though. Its 5,000-pound curb weight and slow steering don't encourage hooliganistic driving.

The expensive V-8-powered R63 AMG and R500 models have been dropped for 2008. Sales efforts now focus on reasonably priced V-6-powered gasoline and diesel 2008 R-Class models. The base rear-wheel-drive R350 is the most affordable R-Class, starting in the low-$40,000 range.

A new seven-speed automatic transmission with TouchShift capability backs both engines. The 3.5-liter gasoline V-6 produces 268 horsepower, while the turbocharged 3.0-liter direct-injected diesel produces better performance from its 215 horsepower. The diesel difference is the engine's torque, which is a V-8-like 398 pound-feet.

As one would expect from a Mercedes-Benz, the 2008 R-Class is very well equipped. Beyond expected convenience, leather-covered everything, and luxury features (check out the available gigantic sunroof), four-wheel anti-lock disc brakes are included, as is stability control. Side-curtain airbags are included and span all three seating rows—and a rollover sensor can deploy the seatbelt tensioners and the curtain airbags if the vehicle senses that a rollover is about to occur.

Another alternative is the Cadillac Escalade. While flashier than the 2008 Mercedes-Benz R-Class, these vehicles run close to parallel in terms of luxury. The Escalade's passenger accommodations are also top-flight, but now that all R-Class models are V-6 powered, the Escalade easily outmuscles the Benz.

The 2008 Mercedes-Benz R-Class may be more functional than beautiful.

Most sources consulted at TheCarConnection.com are not overly impressed with the 2008 Mercedes-Benz R-Class styling cues.

Cars and Driver praises the "sensuous curves" that define this Mercedes-Benz 2008; Cars.com points out that the Mercedes-Benz R-Class "front and rear design cues are modeled after Mercedes-Benz coupes and sedans," adding that "rounded and squat at the rear, the [Mercedes-Benz] R-Class flaunts a relatively long profile." The Kelley Blue Book reviewer sums it up best, stating "you may think it's a minivan or an SUV, but there's one thing of which you will have no doubt: with its prominent grille and nameplate branding you'll know it's a Mercedes-Benz." Edmunds, however, picks up on a theme TheCarConnection.com’s editors hear repeatedly in connection with the R-Class: “in black, the R-Class looks funereal.”

Car and Driver is similarly succinct regarding this Mercedes-Benz 2008 cabin, describing it as a "sumptuous interior"; Edmunds avers "the interior of the 2008 Mercedes-Benz R-Class is both posh and functional." Cars.com dishes the details on the Mercedes-Benz R-Class cabin: "the seats have leather inserts, and brown bird's-eye maple wood trims the doors, dashboard and center console...the upper section of the two-tone dashboard arches over the instrument cluster, which holds two cylindrical binnacles for the speedometer and tachometer."

The 2008 Mercedes-Benz R-Class is more of a workhorse than a thoroughbred.

Reviews seen at TheCarConnection.com indicate respect, if not admiration, for 2008 Mercedes-Benz R-Class performance.

Edmunds reports that Mercedes-Benz R-Class buyers have a choice between "a pair of eminently capable but relatively uninspiring power plants," which according to Cars.com are "a 3.5-liter V-6 in the R350 [that] develops 268 horsepower and 258 pounds-feet of torque," and the turbodiesel R320 CDI, which "produces 221 hp and 398 pounds-feet of torque." In the opinion of ConsumerGuide, the latter Mercedes-Benz 2008 engine "suffers brief turbo lag, then accelerates quickly."

Cars.com states that both Mercedes-Benz R-Class engines "team with a seven-speed automatic," which "is able to skip as many as three gear ratios during downshifts to get the transmission in the proper gear." Kelley Blue Book remarks that it delivers "seamless shifts, always finding just the right gear when needed," but ConsumerGuide testers find that "the transmission in one test model periodically suffered jerky gear changes at low speed."

Car and Driver reports that the 2008 Mercedes-Benz R-Class offers "competent handling that no one could call sporty"; they say it "feels remarkably agile, [and] the AMG-tuned suspension is firm without being too harsh," noting that the "steering has a heft to it that serves as a reminder of the mass being hustled around." Cars.com claims that Mercedes-Benz 2008 "steering feels just right for this new class of car, and it requires moderate effort with utterly satisfying response," and ConsumerGuide attests it "acts more like a station wagon than an SUV," adding that "the steering is impressively linear and accurate, though some drivers may prefer a weightier feel." For those concerned with braking power, Kelley Blue Book proclaims that stopping the Mercedes-Benz R-Class "is...no problem with its 13.8-inch front brake rotors and standard ABS and Brake Assist features."

The 2008 Mercedes-Benz R-Class is a good choice for luxurious mass transportation.

There's no shortage of passenger or cargo room inside the 2008 Mercedes-Benz R-Class.

This is the conclusion reached by most reviews seen at TheCarConnection.com. Cars.com reports that the Mercedes-Benz R-Class seats up to seven "courtesy of three pairs of seats [that] offer magisterial comfort and support, are wholly adjustable to suit one's physique, and remain appealing even after hours of driving." ConsumerGuide assures potential buyers that "six-footers have abundant 2nd-row headroom and knee space, plus adequate under seat foot space...seats blend fine support with soft padding." Edmunds warns that the Mercedes-Benz 2008 "new seventh-seat option, however, is a mixed bag...the extra seat does add to the R-Class' versatility, [but] encroaches on third-row knee room when in use and a too-narrow width for adult frames...it makes for a questionable addition."

Kelley Blue Book says "the interior of the 2008 Mercedes-Benz R-Class feels more like a family room than a car," due to "the panoramic sunroof that spans nearly the entire length of the vehicle." ConsumerGuide adds its "cabin design is the expected blend of rich, textured plastics, soft-touch surfaces, and high-quality materials."

Having a quiet conversation while on the road in the Mercedes-Benz R-Class is highly doable: "just a touch of driveline and road sound is evident, but the engine is nearly silent unless pushed hard," according to Cars.com, although ConsumerGuide notes that "the R320 CDI's diesel engine sounds louder here than in the E-Class sedan or M-Class SUV, with clatter that's intrusive during acceleration and noticeable at idle and in cruising."

If safety is a priority, the 2008 Mercedes-Benz R-Class is a good choice, though a final verdict awaits crash-test results.

Like most Mercedes vehicles reviewed by TheCarConnection.com and other automotive sites, the 2008 Mercedes-Benz R-Class offers superior levels of safety gear.

However, neither the National Highway Traffic Safety Administration (NHTSA) nor the Insurance Institute for Highway Safety (IIHS) has crash-tested the vehicle.

Cars.com expresses some concern over Mercedes-Benz R-Class visibility issues: "a nest of headrests impairs the rearward view, which is otherwise OK and helped by ample mirrors...reflections are evident in the steep windshield, but they're not too distracting." Edmunds, on the other hand, reports that the 2008 Mercedes-Benz R-Class' "steeply raked windshield affords excellent sight lines."

The 2008 Mercedes-Benz R-Class can be outfitted quite lavishly—and expensively.

Auto experts at TheCarConnection.com note no shortage of extra equipment for the 2008 Mercedes-Benz R-Class.

According to Cars.com, "privacy glass is standard" in every Mercedes-Benz R-Class, and "a single-lift tailgate is installed...weather-band reception is included in the standard radio, which has a single-CD slot and controls for optional satellite radio," while "an auxiliary plug in the glove box connects to MP3 players." Edmunds adds the following as standard 2008 Mercedes-Benz R-Class luxury equipment: "power front seats, easy fold-down second- and third-row seats, eight-speaker audio system with auxiliary audio input and a retractable cargo cover." Oddly, the standard upholstery on the R-Class is vinyl; leather is optional.

Kelley Blue Book reports "options abound on the [Mercedes-Benz] R-Class." Options for this Mercedes-Benz 2008 model are indeed plentiful, but pricey; Car and Driver recommends that consumers "be careful when cruising the long list of optional temptations."

According to Cars.com, these temptations include "optional flat-screen monitors built into the back of the front head restraints [that] can provide entertainment for rear passengers." Edmunds notes that "most desirable [Mercedes-Benz R-Class] options are rolled into pricey packages, although a handful can be selected a la carte...available [Mercedes-Benz 2008] accoutrements include a panoramic glass sunroof, 19- or 20-inch wheels, Bluetooth, keyless ignition, heated seats and steering wheel, a power rear liftgate, three-zone climate control, a rear-seat entertainment system, adaptive cruise control, and glovebox-mounted six-CD changer and dedicated iPod interface."

Be the first one to write a review on 2008 Mercedes-Benz R Class
Rate and Review your car for The Car Connection! Tell us your own ratings for a vehicle you own. Rate your car on Performance, Safety, Features and more.
Write a Review
USED PRICE RANGE
$5,998 - $7,257
Browse Used Listings
in your area

8.2
Overall
Expert Rating
Rating breakdown on a scale of 1 to 10?
Compare the 2008 Mercedes-Benz R Class against the competition
Compare All Cars
Looking for a different year of the Mercedes-Benz R Class?
Read reviews & get prices
Related Used Listings
Browse used listings in your area
See More Used