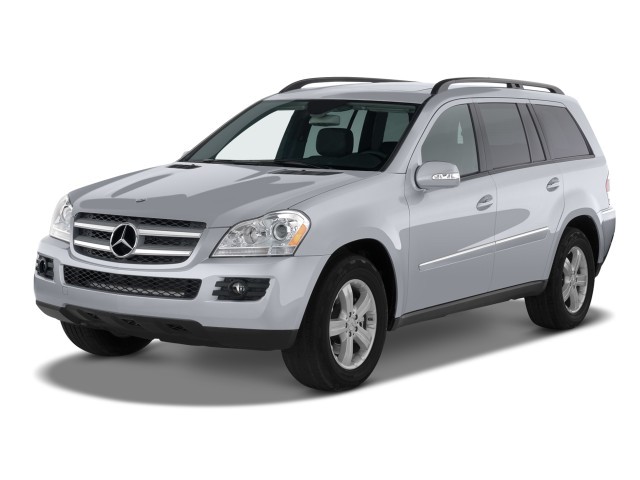 The base versions of the Mercedes-Benz GL come with vinyl upholstery. Spend the extra money to get the better-finished leather interiors. For drivers with the need to trek as well as commute, the off-road package on the GL-Class gives it serious trail-riding credentials; the GL-Class was initially developed as a replacement for Mercedes's G-Class military vehicle, and this package comes closest to the G-Class in traction.

The 2008 Mercedes-Benz GL-Class is a superior sport-ute with lots of room and power.

TheCarConnection.com’s editors researched a wide range of road tests of the 2008 Mercedes-Benz GL-Class to write this definitive review. TheCarConnection.com’s resident experts also drove the Mercedes-Benz GL-Class to help you decide which reviews to trust where opinions differ, and to add more impressions and details and provide you with the best information.

New in 2007, the 2008 Mercedes-Benz GL-Class sport-utility vehicle is a terrific, and terrifically expensive, sport-ute with three rows of seating, a pleasingly crisp shape, a luxurious interior, and real off-road capability.

Handling is very well balanced in this full-size sport-utility vehicle. The air suspension is damped with ride comfort in mind, but the Mercedes-Benz GL still steers with precision and has strong brakes. A little less rocking motion side to side would improve on the good on- and off-road manners. In terms of off-road gear, the GL has standard four-wheel drive, Hill Start Assist, Hill Descent Control, and a load-leveling suspension system. It can be ordered with an Off-Road package that includes Class IV hitch, adaptive-damping suspension system, underbody skid plates, and locking differentials. Its maximum tow rating is 7,500 pounds.

The tailored cabin has front-row seats with loads of foot and shoulder room. Adults will be comfortable in the second row--and even in the third row, which also folds itself out of sight at the touch of a button. Other features power rear tailgate, rain-sensing wipers, multizone climate control, a DVD navigation system, a DVD rear-seat entertainment system, 19-inch wheels, adaptive cruise control, and an upgraded surround-sound audio system.

First- and second row-side-impact and full-row curtain airbags are standard, as are stability control, anti-lock brakes with Brake Assist, and active headrests designed to limit potential injuries from whiplash.

The 2008 Mercedes-Benz GL-Class stands out with its muscular but refined style and well-designed interior.

The 2008 Mercedes-Benz GL-Class combines a squared-off, rugged exterior with an interior that earns the praise of most reviewers consulted by TheCarConnection.com.

Car and Driver says the GL-Class shares very little with the M-Class SUV, though they’re built on the same platform. “The only shared sheetmetal is the front doors. The GL's styling is more conservative, with a tall, broad profile and much softer shapes than the ML's creases.” The Detroit News thinks “the Mercedes SUV is handsome…with triangular headlights, sharply chiseled front fenders and classic luxury SUV lines.” Cars.com calls the 2008 GL-Class “a work of sculpted muscularity,” with "a raked hood imparts a sporty appearance that is augmented by the muscular flared wheel arches."

At Mercedes-Benz, 2008 brings a new GL-Class with a V-8 and a style all its own, and reviews approved of its appearance, too. ConsumerGuideAuto likes the Mercedes-Benz GL550’s "unique front-end experience, flared fenders, 21-inch wheels, and chrome exterior accents." In contrast, Cars.com notes "less expensive GLs have 18- or 19-inch wheels."

The interior of the 2008 Mercedes-Benz GL-Class wins kudos from test drivers, too. ConsumerGuideAuto finds "high-quality materials, including standard real-wood trim, give the cabin a premium feel..." and adds "[while] most controls are logically placed...some have cryptic markings." Car and Driver differs: “the controls are mostly familiar, with two large gauge pods straight ahead, the same four-spoke steering wheel, and a familiar center stack.” The Detroit News concurs with most opinions, describing the cabin as “rugged-looking…[with] lots of updated materials, such as matte metal.”

The 2008 Mercedes-Benz GL-Class combines the capabilities of an all-terrain SUV with the power, ride, and handling of a luxury sedan.

The 2008 Mercedes-Benz GL-Class utes are powerful, good-handling premium SUVs and, if you opt for the GL320 CDI, offer relatively good fuel economy.

Edmunds.com thinks that in the 2008 Mercedes-Benz GL-Class, the GL550 “has the power to nip at the heels of more sporting luxury utes like the Range Rover Supercharged." ConsumerGuideAuto adds, "while the GL 550 has more punch, the GL 450 is plenty strong for any task." When it comes to the diesel engine, Edmunds.com observes that the GL320 "isn't nearly as quick as the GL 450," but it "provides massive low-end response and superior fuel mileage versus its gasoline counterparts."
ConsumerGuide finds it's "slightly lethargic off the line," but Car and Driver calls the turbodiesel "an impressive powerplant."

All 2008 Mercedes-Benz GL-Class models are equipped with seven-speed automatics and Mercedes's 4MATIC full-time four-wheel-drive system. In reviews read by TheCarConnection.com, praise is lavished on the transmission. Cars.com finds "Gear hunting is minimal...shorter ratios for each gear allow quick, confident bursts of power." Car and Driver puts it "at the top of the charts for seamless operation." All models are capable of towing up to 7,500 pounds.

For the 2008 Mercedes-Benz GL450, an off-road package that can, according to Cars.com, "raise the air suspension to yield 12 inches of ground clearance–[two more] than a HUMMER H2's." Car and Driver feels the GL "ride quality is creamy, surprisingly so for a vehicle that's extraordinarily responsive by large-SUV standards." All models are equipped with air suspension that balances load forces while the off-road package employs additional active damping. Conversely for Mercedes-Benz, 2008’s top-line GL550 is equipped with low-profile tires that Cars.com says gives it a "brittle ride quality [in that] you'll hear and feel every highway expansion joint, while potholes and speed bumps become a jarring, noisy experience."

Handling is found to be better than expected for a vehicle as large and heavy as the Mercedes-Benz GL-Class. As Kelley Blue Book explains, "Mercedes-Benz builds the GL-class using a unitized body and chassis. This offers...less weight, a lower canter of gravity, and...a more car-like ride." Steering performance is good: "The steering wheel's precise turn-in makes curvy roads a pleasure to drive," writes Cars.com, and "at 39.7 feet, the GL's turning circle is competitive with its peers."

TheCarConnection.com’s editors choose the Mercedes-Benz 2008 GL-Class as one of the best in the full-size SUV class. Handling is very well balanced; the air suspension is damped with ride comfort in mind, but the Mercedes-Benz 2008 GL-Class still steers with precision and has strong brakes. A little less rocking motion side to side would improve on the good on- and off-road manners, though.

While not perfect, the 2008 Mercedes-Benz GL-Class boasts comfortable seating for seven. Strangely, it has standard vinyl seats.

The 2008 Mercedes-Benz GL-Class seats seven in relative luxury, and available amenities leave little to be desired. There are some minor areas that need improvement, however.

All 2008 Mercedes-Benz GL-Class SUVs seat seven in a 2-3-2 configuration. While the GL550 edition gets standard leather seats, the GL320 and GL450 come with vinyl seats, and leather is an option. It’s an unusual omission in a vehicle that’s pitched against the Land Rover Range Rover.

In reviews read by TheCarConnection.com, seat comfort opinions are mixed: Cars.com feels "the seats are too stiff," while ConsumerGuideAuto thinks "the seats are supportive and generously sized" and Kelley Blue Book calls them "well-shaped and supportive."

Regarding driver area comfort and quality in the 2008 Mercedes-Benz GL-Class, Kelley Blue Book "remain[s] undecided regarding the shift lever being mounted to the steering column; it...is less-than-intuitive in its operation." Cars.com likes that the "wraparound dash and narrower seats could pass for those in a luxury sedan" and "the center controls look and feel high-quality," but adds "Mercedes' COMAND interface...is an earlier generation with second-rate graphics."

In the 2008 Mercedes-Benz GL-Class, Mercedes-Benz has designed a third row that is more comfortable than the competition. Cars.com describes it thusly: "the third row shines. Legroom and headroom are leagues better than the others', and the GL's seats sit high enough that passengers aren't watching their knees." The GL550's third row "boasts reading lights, overhead A/C vents, a fixed skylight and leather-wrapped armrests." Edmunds.com appreciates that "third-row access is also well thought-out." Consumer Guide Auto notes, "only the right-side section of the second row slides forward for third row access, though it does create a large passageway." Finally, Cars.com says the third row "folds more or less flat, as does the second row, and the resulting load floor is free of any major gaps." Cargo volume "trails some of the GL's boxiest competitors [at 83.3 cubic feet]."

Some reviewers griped about the small details, though. The Detroit News says, “the third row has ridiculously small cupholders that you can't adjust. You load the DVDs for the entertainment system into a slot located under the right passenger's seat in the second row. And some of the seat controls are located in a panel that juts out from the bottoms of the front seats.”

Cars.com points out that Mercedes-Benz "touts the presence of cupholders designed to withstand the mass of 44 oz. drinks." Good to know, if that's important to you. Thoughtful touches include leather-wrapped upper dash surfaces and "nearly every surface is soft to the touch, including areas...knees might knock against." Still, Cars.com found two unsightly fit and finish gaps: "one around the glove compartment, the other bordering the steering wheel hub." They also noted that "staffers...thought the tiny side mirrors were a joke."

On the road, "the GL is exceptionally quiet," feels Car and Driver. The same sentiment is shared by Edmunds.com, which writes, "[it's] quiet on the highway, with minimal wind and road noise."

The 2008 Mercedes-Benz GL-Class has comprehensive safety gear, but hasn’t been tested yet.

The 2008 Mercedes-Benz GL-Class features many safety features as standard, but neither the National Highway Traffic Safety Administration (NHTSA) nor the Insurance Institute for Highway Safety (IIHS) has tested its crash performance to date.

For those with small children, LATCH child seat anchors are located on the outboard seats of the second and third rows.

If price is no object, the 2008 Mercedes-Benz GL-Class offers features to satisfy the most options-hungry buyer.

All 2008 Mercedes-Benz GL-Class utes are outfitted with a lengthy list of standard features and options that can push the SUV’s price well beyond $80,000.

Mercedes’s 2008 GL550 offers all of the above and adds bigger wheels, unique front-end styling, and running boards.

There are four optional equipment packages for the two lesser-model GLs. Edmunds says they include features like memory seats, a power liftgate, a navigation system with rearview camera, a Harman Kardon Logic7 sound system with Sirius, three-zone climate control, and a heated steering wheel.

Other features include rain-sensing wipers, a DVD rear-seat entertainment system, 19-inch wheels, and adaptive cruise control. Unique to the GL450 is the Off-Road Package.

Be the first one to write a review on 2008 Mercedes-Benz GL Class
Rate and Review your car for The Car Connection! Tell us your own ratings for a vehicle you own. Rate your car on Performance, Safety, Features and more.
Write a Review
USED PRICE RANGE
$8,440 - $19,140
Browse Used Listings
in your area