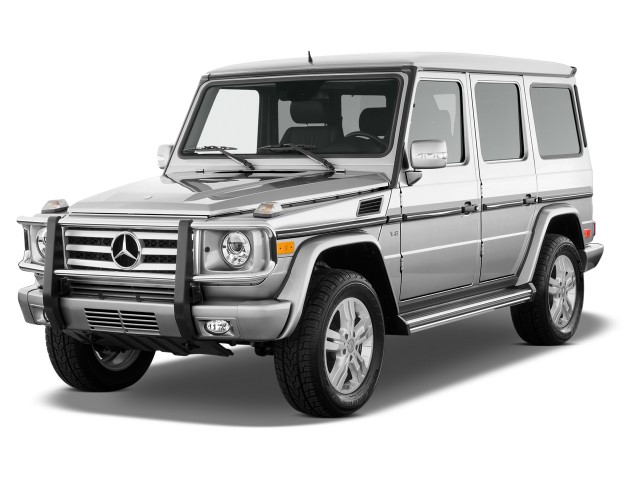 This is the last year to get a G-Class, so if you've been putting off the purchase--or just think you might want one soon--it's time to act.

The 2012 Mercedes-Benz G-Class is nearly in a class by itself thanks to its unique, and essentially archaic, design, but it does what it does very, very well--for a price.

Though it's soon on the way out, the military-inspired and highly luxurious Mercedes-Benz G-Class soldiers on for 2012. Having completed over 30 years on sale with minimal structural changes, it's not surprising Mercedes has decided to move on, but the G-Class will be missed.

For 2012, the square, body-on-frame G-Class comes in just one trim: the G550. Powered by a 5.5-liter V-8 engine rated at 382 horsepower and 391 pound-feet of torque, the G550 is quick despite its bulk, accelerating to 60 mph in just eight seconds. A seven-speed automatic transmission with manual shift capability handles the gear changes smoothly. Fuel economy, however, is as archaic is its underpinnings: just 12 mpg city and 15 mpg highway for 13 mpg combined.

With the solid-axle, 4MATIC four-wheel-drive, go-anywhere attitude of the G-Class, however, gas mileage will be at the back of your mind. In fact, if you can afford its $105,750 base price, you probably won't be worried about the cost of fuel at all.

Comfort and ride quality are generally very good in the 2012 G550, with ample room for people and cargo in its boxy outlines. On-road handling is mediocre, at best, thanks to its primitive suspension design and high center of gravity, but it shines off-road, besting all but dedicated dirt vehicles despite its bevy of luxury features.

Despite being one of the most expensive SUVs on the market, the G-Class delivers luxury and capability that rival the Land Rover Range Rover--its only real competition. A range of special edition models, including the "Edition Select" mark the final model year for the G-Class.

Standard equipment on the G550 includes COMAND navigation and infotainment with voice control, Bluetooth hands-free calling, an in-dash SD card reader, walnut trim, leather upholstery, dual-zone climate control and much, much more. In fact, it's so fully equipped, there are no upgrades or options available.

Like most very high-end luxury vehicles, the G-Class doesn't have any official crash test data, but it comes with all of the standard modern safety features you'd expect, including anti-lock brakes, brake assist, a full complement of airbags, and a rearview camera.

Be the first one to write a review on 2012 Mercedes-Benz G Class
Rate and Review your car for The Car Connection! Tell us your own ratings for a vehicle you own. Rate your car on Performance, Safety, Features and more.
Write a Review
USED PRICE RANGE
$59,995 - $64,292
Browse Used Listings
in your area
7.4
Overall
Expert Rating
Rating breakdown on a scale of 1 to 10?
Compare the 2012 Mercedes-Benz G Class against the competition
Compare All Cars
Looking for a different year of the Mercedes-Benz G Class?
Read reviews & get prices
Related Used Listings
Browse used listings in your area
See More Used