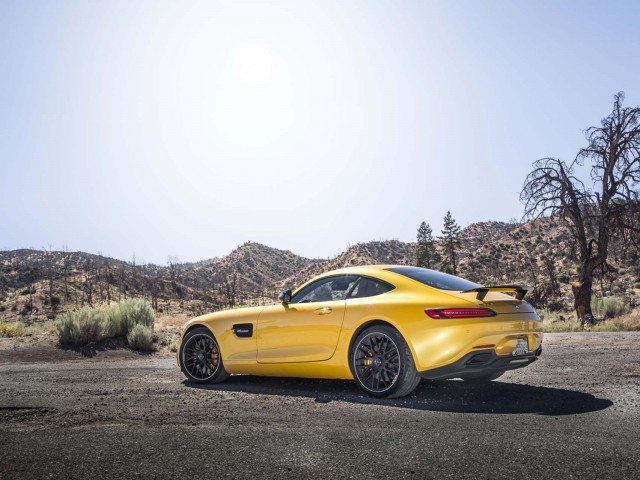 Looking for the fastest possible ride? Next year's AMG GT R will top the GT S in top speed, performance, with the same breathtaking style.

The 2017 Mercedes-AMG GT adds a few goodies this year before adding two new models to the lineup next year.

We live in exciting times. Look no further for proof than the current crop of supercars on the market from well-established automotive brands, all within (reasonable) reach of many buyers.

The 2017 Mercedes-AMG GT is proof enough.

Before you scoff at the opening price of $112,195 for a GT or $132,195 for a GT S, consider the following: Its prodigious power and impressive acceleration would have cost double or triple that price less than a decade ago. The spiritual predecessor to the GT S could be the Mercedes-Benz SLR McLaren, which also had a hand-built V-8 and 0-60 mph times less than four seconds, but cost $495,000 to start. It's all relative, we suppose.

The Mercedes-AMG GT nets an 8.5 overall on our scale, which indicates our reverence at the supreme altar of speed.

In terms of design, the Mercedes-AMG GT is a bold move squarely aimed at the Porsche 911.

That’s not to say the sleek, stylish lines don’t pay homage to the incumbent; on the contrary. There are hints of the 911 throughout the AMG GT’s exterior design, but most especially at the rear, where the thing, semi-crescent tail lights and smooth, round forms produce a definite hint of the thing to be left, well…behind. At the nose, and from the side, however, there’s much more to remind the viewer of the previous SLS, the qullwinged predecessor of this very similar yet very different car.

Under the hood, a twin billing of 4.0-liter twin-turbocharged V-8 engines are available. In base GT application, the engine makes 456 horsepower and 443 pound-feet of torque. The top GT S boasts 503 hp and 479 lb-ft on tap, the GT engine is about 80 hp less powerful than the previous 6.2-liter V-8 found in the SLS, but thanks to the turbochargers, there’s more torque on demand just about everywhere across the rev range.

Add to the shorter, stiffer platform of the AMG GT the new dynamic engine and driveline mounts found with the Dynamic Plus Pack on GT S models, and you have the most impressive handling to be found in an AMG car to date. In fact, you have handling that’s capable of rivaling the current Porsche 911. And with the AMG GT’s hydraulic steering, the feel and finesse gets a nod in the Mercedes’ favor.

This year the AMG GT is available only in GT or GT S form. Next year a GT R and GT C join the fray, offering more performance or a drop top, respectively.

There's a lot to admire inside the Mercedes-AMG GT except there's not a lot of it. There's a snug cockpit for the driver, and a cozier compartment for the passenger, but there's no back seat to sniff at. Nope. Not even the vestigial nubs of the 911. The Mercedes material, design, and quality are top-notch, however, with premium leathers, real metals, and top-tier plastics all making appearances.

Base coupes are fitted with mostly good standard equipment for a car starting well over six figures. The AMG GT is fitted with staggered 19- and 20-inch wheels, front to back, 7.0-inch infotainment, rearview camera, forward collision warning with automatic emergency braking, AMG performance seats, keyless ignition, leatherette seats (in GT). Carbon fiber inside and out predictably raises the bottom line by thousands, AMG Dynamic Plus packages unlock the car's performance even further.

For more details on the Mercedes-AMG GT S, including its driving characteristics and more, visit our first drive report at Motor Authority.

Be the first one to write a review on 2017 Mercedes-Benz AMG GT
Rate and Review your car for The Car Connection! Tell us your own ratings for a vehicle you own. Rate your car on Performance, Safety, Features and more.
Write a Review
USED PRICE RANGE
$84,500 - $101,987
Browse Used Listings
in your area

8.5
Overall
Expert Rating
Rating breakdown on a scale of 1 to 10?
Compare the 2017 Mercedes-Benz AMG GT against the competition
Compare All Cars
Looking for a different year of the Mercedes-Benz AMG GT?
Read reviews & get prices
Related Used Listings
Browse used listings in your area