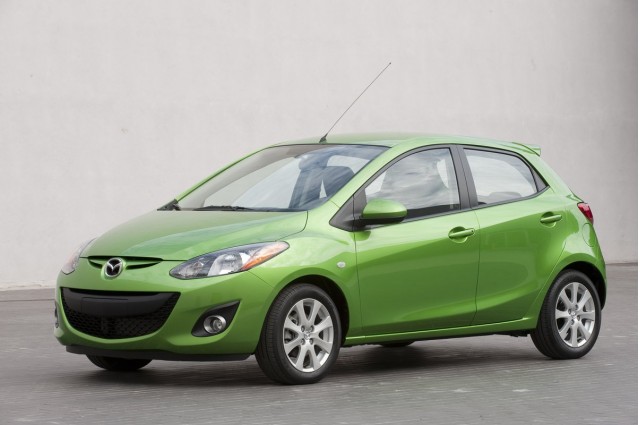 There's no Mazda2 sedan; but for only a bit more money, you can get a somewhat larger 2013 Mazda3i, in base form.

The 2013 Mazda2 stands out among entry-level hatchbacks due to its zippy driving feel and good real-world mileage--although the limited feature set and basic appointments won't appeal to everyone.

The 2013 Mazda2 certainly won't suit everyone who's shopping for an fuel-efficient subcompact. Firstly, the Mazda2 is only offered in one body style--a five-door hatchback--and secondly, instead of packing in loads of features for the money, Mazda has instead kept the '2' simple and lean. What they ended up with is, if you opt for the manual gearbox, one of the most fun-to-drive small cars on the market.

Tastefully styled inside and out, with clear nods to Mazda's sportier models like the MX-5 Miata inside, the Mazda2 goes a long way toward feeling the part of a hotter hatch even if it isn't. The Mazda2's pert, upright stance, low front end; and its simple hatch design with plenty of window space is a refreshing departure from the cavelike claustrophobia you'll find in some other small cars. The cabin is a bit dark yet simple and clean, and some might find it refreshing that there are no luxury pretenses whatsoever.

By the numbers, the Mazda2 has old-school econocar specs, and it would be hard to imagine that its 100 horsepower could be enough. Yet Mazda has engineered this car with leanness in mind every step of the way, and it weighs only about 2,300 pounds. The result is that, with the manual gearbox, it's perky and responsive if you keep the engine revving. Factor in the great steering feel and how buttoned-down the suspension feels at low speeds, and you have a small car that's a lot of fun to drive in the city. Just be aware that the four-speed automatic sacrifices much of this model's eager attitude.

The Mazda2 feels a little tight for taller folks inside, but it works provided you're willing to push the seat back all the way; otherwise you'll need to negotiate back and forth if you're trying to fit anyone taller than a small child in back. Whether you opt for the Sport or Touring models there's nothing special in the interior appointments, although you do get a few more trim upgrades, and upgraded red piping for the seats, in the Touring. The Mazda2 rides pretty well, but one aspect we don't like so much is that its short wheelbase and suspension tuning allows quite a bit of fore-aft motion when shifting or braking.

Safety features are typical for a model of the Mazda2's size and price; they include side-curtain bags that protect front and rear outboard occupants, plus electronic stability control, anti-lock brakes, and a brake override system. But its ratings, including a couple of less-than-stellar 'acceptable' scores from the IIHS, aren't at the top of the class.

The 2013 Mazda2 is simple, but it succeeds in looking zoomy while also smooth and sophisticated from the outside. The exterior look stands up well as contemporary and well-coordinated, with sculpted front and rear ends leading to lines that flow, sweeping upward, around a wide, sloping greenhouse. The Mazda2 includes the brand's 'grin' look in front, but not even that interrupts this neat, coherent design.

Part of the reason the Mazda2 looks stable, solid, and sporty is because it tends to look a bit lower and wider than it really is. The wedge shape produced by the upkicked beltline, combined with the more curvaceous tail stand as fresher looking and more pleasing in general than the closely sized Ford Fiesta, with that car's more abruptly truncated rear styling and bulging headlamps.

Visually, only a few differences separate the base Sport from the high-level Touring package. The most notable are the alloy wheels on the high-end model; the painted metal wheels with plastic wheel covers on the entry model harken back to an early day of econobox cheap.

Inside, the Mazda2 feels like an inexpensive small car, but one that's tastefully done, with some sporty detailing like red seat-upholstery piping and leather steering-wheel trim for the Touring model. Overall, the design is clearly inspired by some of Mazda's larger and sportier models, like the Mazda3 and Miata, and interior trims tend to be dark but not drab.

The 2013 Mazda2 is among the best-handling small cars--despite its meager 100-hp rating.

The 1.5-liter four-cylinder engine that comes under the hood of all 2013 Mazda2 models isn't that impressive from a numbers standpoint, as it only makes 100 horsepower and 98 pound-feet of torque. Furthermore, that horsepower and torque is farther up the rev range than some other modern small-car engines.

Considering that, the five-speed manual gearbox makes the most sense with this high-revving engine, and provided you don't mind making it a habit to rev the engine a bit above 3,500 rpm. A four-speed automatic transmission is available, but it has widely spaced ratios and tends to shift too early to provide much perkiness on demand--and it lacks a true manual-shift mode.

Handling is where the real "zoom-zoom" happens in the Mazda2; behind the wheel, you'll forget you're in a small hatchback with a pretty tall stance. The Mazda2 feels lower and wider than it is from inside, with a beautifully balanced chassis and suspension tuning that's firm but well damped. Even the electric power steering gives the impression that the Mazda2 is a hot hatch in disguise. And we'll go so far as to say that the Mazda2 feels like a less-expensive alternative to the base Mini Cooper.

That said, the Mazda2 feels very much in its place on tight city streets and congested areas, displaying lots of grip and poise despite its small, narrow 195/50 tires. While it feels just as composed at higher speeds, that's where the engine's inadequacies start becoming an issue. The engine doesn't have a lot of power to spare, so the engine noise and required downshifting to move rapidly on highways can be a bit fatiguing if you want to keep up the same energetic pace at higher speeds.

The Mazda Mazda2 has comfortable seats and is, in general, inexpensive without feeling too cheap.

The 2013 Mazda2 has an interior that doesn't feel any larger than its interior suggests. Despite that, it's surprisingly close, by the numbers to the larger compact Mazda3, surprisingly.

There's decent legroom for four adults, provided none of them is more than six feet tall. At that height, you'll also max out the headroom and need to position the front seat a bit farther back--which takes its toll on rear legroom. Only smaller children will fit behind taller adults. To sum, the Mazda2 may be best used as a two-person vehicle, with the rear seat folded flat to offer maximum load space.

With supportive and comfortable front seats, the interior is nice-looking but doesn't impress one way or the other. The fabric is hardly premium, but the texture goes beyond plain old cloth, and the red piping in the Touring model adds an unexpected touch of color.

The cabin of the Mazda2 feels like it's been built to be inexpensive but not cheap, and provided you don't expect all that much polish or panache you won't be let down. The plastics feel durable, but tend to be a bit drab. You'll hear plenty of engine noise, especially when revving the engine, as you need to do when accelerating at anything more than leisurely, but otherwise the interior is free of rattles, squeaks, and groans.

Safety features are pretty typical for this class, though crash-test ratings for the Mazda2 aren't quite at the top of the list.

The Mazda Mazda2 hasn't performed at the top of its class in crash-testing, but it does include a set of safety features that's par for a car this price.

In Insurance Institute for Highway Safety (IIHS) testing, the Mazda2 achieved a top rating of "good" for its frontal-offset crash and roof strength tests, but it was only rated "acceptable" in the side and rear crash categories.

Safety features are typical for a model of the Mazda2's size and price; they include side-curtain bags that protect front and rear outboard occupants, plus electronic stability control, anti-lock brakes, and a brake override system.

Used Mazda MAZDA2 for sale near

The 2013 Mazda Mazda2 is simple and inexpensive, and it really delivers on the basics; but keep in mind that factory options and tech features are slim.

The 2013 Mazda2 is offered in a very simple lineup, with just two models, a handful of color combinations, and only a few extras--most of them dealer-installed.

The Mazda2 Sport is the base model and it includes standard remote keyless entry; power locks, windows, and mirrors; air conditioning; a rear-window washer/wiper unit; a tilt-adjustable steering wheel; a folding rear seat with a 60/40 split seat back; and a single-CD audio system with MP3 input and four speakers. All models for 2013 now include a USB input and auxiliary audio input. In general this is an appealing package for keep-it-basic commuters, although the plastic wheel covers on steel wheels feel a little bargain-basement.

Moving up modestly to the Touring model gets you 15-inch alloy wheels, a six-speaker sound system, a trip computer, and many more appearance and trim upgrades. A roof spoiler, front fog lights, a leather-wrapped steering wheel with built-in audio controls, nicer cloth upholstery with red piping, and even a chrome exhaust tip are among them.

There's still no factory Bluetooth or navigation option; you'll have to see your dealership for factory-approved upgrades in either of those cases.

Gas-mileage numbers for the 2013 Mazda2 are nothing special if you go by the official EPA fuel economy numbers. Yet our real-world experience with the Mazda2 indicates that you may end up doing a bit better than those numbers suggest in actual commuting.

According to the EPA, the Mazda2 gets 27 mpg city, 34 mpg highway when it's fitted with the four-speed automatic. Opt for the five-speed manual--which is probably more "zoom-zoom," to be honest--and those numbers go up to 29 city, 35 highway. For the latter, that's a combined 32-mpg rating. But our road tests indicated that the number may be closer to 35 mpg, even if you drive it energetically and flog it around.

Thank the Mazda2's lightness for the excellent numbers; it tips the scales art around 2,300 pounds--lighter than the MX-5 Miata roadster--due to a so-called 'gram strategy' for shaving weight wherever and whenever possible from each component.

We should note that due to the aerodynamics of small hatchbacks, they don't typically do very well for mileage in high-speed Interstate-style driving, so you may want to go a size up to the Mazda3 and its economical new Skyactiv powertrain if that's the majority of your driving.

1 Review
5 star
4 star
100%
3 star
2 star
1 star
Rate and Review your car for The Car Connection! Tell us your own ratings for a vehicle you own. Rate your car on Performance, Safety, Features and more.
Write a Review
For 2013 Mazda MAZDA2

I just bought this car today..Driving home was fun. I was used to driving a big truck and was kind of leery about liking a smaller vehicle. I lover it and it's very cute with great looks and gas mileage.
people found this helpful.
Was this review helpful to you? Yes
USED PRICE RANGE
$8,988 - $14,995
Browse Used Listings
in your area
7.0
Overall
Expert Rating
Rating breakdown on a scale of 1 to 10?
Compare the 2013 Mazda MAZDA2 against the competition
Compare All Cars
Looking for a different year of the Mazda MAZDA2?
Read reviews & get prices
Related Used Listings
Browse used listings in your area
See More Used
The Car Connection Daily Headlines