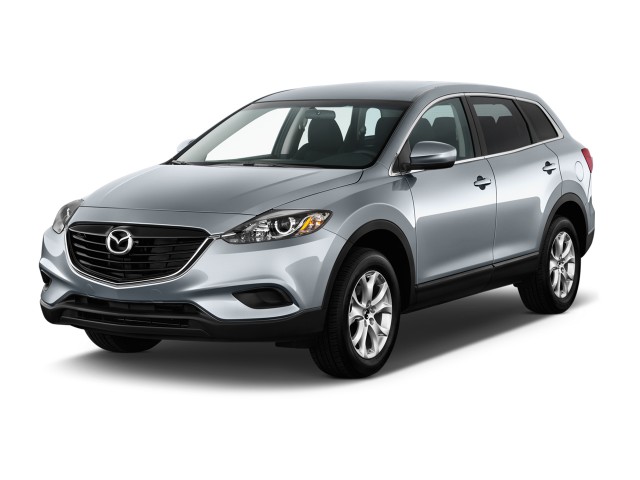 We tend to think the base Sport models of the 2014 Mazda CX-9 are the better deal. As you move up the lineup to Grand Touring models, the CX-9 simply fails to provide the modern, upgraded materials that its almost-luxury price should provide.

The 2014 Mazda CX-9 is one of the most engaging large crossovers from the driver's seat; but the CX-9 is no standout for efficiency, like the brand's newer cars.

The 2014 Mazda CX-9 stands at some distance from most of Mazda's current lineup. It's not only Mazda's largest vehicle, but it's also a holdover from another era at the automaker--before it decided to 'go it alone' away from Ford, and focus on engineering more lightness and fuel efficiency into its cars and crossovers. While it might not be a class-leader in gas mileage, like those other models, it ranks as one of the better large-crossover options if you need three rows of seating and a responsive, almost nimble driving demeanor.

Just last year, the CX-9 received a modest set of upgrades to the CX-9, with a new snout that closely matches the front-end look of the recently redesigned CX-5 compact crossover, Mazda 6 sedan, and Mazda 3 compact-car family. The CX-9 was already one of the better-looking vehicles in its class, and we think that the Kodo 'soul of motion' design language--although Mazda's only applied it with new front-end and rear details--is a good fit with the CX-9's existing side profile. Mazda brought a number of minor aesthetic changes to the cabin, with the center-stack area redesigned to accommodate a 5.8-inch touch screen. And overall, the interior look, while clearly carried over, is a better fit with the CX-5's somewhat more upright look.

There haven't been any performance changes for the 2014 Mazda CX-9, and that's a good thing. The 3.7-liter 'MZR' V-6 still makes 273 horsepower, runs on regular gas, and is mated to a six-speed automatic transmission; in all it's a combination that we've found punchy yet refined, with plenty of torque to confidently carry a full load. The rather firm suspension tuning and quick-ratio steering are the real keys as to why this vehicle feels sportier than the rest, though; it's surprisingly fun-to-drive on a curvier road, relative to just about any other vehicle with three rows of seating. Just beware that ride comfort can be a little busier and harsher--especially if you go with the larger 20-inch wheels. And one disappointment for some shoppers will be fuel economy; all-wheel-drive versions get just 16 mpg city, 22 highway, and front-wheel-drive versions only do 1 or 2 mpg better.

Between the front two rows of seating, you can easily fit five adults. As for the third row, it's only for kids, and even they might be a bit challenged by the narrow gap provided for entry and exit. Keep those rearmost seatbacks folded most of the time, and you have space for a large load of groceries. Even with last year's improvements, the CX-9 cabin doesn't feel luxury-caliber, yet it's nicely detailed and well put-together in general.

Standard equipment is typical for the class--for a three-row crossover without a luxury badge--and it includes three-zone automatic climate control, steering-wheel audio and cruise controls, a 5.8-inch touch screen system, a six-speaker audio system with six-disc changer, USB and aux-in ports, and Bluetooth connectivity, as well as HD Radio technology. Farther up the model line, you can get SMS text delivery, voice commands, satellite radio, Bose Centerpoint sound, and a DVD entertainment system for those in back. Top Grand Touring models include leather seating, heated front seats, power front seats, and heated side mirrors, among many other extras, but when optioned with the works (DVD, Bose audio, nav, AC outlet), the price tops the $40k mark.

1 Review
5 star
4 star
100%
3 star
2 star
1 star
Rate and Review your car for The Car Connection! Tell us your own ratings for a vehicle you own. Rate your car on Performance, Safety, Features and more.
Write a Review
2014 Mazda CX-9 AWD 4-Door Touring

Great handling car. Good ride. Soaks up the bumps. Good pickup.
people found this helpful.
Was this review helpful to you? Yes
USED PRICE RANGE
$9,200 - $19,995
Browse Used Listings
in your area
7.6
Overall
Expert Rating
Rating breakdown on a scale of 1 to 10?
Compare the 2014 Mazda CX-9 against the competition
Compare All Cars
Looking for a different year of the Mazda CX-9?
Read reviews & get prices
Related Used Listings
Browse used listings in your area
See More Used