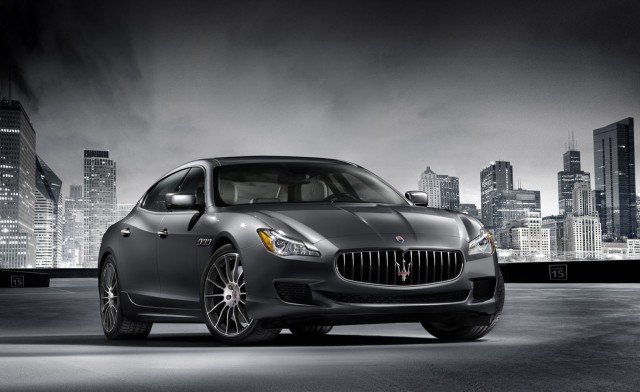 The six-cylinder Quattroporte is plenty strong and manages to make a great noise. Choosing a powertrain is really less about cylinder count and more about which wheels you want to be driven.

The 2015 Maserati Quattroporte offers a selection of strong twin-turbo engines and a bold look, inside and out, as well as available an available all-weather-capable all-wheel-drive system.

After being reborn for the 2014 model year, Maserati's big sedan is back with a handful of updates. The Quattroporte continues as the brand's top four-door, now accompanied by the smaller, related Ghibli. It's as stylish as ever and offers luxury and performance in equal doses with a choice of modern twin-turbo engines.

Up close, the latest Quattroporte's details don't clearly recall its predecessor, but step back a few feet and the flowing proportions resolve into perfect, familial clarity. Crisp creases and angular accents dominate the exterior design. An ovoid grille with a large trident emblem sets the tone at the nose, sweeping up to the curved hood and into the fenders. A character line traces along the side and over the flanks, into a simple, understated rear end. The overall effect is one of refinement and class, as well as emotive style. Inside, the look is much more subdued, but no less well-executed. Satin woods and fine leathers meet with metal accents in a clean, two-tone finish. The only detail that detracts from the look is a poorly integrated central touch screen flanked by knobs that appear to have been tacked on.

Under the hood, the 2015 Quattroporte offers a pair of engines, both of them fitted with twin turbochargers. The base engine, which comes on the Quattroporte S Q4, is a 3.0-liter V-6, its turbos helping to generate 410 horsepower and launch it to 60 mph in about five seconds. Top speed with the V-6 is 177 mph. A 3.8-liter twin-turbo V-8 is also available, the province of the GTS model, rated at 530 horsepower and 479 pound-feet of torque, or up to 530 pound-feet during the momentary "overboost" function. The result is 0–60 mph acceleration runs of 4.7 seconds and a top speed of 191 mph.

A ZF eight-speed automatic transmission is standard on both models. The V-8 GTS features rear-wheel drive, while the S has Maserati's Q4 all-wheel-drive system. The system is rear-biased, sending 100 percent of torque to the rear axle under normal conditions, and up to 50 percent to the front wheels when it detects slip. It adds little weight while making the car a bit more manageable in anything outside of ideal, dry-road conditions.

On the gas mileage front, the 3.8-liter V-8 in the GTS earns an EPA rating of 13 mpg city, 22 mpg highway, and 16 mpg combined, meaning it's not very efficient, even for a large and powerful luxury sedan. The all-wheel-drive S Q4 and its twin-turbo V-6 do slightly better, with ratings of 15/24 mpg, or 18 overall.

Equipment and features are, as with any Maserati, quite good even in base form, and there are many possibilities for personalization and customization. Available features include a 1,280-watt Bowers & Wilkins audio system; the Maserati Touch Control screen; adjustable pedals; and a reverse camera.

For 2015, Maserati has made the previously optional in-car WiFi system standard on all Quattroporte models. It has also enhanced the GTS model's exterior by adding red-highlighted badging and GTS center caps, and slightly massaging other exterior trim elements. Some new options are available, including red leather for the interior, contrast upholstery stitching, a few new paint colors, and some new wheel designs.

As is the case with many expensive, limited-volume vehicles, the 2015 Maserati Quattroporte hasn't been crash tested by either the National Highway Traffic Safety Administration (NHTSA) or the Insurance Institute for Highway Safety (IIHS). Nevertheless, a steel monocoque reinforced with aluminum crossmembers should provide a strong passenger cell. The related Ghibli has been tested by the IIHS, earning 'Good' scores in all categories of testing it has been subjected to.

Be the first one to write a review on 2015 Maserati Quattroporte
Rate and Review your car for The Car Connection! Tell us your own ratings for a vehicle you own. Rate your car on Performance, Safety, Features and more.
Write a Review
USED PRICE RANGE
$26,900 - $36,995
Browse Used Listings
in your area
8.0
Overall
Expert Rating
Rating breakdown on a scale of 1 to 10?
Compare the 2015 Maserati Quattroporte against the competition
Compare All Cars
Looking for a different year of the Maserati Quattroporte?
Read reviews & get prices
Related Used Listings
Browse used listings in your area
See More Used
The Car Connection Daily Headlines