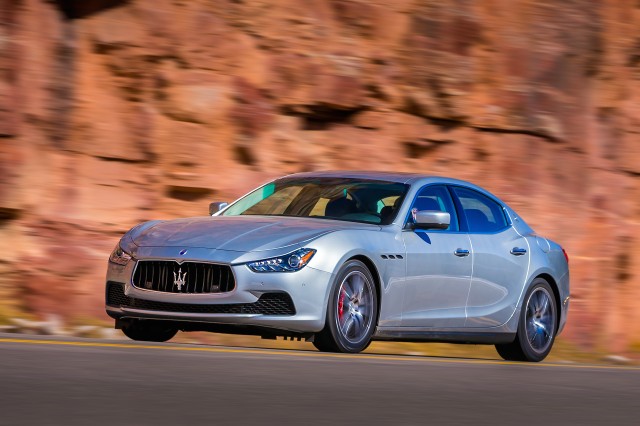 If you're going to drive something as rare as a Maserati, take the time to spec it out exactly as you'd like. A blue leather dash with matching calipers, seat stitching, and a sueded headliner? Yes, exactly--just don't forget the open-pore wood dash.

The 2015 Maserati Ghibli has panache to burn, but back-seat space is tight and handling isn't quite up to the best in the mid-size class.

The 2015 Maserati Ghibli has a throwback name, but it's only a year old. It was introduced for the 2014 model year as a part of Maserati's goal of boosting sales worldwide--an effort that will eventually include a Levante crossover SUV and a new Alfieri sports car, along with the recently updated Quattroporte four-door and GranTurismo four-seat coupe and convertible.

The Ghibli is scaled down in size, but the silhouette shares much with the bigger Quattroporte. Priced from about $70,000 in standard form and upwards of $78,000 for the all-wheel-drive Ghibli S Q4, the newest Maserati is a rival for vehicles like the Mercedes-Benz CLS, the Audi A7, BMW's 6-Series Gran Coupe, and the Jaguar XF.

The Ghibli's exterior is another exercise in simple yet brilliant design from Maserati. It's relatively compact for its class, but brilliantly rendered, with a deep shoveled nose bearing a trident badge and grille, sleekly sculpted fenders, and a pert rear end with a roofline that's the chief link between it and the Q-Porte.

The interior is a more sober environment, a generation advanced from the bigger Maserati sedan, just slightly more technical and modern in appearance. There's a reason for that: the dash is shaped like one of its relatives from the Fiat Chrysler Group, the Jeep Cherokee. It's distanced from its origins with layers of leather and opulent trim choices like open-pore wood, and fitted with huge, cold-to-the-touch paddles for shifting. Still, some lesser cues show up in some plastic trim, in the parts-bin switches and buttons.

The Ghibli's power comes from a 3.0-liter twin-turbocharged V-6 engine shared with its bigger brother, the Quattroporte. It comes in two outputs: 345 horsepower in the standard Ghibli, and 404 hp in the Ghibli S Q4. One of our favorite features of Maseratis is absent--the mellifluous roar of a potent Ferrari-derived V-8. In its place, the turbo V-6 makes some thrilling noises of its own, just of a more throaty, whistling nature, with some resonance at mid-range engine speeds that echoes in the tight back seat.

Maserati says the Ghibli accelerates to 60 mph in just 5.0 seconds, topping out at 177 mph.

An eight-speed automatic transmission is standard on all Ghibli models, and it offers a manual-shift mode that keeps the car from overrevving, but otherwise lets the drive choose the shift points either by the shift lever or the paddles. The standard car is rear-wheel drive; Maserati's Q4 all-wheel-drive system is new for 2015, and adds just a touch over 100 pounds to the car, distributing torque from the rear to the front when wheelspin is detected.

There's also a choice of driving modes, from economy, normal, and sport to a mode with all stability control turned off. You may not want to venture that far out of safety's range, but if you do, the reward is very good handling. The Ghibli has good weight balance for a sedan, and rides on a double-wishbone front suspension, and five-link rear suspension.

In a brief drive of the Q4 on bone-dry roads outside Malibu, the Ghibli was able to carve up tight canyon roads we'd left warm from runs in the hot Alfa Romeo 4C. The Alfa's able to squirt through these roads with needle-like accuracy; the Ghibli's bigger and heavier, of course, but still tackles the same pavement with zest. In normal driving modes, the transmission's shifts were smooth and the twin-turbo V-6 was docile and quiet. Flipped into Sport, the Ghibli's throttle and shifts picked up the pace with the reflexes you'd expect from a sport sedan.

As for handling, we'd wait to sample it on smoother, less byzantine roads before calling it muddled. Our Ghibli S Q4 was shod with summer tires and rode very firmly--more sport than sedan, something a softer set of all-season tires might resolve, while giving up some ultimate grip. It's damped less fervently, and leans into curves with more grace than hardcore flatness. The hydraulic-actuated steering system doesn't have a super-quick ratio, and it takes a lot of turn at the wheel to carve up corkscrewing roads in the proper Italian way.

The Ghibli's not a small or light car--it checks in with a 118-inch wheelbase, an overall length of just over 195 inches, and a curb weight hovering in the 4,100-pound range. It cossets the driver and front passenger beautifully, with fine leathers and well-finished plastics edged in metallic trim throughout. The front bucket seats could use more lumbar support, but the backrests are wonderfully bolstered, and slathered in leather with piping and embroidered logos, just like the rest of the cabin.

At about 11 inches shorter than the Quattroporte, and with a decidedly coupe-like profile, the Ghibli has a back seat that's just tight for adults. Getting in past the small door opening is difficult for taller passengers, who then face slim knee and head room. It's not much worse than in an XF, but the Cadillac CTS and the bigger cars in this class do a better job of packaging, though none are shaped with as much sultry abandon as the Ghibli. Trunk space is on the generous side: a couple of roll-on bags fit without too much fuss.

Neither the National Highway Traffic Safety Administration (NHTSA) nor the Insurance Institute for Highway Safety (IIHS) have crash tested the brand-new Ghibli, but the brand says it has targeted a five-star NCAP crash safety rating by including a third force load path and seven standard airbags in addition to its high-strength chassis. A rearview camera and Bluetooth are standard.

For the 2015 model year, the Ghibli also adds standard, and buyers have new brake caliper colors and contrast stitching to choose from--that's one of the true joys of owning a Maserati, the walk through the color and trim palette, selecting headliners, wood and carbon-fiber trim, gorgeously dyed Poltrona Frau leathers.

2 Reviews
5 star
50%
4 star
3 star
50%
2 star
1 star
Rate and Review your car for The Car Connection! Tell us your own ratings for a vehicle you own. Rate your car on Performance, Safety, Features and more.
Write a Review
2015 Maserati Ghibli 4-Door Sedan S Q4

The bottom line is The Ghibli Q4 is 50/50/50. Simply put the car is stunning to look at, very elegant/sporty inside and it flys on rails.

That's all :)
+ More »
people found this helpful.
Was this review helpful to you? Yes
For 2015 Maserati Ghibli

Gorgeous exterior.... Recurring problems with electronics and engine. Ughhh
people found this helpful.
Was this review helpful to you? Yes
USED PRICE RANGE
$19,495 - $39,995
Browse Used Listings
in your area
8.2
Overall
Expert Rating
Rating breakdown on a scale of 1 to 10?
Compare the 2015 Maserati Ghibli against the competition
Compare All Cars
Looking for a different year of the Maserati Ghibli?
Read reviews & get prices
Related Used Listings
Browse used listings in your area
See More Used
The Car Connection Daily Headlines