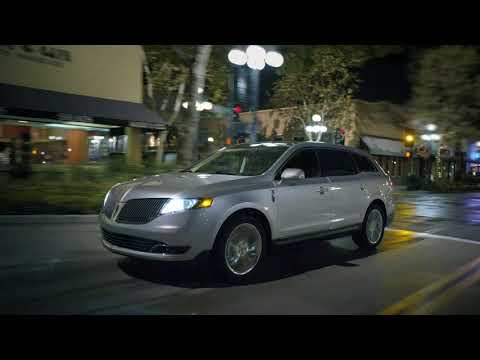 Think twice about all-wheel drive if fuel economy is a concern; the 2018 Lincoln MKT’s optional twin-turbo V-6 is powerful but very thirsty.

Look beyond its styling and you’ll find that the 2018 Lincoln MKT makes a great passenger-hauler. Limo services nationwide know that.

The 2018 Lincoln MKT is a three-row luxury crossover SUV that's bound to be your next black-car ride.

Lincoln sells the spacious crossover to many luxury fleet operators, who may like its comfortable interior with good room for up to six passengers, as well as its decent value. We’ve rated it at 5.6 out of 10. (Read more about how we rate cars.)

This year, the 2018 MKT is largely unchanged aside from some revised paint colors and new names for its trim levels. With a basic design that dates back to 2009, the MKT is hardly fresh but its tall wagon/low crossover design accommodates passengers well. The MKT is available in Premier and Reserve trim levels. A 3.7-liter V-6 rated at 303 horsepower is standard, while an optional twin-turbo 3.5-liter V-6 rated at 365 hp is, well, reserved for the MKT Reserve. The base engine can be paired only to front-wheel drive, while the twin-turbo is exclusively available with all-wheel drive.

The base engine provides adequate go, but the twin-turbo engine is a surprise with its almost sporty exhaust note and firm, communicative steering. Regardless of engine, the MKT’s long wheelbase provides a comfortable ride, especially in twin-turbo models with their standard adaptive suspension.

Beneath its land yacht looks, which channel only hints of the martini-era, city block-long Lincolns of the 1960s, the MKT is a reskinned Ford Flex crossover. Like the Ford, the MKT has sumptuous seats in the first and second rows. The third row is a challenge to access, but it provides decent space. The MKT’s interior isn’t sleek or modern—aside from being one of just two 2018 Lincolns to boast the brand’s intuitive Sync 3 infotainment system with Apple CarPlay and Android Auto (the 2018 Navigator is the other, in case you were wondering).

Only the MKT Reserve offers advanced safety tech like collision warnings and adaptive cruise control, bundled together with a few other features for $2,000. Automatic emergency braking is not available, however.

Suffice to say you’re not in the market for a 2018 Lincoln MKT for its styling.

Looks aren’t the 2018 Lincoln MKT’s best selling point. An ungainly exterior gives way to a soothing if dated wood-and-leather-lined interior. We figure its interior is about average, while the exterior loses two points for being genuinely unpretty.

The MKT shares its underpinnings and engines with the Ford Flex, a boxy, distinctive crossover that has aged well over the last decade (ahem, Ford, maybe time for a redesign?). If only the two shared some exterior cues. The MKT’s long snout and lumpy body do it no favors. It’s a look that hails from one of Lincoln’s previous makeovers and not its latest reboot.

Inside, the MKT’s dash is laid out in an orderly, if unexciting fashion. It looks best in black with glossy wood, which makes it something of a throwback to Japanese luxury cars from the 1990s.

Capacitive-touch audio and climate controls take the place of conventional buttons for a clean look. If only they worked as well as knobs and switches.

The 2018 Lincoln MKT can be equipped with a strong optional V-6 that gives it an almost athletic personality, but you’ll pay a lot to get to that level. Starting with the base MKT, we’ve given the range a point above average for its comfortable ride. That brings it to a 6 out of 10. (Read more about how we rate cars.)

The MKT comes standard with a 303-horsepower 3.7-liter V-6 and front-wheel drive in the Premiere trim level. Pop for all-wheel drive and you’ll end up with a 365-hp twin-turbo V-6, unique steering tuning, and an adaptive suspension. The base MKT engine is strong enough and sufficiently well-muffled to do duty as a town car. It’s quiet and composed and its standard 19-inch wheels soak up rutted pavement—we’re looking at you, Manhattan—well.

The MKT Reserve’s two-turbo V-6 furnishes impressive power and delivers a mountain of torque at the tap of the accelerator pedal. Both versions of the MKT use a 6-speed automatic transmission that shifts smoothly despite being down a couple of gears compared to some rivals. With the twin-turbo V-6, the MKT Reserve also includes convenient paddle shifters that pair with its adaptive suspension to provide a surprisingly sporty driving experience. Lean into corners is minimal and the MKT Reserve’s steering is accurate and direct with little of the artificial feel that has crept into most crossovers.

The 2018 Lincoln MKT excels as a passenger hauler, albeit with some quirks.

Long-haul front and second row seats elevate the 2018 Lincoln MKT above average, although its interior isn’t as upmarket as its price tag.

We’ve given the MKT points for its comfy front and second row seats and another for its commodious cargo hold, but we’ve dialed one back for frustrating climate and audio controls. That brings it to a 7 out of 10 on our scale. (Read more about how we rate cars.)

Standard Bridge of Weir leather upholstery elevates the MKT’s interior. Front seat passengers sit a little lower in the cabin but will appreciate the nicely padded, power-adjustable thrones. Row two can be ordered as a three-place bench or with individual captain’s chairs. Either way, there’s good stretch-out room and similar padding to up front. The third row is tough to access for adults, but more roomy than the MKT’s low roof might suggest.

The MKT can swallow nearly 76 cubic feet of cargo with rows two and three stowed away. With the second row up, that number shrinks to a still reasonable 39.6 cubic feet. Keep all three rows upright and that number slides to 17.9 cubes.

Though there’s plenty of leather and wood, the MKT’s capacitive buttons for audio and climate controls don’t fulfill its luxury mission well. They’re challenging to use, especially the volume slider. That the rest of the Lincoln lineup has moved on from this frustrating design speaks volumes to the effort the brand puts into the MKT.

The 2018 Lincoln MKT comes up short on advanced safety tech.

The 2018 Lincoln MKT has performed well in the crash tests that have been performed on it so far, but we don’t have enough federal or independent data to assign it a score. (Read more about how we rate cars.)

All 2018 MKTs come with six airbags, stability control, anti-lock brakes, and a rearview camera. An option package only available on the MKT Reserve adds collision warnings and a few other high-tech safety goodies. It’s a shame that it’s not available at a lower price point than nearly $50,000. More egregious is the fact that no 2018 MKT can bring itself to a halt automatically if it detects an impending collision, technology available on almost every other new car.

Inflatable rear seat belts are optional. They’re designed to keep passengers in place in a wreck, but they’re not compatible with some car seats and the belts themselves are bulky and uncomfortable.

The IIHS has smacked a few MKT crossovers into walls and has found good results, but the insurance industry-funded group hasn’t yet subjected it to the more challenging small-overlap crash test. The federal government, meanwhile, has not tested the MKT.

Used Lincoln MKT for sale near

The 2018 Lincoln MKT justifies its high price tag with lots of traditional luxury equipment and a great infotainment system.

A good set of luxury features helps the 2018 Lincoln MKT justify a fairly high price tag. We also like its modern infotainment system with its standard Apple CarPlay and Android Auto, which helps it earn a 7 out of 10. (Read more about how we rate cars.)

The MKT is available in two trim levels: the Premiere with its 3.7-liter V-6 and front-wheel drive and the Reserve with its twin-turbo V-6 and all-wheel drive. All models include an 8.0-inch screen for infotainment that benefits from parent company Ford’s latest Sync 3 software. If you’ve used a previous Ford infotainment system, you’ll be in for a pleasant surprise. Sync 3 responds quickly and its menus are easy to sort through.

The MKT Premiere comes standard with 19-inch alloy wheels, leather upholstery, HID headlights, a power liftgate, remote start, and heated and air conditioned front seats. Other than paint colors and interior hues and inflatable seatbelts for the second row, there are no options for the base MKT.

The 2018 Lincoln MKT guzzles like an old-school land yacht.

Yes, it’s more fuel-efficient than the old Town Car, but the 2018 Lincoln MKT won’t have you bypassing too many gas stations. We’ve awarded it 5 out of 10 points on account of its thirst for fuel. (Read more about how we rate cars.)

Both MKTs are designed to run on regular unleaded.

1 Review
5 star
100%
4 star
3 star
2 star
1 star
Rate and Review your car for The Car Connection! Tell us your own ratings for a vehicle you own. Rate your car on Performance, Safety, Features and more.
Write a Review
2018 Lincoln MKT 3.5L AWD Reserve

Timeless classy styling has most available advanced safety technologies that carries 7 passengers in luxury as a proud chariot to the symphony and doubles as a weekend boy racer when doing Home Depot chores.