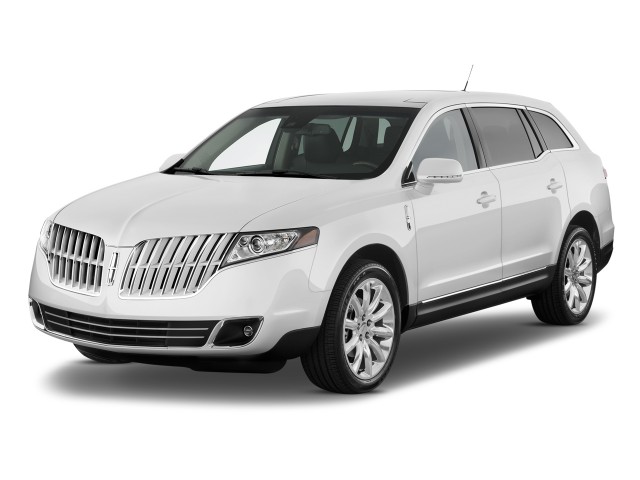 If you’re buying the MKT for its technology, make sure your cell phone pairs with the MKT’s Bluetooth-controlled SYNC system. Some phones are not supported, and shouting voice commands and mashing the steering-wheel buttons just makes you look strange to other drivers.

The swinging style sets an audacious mood—and the 2011 Lincoln MKT backs it up with turbo V-6 thrust.

Can you imagine a seven-seat crossover that makes you think "responsive?" There are a few—and maybe the least likely vehicle to fit that description is the 2011 Lincoln MKT.

A long, low, wide barge on first glance, the MKT has the good fortune of sharing its running gear with the Ford Flex, and to some extent, the Ford Taurus and Lincoln MKS. Tucked beneath its brash, chrome-laden sheetmetal and behind that immense grille are an independent suspension with available all-wheel drive, an optional turbocharged V-6 engine, and more than the usual touch of good driving feel.

The MKT also brings with its vast interior room and a classy,well-finished interior with nearly every entertainment feature either standard or available. On top of all that, it's among the safest vehicles you can buy,period.

The 2011 MKT returns with few changes from its first model year on the market. Priced from $47,000, it's a distinctive choice in a class of crossovers that also includes the Acura MDX, the Buick Enclave, the Audi Q7, and the Ford Flex.

You have to admire Ford’s audacious take on crossover style, even if you don’t love it—but the no-excuses cabin is an across-the-board winner.

It won’t be ignored—that’s how brash the Lincoln MKT looks against its crossover competitors. While the Enclave’s lovely and curvy, and the Q7 is Germanic and technical, the MKT’s an unabashed love affair with the martini-generation land yachts of the 1960s, more so outside than in.

Casual glancers might be thrown by the MKT. It’s based on the same mechanicals as the boxy Ford Flex, but that impossibly long body, all the chrome and bright trimwork, and the styling-statement front end put more distance between it and the Flex than most corporate cousins. Where the Flex is a two-box design in the purest sense, the 2010 MKT flows from a canted twin-nostril grille to a sensual upkick in its shoulder line, finishing in a broad, angled decklid banded by a ribbon of taillights and badges. It’s a standout design with details that will have you looking a second and third time to identify its heritage. If you’re familiar with the Continentals of the mid-Sixties, though, it’s almost touching in its retro cues.

Climb into the cabin, and there’s a far more traditional interpretation of luxury waiting. The MKT’s wood- or metallic-trimmed dash echoes the shapes on the front end smartly; its LED white lighting and that big, sharp LCD screen will draw your eye to the high-tech features. They’re underscored by rows of black buttons that don’t do much for driver-oriented clarity. The impressive interior’s the sum of lots of well-executed details, like the fonts on the gauges and the tight fit of the wood trim against low-gloss, soft-touch plastic.

Look for a massive V-8 and rear-wheel drive under the MKT's skin, and you won't find one. Ford's downsizing its engines while it supersizes performance, and the optional turbocharged six on the MKT will shock some people as much as its buttoned-down handling.

A single engine powers both version of the MKT—it's just that the non-turbo version likely won't light anyone's fire, particularly this 4,800-pound crossover.

The base 3.7-liter V-6 puts out 268 horsepower, and it's teamed with a six-speed automatic. It can shuffle off a standstill and hit highway speeds in about 8 seconds, but laden with people and optional all-wheel drive, it can start to feel a little leaden. Stir in turbocharging and the MKT gets a boost to 355 horsepower, via the same automatic and front- or all-wheel drive. If you can spare the change, bring this one home. It's impressively quick by any standard, and it's in keeping with the crossover's character: refined and smooth, with just a touch of growly engine noise and rumble. The heavy-duty six-speed automatic responds accordingly, always calling up the right gear at the right time, and paddle shifters will let you choose gears on command.

You might think paddle shifters are an odd touch in a big beast like this, until you hustle one on tightly cornered roads. I tossed an MKT around the Monterey Peninsula during the Pebble Beach weekend, and not only did it look perfectly right in the Lodge's parking lot—it felt right zooming down into deep 20-mph turns. The big hurdle, really, is its size; this is one barrel-chested crossover, and the capable suspension can handle a beating, but some corners are just too small for such a long car. The MKT rides and steers very well, even though its rack is electric-assisted, I enjoyed driving it more than I liked driving Honda's sporty new CR-Z Hybrid.

Room? The MKT’s got room—and great seats all around.

You don't need to buy over-the-counter products like Enzyte to know size matters. It's what makes the 2011 MKT such a party boat. You can squeeze in six or seven adults, emerge on the other side of your Mad Men three-hour lunch, and still be in the clear, as far as HR and harassment go.

The MKT does offer you some choice: There's a six-passenger version with twin buckets in the middle row or a seven-seater with a middle bench. From that row forward, the MKT gives good support in every direction and sensation. The front seats show the attention normally paid to the seats in Volvos; they're fantastic for long drives, with room in all directions and a little contact with hard metallic trim at the knee.The front active headrests are improved over the Flex—they tilt too far forward—but could use a degree or more of recline before we pronounce them perfect. The MKT has telescoping steering to the Flex package, which improves driving position. The second-row seats have copious foot- and legroom, too, and big doors that won't cramp your back.

In the way-back, the third row is almost large enough for some adults, though mainly intended for children. Six-footers will find headroom a touchy issue with the headliner, but everyone else will find it easy to clamber in and settle into a good spot. Power "fold and tumble" second-row seats with heating, cooling, and power-assisted lumbar adjustment are also available, and third-row passengers can fold second-row seats out of the way by pressing a button—a nice touch.

Cargo room behind the third row is as much as an Acura RL, at 17.3 cubic feet; fold down the second seat and it rises to 39.6 cubic feet. With both rear rows folded, the MKT has a cavernous 75.9 cubic feet of room for hauling home estate-sale finds.

Safe and sound, the 2011 Lincoln MKT is one of the most protective rides you’ll find.

The MKT earns top safety rankings from both of the major crash-test groups, and piles on more safety technology to earn the highest score we can give in any category.

It's simply loaded with just about every safety feature imaginable and some that you might have never realized you needed. Ford installs front, side,and curtain airbags (which extend three rows of protection); stability and traction control; anti-lock brakes; a rearview camera; a blind-spot alert system; and adaptive headlamps.

The MKT has earned a five-star rating from the NHTSA (National Highway Traffic Safety Administration) for front- and side-impact tests. The Insurance Institute for Highway Safety (IIHS) also gives the Lincoln its top "good" scores, and since it also has standard stability control, it earns their Top Safety Pick award.

Beyond the norm, Lincoln tops off the safety package with features like Active Park Assist, which helps drivers guide the MKT into parking spaces through sensors and cameras. Pull next to a spot, dial up the assist, and the MKT steers into place, with your help on the gas and brake.

Used Lincoln MKT for sale near

DVD players, panoramic sunroofs, plug-ins for game boys—the MKT’s toys and gadgets add up to one big mute button for kids and cranky spouses. We like.

We're fans of the Ford Flex, but when it comes to standard luxury and entertainment features—rightly so—the MKT elbows it aside with a huge package of e-gear.

The under-$50,000 MKT quickly rises to nearly $55,000 when you opt for the EcoBoost engine. That version dollops on a power panoramic sunroof; 20-inch polished aluminum wheels; active parking assist and adaptive cruise control; a rear-seat DVD entertainment system; and a navigation system with a music hard drive and THX II-certified speakers. The only option we can think of that's found in competitive vehicles and not in the MKT is some kind of mobile TV, like Chrysler's FLO TV and Sirius BackseatTV options.

Still not enough for your needs? You can order a five-quart refrigerator that wedges neatly between the middle seats. Between the fridge and cadres of cup holders, you'll never be more than arm's reach from a Red Bull. That's a good thing, right?

The 2011 Lincoln MKT has low fuel economy--but you have to factor in its seven-passenger carrying capability.

With a choice of supercharged or normally aspirated V-6 engines, the 2011 Lincoln MKT isn't the most fuel-efficient crossover on the market.

However, it's rated fairly well for vehicles with third-row seats. The EPA rates the MKT with the base V-6 at 17/23 mpg when equipped with front-wheel drive. When all-wheel drive is optioned in, the numbers drop to 16/22 mpg.

The EcoBoosted, supercharged MKT loses another mile per gallon, checking in at 16/21 mpg.

Ford has not announced any plans to offer hybrids or diesels in the MKT--instead, the crossover is taking the place of its Town Car as a livery vehicle, subbing in for the old body-on-frame sedan in limousine duty, even as a hearse.

Be the first one to write a review on 2011 Lincoln MKT
Rate and Review your car for The Car Connection! Tell us your own ratings for a vehicle you own. Rate your car on Performance, Safety, Features and more.
Write a Review
USED PRICE RANGE
$8,906 - $14,799
Browse Used Listings
in your area
9.0
Overall
Expert Rating
Rating breakdown on a scale of 1 to 10?
Compare the 2011 Lincoln MKT against the competition
Compare All Cars
Looking for a different year of the Lincoln MKT?
Read reviews & get prices
Related Used Listings
Browse used listings in your area
See More Used