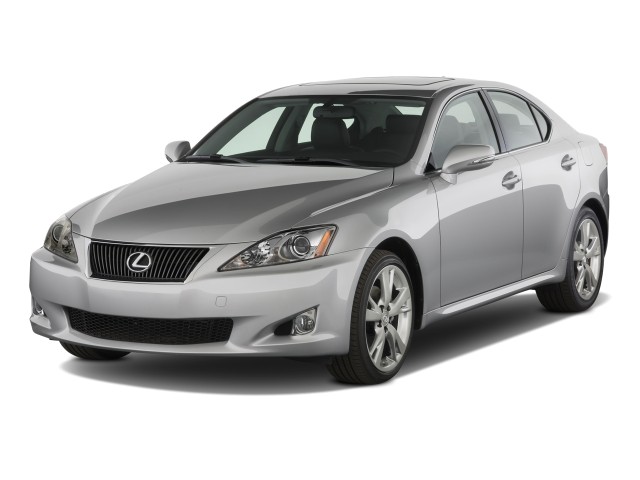 The Lexus IS is a direct challenger to the Infiniti G35, and both brands are known for excellent customer service. The Lexus IS may have a slight edge in drivetrain choice, but it's worth test-driving both to see if the slightly edgier personality of the Infiniti is more to your taste.

The 2008 Lexus IS gives BMW, Benz, and Infiniti a real challenge, though it's still a little softer than those sedans.

All IS 350s and all-wheel-drive IS 250s transfer power to the wheels through a six-speed automatic with F1-style paddle shifters; the rear-drive Lexus IS 250 can be had with that transmission or a six-speed manual gearbox. Fuel economy ranges from 18/26 mpg with the smaller engine and manual transmission to 18/25 mpg for the larger V-6 with the automatic. TheCarConnection.com's editors prefer the rippling engine note of the bigger V-6, not to mention the extra power--especially since there's such a low penalty on fuel economy. Handling is taut and balanced, while the Lexus IS's braking is unexpectedly responsive.

The basic IS shape, sleek and reasonably attractive, mimics the style of Lexus's larger flagship, the LS. It's part of a new styling theme for the brand that has woken up its snoozy reputation for looks. Still, the Lexus IS is more mild than wild, though the interior has nice aluminum-look trim on the console. Four grippy bucket seats are split by a console covered in aluminum-look trim. The backseats don't offer an excess of head- and legroom.

A rear backup camera, a voice-activated navigation system, ventilated front seats, and a 14-speaker surround sound Mark Levinson audio system are among the options. An optional Pre-Collision System is available as well; it anticipates when a crash is imminent and reacts accordingly, applying the brakes more strongly if the driver cannot react quickly enough.

Stability control, six airbags, and anti-lock brakes are standard. The Lexus IS gets four-star ratings for front and passenger-side impact, with five-star protection for driver side impacts. It also gets a five-star rating for rollover protection.

The 2008 Lexus IS wins with styling that reminds reviewers of larger, more expensive Lexus sedans.

The 2008 Lexus IS bears the styling hallmarks of larger Lexus sedans, according to reviews from around the Web and the firsthand impressions of TheCarConnection.com’s editors. It's part of a new styling theme for the brand that has woken up its snoozy reputation for looks. Still, the Lexus IS is more mild than wild, though the interior has nice aluminum-look trim on the console.

Cars.com points out that the 2008 Lexus IS's styling this year "bears a strong family resemblance to its larger, GS series of sport sedans." Kelley Blue Book also comments on this, calling this 2008 Lexus "visually reminiscent of the larger GS." This vehicle's visual attractiveness seems to be a matter of personal taste; Kelley Blue Book, comparing the Lexus IS to its rival BMW 3-Series, finds it lacking. The Orlando Sentinel calls this 2008 Lexus a "BMW Series-3 fighter," while Car and Driver sings its praises: "the styling Lexus gave the new IS line turns the car from sharp to stunning." The Los Angeles Times reports “the luxury division of Toyota has managed, not quite consciously, to build the 3-series that Munich would have built if they hadn’t gotten a straitjacket on design chief Chris Bangle,” and dubs the look “crowded and turbulent.”

In addition to the Lexus IS's "athletic poise [and] impressive build," the Edmunds reviewers are very impressed with its interior, describing the cabin as "impeccably finished." Car and Driver reports that the interior "has a more luxurious look, and the leather and plastic seem even better than those in the original model." ConsumerGuide describes the Lexus IS's interior in glowing terms: "decor is the Lexus-typical mix of rich-looking upholstery, soft-touch surfaces, and high-grade plastics."

The 2008 Lexus IS won’t handle with the confidence of a BMW, but the bigger V-6 has convincing performance nonetheless.

The 2008 Lexus IS earns strong marks for performance from road testers around the Web and from the luxury-car experts at TheCarConnection.com.

At 204 horsepower, the smaller engine is "taxed a bit," according to Orlando Sentinel. Despite the "silky automatic transmission," the smaller V-6 is "sleepy on takeoff, strained up steep grades, and…shy on midrange passing power," according to ConsumerGuide. The larger, 3.5-liter version is "strong in all situations,” however. Nonetheless, Kelley Blue Book says the 2008 Lexus IS 250 feels fairly "quick around town" and, despite its relatively low horsepower rating, "easily copes with the cut-and-thrust of daily commuting as well as freeway passing moves."

All IS 350s and all-wheel-drive IS 250s transfer power to the wheels through a six-speed automatic with F1-style paddle shifters; the rear-drive Lexus IS 250 can be had with that transmission or a six-speed manual gearbox. The "silky" six-speed automatic comes standard with the Lexus IS AWD model, and according to Cars.com, it's an option to the six-speed manual on the rear-wheel-drive version. The Orlando Sentinel declares this to be a "good thing," since the Lexus IS 250 is on the heavy side, forcing this relatively smaller 2.5-liter V-6 engine to work that much harder.

The 2008 Lexus IS's six-speed transmission offers fully automatic mode as well as manual mode, so if necessary for a passing maneuver, the driver can throw it into a lower gear by hand. Some more "traditional" drivers may prefer the standard, fully manual clutch-operated six-speed that comes as standard equipment on two-wheel-drive models for this reason, which can improve acceleration slightly--0-60 in under 8 seconds, according to Cars.com. TheCarConnection.com's editors prefer the rippling engine note of the bigger V-6, not to mention the extra power--especially since there's such a low penalty on fuel economy.

Fuel economy ranges from 18/26 mpg with the smaller engine and manual transmission to 18/25 mpg for the larger V-6 with the automatic.

Handling is taut and balanced, while the Lexus IS's braking is unexpectedly responsive.
The Lexus IS 250's handling "trails the benchmark BMW 3-Series," according to ConsumerGuide, but "corners with little body lean, secure grip, and an agile feel." However, this source states that the optional sport suspension and 18-inch tires "furnish little cornering advantage, nor does AWD on dry roads," but its electrical power steering is "quick and informative." Edmunds describes the 2008 Lexus's handling as "capable." Braking is "swift" and free of "drama," but ConsumerGuide says "pedal action was slightly grabby in some test cars." ForbesAutos says that it "strikes a balance between ride comfort and cornering abilities that will appeal to more casual motorists," noting that "enthusiasts will prefer the X [sport suspension] Package."

The 2008 Lexus IS sports great front seats, slightly tight rear seats, and an ample dose of Lexus build quality inside.

TheCarConnection.com found that most reviewers are fans of the comfort and quality offered by the 2008 Lexus IS--except in the backseat.

Cars.com reports that the 2008 Lexus IS can carry up to five passengers in relative comfort. Ventilated seats and a power tilt/telescoping steering wheel make for greater driver comfort on longer trips. As The Auto Channel points out, "Since the [Lexus] IS wants to be a performance sedan, it has excellent front and rear seating...[offering] very good side support, to hold the driver and passenger in place if the driver gets too energetic." They do note, though, "rear legroom is tight." Edmunds similarly advises "adults or even large children may not be happy in the rear seat on long road trips." Headroom is also at a premium. The Orlando Sentinel expresses similar sentiments: it's "comfortable up front, a little cramped in the rear." Kelley Blue Book agrees with the other reviews on this issue: "Comfortable and supportive power front seats are a welcome home for those up to six feet tall, but modest head and leg room make the three-across fixed rear bench seat best suited for sub-adolescent passengers."

MyRide.com reports that storage space in the 2008 Lexus is at a premium, with a mere 13 cubic feet of cargo room. This is probably only because "the lid aids aerodynamics and also increases trunk room," as detailed by The Auto Channel.

Edmunds calls the interior materials "impressive," with "handsome design [and] impeccable fit and finish." In terms of what's new this year, "marginal improvements" for the 2008 Lexus include scooped-out front seatbacks. According to MyRide.com, "new [Lexus] IS takes the next step toward finishing the thought with touchy-feely surfaces, comfortable seats and--though the test vehicles were pre-production--a level of quality you would expect."

Regarding noise levels, ConsumerGuide reports "coarse-surface tire thrum is noticeable but not intrusive. Wind noise is modest. [The Lexus] IS 250's engine is louder than the IS 350's at high rpm, but both V6s are subdued and relaxed in highway cruising."

The 2008 Lexus IS has good crash performance and plenty of standard safety gear.

The 2008 Lexus IS 250 gets good--if not perfect--marks for safety from reviewers consulted by TheCarConnection.com.

The National Highway Traffic Safety Administration (NHTSA) rates the Lexus IS at four stars for front impacts and five stars for side impacts.

Edmunds reports that these and the "full complement" of airbags are standard equipment on the 2008 Lexus IS, in addition to traction and stability control. According to the Orlando Sentinel, the anti-lock brakes provide brake-force distribution and assist, and the 2008 Lexus offers side and side curtain airbags, as well as knee airbags. The reviewer adds: "very BMW-like, there's a first-aid kit."

Safety options in the 2008 Lexus include accident-avoidance features. The Lexus IS's Pre-Collision System is packaged with the Dynamic Radar Cruise Control feature, which uses radar to detect obstacles out in front. If the onboard computer determines an unavoidable collision is imminent, the system stiffens up the suspension, tightens up the seatbelts, and pre-initializes the brake assist in preparation for impact. According to Cars.com, a backup camera is available as well.

Used Lexus IS for sale near

The 2008 Lexus IS has plenty of standard features, and cutting-edge options are offered, too.

Every review that TheCarConnection.com has seen has heaped praise on the 2008 Lexus IS 250 for its many useful and high-tech features.

Standard features, according to Cars.com, include "a standard Smart Access keyless entry system with a push-button engine starter." Cars.com reports the following options for the 2008 Lexus IS 250: "ventilated front seats, dynamic radar cruise control, a power tilt/telescoping steering wheel and a navigation system that incorporates a backup camera."

The Orlando Sentinel is especially complimentary regarding Lexus IS features: "Instruments and controls are thoughtfully designed, and the navigation system is very easy to use, one of the best offered." Edmunds's opinion is in line with the Orlando Sentinel, calling the Lexus IS's electronic interfaces "one of the best...in the luxury game, with easy to use controls all around." The navigation system of the 2008 Lexus, which can be a bugbear on many vehicles, is described at Edmunds as "particularly friendly."

In addition to a user-friendly navigation system, audiophiles will enjoy the 13 (count 'em, 13) speakers in the sound system; a retractable moonroof is also available. Both of these features are standard on the IS 2008 Lexus, according to the Orlando Sentinel.

Be the first one to write a review on 2008 Lexus IS
Rate and Review your car for The Car Connection! Tell us your own ratings for a vehicle you own. Rate your car on Performance, Safety, Features and more.
Write a Review
Browse Used Listings
in your area

8.4
Overall
Expert Rating
Rating breakdown on a scale of 1 to 10?
Compare the 2008 Lexus IS against the competition
Compare All Cars
Looking for a different year of the Lexus IS?
Read reviews & get prices
Related Used Listings
Browse used listings in your area
See More Used
The Car Connection Daily Headlines