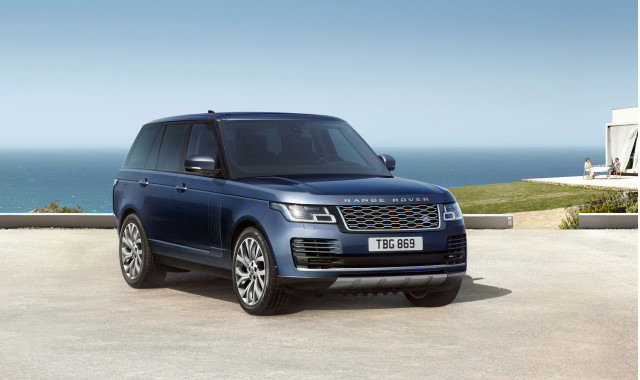 The standard-wheelbase Range Rover provides plenty of rear-seat room and will be much easier to park.

The 2021 Range Rover is a true flagship—not just for its maker, but for SUVs in general.

What kind of vehicle is the 2021 Land Rover Range Rover? What does it compare to?

Perched at the top of the SUV mountain, the 2021 Land Rover Range Rover is an ultra-luxurious SUV. Compare it to the Mercedes-Benz GLS-Class, BMW X7, and Cadillac Escalade.

Is the 2021 Land Rover Range Rover a good car/SUV?

The Range Rover lineup celebrates its 50th anniversary this year, though it has only been in the U.S. for a little over 30 years. In that time, the big Rover has only been reworked four times, and the current model is just starting to show its age. Still, this is a fine, full-feature SUV that coddles in ways rivals still haven’t figured out, and its capability is nearly unmatched.

This year, the Range Rover celebrates its 50th anniversary with three several special editions, one of which celebrates the nameplate’s big year.

The Range Rover comes in two versions, the longer of which adds nearly eight more inches of rear leg room. Last redesigned for the 2013 model year, the look has become somewhat familiar, but it’s still stoic and elegant outside, and full of tech and luxury inside.

Short-wheelbase versions can be had with turbocharged inline-6 engines that put out between 355 and 395 hp, depending on the trim, a surprisingly frugal turbodiesel V-6 rated as high as 24 mpg combined, or even in plug-in hybrid form with a turbo-4 linked to an electric motor and a battery good for nearly 20 miles of electric-only driving.

Optional on short-wheelbase Rovers and standard on long-wheelbase versions is a 5.0-liter V-8 that puts out between 518 and 557 hp, enough to drop the 60-mph sprint to a hair over five seconds.

No matter what’s underhood, look for an 8-speed automatic transmission plus a proper two-speed transfer case and plenty of off-road goodies that give this luxurious ride serious capability unlikely to be explored by most owners. Hey, it’s there!

Even base Range Rovers are plenty plush inside, while high-zoot Autobiography versions are among the most opulent cars on the road today.

How much does the 2021 Land Rover Range Rover cost?

The lineup starts at about $93,000 and climbs rapidly from there. Most buyers will be fine with the base powertrain, though we can’t blame you for exploring the turbodiesel or even the throaty V-8s.

Land Rover offers a staggering array of optional equipment, and we recommend adding the Drive Pro Pack with its adaptive cruise control and the Park Pack with its useful surround-view camera system, at the very least.

Where is the 2021 Land Rover Range Rover made?

The stately Range Rover will be mistaken for nothing else.

Is the 2021 Land Rover Range Rover a good-looking car?

The Range Rover hasn’t changed much since 2013, but it remains a beautifully-detailed SUV both inside and out. We award it 9 out of 10, with a few more of those points going to its lavish interior.

Styling cues from the 1970 original abound, including the tall greenhouse and slab sides. Land Rover offers a huge palette of interior colors, many of which cost as much as a British Airways business class ticket to England should you wish to watch your new SUV being sprayed, so spend your money wisely.

Inside, the basic design isn’t as impressive as the materials and attention to detail. Land Rover has hidden most switches and integrated them into one of two touchscreens, which do take some acclimation to sort through. Like the exterior, interior choices can take some time to select—especially on higher-end versions. Don’t settle.

Quick in any form, the Range Rover is perhaps most impressive for its ability to balance on-road comfort with off-road supremacy.

Of course! Every Range Rover is ready to tackle a serious trail, and various option packages add even more ability like a locking rear differential. Go easy on the big wheels should you plan to use yours off-road, however, as those short sidewalls are like magnets for rocks.

How fast is the Land Rover Range Rover?

The sheer breadth of this engine lineup will be enough to have you test-driving different versions all day.

Short-wheelbase models offer every engine, from turbo-6s with plenty of power in any situation to a turbodiesel V-6 that is quiet, quick, and quite frugal. The gasoline 6-cylinders use mild-hybrid tech to deliver a little extra punch and to slurp down a little less fuel.

The oddball in the lineup is the gasoline-electric hybrid, which pairs a 2.0-liter turbo-4 to a 114-hp electric motor and a 13.1-kwh lithium-ion battery. Total output of 398 hp is plenty, but we’ve found the hybrid engine to be lacking in refinement. Its best feature is its 19-mile electric-only range, a worthy option for drivers with a relatively short commute.

Range Rovers have had V-8s underhood since the beginning, so we can’t blame you for picking between one of the two 5.0-liter V-8 tunes: 518 hp or 557 hp in megabuck SVAutobiography trim. This strong V-8 is a charmer, even as it slurps down fuel like it’s 1995.

Our choice: one of the 6-cylinder engines will be fine, but no one will hold a 557-hp Range Rover against you.

No matter the engine, a slick 8-speed automatic transmission shifts power to all four corners.

Underneath, the height-adjustable air suspension squashes molehills and mountains for a ride just the right side of plush, even with bigger wheels that have shorter sidewalls. The air suspension helps endow the Range Rover with gravity-defying handling. Pushed hard into a corner, this big SUV leans over just enough to remind you that it can weigh 6,000 pounds in high-zoot trims. Steering feel is good for a big SUV.

SVAutobiography Dynamic versions handle even better. These SUVs aren’t fun in a conventional sense, but there’s something smile-inducing about hustling a massive ‘ute down a winding road and feeling more confident with every bend.

Opulent, well-wrought, and spacious. The Range Rover wants for nothing inside.

Six figures should of course buy you a fine SUV, but there are few nicer inside than the Range Rover.

Even those Rovers theoretically available for under $100,000—which will probably need to be special-ordered—are nice enough to earn a perfect 10 on the TCC scale for comfort and quality.

The firm, chair-like front seats are the place to be, especially with optional cooling and massaging. Well, unless you opt for the Executive Seating Package available on higher trims that swaps the second-row bench for nearly as much adjustment plus a smartphone app that lets riders adjust climate controls while composing their latest tweet.

Cargo space is surprisingly modest, owing to the heft of the rear bench. Standard versions have a so-so 31.5 cubic feet behind row two, while Executive models slice about seven cubes from that. Fold the rear seats in long-wheelbase Rovers, though, and you’ll find 75 cubic feet of room.

Materials are opulent to begin with and get even better the more you spend. Just allocate some time to sort through the numerous trim finishes Land Rover offers on its most luxurious model.

How safe is the Land Rover Range Rover?

If its curb weight—figure 5,000 pounds with a tank of fuel for even the fleetest of foot version—is anything to go by, the 2021 Range Rover should hold up well in a crash.

Still, it hasn’t been tested by the IIHS or the NHTSA, so we can’t assign a score here.

All Range Rovers come with the basics we expect: automatic emergency braking, parking sensors, blind-spot monitors, and active lane control. Adaptive cruise control is optional on lower trims, standard otherwise. At the very least, plan to add the Drive Pro Pack and perhaps one of several option packages containing the surround-view camera system that will make this land yacht easier to moor.

Though hardly a bargain, the 2021 Land Rover Range Rover is plush in every form.

Thew 2021 Land Rover Range Rover comes well-equipped from the start and offers a staggering array of options, though its infotainment system and dual-screen displays can frustrate. We rate it at 8 out of 10.

Which Land Rover Range Rover should I buy?

Most buyers will be well-served by the shorter wheelbase, and even then the mid-level HSE with a few options should do everything needed.

Figure around $110,000 with extra-cost paint and a number of popular options, but be aware that the Range Rover can get massively expensive once you start adding on extras.

How much is a fully loaded 2021 Land Rover Range Rover?

You may want to be sitting down when your dealer hands you the bill for a fully-loaded SVAutobiography. After paying $23,500 (yes, really) for special paint (it is very pretty), $4,500 for quilted leather seats (they are quite comfortable), $1,225 for especially exotic woods (it would be a travesty not to), a few hundred bucks for wade sensors (for off-roading, because you never know), another $11,350 for arena-like seats that attach to the tailgate (we wouldn’t want to sit anywhere else), and a few other niceties, you’ll be looking at a nearly $260,000 SUV.

The Range Rover has a 4-year, 50,000-mile warranty. Jaguars include free maintenance, though, and the Rover misses out on an extra point here.

The big Range Rover is hardly thrifty, though some versions are somewhat frugal.

Is the 2021 Land Rover Range Rover good on gas?

Generally speaking, no, the 2021 Range Rover is not a green choice—even painted in extra-cost British Racing Green.

The V-8s are guzzlers. Expect as low as 13/19/15 mpg for the SVAutobiography in long-wheelbase form.

Premium fuel is, of course, required.

Be the first one to write a review on 2021 Land Rover Range Rover
Rate and Review your car for The Car Connection! Tell us your own ratings for a vehicle you own. Rate your car on Performance, Safety, Features and more.
Write a Review
USED PRICE RANGE
$90,995 - $183,991
Browse Used Listings
in your area
7.8
Overall
Expert Rating
Rating breakdown on a scale of 1 to 10?
Compare the 2021 Land Rover Range Rover against the competition
Compare All Cars
Looking for a different year of the Land Rover Range Rover?
Read reviews & get prices
Related Used Listings
Browse used listings in your area
The Car Connection Daily Headlines