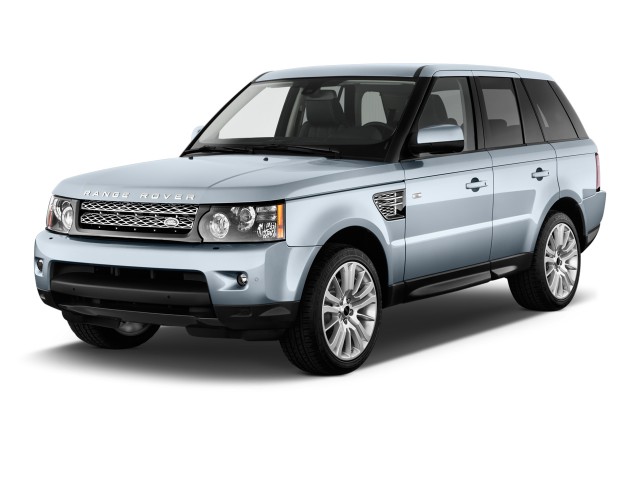 There's a real off-road-worthy vehicle lurking under the Range Rover Sport's slanted, sleek body--so make sure that's what you seek before you buy.

An impressive performer both on and off-road, the 2012 Land Rover Range Rover Sport has the broadest reach of any luxury SUV we know.

A reimagined version of the Range Rover, on a different platform and without the ultimate set of off-road talents, the 2012 Land Rover Range Rover Sport is nonetheless our ideal substitute for the ritzy SUV with the big royal following. Why? Almost shocking acceleration for a vehicle of its size and weight, with enough of the off-pavement ability to uphold the promise its name makes across savanas and veldts worldwide.

The smaller, sleeker Range Rover Sport has something in common with the utilitarian Land Rover LR4 under its skin, but it's a completely different look--far more kin to the big Range Rover, with the most significant departure being its scaled-down proportions and the slant of its tailgate. It comes across as a little more defined, even inside, where the very cozy cockpit is divided by a wide center console into nacelles for four passengers. It's a blend of utilitarian controls with luxury finishes, and it works, particularly well since a major renovation in the 2010 model year.

The Sport sports a choice of two drivetrains, either one a fitting source of power. There's a naturally-aspirated 5.0-liter V-8 with 375 horsepower and 375 pound-feet of torque version in the HSE. With a supercharger, it twists out 510 horsepower and 461 pound-feet of torque. Acceleration is brisk--especially for something that weighs well in excess of 5,500 pounds. The HSE scoots to 60 mph in 7.2 seconds, the Supercharged in a scant 5.9 seconds. Either is teamed with a brainy all-wheel-drive system and a six-speed automatic transmission.

Outfitted as such, the Sport makes its talents known in the mud as well as it does in corners. It's truly surprising how tenaciously it clings to the road, and how deep a stream it can ford, but sometimes the ride quality gets a little rough and bouncy, reminding you that the gulf between its extremes is a vast one. The available adaptive suspension goes a long way to soothing ruffled ride motions.

Inside, the Range Rover Sport wavers between snug and tight. It's not a roomy cabin by any means, and four adults will find comfortable spaces for relatively long road trips--but not much additional space for their belongings or the occasional yawn and stretch. The cargo hold's especially small, with a high floor.

Neither the NHTSA or the IIHS has crash-tested the Sport, but it offers blind-spot monitors and a rearview camera, along with the stock and trade stability control and all-wheel drive. What it can't do is much for your carbon footprint--gas mileage is abysmal on an absolute scale, and low even for its luxury class.

Sleek for its size, and undeniably stylish, the 2012 Land Rover Range Rover Sport is the refined, urban counterpart to the decidedly woodsy Range Rover.

Upright sides and a vertical front end, contrast with the sloping window and roof lines of the Sport, giving it the look to bear its name. Part classic Land Rover, part modern super-SUV, this is the most high-performance Range Rover you'll find--and it looks it.

Inside, the design is more of the same: classic Range Rover rectilinearity mixed with high-tech displays, a wealth of knobs and buttons to control the traction system, and fantastically finished materials, whether leather, wood, or plastic.

The gauges and displays are all easy-to-read, whether you choose the HSE or the faster Supercharged model. Both versions of the Range Rover Sport looks quite similar too, though aficionados will be able to spot the minor clues.

Far more capable than you'd expect any 5,500-plus-pound vehicle to be, even in "base" HSE trim, the 2012 Range Rover Sport is a force to be reckoned with on-road, and able to acquit itself surprisingly well off-road, too.

The HSE version uses a naturally-aspirated 5.0-liter V-8 engine rated at 375 horsepower and 375 pound-feet of torque. That's enough to haul the big SUV to 60 mph in just 7.2 seconds, and likely as much power as most buyers will need--or want.

For those with a thirst for massive power, there's the Supercharged. With a supercharger added to the 5.0-liter V-8, it generates 510 horsepower and 461 pound-feet of torque for blistering 5.9-second 0-60 mph runs. Both Range Rover Sport trims come with standard all-wheel drive, six-speed automatic transmissions, and advanced dynamics and traction control systems.

While the Range Rover Sport, and the Supercharged model in particular, give up some off-road capability in trade for superior on-road handling and speed, both are still capable of impressive off-road feats. The stiff suspension of the Sport makes it somewhat less comfortable than the standard Range Rover, however, and the street-tread tires don't do as well when grip is minimal.

Perhaps best of all, however, is how easy Land Rover makes it to access all of this performance. Behind the scenes, a symphony of differentials, electronics, and sensors combine to do amazing things to manage traction, speed, and driver control--but the driver doesn't need to understand how they work in order to use them. Just turn the knob or press the touch-screen button to suit the conditions and you're set.

Though it's smaller inside than you'd expect, and can be noisy at high speeds, the 2012 Range Rover Sport's cabin is comfortable, well-built, and well-finished.

Interior space is somewhat less than its exterior size would indicate, especially in the rear cargo area, but the cabin offers plenty of storage nooks for smaller items. Passenger space front and rear is very good, even for tall adults.

The entire cabin is lined in high-quality leather, wood, and wool carpeting, which fits the experience you'd expect at the Range Rover Sport's price point. Ride quality can be a bit stiff, but that's the price paid for so much handling and performance.

Wind, road, and engine noise is minimal, though they rise as the speed does, becoming truly noticeable only at extra-legal speeds. As with any vehicle, particularly those with wide tires, some road surfaces can induce tire noise as well.

Without official crash-test scores, the 2012 Range Rover Sport has to rely on its excellent array of standard safety equipment to convince buyers of its safety.

The Supercharged model is also available with radar adaptive cruise control that works with the emergency braking system to scan the road and detect possible collisions, aiding the driver in braking.

Both versions of the Range Rover Sport offer excellent visibility thanks to plenty of glass, a low beltline, and a high seating position, though rearward visibility is somewhat reduced by thick pillars at the very back of the vehicle.

The 2012 Range Rover Sport's high sticker price includes a wide range of high-tech standard equipment, and there are many options to add to the package.

As high-tech as it is fast and luxurious, the 2012 Range Rover Sport relies on a pair of screens--one 5-inch TFT mounted in the instrument panel, and a larger touchscreen in the center of the dash--for driver-vehicle communication. These interfaces provide a wealth of information, access to settings, and control over the vehicle's function and features.

For off-roading or performance driving, the Adaptive Dynamic System and Terrain Response System readouts are particularly useful, displaying real-time workings of the differentials and wheels.

The instrument panel shows even more information, and can be driver configured to display trip, speed, and other information. The Dynamic program is controlled by a center-console knob, allowing the driver to choose the drivetrain setting to suit the surface.

Aside from the difference in engines, the primary differences between the Range Rover Sport HSE and Supercharged are the options. Most of the Supercharged's standard gear is optional on the HSE. Upgrades for either model include a rear-seat entertainment system, a beverage cooler, and a wide array of interior individualization.

The 2012 Range Rover Sport is exactly what you'd expect of a large, high-performance luxury SUV: not very efficient.

As a large, luxurious, and powerful SUV, the 2012 Land Rover Range Rover Sport isn't built to get good gas mileage, and it doesn't.

Rated at 13 mpg city and 18 mpg highway in HSE trim, or 12 mpg city and 17 mpg highway in Supercharged guise, the Range Rover Sport is going to burn some gas, no matter what you do with it--but given its on- and off-road capabilities, it'll be money well spent. Long-distance commuters might want to consider other options, however.