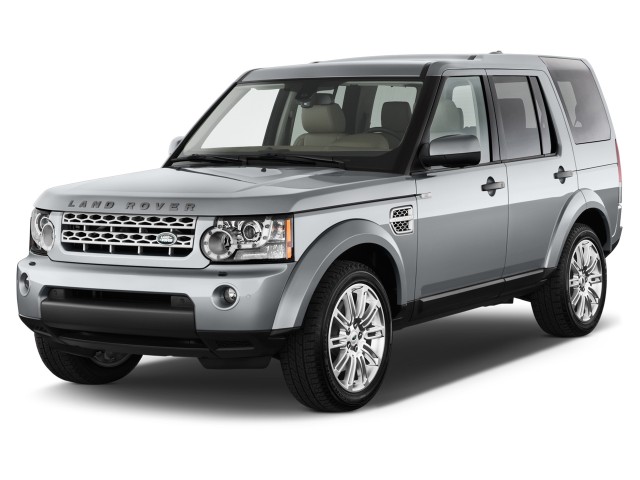 The third tow is very tight, with an odd, elevated position, so you might just want to stick with a five-passenger version.

The 2012 Land Rover LR4 is a burly off-roader with a luxurious, high-class interior; just don't expect it to handle or perform like a car or crossover.

Land Rover's boxy, traditional-looking off-road-focused model was given a thorough refresh, a new engine, and other improvements a couple of years ago, gaining the name LR4 (replacing LR3). Now, the 2012 Land Rover LR4 gets a number of improvements inside, with its audio, connectivity, and navigation systems all updated.

Visually, the LR4 is the most conservative and classic of Land Rover's models--and perhaps one that's most instantly recognizable as a Land Rover, other than the Range Rover. With its upright, safari-chic look—with a tall, boxy body and short overhangs—it shares plenty with the smaller LR2 and the big Range Rover. Inside, the LR4 gets all the details right, clearing out the plasticky bits of the former LR3 in favor of a better-organized dash, with trims done in rich wood veneers and softer-touch materials.

The LR4 looks tall and tough, maybe tipsy, but it's really more graceful and coordinated than you'd guess. You won't find the LR4 at all lacking in power, either. Its 375-hp, 5.0-liter V-8 engine pushes the heavy LR4 with enthusiasm, making it feel almost nimble. 60 mph comes in less than 7.5 seconds, which is relatively quick for this kind of vehicle. A six-speed automatic transmission teams with four-wheel drive to give this SUV confidence, provided you're not steering or braking too quickly. The LR4's rather numb, long-ratio steering and tall driving position aren't exactly reassuring, but when pushed to the task the LR4 can be hustled through tight curves with better body control than you'd ever think possible for an almost-6,000-pound ute. Fuel economy, too, remains abysmal, at 12 mpg city, 17 highway.

But there's no hiding that off-road is where the LR4 really hits its stride. Last year, Land Rover made Hill Start Assist, Gradient Acceleration Control, and an improved Terrain Response system standard on all LR4 models. With those aids plus stout construction, a four-corner, independent, height-adjustable air suspension, the 2012 LR4 has impressive capability on and off the trail. Land Rover's exclusive Terrain Response system (with separate modes commanding the behavior of an armory of electronics for several different driving conditions, such as "mud and ruts" or "sand and dunes") helps select the right settings for all the components, to fit the terrain.

The is available in five- and seven-passenger versions, and both of them include top-notch comfort for the first two rows, a hushed, refined cabin, and a reasonably plush ride. Even with the front seats scooted back for tall occupants in front, there's enough adult knee room in back and a good view outward for the first two rows.

The 2012 Land Rover LR4 starts at around $50,000, but it feels every bit the part of a luxury vehicle, and the controls and features are fuss-free. In recent years, the LR4's navigation system and screen-based interface has closely mirrored the one offered in Jaguar vehicles, and we like the simple, intuitive layout. The list of standard features is long and includes Bluetooth, rear parking distance control (recommended), dual-zone climate control, and a nine-speaker Harman Kardon sound system, while upper-level HSE LUX models get goodies like bi-xenon headlamps, power heated mirrors, a heated steering wheel, heated washer jets, a navigation system with off-road features, and front park-distance control. For 2012, the nav system has been upgraded with traffic-message capability and voice activation; the top harman/kardon audio system now powers to 825 watts, and the rear-seat entertainment system has been updated.

It's a sport-ute in the classic mold, but the Land Rover LR4 doesn't lack for modern, tasteful details.

Even taking the iconic Range Rover into account, the LR4 is the most conventional, conservative-looking SUV Land Rover builds. From its earliest days as a Discovery, to last generation's LR3 badge, to now, the LR4 has banked on authentic, rugged appeal to distinguish it from the onslaught of car-based crossovers and their sexier curves and cues.

To our eyes, the LR4 works very well. It's safari chic done well--the boxy, tall body underplays its roots where other SUVs go the comical route. It fits in the Range Rover lineup easily, but it's easy to pick it out of the lineup thanks to the bump-up in its rear end. Gradual updates in 2010 and 2011 have refined the grille and taillamps, without inflicting too much radical change.

The interior of the LR4 excels in the details—something that wasn't necessarily true with its predecessor, the LR3. It feels fresh, as it swaps out the plasticky bits of the LR3 for a suave leather-trimmed dash with rich wood trim, softer-touch materials, and far more logical placement of controls. High-end trims get perks like walnut trim and premium leather with new stitching.

That said, just as in other Land Rovers, the interior is still a little busy, with more individual buttons than other luxury vehicles. There's been less condensing controls into a centralized interface—a trend that's followed the popularity of smartphones and the like—but many will appreciate it.

It's not clumsy on pavement, but the Land Rover LR4 truly shines when the pavement goes away.

Its BMW and Ford roots moving into its past now, the Land Rover LR4 carries over its drivetrain from a 2010 revamp, and it's a thirsty setup, but one with lots of off-road grunt and muscle.

The LR4's sole engine is a 5.0-liter V-8, shared with Jaguar and impressively responsive as a result. The 375-horsepower V-8 relieves some of the hefty driving feel of the LR4--it's almost quick now, with LR estimates putting a 0-60 mph run at about 7.5 seconds. It's a smooth shifter, too, with a six-speed automatic fused to its four-wheel-drive system, but ultimately, performance is instantly recognizable as SUV--mostly, because the LR4 sits high and weighs almost 6,000 pounds.

It may not be as effective on pavement as a crossover vehicle, but the LR4 is uniquely suited to off-roading. While you're on the road, the LR4 can feel a littly tipsy: it rides high, but cornering ability actually is impressive, thanks to a fully independent suspension coupled to height-adjustable air springs. It leans into every corner, and doesn't inspire drivers to seek out more canyon roads, but the LR4 doesn't feel unsettled as it bends into curves--it just telegraphs its size and its original intent.

The LR4 hits its stride when the pavement disappears. The adaptable suspension teams up here with Terrain Response, LR's off-road system that uses electronics to control different driving behaviors, which the driver can choose by a rotating knob on the console ("mud and ruts" or "sand and dunes"). A central-locking differential engages when conditions warrant maximum grip. Terrain Response has seen regular improvements over the years, and in 2011 it added Hill Start Assist and Gradient Acceleration Control modes, which help tackle steep slopes that are either loose or slippery.

Land Rover also upgraded the LR4's brakes in the 2010 model year, for shorter stopping distances as well as better pedal feel. They do feel improved, but there's still a lot of nosedive and excess body motion when you stomp on the brakes firmly.

A refined, quiet cabin and top-drawer comfort are hallmarks of the latest Land Rover LR4, but wedge adults into the third row and you'll be forgoing nearly all your cargo space.

From the driver's seat, the LR4 affords a great view of the road ahead, as it retains the classic high driving position of truck-based SUVs. It's no crossover, but the LR4 still is comfortable--its bucket seats are shaped well, clad in leather, and are fitted with infinitely adjustable armrests. Knee room is a little lacking, though, since the center console is wide and the overall width isn't too great.

Passengers in the second-row seats will find easier accommodations. The ride height requires a step in that isn't needed any more in carlike crossovers (like Land Rover's own LR2), but the seats themselves are firm enough for passengers to enjoy a long ride, and visibility is good since the second row is positioned slightly higher, in a stadium-style configuration.

We'd suggest the third-row seat only for those who have a regular need for it--carpoolers or large families. The third row sits even higher than the second row, and the cushion sits high, which means even with a slightly raised roof in back, rear-seat headroom is reduced so that only small adults and children will have enough head room.

Second- and third-row seats can be folded completely flat to open up a vast cargo space of up to 90 cubic feet. Factor in two gloveboxes, huge cupholders, and plenty of cubbies for smaller items throughout, and the LR4 has the goods for a cluttered, frenetic family environment.

The predecessor LR3 had a reputation for unreliable operation, and the LR4 swaps in new electronic controls for the entire vehicle and a new engine-so buyers should understand both before signing on.

It comes with the usual standard safety features, and offers some electronic safety upgrades, but the Land Rover LR4 is still waiting on official crash-test scores.

The LR4 has not been crash-tested by either the IIHS (Insurance Institute for Highway Safety) or the NHTSA (National Highway Traffic Safety Administration).

However, it does have the mandatory features covered, from side airbags and curtain airbags that protect the front two rows of seats, to anti-lock brakes and stability control, both with an integral off-road mode. Order a seven-seat model and the LR4 also gets separate side curtain bags to protect those rearmost occupants.

Active (swiveling) headlamps are available in the LR4, while parking sensors and a rear camera system help with visibility; but overall outward visibility is surprisingly good, thanks to the elevated seating position.

With features rivaling those of the bigger Range Rover, the Land Rover LR4 takes its family-luxury mission seriously.

The Land Rover LR4 is priced from about $50,000, so it's not surprising to find a raft of luxury features in each one.

On the options list for the LR4 are satellite radio; a cooler box; and adaptive headlights. There's also a safety package that bundles HID headlamps, adaptive front lighting, automatic high-beam assist, an upgraded surround camera system, power-folding mirrors, and Trailer Assist and Trailer Hitch Assist. It's offered only on the HSE models, though.

The Land Rover LR4's gas mileage is very low, even in the class of seven-seat SUVs.

Fuel economy is rarely a strength for SUVs, but mid-size utes tend to do better than their big brothers. That's not the case with the Land Rover LR4, though.

The EPA rates the LR4 at 12/17 mpg for its sole drivetrain configuration, a V-8 with four-wheel drive. That puts the LR4 in the same range as the Range Rover, not to mention truly large SUVs like the Nissan Armada. Even the Chevy Tahoe earns more respectable ratings.

Review continues below
The LR4's near the bottom of the ratings, and considering some versions are only good for five passengers, it gets a very low rating from us. What's worse, the LR4 also requires premium gasoline, which will drive your fuel budget even higher—though if you're a buyer of this model that probably isn't of much concern.
Continue Reading

Be the first one to write a review on 2012 Land Rover LR4
Rate and Review your car for The Car Connection! Tell us your own ratings for a vehicle you own. Rate your car on Performance, Safety, Features and more.
Write a Review
USED PRICE RANGE
$9,990 - $24,494
Browse Used Listings
in your area
7.8
Overall
Expert Rating
Rating breakdown on a scale of 1 to 10?
Compare the 2012 Land Rover LR4 against the competition
Compare All Cars
Looking for a different year of the Land Rover LR4?
Read reviews & get prices
Related Used Listings
Browse used listings in your area