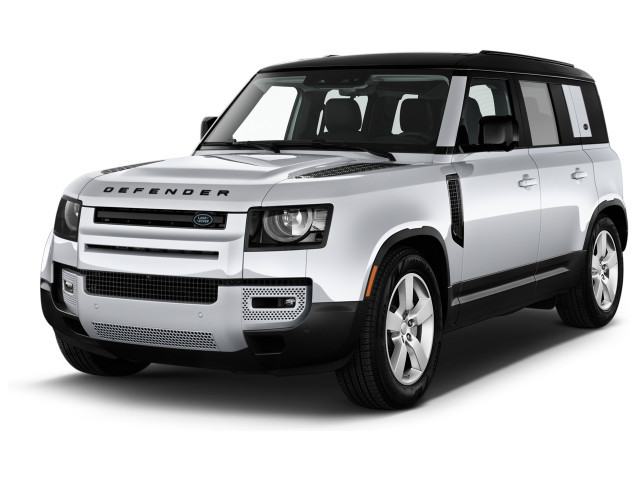 The 2020 Land Rover Defender is a return to the U.S. for the boxy off-roader that helped start it all. This time with far more creature comforts.

After a long hiatus from sales in the U.S., Land Rover’s iconic rough-and-tumble off-roader is back for 2020.

The Land Rover Defender is a tall boxy SUV that’s the godfather to many luxury SUVs today. In its newest iteration, the Defender is just as tall, just as boxy, but with far more luxury conveniences than its predecessor. The outgoing Defender looked like the boxes they were shipped in—and were just as comfortable sometimes. Like the outgoing model, Land Rover offers the Defender in 90 and 110 body styles with two or four doors, respectively.

With the Defender, Land Rover has an upmarket off-roader to compete with well-heeled Jeep Wrangler buyers. The Defender costs at least $50,925 for a base turbo-4 Defender 110 but a top-trim Defender with an inline-6 can run up the tab to more than $81,000, before options, like only a Land Rover can.

The new-look Defender sheds the barn-door aerodynamics of the outgoing version that was discontinued in the U.S. 22 years ago for an upright off-roader with just a few rounded corners.

The Defender 90 and Defender 110 look identical from the front and have blunt, boxy faces with inset lower front bumpers, thick horizontal lines, square shoulders, and an asymmetrical Land Rover badge that floats in a sea of right angles.

Along the sides, the 90 and 110 separate—the 110 has a longer wheelbase by 17.2 inches and two more doors to accommodate up to seven passengers—but both have chunky roof pillars, tall window sills, big wheels, and high-mounted windows in the roof, sometimes called “alpine windows”—all Land Rover signatures.

The tailgate-mounted spare tire is another heritage nod, but the LED taillights and rear-end are all about today—the four rounded squares in the rear are a far cry from the Defender’s heritage scattershot light array.

Inside, the Defender strays further from the old formula with updated touchscreens and convenience features instead of blocky switchgear and tall shifters. The 90 and 110 are dead-ringers for luxury off-roaders inside, a block-letter “DEFENDER” across the dash is the only cue that you’re not sitting in one of Land Rover’s other swank SUVs.

Under the hood, the Defender is available with a turbo-4 or inline-6 engine, the latter with mild-hybrid assist.

The turbo-4 makes 296 horsepower and drives all four wheels via an 8-speed automatic. Despite the 110’s hefty weight of about 2.5 tons, which rivals many full-size pickups and even heavy-duty trucks powered by V-8s, Land Rover says the turbo-4 will power the Defender 110 to 60 mph in 7.7 seconds.

Land Rover’s new inline-6 is available in Defender 110 models and standard in 90 models and makes 395 hp. It’s teamed to a mild-hybrid system that makes the engine marginally more efficient and it drives all four wheels via an 8-speed automatic. Land Rover says Defenders equipped with an inline-6 will speed up to 60 mph in less than six seconds.

The new Defender rides atop double wishbones up front, a rear independent integral link suspension in back, and a unibody construction, which is a first for the SUV that traditionally has been built on a solid frame like a pickup truck. The new Defender is far more road-focused than the outgoing version, although Land Rover says it can ford up to three feet of water and its wheels can articulate more than 20 inches, with 11.5 inches of ground clearance and 10 inches of front suspension travel. By comparison, the Jeep Wrangler Rubicon has 10.8 inches of ground clearance, can ford up to 30 inches of water, and has up to 8 inches of front suspension travel.

The Defender 110 offers up to three rows of seats for up to seven passengers, although the optional third row is meant for only two smaller passengers with just 20.5 inches of leg room. With the third row in place, the 110 carries only 10.7 cubic feet of cargo, which is less than many subcompact sedans. With the third row stowed, that space grows to more than 34 cubic feet, which is roughly the same as a Land Rover Discover with its third row folded. Fold down the second row and the 110’s interior space grows to 78.8 or 69 cubic feet, depending on the configuration.

On some Defenders, the front row can accommodate the driver and two passengers—the “jump seat” is a nod to heritage Land Rovers—provided everyone has very narrow shoulders.

Second-row riders get at least 38 inches of leg room (more if a third row isn’t equipped) with USB chargers and plenty of hip room from the wide bench seat. Thanks to the squared-off roofline, the Defender’s second row gets just as much head room as the first row: more than 40 inches.

Defender 90s can be configured for up to six people with the front jump seat and second-row bench. Behind the second row, the Defender 90 carries 15.6 cubes of gear, 58.3 cubes with the second row folded.

Land Rover makes blind-spot monitors standard on the Defender. Automatic emergency braking, active lane control, parking sensors, adaptive cruise control, and a surround-view camera system are all on the options list. The Defender can be equipped with a camera system that virtually removes the hood of the car for off-roading, which is a system that made its debut on the Range Rover Evoque.

When it goes on sale, the 2020 Defender will be available in base, S, SE, HSE, X, and First Edition trim levels. Land Rover will also make available several personalization schemes including Explorer, Adventure, Country, and Urban packs with unique upgrades.

Some of our favorites: a 1.7-gallon water reservoir and spray nozzles for washing off mud or muddy dogs on the go; a factory-installed electric winch; raised air intakes; and roof, side, and anywhere-else-you-can-find gear carriers.

The Defender will go on sale in the first half of 2020.

Be the first one to write a review on 2020 Land Rover Defender
Rate and Review your car for The Car Connection! Tell us your own ratings for a vehicle you own. Rate your car on Performance, Safety, Features and more.
Write a Review
$49,900
MSRP based on 110 AWD
Change Style

Trim
Other
See Your Price
Compare the 2020 Land Rover Defender against the competition
Compare All Cars
Looking for a different year of the Land Rover Defender?
Read reviews & get prices
Related Used Listings
Browse used listings in your area