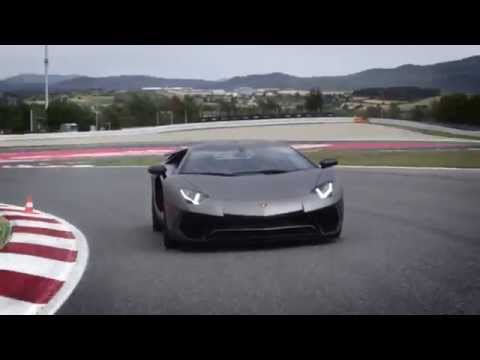 If you're drooling in anticipation at the Aventador SV, know that it gets one major update next year, an update you might lose your lid over—a convertible version is coming in the form of the Aventador SV Roadster.

The 2016 Lamborghini Aventador doesn't just grab your attention: it lunges across the table, locks eyes with you, and dares you to take things to the next level.

The Aventador is Lamborghini’s top production model, and as such is its most high-powered standard offering, whether in coupe or roadster form. It’s also the most head-turning Lamborghini available to most folks—a handful of even more exotic, small-batch cars have been built, but the Aventador’s edgy style remains a crowd-pleaser.

The Aventador has the exotic-supercar formula nailed. Start with a hypercharged, eyeball-blasting look—really, a confection of angles and lines and scoops—and toss in liberal amounts of horsepower, V-12 harmonics that soothe and split eardrums at the same time, and a track-ready edition that convinces above-average drivers that they're ready for 200-mph-plus heroics.

Oh, and then toss in a more powerful limited edition in the form of the Aventador SV, new for the 2016 model year.

Inside the cabin it’s much the same: futuristic, edgy, and jet-inspired. The space doesn’t feel much like a typical street car at all; it feels more like a Tie Fighter straight out of "Star Wars."

The Aventador's wailing 6.5-liter V-12 engine is rated at 691 horsepower. It uncorks its ferocious V-12 life rattle right behind the two seats in the snug, low-slung cabin. That massive power, pushed to all four wheels through an independent shifting rod (ISR) automated manual transmission, is 0-60 mph acceleration in under three seconds, and a top speed claimed at 217 mph.

It gets better. The Aventador SV is rated at 739 hp, up 48 hp on the standard car. It sheds about 110 pounds thanks to more extensive passages of carbon fiber and from some deleted features like an infotainment system. It's pegged at a 0-60 mph run in under 2.8 seconds—about a tenth quicker than the standard Aventador—and runs off top-speed numbers estimated at more than 217 mph.

Driving the Aventador requires a come-to-god moment, wherein you reconcile its razor-sharp looks with its 3,700-pound curb weight and paddle-shift transmission. It's lightning-bolt quick in a straight line, but can lag in corners as it battles its weight, its width, and its all-wheel-drive system for a scalpel-clean line.

On the streets, the ISR transmission can be rough, even in Strada mode. It’s slow to engage, resulting in a herky-jerky take-off from a stop. Swap to Corsa mode and the shifts become lightning fast—and hit-by-a-bus brutal. The happy medium lives in Sport mode, where the shifts are quick enough to be comfortable, but not so violent. Cycling those same modes also helps its ride smooth out: it's always rather stiff, but not always objectionably so.

Its immense width can also make the Aventador feel somewhat cumbersome around town, when parking, or navigating narrower lanes and streets, though a self-raising nose feature does help improve clearance over speed bumps and driveways.

The Aventador SV feels smarter, and sharper, on the track. It gets adaptive magnetic suspension, which adjusts at each wheel during cornering, largely suppressing body roll and making the steering and handling even more responsive. The adaptive damping also counteracts brake diving. it also has electric power steering, which variably adapts the steering ratio to road speed and to the dynamic mode selected. It cuts in immediately in tight corners, which with the liberal amount of rotation allowed at the rear end, gives the Aventador SV a playful feel that we'd normally describe as tossable, except it's happening at 150 mph plus, when you don't want to toss...anything.

Inside the cabin itself, the Aventador isn’t especially spacious, despite its width. The low-slung nature and scissor doors mean you have to half-slide, half-fall into the seats. Once there, the seats are snug, and leg room is enough, but not ample, especially for 6-footers. Fitting a weekend’s worth of luggage in the front trunk area is possible, but it’s tight.

The SV's interior has been completely revised with a clear focus on weight reduction. The new sports bucket seats and the door panels are made of carbon and the interior's lightweight design excludes an infotainment system (available as a no-cost option), carpets and certain noise insulation parts.

Gas mileage, as you might expect, isn’t phenomenal—but then this is a $400,000 supercar, so you shouldn’t really be pinching pennies at the pump. At 11 mpg city, 18 highway, 13 combined for the coupe (or 10/17/12 mpg for the roadster), the Aventador is rather un-green—even by supercar standards, however.

Like any good supercar, and any modern Lamborghini, the Aventador is nearly endlessly customizable, thanks to the company’s Ad Personam program. Every shade and hue under the sun, nearly any material of upholstery, and most of the features or technologies you could want can be yours—for a price. But you’re buying a headline-making, neck-snapping supercar, so why skimp? Build your dream.

1 Review
5 star
100%
4 star
3 star
2 star
1 star
Rate and Review your car for The Car Connection! Tell us your own ratings for a vehicle you own. Rate your car on Performance, Safety, Features and more.
Write a Review
2016 Lamborghini Aventador 2-Door Convertible LP 750-4 Superveloce

Helping matters is the claimed weight loss of 110 pounds. That comes courtesy of composite rear fenders and rocker panels, as well as a manually adjustable carbon-fiber wing and fixed C-pillar aero scoops in place of the electronically actuated wing and scoops on the standard Aventador. There’s also much less sound insulation and carpeting (leaving the sexy carbon-fiber structure largely exposed), plus thinly padded fixed-back carbon-fiber racing seats. Other consequential changes include the fitment of lightweight (and gorgeous) new wheels, lateral strut-type magnetic shocks (a production-car first, says Lamborghini), and variable-ratio steering that reduces lock-to-lock motion, particularly with the drive systems in the most aggressive mode, Corsa. + More »
people found this helpful.
Was this review helpful to you? Yes
USED PRICE RANGE
$329,900 - $369,900
Browse Used Listings
in your area
8.8
Overall
Expert Rating
Rating breakdown on a scale of 1 to 10?
Compare the 2016 Lamborghini Aventador against the competition
Compare All Cars
Looking for a different year of the Lamborghini Aventador?
Read reviews & get prices
Related Used Listings
Browse used listings in your area
See More Used