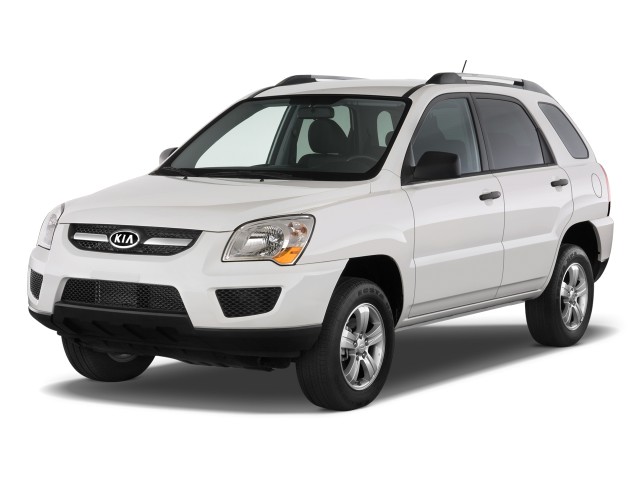 This year's styling refresh for the Sportage not quite enough? It's due for a complete redesign, likely next year.

If you can live without top-level refinement and the latest technology, 2009 Kia Sportage is a fine little SUV and, considering its price, a genuine value.

The Kia Sportage was introduced in 2005, and it sees some slight styling changes for '09, plus improved fuel economy, better drivability, and a sprinkling of internal technological niceties.

To enhance fuel economy, boost performance, and reduce emissions at low- and mid-range rpm, the 2009 Kia Sportage with the 2.0-liter, 16-valve four-cylinder engine uses continuously variable valve timing (CVVT). The 2.0-liter engine produces 140 horsepower, while the 2.7-liter V-6 produces 173 horses. Both engines can be mated to a five-speed manual or four-speed automatic gearbox. EPA fuel economy estimates range from the base four-cylinder/five-speed manual (the most efficient combination) at 20 mpg city, 25 mpg highway, to the least efficient V-6 and automatic rated at 17 mpg city, 21 highway.

Kia's V-6 isn't blazingly powerful, so it's not quite the advantage one might initially consider it to be. Acceleration is a little bit better with the V-6 than the four-cylinder, but neither is a Corvette killer. However, the V-6 engine comes in at a price point that competes with most competitors' four-cylinder engines, so the Kia has a lead on paper right from the start.

The 2009 Kia Sportage is built off of the Kia Spectra car chassis, and this is good because it gives the little SUV a smooth ride and comfortable handing dynamics. The Sportage rides on MacPherson struts up front, with gas-filled shock absorbers at the rear, stabilizer bars at both ends, and 16-inch wheels and tires. Handling is secure and adequate, but not inspiring.

Performance in government crash tests is middle of the pack, with "acceptable" side-impact results from the IIHS. The 2009 Kia Sportage's long list of standard safety gear includes dual front, side, and curtain airbags; anti-lock brakes; traction and stability control; and tire pressure monitors.

Kia provides excellent coverage on the 2009 Sportage with a five-year/50,000-mile basic warranty, plus a ten-year/100,000-mile warranty on the powertrain.

TheCarConnection.com notes few complaints about the 2009 Kia Sportage's looks, though critical reaction is not overwhelmingly positive either.

The Sportage’s makeover includes body color-matching front and rear bumpers, a new grille design, new headlights and fog lights, and new alloy wheels. According to Kelley Blue Book, Kia 2009's "distinctive design is modern, clean and attractive...a curvaceous, almost organic look, with a get-up-and-go attitude." The reviewer at The Auto Channel reports being "pleasantly impressed with Kia Sportage as far as looks...are concerned." Details that detract from the appearance are black bumpers on some models and a nose that seems too small for the rest of the vehicle. Cars.com notes Kia Sportage "styling echoes the larger Sorento's, and flared wheel arches help establish what Kia calls a 'strong visual presence.'"

The 2009 Kia Sportage features a redesigned center fascia inside, but more important, all Kia Sportage models come standard with Sirius Satellite Radio and auxiliary and USB jacks with MP3 playback capabilities. Kelley Blue Book reports that "improved plastics and upholstery throughout the 2009 Kia Sportage lineup...attractive cloth upholstery gives an impression of comfort and durability...adding to the upscale appeal are aluminized accents on both the instrument and door panels." Referring to this Kia 2009 interior, The Auto Channel observes that the 2009 Kia Sportage "looks and feels a lot classier than you think it would," and while it "certainly isn't going to dazzle you with dual temperature controls, power seating or a Bose stereo, the center console and dashboard are still modern and sleek in design with basic features." Edmunds calls the interior “stylish and functional” and “attractive.”

The 2009 Kia Sportage performs like a frugal small car, from its acceleration to its handling, even with available all-wheel drive.

The 2009 Kia Sportage is a fine, light-duty commuter vehicle, but little more.

Kelley Blue Book is "not overly impressed by the responsiveness of the Kia 2009 V6; it will meet consumer expectations, but we don't believe it will exceed them." They advise that the "four-cylinder should be reserved for light duty only—no full loads, light towing and little exposure to work at high altitudes." Cars.com reports that the "Kia Sportage 2.0-liter four-cylinder produces 140 horsepower, while the 2.7-liter V-6 generates 173 hp and 178 pounds-feet of torque." According to ConsumerGuide, "2009 Kia Sportage four-cylinder models are fine for light-duty commuting but lack enough power for confident highway merging and passing." They "recommend a V6 model, though they're no fireballs."

ConsumerGuide says "the automatic transmission is responsive enough with either engine, though not even the V6 has abundant passing punch." All-wheel drive is an option. Cars.com reports that "a five-speed manual gearbox is standard in the four-cylinder Kia Sportage LX, and a four-speed automatic is available," while "all V-6 models come with the automatic...automatic-transmission responses are prompt, but downshifting can be sluggish when passing."

ConsumerGuide says the 2009 Kia Sportage is "among the better-riding compact SUVs." Off-road ability draws some mixed comments, however; while Kelley Blue Book acknowledges a "smooth ride, improved handling," it notes that "the trade-off is an inability to tackle the harshest sorts of off-road terrain." Jalopnik, on the other hand, points out "off-road-worthy fish-vertebrae underpinnings...tougher than most." "On rougher pavement, the ride is well-cushioned...suspension reactions are seldom excessive, and recovery is prompt," reports Cars.com. This source adds, "maneuvering smartly and steering with a somewhat light touch, the 2009 Kia Sportage feels satisfyingly secure on rain-soaked pavement. On expressways, however, it takes some concentration to stay centered in your lane."

The 2009 Kia Sportage has adequate room, reinforced by higher-quality construction than you might expect for the price.

An upgraded interior helps the smallish 2009 Kia Sportage compete with a higher class of vehicles.

According to ConsumerGuide, "legroom is adequate, and headroom is generous...both the leather and the cloth seats are comfortable, with good side-bolster support.” Cars.com reports that "the Kia Sportage seats up to five." Kelley Blue Book notes that "Kia Sportage seating position is appropriately upright and, while the standard sunroof encroaches slightly on rear-seat headroom, most adults will find either front or rear seating to be generous," adding that "the fifth passenger's area, in the center of the rear seat, is somewhat marginal."

ConsumerGuide notes that "groceries fit fine behind the rear seats, but there's little room for large objects," and "the Kia Sportage rear seats fold easily in one motion to form a flat load floor." Cars.com reports that "with the 'Drop and Fold' rear seating system, the seat cushion lowers and the backrest folds flat, yielding 66.6 cubic feet of cargo space."

Kelley Blue Book praises the "quality plastics, with an almost quantum improvement in both appearance and texture." ConsumerGuide reports "dashboard control dials have rubber grips, literally a nice touch," going on to note "for interior materials, [Kia] Sportage is a cut above Honda CR-V and is slightly upscale of Tucson." Materials are above average for the price and class.

ConsumerGuide says the "4-cylinder engine is coarse and buzzy...the V6 is quiet at cruise, but it strains loudly at higher rpm." Cars.com reports "other than a little tire noise on some surfaces, the Sportage is quiet, though the engine gets snarly at high rpm."

The 2009 Kia Sportage doesn't score with the best for occupant protection, even though it has the feature set.

Safety and security while riding in the 2009 Kia Sportage are at the middle of the pack.

The Insurance Institute for Highway Safety (IIHS) gives the Sportage “acceptable” ratings for front and side impacts. The National Highway Traffic Safety Administration (NHTSA) awards the Sportage five out of five stars for front and side impact protection. In terms of rollover resistance, the 4WD version of the 2009 Kia Sportage scores a respectable four stars, but the 2WD version scores only three stars.

"All-disc antilock brakes, traction control and an electronic stability system are standard," as are "six airbags, including side curtain airbags,” reports Cars.com.

There's a bit of a rearward visibility issue, according to some reviews. ConsumerGuide comments, "Kia 2009 rear-roof styling impedes vision to right-rear and dead astern."

Used Kia Sportage for sale near

The 2009 Kia Sportage is very well equipped, even in base form, and now offers more of the latest entertainment and high-tech features.

The 2009 Kia Sportage has the basics covered, and for 2009 the Kia made standard features out of Sirius Satellite Radio and auxiliary and USB jacks with MP3 playback capabilities.

"Sunroof, power windows, heated outside mirrors, trip computer, roof rack and keyless entry do not come as an extra cost or better known as an upgrade package, which is nice,” remarks The Auto Channel.

Regarding packages, Kelley Blue Book says, "on the EX, a Luxury Package includes leather seats and trim, heated front seats, automatic headlamps and a six-disc CD changer, amplifier and subwoofer." When it comes to options, Kelley Blue Book reports, "with all that is standard the customer is left with little to add...the less-expensive 2009 Kia Sportage LX gives the customer more variables, although many of those would be dealer-installed."

2 Reviews
5 star
4 star
100%
3 star
2 star
1 star
Rate and Review your car for The Car Connection! Tell us your own ratings for a vehicle you own. Rate your car on Performance, Safety, Features and more.
Write a Review
For 2009 Kia Sportage