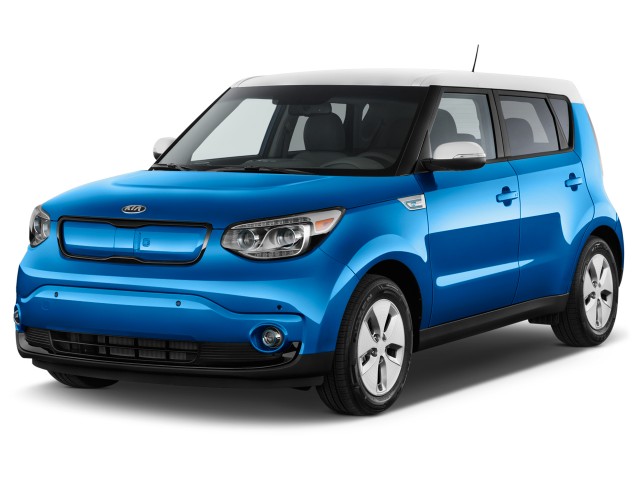 If you live in a colder part of the few regions where the 2017 Kia Soul EV is on sale, consider the middle or highest trim levels, both of which include a heat pump that saves energy and extends range compared to the base car's resistance heater.

The 2017 Kia Soul EV offers more space for people and cargo than many other small battery-electric cars, but you can only buy it in limited regions and it's no longer top of the non-Tesla range list.

The 2017 Kia Soul EV is a low-volume electric car adapted from the very popular Soul compact tall wagon. The current Soul was redesigned for 2014, and the electric version, now in its third year, followed for 2015. The electric Kia's three trim levels are the base Soul EV-e, the mid-range Soul EV, and the top-of-the-line Soul EV+ (plus).

The Soul may be technically a five-door hatchback, but the latest design is more comfortable, with a better ride and improved handling than its predecessor. Its space-efficient design is hard to beat for maximizing interior room to hold people and their goods in a small footprint. It's a similar formula to the one adopted by the new Chevrolet Bolt EV, also a tall hatchback.

While the Soul EV no longer has a slight range advantage over competing small electric cars, it's still the best of the 70- to 100-mile group in some ways. It's roomier inside, and last year Kia added additional trim levels and new features. Overall, we give the Kia Soul EV a rating of 7.2 out of 10, higher than several of its competitors. (Read more about how we rate cars this year.)

The design of the electric Soul keeps the same boxy profile of the basic model to maximize interior room. The blunt front end of the Soul EV replaces the conventional car's grille with a blanking panel that includes the door for the charge port. The roof seems to float over the windows, tall LED taillights dominate the back end, and LED bug-eye headlights are stuffed in the front end.

The heart of the Soul EV, of course, is the electric motor that powers its front wheels, drawing current from a flat air-cooled lithium-ion battery pack in the floor. The 27 kilowatt-hour energy capacity is about 10 percent higher than the rest of the affordable pre-2016 electric cars, and it gives the Soul EV a combined EPA range rating of 93 miles—higher than the high-volume Leaf's 84 miles without last year's battery upgrade—and an energy efficiency of 105 MPGe. (Miles Per Gallon Equivalent, or MPGe, is a measure of how far a car can travel electrically on the amount of energy contained in 1 gallon of gasoline.)

The motor of the electric Soul is rated at a maximum output of 81 kilowatts (109 horsepower), which gives it relatively quick acceleration away from rest and acceptable passing power on the highway. Like most electric cars, the lack of an engine makes the Soul EV much smoother and quieter than the gasoline version. Although highway range is rated at just 92 miles—the city rating is 120 miles—we got more than 100 miles of range in several mixed-use test drives, albeit mostly in temperate weather. Aggressive regeneration permits some "one-pedal" driving using the accelerator alone, without need for separate braking, under some circumstances.

For a tall car, the Soul EV corners decently, helped by the weight of its battery about as low in the car as you can go. The suspension is tuned for a smooth, comfortable ride, but it stays taut enough to lend a feeling of security. The electric power steering system offers only limited feedback, typical of most Kia vehicles, and three levels of steering weight—comfort, normal, and sport—add little to the driving experience.

Kia has added some high-gloss plastics to the funky design of the standard Soul's interior. The front seats are comfortable, with dual-density foam and lower seat cushions long enough to support even taller drivers. Its height and upright stance make it exceptionally easy to get in and out of. It remains a small car, though, meaning its width is limited—so while there’s plenty of head room and leg room, three adults won't fit in back happily, if at all.

The 2017 Kia Soul EV hasn't been separately rated by either the NHTSA or the IIHS due to its low volumes, and that's not likely to change. The gasoline version gets a five-star overall rating from the NHTSA, which gives it five stars in each category save for rollover resistance, where it scores four stars. The IIHS hasn't yet tested the conventionally powered 2017 Soul. All models include six airbags, with dual front airbags, seat-mounted side bags, and full-length side curtain bags.

Every Soul EV includes a standard CHAdeMO DC fast charge port with a plug lock, as well as a 6.6-kw onboard charger for 240-volt Level 2 charging. Kia says charging times vary from 24 hours at a 120-Volt wall outlet (if the battery is fully depleted) to less than 5 hours when plugged into a 240-volt charging station. The company offers several home charging station options. As for DC fast charging, the battery can be recharged to 80 percent of capacity from empty in as little as 33 minutes at a 50-kw CHAdeMO fast charger.

Last year the electric Soul acquired a third trim level; for 2017, the three flavors are the base Soul EV-e, the mid-range Soul EV, and the top-of-the-line Soul EV+ (plus). Every Soul EV has heated front seats and a heated leather-wrapped steering wheel, minimizing the need for cabin heating to maximize cold-weather range. Other standard features are a 3.5-inch OLED instrument cluster, keyless ignition, a driver-only ventilation function that closes the passenger vents to boost efficiency based on vehicle occupancy, and an illuminated AUX/USB port.

The mid-level Soul EV upgrades to a heat-pump heating and air-conditioning system, which uses less energy and improves real-world range in very hot or very cold weather. It also adds an 8.0-inch capacitive touchscreen with a rearview camera and the UVO infotainment system. Special EV functions include the ability to check state of charge and other vehicle status data remotely, search for charging stations, and precondition the interior temperature while the car remains plugged in.

At the top of the range, the high-end Soul EV+ layers on leather trim on all seats, ventilated front passenger seats, heated rear outboard seats, front and rear Park Assist, and folding power mirrors. The optional "Sun & Fun Package" bundles LED interior lighting and speaker lights that pulse to the beats of the six-speaker audio system with a panoramic sunroof.

Customer interest in the electric Kia Soul was significantly greater than the company anticipated. One executive said Kia had been "kind of shocked" by how well the Soul EV was received. More than 20,000 have been sold globally over two years, though Kia refuses to release U.S. sales numbers, which appear to be low enough to fall into "compliance car" territory.

During 2015, Kia expanded distribution of the Soul EV beyond California. It is now available at selected dealers in Georgia, Hawaii, Oregon, Texas, and Washington, plus four states in the Northeast: Connecticut, Maryland, New Jersey, and New York.

1 Review
5 star
100%
4 star
3 star
2 star
1 star
Rate and Review your car for The Car Connection! Tell us your own ratings for a vehicle you own. Rate your car on Performance, Safety, Features and more.
Write a Review
2017 Kia Soul EV EV Automatic

We own 2 EVs, there is no comparison