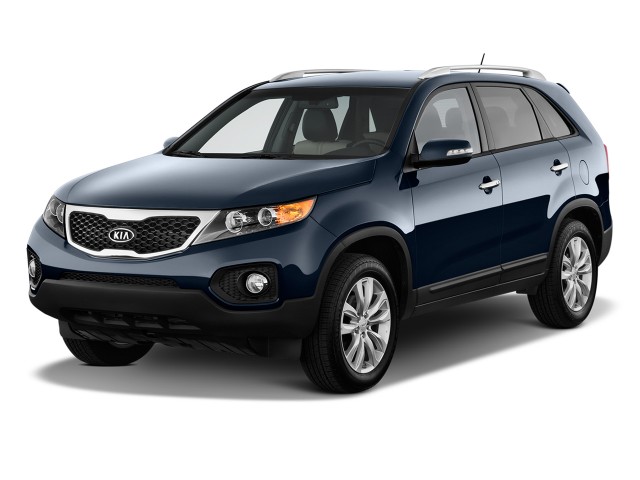 Bargain hunters beware: There’s no such thing as a 2010 Kia Sorento. The automaker’s skipping the model year and putting the 2011 model on sale early in January 2010 for a fresh start.

The 2011 Kia Sorento takes a right turn in its transition from off-roader to all-weather wagon: It’s sized right, timed right, and packaged right.

If you’ve gazed at a CR-V, RAV4, or Edge with lust in your heart, you may want to back away from those flirtations and take a look at the 2011 Kia Sorento.

You probably know the Sorento as a truck-based SUV with frame rails and some real off-road capability—but all that’s changed. The new Sorento leaves the trails behind for a new mission that’s all about toting families in carlike comfort. It’s now built off the same architecture as the Hyundai Santa Fe, which means carlike construction and carlike handling.

Offered in LX, EX, and EX V-6 versions, the 2011 Sorento just might be the perfect vehicle for today’s downsized budgets and value-conscious shoppers. It splits the niche of crossovers in the middle, delivering the space and performance of some bigger names with the fuel economy of some smaller entries, with the addition of a third-row seat, a choice of engines, and a class-leading warranty. Suddenly, the dull-ish Sorento is all things to a much bigger group of potential buyers looking at a Honda, a Toyota, or even a Ford Edge.

We’re giving the 2011 Sorento an overall rating of 8.0 out of 10, with high scores in the safety and features and green categories. It falls a bit behind some compact utes on performance, but the styling is spot-on, and gas mileage is near the top of the class—as are standard features like USB for your music player and satellite radio. Can you rock with that? We think you can.

Kia’s new direction for the Sorento kicks off with attractive styling. The Sorento sits lower now, and it’s taken on some of the cues from Kia’s passenger cars, like the “Schreyer line” named for the chief designer Peter Schreyer and which splits headlamps from its grille. The headlamps and grille form a wide arc across the somewhat high nose and wrap into a fairly deep wedge that defines the sideview. Kia dubs the sideview a “flying wing,” and the vertical pillar at the tailgate does give it an aeronautic look—as well as a passing resemblance to the Acura NSX, if we’re allowed to go there.

The passenger space is defined by a somewhat imposing dash; drivers face three big oval gauges with clearly marked faces, as well as a center stack with a large LCD screen flanked by big vents and footed by three big, round, useful climate-control knobs. It’s a simple, clean look that’s dulled only by some drab, open-grained plastic across the dash and the tops of the doors—and unconvincing fake-wood trim on certain versions.

Universally, Kia’s assembly quality has moved to global standards, and the Georgia-built Sorento is no exception. For its price, the hard plastic on the dash and doors is understandable, and it’s all pieced together with above-average fit and finish.

The 2011 Kia Sorento goes mainstream with its handling; only the very frugal will need the base four-cylinder.

We’ve driven both the four- and six-cylinder 2011 Sorento, and we've sampled Kia’s front- and all-wheel-drive versions. Of all the iterations (save the manual-transmission version, which we still haven’t been able to try), the front-drive V-6 is the clear choice here.

There’s just not much motivation with the 172-horsepower, 2.4-liter four-cylinder--not on price, not on power, and not on fuel economy. The smaller engine certainly sounds eager enough to please, but even the relatively lightweight Sorento saps whatever energy it can muster. With the six-speed automatic, you’re looking at a 0-60 mph run of about 9 seconds, if our god-given seats are calibrated correctly.

The four-cylinder model does slide in under $20,000, but for a few thousand dollars more, Kia will give you a much more muscular 273-hp, 3.5-liter V-6 coupled to the same six-speed automatic transmission, in either front- or all-wheel-drive trim. The big V-6 doesn’t mind snapping to redline to needle the Sorento through traffic, and it has a well-tuned mechanical howl through its powerband. We suspect it drops acceleration times by more than a second, but it doesn’t cost much more to fuel up (read more in our green rating).

The automatic transmission is a Kia design and shifts without drama, but a set of shift paddles would be a welcome addition. There’s a manual-shift mode on the shift lever, but plenty of room for paddles behind the steering wheel. The automatic does have a mind of its own and will shift when it thinks it should—even when in manual mode, when you’re supposed to have total control. That’s typical of SUVs, so maybe it’s forgivable.

The Sorento’s ride quality is a touch more rumbling than you might expect on construction riddled interstates, but you'll mostly notice noise and a light impact feel. It’s more softly sprung than the RAV4 and CR-V, with steering that’s willing but not exceptionally quick, and a whiff of torque steer for front-drive models. It’s the kind of benign handling you look for in family vehicles.

If you think you need it, the optional all-wheel-drive system sends most of the power to the front wheels, but when traction changes, it can send 50 percent of the power to the rear wheels. Drivers can also lock the differential at a 50:50 power split, and Kia includes downhill descent control and hill-hold assists, but no true low range (or any real need) to make this a true off-road vehicle. However, the Sorento can tow 3,500 pounds in some trims. We’re not sold on the need for all-wheel drive for the average commuter living south of the Mason-Dixon line, but again—it’s your money to save.

The 2011 Kia Sorento hits a sweet spot in size, and if you really need two more seats, it has ‘em.

With a body about 3 inches longer than before, the 2011 Kia Sorento totes passengers and their stuff more ably than the outgoing version.

The 2011 Sorento’s overall length of 184.4 inches and its 106.3-inch wheelbase split the crossover category with CR-Vs and Escapes below it and RAV4s and Edges above it in size. It feels larger than many of its competitors; the perception of space inside is better than in, say, the 2010 Chevrolet Equinox. In its class, only the RAV4 also offers a third-row seat, though the smaller Mitsubishi Outlander has a relatively useless third-row bench for the adventurous.

Front to back, the Sorento fits most adults and kids well. The front seats are unexpectedly well bolstered (in leather-trimmed versions, at least) and have lots of headroom and legroom. The second-row seats are usable for six-foot adults, with reclining seatbacks added for long road trips. The third row is for children only, though; the seat cushion sits almost on the floor and headroom is lacking.

For flexibility’s sake, the third-row seat folds flat to reveal a cargo area with a decently low load floor, and the second-row seats fold forward to expose a total of 72.5 cubic feet of hauling room. With the third-row seat in place, cargo room drops to a measly 9.1 cubic feet, and the seatback itself sits close to the rear hatch glass.

The 2011 Kia Sorento is moving in the right direction with better safety performance.

Safety is a major initiative at Kia. All its new vehicles come with airbags and stability control, and they're engineered with five-star safety in mind.

That planning shows in some safety tests already. NHTSA (National Highway Traffic Safety Administration) hasn’t yet tested the Sorento, but the Insurance Institute for Highway Safety has–and it calls the Sorento a Top Safety Pick.

Kia does fit the 2011 Sorento with standard side and three-row curtain airbags, stability control, and anti-lock brakes. Visibility is fine, and Kia makes a rearview camera available on high-end versions.

Used Kia Sorento for sale near

The 2011 Kia Sorento nails the basics with standard features like USB ports and Bluetooth, and it factors in upscale options like leather and rear-seat DVD players.

Kia fits some useful features to every 2011 Sorento and adds some family-friendly options to the order sheet.

Options include an Infinity audio system; a navigation system with a rearview camera; leather seating; roof rails; a panoramic sunroof; and a DVD entertainment system. We like Kia’s audio systems for their amply good sound quality, but the buttons don’t always do what you’d expect. Sometimes you have to push and twist one more way before the Sorento sound system obeys; another round of development would make the user interface Apple-worthy.

One last note: With the plethora of phone-driven navigation systems, we’re not sure we’d opt for a built-in GPS for the high price tag you’d pay even in the value-driven Sorento.

Be the first one to write a review on 2011 Kia Sorento
Rate and Review your car for The Car Connection! Tell us your own ratings for a vehicle you own. Rate your car on Performance, Safety, Features and more.
Write a Review
USED PRICE RANGE
$5,681 - $19,998
Browse Used Listings
in your area
8.0
Overall
Expert Rating
Rating breakdown on a scale of 1 to 10?
Compare the 2011 Kia Sorento against the competition
Compare All Cars
Looking for a different year of the Kia Sorento?
Read reviews & get prices
Related Used Listings
Browse used listings in your area
See More Used
The Car Connection Daily Headlines