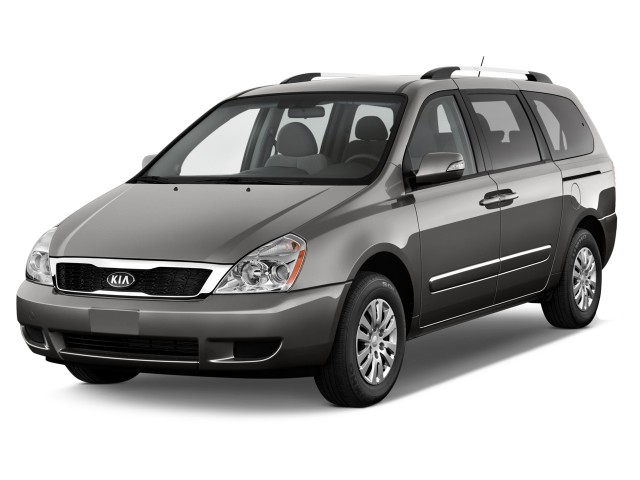 Like Kia products but put off by the Sedona's dated look? An all-new Sedona is still on the way for the 2015 model year.

The 2014 Kia Sedona is a spacious, comfortable family van, but it lacks the modern design flair and high-value presentation that marks the rest of the brand's lineup.

An all-new 2015 Kia Sedona is due to arrive very soon; yet while we wait for that modern reboot, we have the 'classic' Sedona around for one more model year. Short of top-notch, the 2014 Kia Sedona is essentially the same second-generation van that we've seen since the 2006 model year, packing a few recent updates.

Compared to the 2012 Sedona, the 2014 model gets a new grille, as well as new lighting, including standard fog lamps on both trims. New 17-inch multi-spoke alloy wheels are optional on the LX but standard on the EX. That said, the look is going to be familiar, and not all that much different inside or out compared to used Sedonas—which leaves it as a plain-Jane outlier in a Kia lineup that's otherwise been completely, fashionably redesigned in recent years.

The powertrain is also mostly carry-over, with a 269-horsepower, 3.5-liter V-6 and six-speed automatic transmission sending power to the front wheels and offering relatively smooth, strong acceleration and good responsiveness. Both versions now include Sportmatic manual control. A hydraulic power-assist steering system, multi-link rear suspension, and four-wheel disc brakes all add up to what we've noted in past model years is a pretty comfortable ride but handling that's uninspired compared to segment leaders like the Honda Odyssey. Fuel economy, however, remains about par for such a spacious, three-row vehicle, at 17 mpg city, 24 highway.

Interior appointments were significantly improved for the 2011 model year, when the Sedona got a modest mid-cycle refresh, and there have been further cabin improvements this year. The 2014 Sedona gets a storage console good for iPads or other tablets. Otherwise the seating arrangement carries through; in past model years we've found that it isn't nearly as good as Chrysler's Swivel n' Go setup or Honda's convenient new dual-purpose configuration in the Odyssey. Think movable, but not removable; so if you expect to haul for weekend projects on the weekends and pinch-hit for soccer-team transit on weeknights, there are better options.

The 2014 Sedona includes six standard airbags, four-channel anti-lock brakes, and electronic stability control. A backup warning system is also included on all 2014 Sedonas, too. But what's still to be proven is whether or not the Sedona's structure has been reinforced for better crash-test performance; the 2012 Sedona earned a 'poor' score from the Insurance Institute for Highway Safety (IIHS) in their roof strength test. On the other hand, in a recent federal test, the Sedona earned an excellent five stars.

The 2014 Sedona is a Plain Jane outlier in an otherwise stylish Kia lineup.

What can we say here? The 2014 Kia Sedona is a van, and not a particularly charismatic or stylish looking one--although a few minor improvements give it a few details to speak of.

Yet it looks like the Sedona got left behind. While Kia has made its cars and crossovers more desirable with clean Euro-chic proportions and details, the Sedona is quite plain, a vestige of a former era. The 2014 Kia Sorento is essentially a continuation of the 2006-2012 model. It's seen a few modest updates over the years, including a new grille and headlamps for 2011.

Compared to the 2012 Sedona, the 2014 model does however get a new grille, as well as new lighting, including standard fog lamps on both trims. New 17-inch multi-spoke alloy wheels are optional on the LX but standard on the EX. That said, the look is going to be familiar, and not all that much different inside or out compared to used Sedonas.

Powertrain performance for the Sedona is strong, but it's not a particularly athletic handler.

The 2014 Kia Sedona has a powertrain performance that's plenty quick, as well as handling that's just engaging enough for what most people will expect in a minivan. It's not as athletic and nimble-feeling as the Honda Accord, but certainly not short on responsiveness.

A 269-horsepower, 3.5-liter V-6 and six-speed automatic transmission sends power to the front wheels and offers relatively smooth, strong acceleration--although as with the rest of the Kia lineup, the accelerator can be a little touchy.

Both versions now include Sportmatic manual control. A hydraulic power-assist steering system, multi-link rear suspension, and four-wheel disc brakes all add up to what we've noted in past model years is a pretty comfortable ride but handling that's safe but uninspired.

There's no clever seat-folding arrangement here, although the Sedona hits all the marks for family comfort.

The 2014 Kia Sedona has plenty of interior room, and an interior that's spacious enough for seven; but it's not quite as delightful if you need to switch back and forth between carrying kids and other cargo.

There's nothing quite like Chrysler's trick Swivel n' Go seats (in the Dodge Grand Caravan and Chrysler Town and Country) or Honda's so-called Magic Seat (from the Odyssey) on the Sedona, but the third row is relatively easy to fold down and expand cargo. First- and second-row seats are quite comfortable, but as with most three-row vehicles the back row is tough to get to and will leave adults in a knees-up seated position.

Otherwise, the Sedona is simple and straightforward inside. It's been spruced up with a couple of updates over the years, yet relative to other models in its class the interior is a bit short on detailing.That said, there are plenty of functional, thoughtful details, like a dual-compartment glovebox, a very large center console, and eight cup holders in all.

We've found ride quality to be on of the strengths of the Sedona against its rivals; although there can be a bit of road noise on some surfaces, its highway ride especially is nicely controlled.

The 2014 Kia Sedona has all the safety basics expected in a minivan--but its older structure might put it a step behind in crash tests.

The 2014 Kia Sedona has crash-test performance that's a mixed bag—acing some tests and flunking others.

The aged structure that the Sedona carries forward with, for another year, shouldn't add up to any meaningful change versus a few model years ago.

That said, the Sedona gets a pretty good set of rationgs—with a few exceptions. The Insurance Institute for Highway Safety (IIHS) gives the Sedona top 'good' ratings for frontal, side, and rear impact, although the Sedona gets just 'poor' ratings in the roof strength category, corresponding to protection in a rollover. The IIHS hasn't yet tested the Sedona in its tougher new small overlap frontal test. Otherwise, the federal government recently retested the Sedona, and it still stands up well, with five-star ratings across the board.

Safety equipment is good, with standard items including anti-lock brakes; stability and traction control; and front, side, and side curtain airbags (that cover all three rows of seats). A backup warning system is also a standard feature in the base LX. Outward visibility isn't great compared to other vans, but it's better than most taller crossovers.

Used Kia Sedona for sale near

The Sedona is well-equipped, albeit not the shockingly strong value that other Kia models present.

The 2014 Kia Sedona starts at $26,750, including destination, while the Sedona EX starts at $31,750. That's far above the budget-price and fleet-oriented Dodge Caravan SE, yet in the vicinity, in pricing and equipment, of the Dodge Caravan SXT, Toyota Sienna L, and Nissan Quest S.

Step up to the EX model, and you add alloy wheels plus leather upholstery, a heated power driver's seat (six-way for the driver, four-way for the passenger), an auto-dimming rearview mirror, a HomeLink universal garage-door opener, power rear-quarter glass, a trip computer, and a roof rack, plus an eight-speaker audio system.

The Sedona is about par in fuel economy, and reasonably good on the highway for such a large, roomy vehicle.

The 2014 Kia Sedona is offered only in one powertrain combination--with front-wheel drive and a six-speed automatic--and it earns EPA ratings of 17 mpg city, 24 highway. Those are about par among the larger minivans its size, but far from class-leading.

The top nod in this class goes to the Honda Odyssey, which earns up to 19 mpg city, 28 highway for models with the six-speed automatic. And four-cylinder Toyota Sienna models earn 19 mpg city, 24 highway.

1 Review
5 star
100%
4 star
3 star
2 star
1 star
Rate and Review your car for The Car Connection! Tell us your own ratings for a vehicle you own. Rate your car on Performance, Safety, Features and more.
Write a Review
2014 Kia Sedona 4-Door Wagon EX

It's as Good as a Honda-ask Motor Trend Magazine