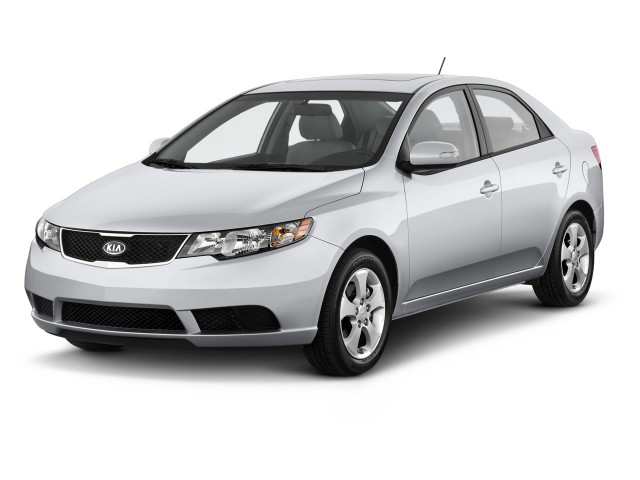 If you're assuming that the Kia Forte is closely related to the latest Hyundai Elantra, take a closer look. The Elantra's from a newer architecture, and its safety scores are better across the board.

It's a family affair: the Kia Forte lineup is more comfortable, more eager, and better finished than ever, and a step up from what its sticker price might suggest.

Fitting fashionably in between the subcompact Rio and mid-size Optima, the 2013 Kia Forte covers all the bases with three different body styles of compact cars—including a Forte sedan, Forte 5-door hatchback, and Forte Koup two-door.

The Forte was the first car to get the crisp new Euro-influenced look that has characterized all of Kia's latest cars—and it rightfully earned the Forte a new name, replacing the good but anonymous Spectra just three years ago. The Forte is smooth, clean, and uncluttered on the outside, with proportions that feel just right either up close or from a distance, an assertive stance, and a flowing, gently arced roofline. There simply aren't any awkward angles, and the sleek Koup (coupe) looks even better with its simple, swept-back appearance. You also have a five-door 'Forte 5-door' hatchback from which to choose, and we tend to think that model looks even better despite the truncated roofline. On the inside, the Forte is simple and no-nonsense, with a look that's not trend-setting in any way yet still impresses as stylish.

There's a choice between two powerplants with the 2013 Forte family, as in the years prior. In any body style, the Forte LX and EX are powered by a 2.0-liter four-cylinder making 156 horsepower. On SX models, the four-cylinder is upgraded to 2.4 liters, and power rises to 173 hp. All LX cars have a six-speed manual transmission standard, while other trims get a smooth-shifting six-speed automatic as standard equipment. Performance is straightforward, value-conscious, and perfectly adequate--there's nothing exotic about it, but it won't leave many commuters or daily drivers regretting a lack of power. We recommend the automatic with the Forte, as it works well with the engine, and the manual is a bit balky. Suspension tuning is firm but absorbent, and the hydraulic power steering responds well. Meanwhile, gas mileage is average for the class, at up to 26 mpg city, 36 highway.

With a rather tall roof and high seating position, you get a reasonably good view outward from the front seats, and the cabin feels airy. Front seats are a bit short and flat, but there's lots of legroom, and the backseat has plenty of (legroom-limited) space for two adults, three in a pinch. Interior appointments are unremarkable, but they stand as better than what we've seen in the latest Honda Civic, while Kia has done a great job sealing out road noise.

The Forte sedan remains an IIHS Top Safety pick, and it's performance in federal tests is a sound four stars, with some caveats, which we'll explain in more detail. Otherwise, the standard safety-features roster includes dual seat-mounted side airbags, full-length side curtain airbags, front active headrests, anti-lock brakes with brake assist, and electronic stability control. The Forte lacks advanced safety options, such as blind-spot monitors, now appearing on its competitors.

If you go with one of the more affordable models, you won't miss out on much--except for maybe telescopic steering adjustment, which comes only on EX models and above. Air conditioning remains optional on the base Forte LX, but all Forte trims get Bluetooth, Sirius Satellite Radio, and an auxiliary input jack for the audio system, plus steering wheel controls and voice activation. The EX model adds A/C and power accessories—and larger 16-inch alloys, for Koup models—while the SX adds fog lamps, plus upgraded upholstery and trim. A Technology Package brings navigation, Sirius XMTraffic, automatic climate control, and push-button start, plus other upgrades.

The 2013 Kia Forte is straightforward and good-looking, but inside especially it's more plain than charming.

The Forte was the first car to get the crisp new Euro-influenced look that has characterized all of Kia's latest cars—and it rightfully earned the Forte a new name, replacing the good but anonymous Spectra just three years ago. Even after much of the compact segment has been redesigned—Ford Focus, Chevrolet Cruze, Honda Civic, and even its distant cousin, the Hyundai Sonata—the Forte somehow remains competitive.

On the outside, the look is smooth, clean, and uncluttered, with proportions that feel just right either up close or from a distance. Add to that an assertive stance, and a flowing, gently arced roofline. There simply aren't any awkward angles, and the sleek Koup (coupe) looks even better with its simple, swept-back appearance. You also have a five-door 'Forte 5-door' hatchback from which to choose, and we tend to think that model looks even better despite the truncated roofline.

Review continues below
Inside, the Forte is simple and no-nonsense, with a look that's stylish but not all that trend-setting. Compared to both the instrument panel of the larger Optima and smaller Rio, that of the Forte (which came earlier in the development of Kia's new style) is smoother, more organic—with more in common with the Soul and its distinctive and functional teardrop center stack.
7

Compared to most other value-oriented small sedans, the 2013 Forte delivers a little more driving enjoyment.

Even though many of the entries in the compact-sedan class have been redesigned or refreshed just over the past year or so, the 2013 Kia Forte remains one of the better picks in this class from a performance standpoint. The Forte—whether looking at the sedan, 5-door, or Koup—remains near the front of the pack in acceleration, provided you're comparing it with comparably priced bargain and mid-range models. There's no model in the lineup that quite matches up with the likes of the Honda Civic Si, Nissan Sentra SE-R Spec V, or Volkswagen GTI, however.

Most of the 2013 Forte models (LX and EX models) get a 156-horsepower, 2.0-liter four-cylinder; sportier SX models, on the other hand, get a 173-hp, 2.4-liter four. Across the entire line, a six-speed manual gearbox is standard while a six-speed automatic transmission is available. Both engines deliver more than adequate acceleration, and these are both flexible engines that produce plenty of power in the middle of the rev range, so they work well with an automatic transmission. We've wished for better clutch-and-throttle coordination in manual-transmission cars, so the automatic is probably the best pick for all but those who really must shift for themselves. Gas mileage is about the same between transmissions, at up to 26 mpg city, 36 highway with the smaller engine.

There's also a lot to like about the way that the Forte is tuned—overall, a good compromise between ride quality and crisp body control. SX models tend to offer more handling ability while sacrificing ride comfort somewhat, although LX and EX models feel sportier in quick maneuvers than many other compact models. The hydraulic steering system that comes in most Forte models is somewhat stiff at lower speeds and lightens up at higher speeds, counterintuitively, and the electric power steering that's included as part of the Eco package is precise and well-weighted.

Spacious and roomy, the Kia Forte has some interior appointments that aren't as satisfying as its latest efforts.

A number of other compact-sedan rivals have been creeping up in size, which leaves the 2013 Kia Forte as one of the more manageably sized models. An interior that makes good use of available space, pleasant seating, and a back seat that's just large enough for two adults altogether makes the Forte the right pick for those who want a comfortable yet simple small-car experience.

Aiding that feeling of spaciousness inside the Forte sedan is a rather tall roofline; that enables a pretty high seating position, with a reasonably good view outward, and the feeling of a lower beltline compared to some other models in this class. The down side is that actual seat comfort isn't so impressive; taller or wider drivers will be disappointed with the short, flat front seats, while the rear bench is contoured to fit two adults pretty well, but not for any measure of long-distance comfort. There's just not enough shoulder room to fit three across in back, unless they're smaller kids.

Otherwise, Kia has done a great job in making this interior feel refined, even though you'll never mistake it for a premium or luxury cabin. There are a few more hard surfaces than we'd like to see, but it all fits together better—and more attractively—than in the Civic, for example. And Kia has done a great job in keeping road noise out of the cabin, even though a boomy engine note is obtrusive at higher revs.

The 2013 Kia Forte offers a relatively strong set of safety features, along with decent occupant protection—although results from the two U.S. crash-test organizations have been quite different.

The federal government has awarded the Forte four stars overall, including four stars for frontal and side-impact protection, but it got a more worrisome three-star rating with a male (adult) sized crash dummy in the side test, and only a two-star rating in the new side pole test. On the other hand, the IIHS has given the Kia Forte top 'good' ratings in frontal offset, side impact, and rood strength, along with rear impact; it also earned the IIHS Top Safety Pick designation. Keep in mind that the IIHS notes that these scores extend only to the four-door Forte Sedan models.

Used Kia Forte for sale near

The 2013 Kia Forte lineup, in general, includes a few more features than rival models at about the same price. The only exception at the base level is that telescopic steering adjustment still isn't included in all models; you need to step up from the base LX to the EX for that.

The SX models step up the performance flavor with a sport-tuned suspension, larger brakes, and showy 17-inch alloy wheels.

A Technology Package brings navigation, Sirius XMTraffic, automatic climate control, and push-button start, plus other upgrades. Other options are limited mostly to a power sunroof, leather seat packages (heated in front), and a Convenience Package that adds A/C and other upgrades to the LX.

Forte Koup models are spiced up just a bit in features and appearance versus Sedans of the same level; for instance, Koup EX models include 16-inch alloys, instead of the 15-inch steel wheels of their Forte EX sedan counterparts.

A number of compact sedans that have been recently redesigned now boast EPA highway fuel economy ratings of around 40 mpg—or even better. The 2013 Kia Forte isn't quite this frugal; it comes with EPA ratings that, today, are considered about average for the class, even though just two years ago they would have been among the best.

The sporty SX model is the laggard of the group, with EPA ratings of 23 mpg city, 32 highway. On the other hand, get the Eco package, which includes electric power steering, low-rolling-resistance tires, and aerodynamic enhancements and you'll get a 27 mpg city, 37 highway EPA rating with the six-speed automatic.

Be the first one to write a review on 2013 Kia Forte
Rate and Review your car for The Car Connection! Tell us your own ratings for a vehicle you own. Rate your car on Performance, Safety, Features and more.
Write a Review
USED PRICE RANGE
$4,998 - $10,998
Browse Used Listings
in your area
7.4
Overall
Expert Rating
Rating breakdown on a scale of 1 to 10?
Compare the 2013 Kia Forte against the competition
Compare All Cars
Looking for a different year of the Kia Forte?
Read reviews & get prices
Related Used Listings
Browse used listings in your area
See More Used