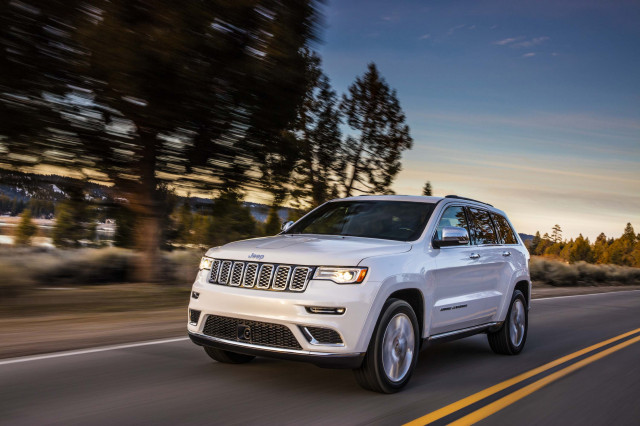 Now that active safety technology is available on the base Laredo, it’s easier to get more Jeep Grand Cherokee for much less money.

The 2020 Jeep Grand Cherokee impresses with style and performance, but lags behind in safety and fuel economy.

The 2020 Jeep Grand Cherokee marks the breakover point between “crossover” and “SUV.” It’s a docile wagon on the street, a mud-plugger when the road disappears, and in some forms it’s a demon on a track.

We give it 6.5 out of 10 overall, heavily weighted toward its comfort and performance; the Grand Cherokee’s fuel economy and safety leave a lot to be desired. (Read more about how we rate cars.)

This year, the Grand Cherokee gets a slew of updates to keep it fresh, from new options on the supercharged, 700-horsepower Trackhawk model to active safety features available on the base Laredo.

Incredibly, the Grand Cherokee has been around since 2011 with only marginal changes to the exterior, and it still looks fresh. Its wagon-esque body wears SUV hallmarks well, from the seven-slot grille back to an upright roof pillar. The interior hasn’t aged as well but is plenty comfortable and offers user-friendly tech with the right options.

The highlight of the Grand Cherokee experience is performance, whether from the base 295-horsepower V-6 that provides plenty of usable power, to the trio of V-8s available, ranging from workhorse 5.7-liter to insane 6.2-liter with a supercharger and 707 hp. The latter is pulled straight from the Dodge Charger and Challenger SRT Hellcat models, and make for hilarious fun in a tall, four-wheel-drive SUV. Rear-wheel drive is standard and all-wheel-drive is available across the range (standard on V-8 models), while a jacked-up Trailhawk model offers more off-road capability than the average SUV.

With seven trims, multiple special editions and appearance and option packages, and four engine choices, the Grand Cherokee offers plenty of variety, and it’s as practical as any five-seat mid-size SUV on the market, though some competitors offer more passenger and cargo space. Comfort is supreme, however, with big, cushy seats in both the front and rear that are improved on higher trims with fine leather.

The base Grand Cherokee Laredo has 17-inch wheels, USB charging ports, infotainment with Apple CarPlay and Android Auto, parking sensors and blind-spot monitors; with newly available active safety tech for 2020, it’s a better deal than ever. It’s possible to spend over $100,000 on a fully loaded Trackhawk however, which frankly is ridiculous, no matter how much horsepower it has.

Safety and fuel economy are where the Grand Cherokee fall drastically short, with only a four-star overall safety rating from the NHTSA for rear-wheel-drive models, and a maximum combined fuel economy of 24 mpg from the diesel engine, while gas-powered models average 21 mpg or less.

The 2020 Jeep Grand Cherokee is among the best-looking SUVs despite being nearly a decade old. With style, class, and timeless proportions, we give it 8 out of 10.

Jeep blew us away with the Grand Cherokee way back in 2011, and it’s a testament to this SUV’s design that it still looks so good nearly 10 years later. Trapezoidal wheel arches, sleek headlights, subtle chrome or blacked-out trim, and that trademark seven-slot grille check all the right boxes, and the big power SRT and Trackhawk models turn the intensity up with fender flares and big wheels and tires.

The interior hasn’t aged quite as well as the exterior, but it remains high-quality and comfortable, with a good balance of screens and buttons or dials to make functionality easier. Limited, Overland, and Summit models add fine leather, wood, and metal for an upscale feel that lets the Grand Cherokee punch well above its price bracket.

The hallmark of the 2020 Jeep Grand Cherokee is performance, from hilarious supercharged V-8 power to off-road capability

The 2020 Jeep Grand Cherokee offers big performance no matter the model, from a stalwart base V-6 to a hilarious supercharged V-8. We give it 7 out of 10 with a nod to its ride and handling, and to its off-road capability.

The Grand Cherokee offers four engine options—all of which are powerful and capable to various degrees. The base 3.6-liter V-6 is a tried-and-true power plant that makes 295 hp and 260 pound-feet of torque through rear-wheel drive and a smooth 8-speed automatic transmission. All-wheel drive is available on the V-6 and standard on all V-8 powered models.

That’s plenty of power for daily use, but those who need or want more grunt will go for the optional 5.7-liter V-8 with 360 hp and the ability to tow up to 7,200 pounds.

While the garden-variety Grand Cherokees are plenty powerful and capable, the performance-oriented models steal the show. Fiat-Chrysler’s SRT division shoehorned a 6.4-liter V-8 into the SRT model, that pushes out 475 hp and moves the Grand Cherokee to 60 mph in less than five seconds.

As if that wasn’t enough, the Trackhawk model borrows the insane supercharged 6.2-liter V-8 from the Dodge Challenger and Charger SRT Hellcat models for 707 horsepower of fury, making the four-wheel-drive Grand Cherokee capable of 60 mph in just 3.5 seconds and a quarter-mile run of 11.6 seconds. Those numbers make it one of the fastest SUVs in the world, but as fun as it is, a price tag of more than $100,000 fully loaded hardly seems worth it for a Jeep.

We’d be remiss not to mention the capable Trailhawk model, which adds off-road suspension, grippier tires, and an all-wheel-drive system that can send nearly 100-percent of power rearward toward an electronic limited-slip differential. This system is also available on Limited, Overland and Summit models, and it’s plenty capable regardless of trim.

Jeep sells the Grand Cherokee with four different four-wheel-drive systems. The base Quadra-Trac I setup has a 50/50 power split and a locking center differential, but no low-range gearing. Quadra-Trac II comes on upper trims and has a low-speed transfer case and hill-descent control; it can move almost all its power to the rear, and can couple with an electronic rear limited-slip rear differential for even better traction. A terrain selection system pairs with Quadra-Trac II and a Quadra-Drive II system to give the driver control over traction modes that include Sand, Mud, Snow, Rock, and Auto modes. Even with the base setup and a proper set of tires, the Grand Cherokee can tackle far tougher terrain than it’s usually asked. We’ve scrambled through sand and over slick rocks in the Grand Cherokee without fail.

It’s impressive that, in spite of that ability, the Grand Cherokee can also steer and ride as well as it does. Thanks to unibody construction and a well-designed independent suspension, the Jeep remains calm on road, without the trucklike bounding of a body-on-frame SUV. For the ultimate performance, Jeep’s Quadra-Lift air suspension can raise ride height from 6.4 to 11.3 inches, or lower it slightly for better fuel economy. That comes in handy on the track, too, where Grand Cherokees with 707-hp V-8 engines do an incredible imitation of Porsche and Mercedes-AMG and BMW M SUVs, with stellar grip and acceleration.

The 2020 Jeep Grand Cherokee is comfortable, practical, and near luxury-worthy for a family mid-size SUV.

The 2020 Jeep Grand Cherokee hauls five adults, plenty of stuff, and offers luxury-like features in a comfortable interior. It’s the complete package of mid-size SUVs, so we give it 9 out of 10.

While the Grand Cherokee uses the same wheelbase and platform as the Dodge Durango, the Jeep chooses to offer only five seats instead of the third row that the Dodge features. If you can live without the extra chairs, we say opt for the Grand Cherokee, as its big front and rear seats are soft and comfortable, and road manners are outstanding.

Top-tier Summit models include fine leather with embroidered logos and stitching details, as well as real wood and metal trim. Even the base Laredo is well-equipped with its cloth seats and soft-touch plastics, though nearly a decade on, some trim pieces and switchgear are starting to show their age.

Head room is good front and rear, and the rear seats recline up to 12 degrees and offer 38 inches of leg room.

Behind the second row, 36.3 cubic feet of cargo room swallows most gear you could hope to carry, while 63 cubes are available with the rear seats folded flat.

Each trim and special edition or package offers unique upholstery and detailing options, while the SRT and Trackhawk models use suede-effect material and racy trim pieces to remind you what you’re driving.

The 2020 Jeep Grand Cherokee has mediocre safety scores and equipment.

With mediocre safety scores and active-safety features still optional, we give the 2020 Grand Cherokee a 5 out of 10 here.

While the all-wheel-drive model receives five stars overall, the rear-wheel-drive model only manages four stars from the federal government due to its three-star rollover rating, and both get just four stars for frontal crash tests. (We normally would award a point for five stars and deduct one for four stars overall, but have done neither here given these results.) The IIHS had similar concerns for the 2019 model, giving just a “Marginal” score for the driver-side front-overlap test and “Acceptable” and “Poor” ratings for the Grand Cherokee’s two headlight options.

For 2020, Jeep has made active safety features like automatic emergency braking, active lane control, and automatic high-beam headlights available on even the base Laredo model at low cost, but for over $33,000 to start, these features should be standard by now. Blind-spot monitors are standard, as are rear parking sensors.

The 2020 Jeep Grand Cherokee has the features SUV shoppers expect, is well-equipped across the range and luxurious at the top, though priced like it.

The 2020 Jeep Grand Cherokee offers nearly more trims and options than we can comprehend, but it gets very expensive very quickly. That’s worth 7 out of 10 for this category, with extra points for its infotainment system and options list.

Overland and Summit models represent the top of the standard range, and include 20-inch wheels, real wood trim and perforated nappa leather, while the Summit includes all active safety features and plenty more luxury features. The V-6 is standard across the range while the 5.7-liter V-8 and turbodiesel V-6 are optional on Limited and above.

SRT and Trackhawk models dial up the intensity with fender flares, more grille vents, synthetic suede interior elements, big Brembo brakes, and performance monitoring software among other unique, performance-oriented touches. Trackhawk models can be optioned to over $100,000 though, a ridiculous price, no matter the horsepower count.

The 2020 Jeep Grand Cherokee pays for its power and capability at the pump. For its middle-of-the-road to poor fuel economy, we give it 4 out of 10 based on V-6 SUVs with all-wheel drive.

Stepping up to the 5.7-liter V-8 comes with another drop in efficiency as all-wheel drive is standard, managing only 14/22/17 mpg.

The SRT model manages only 13/19/15 mpg with its 6.4-liter V-8, while the supercharged Trackhawk gets just 11/17/13 mpg. Those are supercar-worthy efficiency numbers, but you do get supercar-worthy power.

Be the first one to write a review on 2020 Jeep Grand Cherokee
Rate and Review your car for The Car Connection! Tell us your own ratings for a vehicle you own. Rate your car on Performance, Safety, Features and more.
Write a Review
USED PRICE RANGE
$25,498 - $57,988
Browse Used Listings
in your area

6.5
Overall
Expert Rating
Rating breakdown on a scale of 1 to 10?
Compare the 2020 Jeep Grand Cherokee against the competition
Compare All Cars
Looking for a different year of the Jeep Grand Cherokee?
Read reviews & get prices
Related Used Listings
Browse used listings in your area
See More Used
The Car Connection Daily Headlines