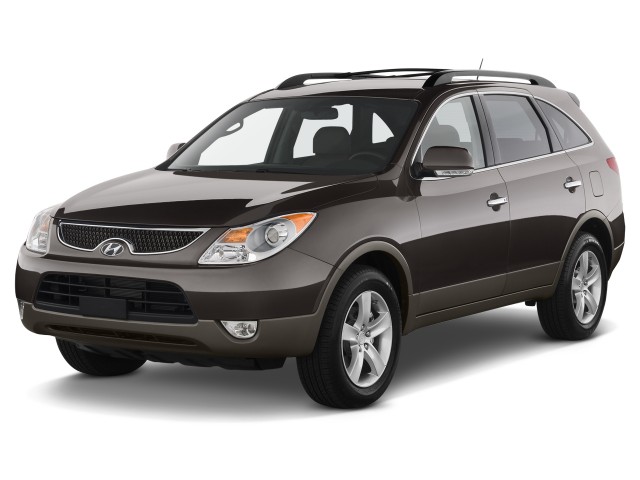 The affordable GLS model is our favorite Veracruz; add on portable Bluetooth and a carry-on GPS and you'll have most of the benefits of the pricier Limited edition.

The 2011 Hyundai Veracruz is spacious and comfortable, though not as sporty or stylistically evolved as the newest competition.

Conservative to a fault, the 2011 Hyundai Veracruz crossover represents the point on the age/value equation that the Toyota Highlander had just a few years ago.

It's undeniably handsome, if a bit anonymous, but the Veracruz has an interior that's built almost to Lexus standards for feel and look. It's also a spacious place, at least in the front rows; the third row seat's as proportionally small as the Veracruz is to the bigger crossovers with seven seats (Highlander, Flex and Traverse), and so is the space available when all three rows are taken.

It's awaiting some safety scores, and in its fifth year on the market the Veracruz still awaits factory-installed Bluetooth connectivity, a rearview camera option, and any or all of the high-tech features that define the Flex and now other crossovers, like the Dodge Journey and Durango.

Still, it's a roomy vehicle that's well equipped for its price. If you like the slightly luxurious look, the 2011 Hyundai Veracruz will certainly help you project a luxury image on a leaner budget.

The 2011 Hyundai Veracruz lacks a sharp visual character, but it's pleasantly rounded and smooth, outside and in.

Is it bland, or is it classically handsome?

The 2011 Hyundai Veracruz isn't the visual shock that Ford's Flex is, and it doesn't resort to the creases and folds of SUV stereotypes like the Honda Pilot does. It's simply a good-looking vehicle without much detail outside. Hyundai patterned the Veracruz after the Lexus RX crossover of old, and its sleek and flowing sideview shows the lessons were learned well. What's lacking, overall, is the sense of drama Hyundai's injected into its latest cars. The Sonata, the Veloster and the Elantra all grab eyeballs with daring crests of metal and dashes of chrome, while the Veracruz simply blends into the background.

Review continues below
The Veracruz is more sure-footed inside, where upscale details and attractive, soft-touch surfaces carry the crossover into a higher plane than you'll experience in the grainy Pilot. It's more like the Toyota Highlander, with subtle curves and flowing lines enveloping the front passengers very mildly. It's a functionally fine workplace too, with big controls and clear divisions of authority, with gauges front and center for the driver, climate and audio controls up high on the center stack where the passenger can read and see them as well. A piece or two detracts from the overall warmth--the windshield reflects a dash piece pretty starkly--but nearly everywhere else, the Veracruz shows how big a leap Hyundai's made in quality feel and perception with its latest products.
7

It's not a memorable drive, but the 2011 Hyundai Veracruz feels more compact than some seven-passenger crossovers.

The 2011 Hyundai Veracruz offers a single powertrain, with a choice of front- or all-wheel drive. It's a competitive performer, but there's not much enthusiasm to be found in the way it drives.

Hyundai's 3.8-liter V-6 teams up with a six-speed automatic transmission in the Veracruz. The 260-horsepower six twists out 257 pound-feet of torque and it delivers adequate, if not blistering performance. It's moving a heavy piece of machinery--the Veracruz weighs about 4300 pounds--but once it's up to speed, the engine handles cruising duty rather well, only running out of steam when it's full laden, with people or cargo.

The Veracruz' six-speed automatic transmission saps the eagerness from the engine. It hesitates to downshift and shift quality feels lumpy. In our experience, it's most reluctant to downshift when pulling up steep grades. The transmission does comes with Shiftronic manual control, but even in this mode the transmission won't let the V-6 run up to its redline.

All-wheel drive is an option, and it goes without saying, if you live outside the winter belt, save the added weight and the front-drive Veracruz will rarely let you down.

Handling is set on the softer side, which gives the Veracruz a smothering quality. The steering feels numb on center, and doesn't build up much weight as the vehicle builds up cornering forces. The brakes lose some sensitivity when saddled with power-adjustable pedals, like all other such systems do. There's plenty of body roll, but on the plus side, the Veracruz rides quite plushly. And since it's a bit smaller than some crossovers in its class, the Veracruz has a compact turning circle and can be easier to park.

Spacious in the front two rows, the 2011 Hyundai Veracruz loses a bit of room in back due to its sloping roofline.

The 2011 Hyundai Veracruz can seat up to seven in three rows, but it loses out to some three-row competitors as it loses space to its curvy silhouette.

The first two rows of seats in the Veracruz offer up ample leg and head room. The seats can feel rather flat, though even moving the front buckets back to the end of their seat travel still left rear-seat leg room for adults.

It's a large vehicle, but the Veracruz loses space efficiency at the third row and beyond. The back seat isn't an option for many adults; kids will be just fine back there, but leg room isn't that plentiful, and entry and exit can be difficult.

The cargo area makes the biggest sacrifices to the sloped hatch. It's just about 13.4 cubic feet behind the third-row seat. If all but the front seats are folded down, though, the Veracruz will hold up to 86.8 cubic feet of stuff, nearly as much as a Flex or a Mercedes-Benz GL-Class.

The 2011 Hyundai Veracruz is on its way to good safety scores, but it's missing some big safety options.

Most large crossover vehicles perform well in federal and insurance-industry crash tests. However, for the 2011 model year, both the National Highway Traffic Safety Administration (NHTSA) and the Insurance Institute for Highway Safety (IIHS) have changed how they rate crash safety--and that means the Veracruz' scores are new.

The 2011 Veracruz gets a "good" rating for front and side-impact protection from the IIHS. However, the NHTSA hasn't issued scores for it as of yet. We'll update this review when ratings are published.

The Veracruz' standard safety equipment includes dual front, side and curtain airbags; anti-lock brakes, traction and stability control; and front active head restraints. Rear parking sensors are also standard, but the Veracruz has no option for a rearview camera, blind-spot monitors, adaptive cruise control, or some of the other high-tech features that have infiltrated the competition.

Used Hyundai Veracruz for sale near

It's not a striking bargain like some of the company's other vehicles, but the 2011 Hyundai Veracruz is fairly well equipped, even in base form.

In the sales war among big crossovers, infotainment features are the latest battle--and it's a battle the Veracruz largely is sitting out.

A Premium package on this trim level adds a power sunroof; a power tailgate; a universal garage door remote; and auto-dimming rearview mirrors.

The Veracruz Limited adds on much more. Leather upholstery is standard; so is a power front passenger seat; 18-inch wheels; automatic climate control; a CD changer and a USB port; a 115-volt power outlet; power control for the steering wheel; and a conversation mirror, which helps drivers keep an eye on the action in the second and third rows.

An LG navigation system is an option on the Limited, but it means sacrificing the CD changer and USB port. A Bluetooth connection is a port-installed option, which means it doesn't have the neat integration with audio systems that a factory system would have--so test it out to see if it meets your needs.

Fuel economy is bringing up the middle of the pack, and the 2011 Hyundai Veracruz doesn't offer much choice in drivetrains.

The 2011 Hyundai Veracruz makes ordering easy, since it's only offered with one powertrain and a choice of front- or all-wheel drive.

However, that doesn't give buyers much choice when it comes to selecting a more fuel-efficient crossover. The EPA rates the front-drive Veracruz at 17/22 mpg; opting for all-wheel drive lowers the numbers to 16 mpg city, 21 mpg highway.

Review continues below
Those ratings put the Veracruz in the lower half of the seven-seat crossover pack. Vehicles like the four-cylinder Toyota Highlander can get up to 20/25 mpg, or as a hybrid, 28/28 mpg; Ford's new 2011 Explorer is rated at 17/25 mpg. It's still better than the Acura MDX and the Volvo XC90, though.
Continue Reading

Be the first one to write a review on 2011 Hyundai Veracruz
Rate and Review your car for The Car Connection! Tell us your own ratings for a vehicle you own. Rate your car on Performance, Safety, Features and more.
Write a Review
USED PRICE RANGE
$7,433 - $12,998
Browse Used Listings
in your area
7.4
Overall
Expert Rating
Rating breakdown on a scale of 1 to 10?
Compare the 2011 Hyundai Veracruz against the competition
Compare All Cars
Looking for a different year of the Hyundai Veracruz?
Read reviews & get prices
Related Used Listings
Browse used listings in your area
See More Used