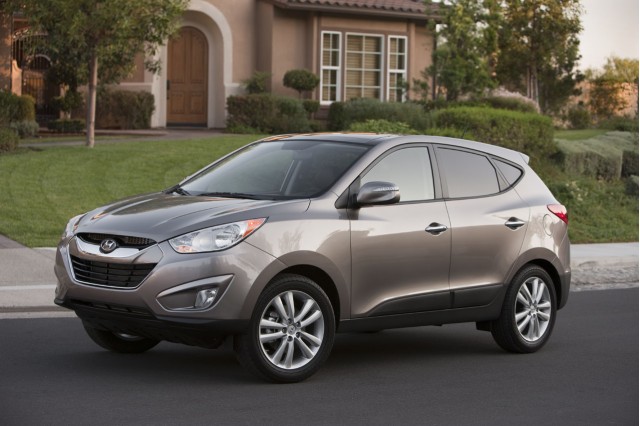 If you drive stick, give the Tucson's manual a try. Only 5 percent of Tucsons will be built with it, but it shifts well and saves fuel.

Much better than its predecessor, the 2011 Hyundai Tucson needs a touch more power and steering feel to top carlike utes like the Nissan Rogue.

A big field of small crossover vehicles has erupted in the years since the Honda CR-V and Toyota RAV4 were new to the market in the 1990s.The Ford Escape and the Subaru Forester joined the game, followed much later by the Nissan Rogue.

The Hyundai Tucson has been an entry in the niche for years, but it wasn't until 2010 that it became a real player. A new design and new running gear made it the most improved crossover (along with its corporate cousin, the Kia Sportage), and the most fuel-efficient one, too.

The Tucson's best features are its dramatic, anti-SUV looks and its big bucket of standard features. There's some of the same sophistication in the look as you'll find in the Elantra and Sonata sedans this year, and it carries through into the cabin. It's a spacious vehicle, with less interior room than some smaller utes but more than in, say, an Acura RDX. And it's full of the stuff its new owners--commuters and small families--will want, including power features and a USB port, not to mention a Top Safety Pick award from the IIHS.

What the Tucson isn't, is a sporty-feeling crossover. The ride's tuned for comfort; the steering and braking need to feel more in touch with the car's road motions, and we're ready for the promised turbo version, since the four-cylinders are only adequate in acceleration.

If you didn't think "fluidic sculpture" would work well on a crossover vehicle, the 2011 Hyundai Tucson will change your mind.

Hyundai's embarked on a new design theme, while it tries to put more time and distance between its plainer past and its new lineup. The 2011 Tucson wears that "fluidic sculpture" look, as do the new Sonata and Elantra.

The sheetmetal inverts the Tucson's bland, upright style sheet from just a couple of years ago. The design hails from Hyundai's European design studios, teamed with those in Korea and the United States, with perhaps more than a casual nod to the Nissan Rogue and the Euro-market Ford Kuga.

On the Tucson, the styling theme sets the crossover apart from a field that's still pretty heavily influenced by old-school SUVs. The Tucson isn't square, nor is it upright: it's curved, crested, and looks quite upscale from its nose to its tail, almost like a miniature Buick Enclave. It gets a little tall and thick toward the rear--some problems can't be resolved with arcs of chrome trim, after all--but the angular taillamps drop some of the visual weight out of the rear end. Some versions have more chrome trim work around the grille and sides, while all editions have black trim that cuts the visual height of the doors on the side view.

The cabin in the 2011 Tucson hits the same global note. A big LCD screen is flanked by chromed vents, and dashes of metallic-painted plastic breaking up plenty of tightly grained, hard black plastic. The Nissan Rogue has the best-finished interior in the niche, and the Honda CR-V has one of the best-fitting cabins even if it seems a touch plasticky, but the Tucson's interior is at least as well done as the cockpits in the Ford Escape and Toyota RAV4.

A new fuel-miser Tucson joins the lineup for 2011, but we're not sure it's a much better prospect than the crossover's larger 2.4-liter four.

The new 2.0-liter four-cylinder makes 165 horsepower and 146 pound-feet of torque. Fuel economy in this version improves over the bigger-displacement Tucson by just a mile per gallon in the automatic-transmission models, and then only on the city cycle. Given that the 2.4-liter four-cylinder feels just adequate at 176 hp and 168 pound-feet of torque, the smaller engine doesn't seem to be worth the trade-off for small fuel-economy improvements.

The larger engine is smooth and relatively vibration-free, even if it keeps the same pace as the Honda CR-V, which is among the slower entries in the class. At launch, the Tucson came with a promise of a turbocharged version; we'll update this review if it's made available for the 2011 model year.

The Tucson comes with a five-speed manual gearbox with a long throw but smooth action. A six-speed automatic is an option on the base version and standard on upper trims. It has a sport-shift mode, but lacks paddles for shifting, so it's likely to be manually shifted only on occasion. It's a good thing it responds reasonably quickly to throttle changes.

The Tucson rides better than it steers. Even in the backseat, there's not as much bounding or bobbling as you might expect in a small crossover. The engine-speed-sensitive electric power steering is the Tucson's trouble spot. It has a tight 34.7-foot turning circle, but it's more artificial in feel than it needs to be, with less direct road feel than we like. The brake pedal has the same sensation. In all, the Tucson's road manners are much improved from the prior generation, but the steering feel in particular could use some more sophistication.

It's among the smaller vehicles in its class, but the 2011 Hyundai Tucson delivers good seating room and a well-organized cabin.

It's not the biggest vehicle in its class, by any means, but the tape measure reveals the 2011 Hyundai Tucson has a longer wheelbase and is wider than the Honda CR-V, Ford Escape, and Subaru Forester. For the record, it's 173.2 inches long, 71.7 inches wide, and 66.3 inches tall.

It still offers more interior room than the Ford Escape and the Nissan Rogue, but the Tucson is noticeably smaller inside than the upright Honda CR-V. It's also significantly less roomy than the Toyota RAV4. To its credit, it outboxes luxury crossovers like the Acura RDX.

In the front row, the Tucson affords driver and passenger plenty of leg room. In first-year models, we thought the leather seats had bottom cushions that tilted too far down, leaving passengers uncomfortable after a hundred miles or so. The back seat is better, in cloth or in leather, with plenty of room for adults. For our dollar, the Tucson's cloth seats are better than the leather-clad ones, at least until the bottom cushions get a bit of reshaping.

The cargo hold has a significant amount of luggage space--enough room for groceries for a week for a family, too. It's not physically possible to wedge in the third-row seat you'll find in the Toyota RAV4, though, and the cargo well is more pyramid-shaped than a rectangular, wide-open space--the kind you'll want to carry your pets in, for example. Interior storage is well planned inside the Tucson, with cubbies and bottle holders in the console and door panels, and a deep glove box up front.

We've been impressed with the fit and finish in the Tucsons we've driven. It's a vast improvement over older Hyundai vehicles, and it's superior to the plain-jane cabin in the CR-V or the Escape. Still, hard plastic is the rule of the Tucson's trim, not the exception.

The IIHS approves, while the NHTSA defers: either way, the 2011 Hyundai Tucson has good safety things going for it.

With the new model year upon automakers, each one is faced with some uncertainty.

Based on new roof-crush data, the IIHS says the Tucson earns its Top Safety Pick award. The NHTSA? It hasn't completed its tests, so the crossover is yet unrated.

In terms of safety gear, the 2011 Tucson covers all the usual bases. Dual front side and curtain airbags are standard, as are anti-lock brakes, traction and stability control. Hill descent control is also standard, along with brake assist, tire pressure monitors, and active headrests.

The Tucson offers drivers good all-around visibility, save for some spots at the rear quarters, where the Tucson's dramatic roofline meets its tailgate.

Used Hyundai Tucson for sale near

The 2011 Hyundai Tucson makes its mark in the crossover world with a remarkably complete list of standard features. It's extremely well-equipped, particularly for its size and price class.

More expensive options on the 2011 Tucson include Hyundai's first panoramic sunroof; premium audio; and a touchscreen navigation system fitted in tandem with Bluetooth streaming stereo audio and a rearview camera. Be careful on the order sheet, though: taking the full complement of features brings the Tucson perilously close to the $30,000 mark.

Review continues below
Hyundai also puts a five-year/60,000-mile, bumper-to-bumper warranty on every Tucson. The limited powertrain warranty extends to 10 years/100,000 miles, far and away the best in the class.
8

The 2011 Hyundai Tucson scores fuel-economy ratings from the EPA that top its class.

Hyundai's taken great care to boost the fuel economy of its entire lineup. It's promising that by 2025, its fleet will average 50 mpg.

The 2011 Tucson does its part, even adding a new model this year to notch up gas mileage a bit. The base Tucson now comes with a 2.0-liter four-cylinder and automatic transmission, and is rated at 23/31 mpg by the EPA. With a five-speed manual transmission, the same engine delivers 20/27 mpg.

Moving up to the larger, 2.4-liter four-cylinder available on uplevel Tucsons, the manual-equipped versions gets 21/29 mpg; the automatic version, 22/31 mpg.

Adding all-wheel drive to this drivetrain drops fuel economy of manual-gearbox Tucsons to 20/27 mpg. With the big engine, the automatic transmission and all-wheel drive, the 2011 Tucson checks in at 21/28 mpg -- still better than many crossovers in its class.

Be the first one to write a review on 2011 Hyundai Tucson
Rate and Review your car for The Car Connection! Tell us your own ratings for a vehicle you own. Rate your car on Performance, Safety, Features and more.
Write a Review
USED PRICE RANGE
$7,126 - $17,990
Browse Used Listings
in your area
8.2
Overall
Expert Rating
Rating breakdown on a scale of 1 to 10?
Compare the 2011 Hyundai Tucson against the competition
Compare All Cars
Looking for a different year of the Hyundai Tucson?
Read reviews & get prices
Related Used Listings
Browse used listings in your area
See More Used
The Car Connection Daily Headlines