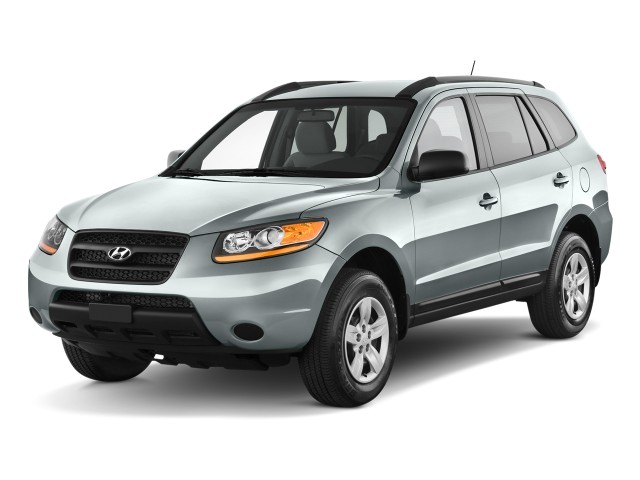 Bring your potential third-row riders along for your Santa Fe test drive; the rearmost seats are tiny and might be too small for teenagers.

The 2009 Hyundai Santa Fe is competent all around, and hard to fault as a well-equipped family SUV.

The Santa Fe, in many respects, best represents Hyundai's improved reputation in the United States. In 2007, the Santa Fe grew in dimensions to somewhere between compact and mid-size and gained standards of refinement and comfort that boosted it near the top of many best-of lists—and to a position that’s competitive with some of the best offerings from Japanese and American automakers.

Where competitors offer economical four-cylinder alternatives, Hyundai continues to provide two different V-6 engines for the Santa Fe. That’s both a plus and a minus; even with the smaller 2.7-liter, the Santa Fe doesn’t get close to the fuel economy of, say, a four-cylinder Toyota RAV4. Both engines are very torquey and responsive, but the difference between them is in refinement. The 3.3-liter engine and Shiftronic five-speed automatic in the upscale Limited and SE models is no drag racer, but it shows a silky, strong yet unobtrusive character that’s absent from the coarser 2.7-liter engine and four-speed automatic in the GLS.

The interior in the 2009 Hyundai Santa Fe is tightly assembled and makes a refreshing design statement that breaks from Euro worship, but up close it disappoints with faux wood and cheap-looking plastics. The Santa Fe's driving feel is surprisingly capable and somewhat sporty compared to that of other crossovers, with a ride that's well controlled but on the firm side.

Just as we now expect from Hyundai models, the 2009 Hyundai Santa Fe comes with a few more features at each price level than we’d get on competing vehicles. Even at the base GLS level, it includes cruise control, automatic climate control, keyless entry, and a six-speaker sound system with XM Satellite Radio. For 2009, Hyundai improves the audio system of the Santa Fe by adding standard USB/iPod auxiliary inputs and realigning its options packages to better suit the demands of its customers.

Hyundai's long 10-year/100,000-mile powertrain warranty erases worries. The Santa Fe is also the safety champion in its segment, receiving all the best safety features of its peers, such as standard electronic stability control and active head restraints, along with the highest ratings in the frontal and side crash tests from both the federal government and the insurance industry. In addition, it's an IIHS Top Safety Pick.

Think of the 2009 Hyundai Santa Fe as a fashionable everyday wear; you won’t stand out, but you’ll fit in nicely no matter where you go.

The stylish looks of the 2009 Hyundai Santa Fe won over reviewers across the board.

According to Cars.com, the 2009 Hyundai Santa Fe is considered a crossover "because of its unibody construction that combines the body and frame in one piece," while giving "the Santa Fe the ride and handling characteristics of a sedan rather than a truck."

The 2009 Hyundai Santa Fe returns in the larger, prettier form it adopted in 2007. "The Santa Fe was upgraded to a midsize [crossover] model from its previous compact size" and that it has a "more-aggressive look,” says Cars.com.

Hyundai gets kudos for looking "more and more like refined machines and less like the plasticky econoboxes the company put out in the 1980s and '90s,” says Cars.com, adding that it has "lines that flow gracefully into each other."

ConsumerGuide says the "styling slightly interferes with visibility to right rear and directly astern," while MyRide.com notes that "it has more the profile of a sporty station wagon than that of a traditional body-on-frame SUV." Cars.com likes the body style since it is "more aerodynamic, with a lower coefficient of drag."

Reviewers almost across the board criticize the 2009 Hyundai Santa Fe's off-road ability while commending its on-road performance.

TheCarConnection.com editors praise the Santa Fe for having a sporty look and excellent road performance. MyRide.com reinforces that, saying, "as long as you don't fling it around corners as if you're in a sports sedan, you'll have no complaints about the Santa Fe's handling." The torquey 3.3-liter engine and Shiftronic five-speed automatic in the upscale Limited and SE models is no drag racer, but shows refinement a class above the 2.7-liter engine and four-speed automatic in the GLS. The Santa Fe's driving feel is surprisingly capable and somewhat sporty compared to other crossovers, with a ride that's well controlled, if also on the firm side.

According to Car and Driver, the Santa Fe comes "standard with V-6 power ... [a] 185-hp, 2.7-liter mill," and you can upgrade to a "3.3-liter V-6 that produces a more impressive 242 horsepower," with "Front- or all-wheel drive ... available." ConsumerGuideAuto further clarifies that the all-wheel drive "allows locking in a 50/50 front/rear power split."

ConsumerGuide gripes that it is "slow to build speed and loses steam going up moderate grades." Edmunds refutes that, stating the "larger V-6 engine is smooth and has plenty of power," and in the Santa Fe, Hyundai has a "solid-performing and practical SUV for city driving."

"Don't count on doing any serious off-road driving. The all-wheel-drive system does not have low-range gearing," says Car and Driver.

The 2009 Hyundai Santa Fe rates high in quality and comfort, with only a couple faults to complain about.

Improved comfort and quality characterize the 2009 Hyundai Santa Fe, with only a few dissenting opinions.

In the Santa Fe, Hyundai "offers impressive room, build quality, and standard safety features," says ConsumerGuide. Unlike other compact crossovers, the Santa Fe is spacious and comfortable in the rear seat area. MyRide.com also reports the "headroom and legroom in the Santa Fe is greater in all rows than in competing models."

Regarding the very small third seat, TheCarConnection.com editors concur with Car and Driver, which says, "Its third row is for tikes and tots only. Other seats, however, are quite comfy for kids and adults alike."

According to ConsumerGuideAuto, the 2009 Hyundai Santa Fe's "engines are subdued at full throttle and remain quiet at routine cruising speeds." However, they note that "road rumble is apparent over some surfaces."

"The faux metal and wood trim is convincing, the headliner is handsome, and no plastics look cheap," says ConsumerGuide. TheCarConnection.com disagrees somewhat. Inside the Santa Fe, Hyundai offers a much-improved interior, and it’s superior to many other crossovers, but can disappoint up close with faux wood and cheap-looking plastics.

The 2009 Hyundai Santa Fe stands out for safety, even in a class of vehicles that has more than its share of high achievers.

When it comes to safety, the editors from TheCarConnection.com find the 2009 Hyundai Santa Fe at the top of the charts.

The Santa Fe is an IIHS Top Safety Pick for 2009, an award the organization gives to vehicles that perform at the top in crash-test safety and come with some especially important safety features. Jalopnik's headline reads, "Insurance Institute for Highway Safety [IIHS] Announces Top Safety Pick Awards for 2009," noting the IIHS "added a crash prevention criterion last year," which requires vehicles to be equipped with electronic stability control (ESC). Jalopnik goes on to recount that "ESC can help drivers maintain control during emergency maneuvers." Cars.com notes that inside the Santa Fe, Hyundai’s “safety features include electronic stability control" as standard, not as an option.

According to the USA Today, NHTSA says stability control "will save 5,300 to 10,300 lives a year when it is on all vehicles" and that its "biggest benefit is its ability to prevent many rollover crashes." USA Today goes on to say, "Hyundai ... is one of few automakers to offer it as standard equipment on a low-priced car."

Hyundai's long 10-year/100,000-mile powertrain warranty erases worries. The Santa Fe is also the safety champion in its segment, receiving all the best safety features of its peers, such as standard electronic stability control and active head restraints, along with the highest ratings in the frontal and side crash tests from both the federal government and the insurance industry. Furthermore, it's an IIHS Top Safety Pick.

The standard-feature list is long, and the price isn’t any higher with the 2009 Hyundai Santa Fe.

In order to better match consumer demands, Hyundai realigned option packages somewhat for 2009, though all versions of the Santa Fe, including the base GLS, come with the most commonly desired conveniences, such as cruise control.

"All trim levels are well-stocked with standard convenience and safety features," reports Edmunds about the 2009 Hyundai Santa Fe. MyRide.com concurs, saying even the base model includes "realistic-looking (but faux) wood-trim accents across the width of the dashboard, surrounding the shifter, and along the door panels."

According to Cars.com, there are three trim lines: the "base GLS, midlevel SE and top-of-the-line Limited." The GLS model comes with "16-inch alloy wheels, 112-watt AM/FM/CD/MP3 audio system with six speakers, rocker panel moldings, heated power side mirrors," and much more. Cars.com also notes that an "optional DVD player for the third row, dual climate zones and fan controls for the second and third rows" are available.

MyRide.com says the Santa Fe has "a 605-watt Infinity Logic 7 audio system is now standard on ... [the] Limited" along with a "power sunroof," while the "navigation system is optional." If you want to add the third-row seat and rear AC, Cars.com states, "buyers must choose the SE Touring Package."

1 Review
5 star
4 star
100%
3 star
2 star
1 star
Rate and Review your car for The Car Connection! Tell us your own ratings for a vehicle you own. Rate your car on Performance, Safety, Features and more.
Write a Review
For 2009 Hyundai Santa Fe