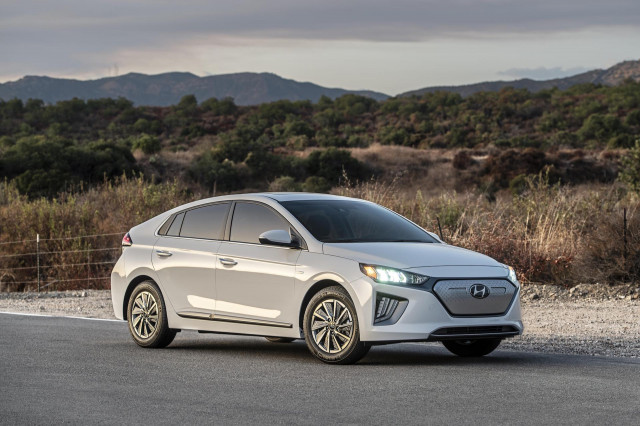 Buy the cheapest Ioniq you can; some credits for fuel efficiency may cut the price even more, and all the necessary safety equipment comes standard.

The 2021 Hyundai Ioniq steps up the efficiency game with hybrid, plug-in hybrid, and electric editions.

What kind of car is the 2021 Hyundai Ioniq? What does it compare to?

The 2021 Hyundai Ioniq is a five-seat hatchback that comes in hybrid, plug-in hybrid, or electric versions. It’s an excellent value and one of the most efficient cars you can buy. As such, it’s a rival for the Toyota Prius, the Kia Niro, the Nissan Leaf, and the Chevy Bolt EV.

Is the Hyundai Ioniq a good car?

We give the Ioniq a TCC Rating of 6.6 out of 10. It earns points with its warranty, its value, and its fuel economy and efficiency. It’s a likable car, though one that’s feeling more dated now that battery-electric vehicles have become more common. (Read more about how we rate cars.)

The Ioniq has a handsome shape that wouldn’t look out of place in any car maker’s lineup. It’s expressly not adventurous; Hyundai wanted it to look conventional to hide all the technology just beneath its skin, so it knitted the Ioniq a friendly face, a sloping roof, and a simple-to-use cockpit.

Tucked beneath all that is a 139-horsepower hybrid system that earns up to 58 mpg on the EPA combined cycle, or a 170-mile Electric edition, or a Plug-In Hybrid in the middle that’s good for 29 miles of all-electric driving. All have no-nonsense handling and a low driving position, as well as moderate acceleration.

The Ioniq shines when it’s put into service during the daily commute. The cockpit’s organized like a sewing basket, neat as a pin, and the front seats have ample support. It’s less welcoming in back, since the Ioniq trims head room in the name of slick aerodynamics, but cargo space blooms to more than 26.5 cubic feet.

The Ioniq hasn’t been fully crash-tested but all versions have automatic emergency braking; adaptive cruise control and blind-spot monitors are available.

How much does the Hyundai Ioniq cost?

The Ioniq Hybrid Blue starts in the mid-$20,000s, and comes packed with an 8.0-inch touchscreen with Apple CarPlay and Android Auto compatibility and power features. High-spec versions add in a 10.3-inch touchscreen, navigation, a sunroof, and leather upholstery. The Plug-In Hybrid strikes a nice balance of price and efficiency, but the battery-powered Electric Limited, at nearly $40,000, is too much.

Where is the Hyundai Ioniq made?

A tidy hatchback shape cloaks the Ioniq’s busload of technology.

Is the Hyundai Ioniq a good-looking car?

Hyundai plays hide and seek with the Ioniq’s flourish of technology. It looks simpler, handsomer, and more organic than a Prius, but the engineering horsepower underneath barely pokes through the conventional body. We give it a 6; it’s still good-looking, after all.

The Ioniq works better than the Clarity or the Leaf or the Prius, because it hasn’t gone weird for weird’s sake. Nothing here would turn off a buyer intent on shopping sleek-looking hatchbacks. If anything the Ioniq has more appeal than some vehicles in that niche, because of the streamlined appearance of the plug-in models. LED lighting caps the sweeping shape and costs it some head room, though.

The Ioniq cockpit is functional but plain; no radical re-imagined future happens in here. It’s an everyday economy-car look that goes well with the almost banal driving experience, normcore if that’s still a thing. At the top electric end of its range, the Ioniq is awash in touchscreens and digital displays and buttons that replace shift controls, but it’s not the radical futurism we’ve been promised, time and time again.

Efficiency wins out over enthusiasm in the Ioniq.

How fast is the Hyundai Ioniq?

Not at all. Hyundai conceived of the Ioniq as a high-efficiency hatchback, not a hot one. It’s a Prius-like creation with sky-high fuel economy and with a low priority put on all else. It’s a 4 for performance, with ratings based on the Hybrid edition’s average handling and sluggish acceleration.

The Ioniq Hybrid pairs a 43-horsepower (32-kw) electric motor and a 1.56-kwh lithium-polymer battery with a 104-hp 1.6-liter inline-4. Power rises to a net 139 hp, delivered to the front wheels via a 6-speed dual-clutch automatic. The pace is moderate, but the refinement is relatively high. It doesn’t feel slow, because the Ioniq Hybrid weighs just about 3,000 pounds. The Ioniq Hybrid delivers consistently high fuel economy, so there’s little reason to go easy on the gas pedal.

Ioniq Plug-In Hybrids adopt the same drivetrain, but their battery is upsized to 8.9 kwh. Acceleration isn’t much quicker but the PHEV delivers 29 miles of electric driving.

The Ioniq also has paddle controls that let the driver control its regenerative braking; it engages smoothly and the system is integrated well. What it isn’t is very sporty. The Ioniq rides well enough, but its steering is electric-car numb. The multi-link rear suspension and low-rolling resistance tires, the Ioniq Hybrids have a friendly driving feel that low battery placement accentuates.

Electric Ioniqs have a 134-hp motor powered by a 38.3-kwh lithium-polymer battery. This package is good for up to 170 miles of range. The EPA rates it at 133 MPGe, and Hyundai says its 7.2-kw charger enables an 80% charge in under an hour on a 100-kw fast-charger.

Is the Hyundai Ioniq 4WD?

No, all versions are front-wheel drive.

The Ioniq could use better back-seat accommodations.

Is the Hyundai Ioniq a comfortable car?

We give the Ioniq a 6 for comfort and utility, with a point above average for its cargo space.

Front passengers have ample comfort and room. They sit low in thickly bolstered seats wrapped in grippy fabric (or in leather on the most expensive models). The Ioniq may be short and low, but it’s wide and shoulder room is better than expected in the front.

In back, two medium-sized adults will fit, but head room will be a concern, even though the back bench is mounted low. That’s because the Ioniq has a low-cut roofline that dives into the rear seat space.

The back seats flip forward to increase storage space to as much as 26.5 cubic feet (or 23 cubic feet in battery-electric Plug-In and Electric editions).

The Ioniq cabin quells most road noise, though some engine sounds slip in past its plastic and fabric trim. For the efficiency it offers, the sometimes inexpensive look of its materials seems like a fair trade.

Is the Hyundai Ioniq a safe car?

We don’t rate the Ioniq here; while the IIHS has called it a Top Safety Pick in the past, outdated scores and a lack of scores from the NHTSA at all prevent us from assigning a grade.

New Hyundai Ioniq for sale near

Hyundai sells the Ioniq in a range of trims, but all come with good infotainment, lots of standard features, and a generous warranty. Buy a less expensive model; it’s still an 8 here by our yardstick.

How much does a 2021 Hyundai Ioniq cost?

Priced in the mid-$20,000s, the Ioniq Hybrid Blue is inexpensive for its hyper-efficient ways. It’s our pick, since it’s stocked with automatic emergency braking, automatic climate control, keyless ignition, 15-inch wheels, and an 8.0-inch touchscreen with Apple CarPlay and Android Auto compatibility.

Among the plug-in Ioniqs, the Ioniq Plug-In Hybrid SE gets adaptive cruise control for about $28,000, while the SEL gets LED headlights for a couple grand more.

How much does a fully loaded Hyundai Ioniq cost?

Is the Hyundai Ioniq good on gas?

The versions that require gas are quite miserly. The Ioniq’s a 9 here.

The EPA scores the Ioniq Hybrid at 55 mpg city, 54 highway, 55 combined. In Blue trim, its low rolling-resistance tires boost those ratings to 57/59/58 mpg.

Add a plug, and the Ioniq Plug-in Hybrid boasts 29 miles of all-electric driving before its gas engine kicks in, for a 52-mpg combined rating, or a net of 119 MPGe.

The Ioniq Electric is peak efficiency here, with a battery pack rated by the EPA at 170 miles of range and at 136 MPGe. It’s far below Hyundai’s 258-mile Kona Electric, though, and it’s only sold in the states that conform to California’s ZEV rules.

Be the first one to write a review on 2021 Hyundai Ioniq
Rate and Review your car for The Car Connection! Tell us your own ratings for a vehicle you own. Rate your car on Performance, Safety, Features and more.
Write a Review
$33,245
MSRP based on Blue Hatchback
Change Style

Engine
Trim
Other
Check Availability
in your area
6.6
Overall
Expert Rating
Rating breakdown on a scale of 1 to 10?
Compare the 2021 Hyundai Ioniq against the competition
Compare All Cars
Looking for a different year of the Hyundai Ioniq?
Read reviews & get prices
Related Used Listings
Browse used listings in your area
See More Used
The Car Connection Daily Headlines