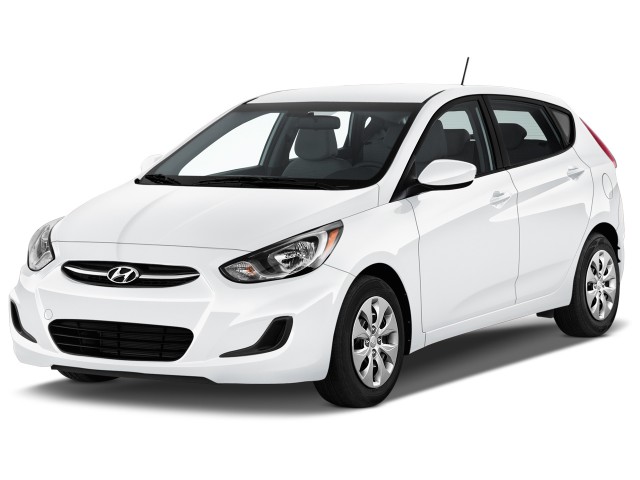 Of all the different versions, we prefer the Accent Sport hatchback. It's the most practical and best-looking, and offers improved handling with its sportier suspension and steering.

The 2016 Hyundai Accent is a practical and economical subcompact car, but crash-test scores are below par.

The Hyundai Accent is a subcompact available as a five-door hatchback or four-door sedan. Launched as a 2012 model, the Accent has not changed much for the past couple of years. It carries over essentially unchanged for the 2016 model year, though the model nomenclature has been revised.

The Accent is a good choice among subcompacts, although its crash-test scores are cause for concern. Its strengths are value and interior space. Its handling and performance don't vary much from that of the bigger subcompacts, but the Accent feels more mature than the Fiat 500 or Ford Fiesta. Other competitors include the Chevrolet Sonic, the Honda Fit, the Nissan Versa, and the mechanically similar Kia Rio.

Designed for the 2012 model year and revised for 2015, the Accent still looks good. Its design is based on Hyundai's soc-called "Fluidic Sculpture" design language, giving it an elegant look. Interior quality is good with the expected exception of the trim bits down low and, with optional features,

We think the the five-door hatchback is the more attractive of the two body styles; the four-door sedan is less attractive. The five-door nails the design, mixing the usual hatchback profile with the cues and details that have come to define Hyundai's first modern design language. Inside, the layout is clean and simple, with streamlined controls and low-gloss plastics.

The Accent accelerates, steers, and handles in an adequate, predictable way. Acceleration performance is lackluster with the automatic. However, its direct-injection 1.6-liter inline-4 is very fuel-efficient, and it mates well with the smooth-shifting 6-speed automatic that includes a Sport mode and manual control. The manual gearbox, which has a light clutch, is also a good choice, allowing better acceleration performance, better economy and more enjoyable driving.

While the Honda Fit might put up better interior-room numbers, the Hyundai has a very comfortable, spacious interior for passengers, one of the best in its class. Even tall passengers will be able to get in and out easily and have enough headroom and legroom in the front seats. Back-seat space is also respectable for a car this size, and there's plenty of room for smaller items, with bins and trays for phones, bottles, and coins. With the seatbacks up, you get a little more cargo room in the Accent sedan, although you lose some of the hatch's versatility and superior style.

Even compared to other small cars of its kind, the Accent does not rate very well with the NHTSA or the IIHS. It scores four stars with the federal government, although there are extra notes about the performance in side crashes. In IIHS testing, the Accent receives a score of Poor on the agency's new small frontal overlap test.

The Accent comes with a high level of standard equipment, but don't look for leather, navigation or even a sunroof on the options list. The 2016 Hyundai Accent comes in two trim levels: the standard Accent SE available in hatchback and sedan versions and the Accent Sport, which comes only as a hatch. All have power features and air conditioning, while some versions  get a tilt/telescoping wheel, cruise control, Bluetooth, and satellite radio.

This year the changes to the Accent are relatively minimal, with an updated-and-improved base audio system, a new one-touch turn signal, sliding sun visors, and a driver's blind-spot mirror.

The Accent still looks fresh in its fifth year, particularly the hatchback model.

With its 2012 redesign, the Accent's design came into its own, borrowing elements from the "Fluidic Sculpture" ethos that Hyundai was using at the time. It was updated slightly for 2015. The Accent remains quite handsome.

For 2015, the Accent was updated with a new grille and LED running lamps. The look is still quite pleasing, and the changes keep it modern looking. We think the hatch is the better looking of the two body styles, the short proportions favoring the five-door over the four-door sedan.

The trapezoidal frame around the grille and the shoulder lines running gracefully back are true to other Hyundai designs. With the hatchback, that shoulder line is drawn all the way out across the longer roofline to its tightly pinched hatch. The hatchback's vertical taillights wrap around the D-pillars.

Inside, a matte-finished dash cap evokes the appearance of carbon fiber, with big boomerang lines molded into it. Overall, there are few criticisms of the interior, save for the stretches of hard, shiny black plastic that live on the lower regions of the doors and the center console. Considering the price point, it's remarkable how finely finished this entry-level car feels.

The Accent performs with comfortable predictability, but it's sluggish and the ride can get jarring.

There is nothing exciting about how the Hyundai Accent comports itself on the road, but that also means there are no surprises with its handling or overall dynamics, either. It's utterly predictable, which surely appeals to some no-nonsense buyers.

The Accent's 1.6-liter inline-4 makes a best-in-class 138 horsepower and a respectable 123 pound-feet of torque, a benefit of its direct fuel injection. Equipped with the automatic, the Accent takes about 10 seconds to accelerate from zero to 60 miles per hour, which is slow.

To get the most out of the engine, it has to be revved above 3,500 rpm—something many commuters might not be eager or even able to do in traffic-clogged roads. On the other hand, it's quite fuel-efficient if you can keep the revs as low as possible. The engine goes well with either the manual gearbox, with its light clutch, or the smooth-shifting 6-speed automatic that includes a Sport mode and manual control.

The engine is taxed with more than two people aboard, underscoring that the Accent is a small, relatively lightweight car.

The Accent feels more graceful, if not edgy, on winding roads. The suspension features twin-tube shocks and a stabilizer bar for the front struts, while the rear uses a torsion beam. Ride quality can be jarring over potholes and bouncy on frost-heaved highways, though that is true of any short-wheelbase vehicle.

The steering is tuned to mimic the strong-centered heft of a large sedan. It's fine, but it also doesn't make the Accent feel as lively as it could. We like the somewhat meatier feel of the electric power steering in Sport versions.

There's more passenger space in the Hyundai Accent than in most subcompacts, if not the flexibility of the class-bests.

Inside, the Hyundai Accent is roomy and comfortable, among the best in its class. From the standpoint of versatility, however, it cannot compete with the Honda Fit and its excellent configurable "Magic Seat" arrangement.

Today's Accent is longer than its predecessor, at about 162 inches long as a five-door and 172 inches long as a four-door. Most of that extra length went into the passenger compartment, making this Accent significantly roomier than before, with more passenger space than most other cars in this class.

The front seats have plenty of leg room for taller drivers. The seats are height-adjustable, and even in the higher positions most should still have enough head room. On longer drives, the Accent's subcompact-car compromises start to surface: the steering column tilts but doesn't telescope, for example. We wouldn't rate longer-distance seating comfort very high either, although you get a little more bolstering in the Sport models, which might help in all-day drives.

Rear-seat space is respectable for a subcompact, though we found the rear-seat cushions a bit low. The rear seats fold forward easily in both the sedan and the hatch, a good feature, and that makes the most of the available space. We'd opt for the hatchback and its additional cargo flexibility.

Other interior storage is ample. The glove box is large, and Hyundai provides bins and trays for smaller items like cellphones, bottles, and coins.

Ride quality in the Accent is quite good, and it is relatively quiet underway, though there is some boominess at higher speeds, particularly with the hatchback. The Accent's finishes are average or better for the class, a cut above prior Accents in the use of softer and more finely-grained plastics.

The newest, latest crash tests are a source of concern for the Hyundai Accent.

The Hyundai Accent ranks low in the class when it comes to crashworthiness ratings, once again.

Compared with the competition, which keeps improving, the Accent has been a disappointment. The Accent received only four stars in its overall score from federal safety officials, and in test results the agency pointed to intrusion at the left rear door in the side impact test, which struck the rear passenger dummy, indicating "a higher likelihood of thoracic injury."

The Accent received mostly "Good" scores from the IIHS, but side-impact protection was deemed "Acceptable." The IIHS gave the Accent a "Poor" rating on its new small front overlap test; this latest test is tougher than the other tests and has been challenging for cars like the Accent, which were designed before the test was developed.

Driver visibility is a challenge in the Accent hatchback due to the large D-pillars and the rear-seat headrests. Large mirrors help, but rearview cameras and blind-spot monitors are not available.

Used Hyundai Accent for sale near

The Accent has a fair amount of standard equipment, though some newer safety technology is absent from the options list.

For 2015, the Accent came in GLS, GS, and Sport versions. This year, Hyundai's rejiggered the lineup, and all Accents are either SE or Sport models.

The 2016 Hyundai Accent SE is available in hatchback and sedan, the Accent Sport comes only as a hatchback. The sedan costs less than the hatchback and comes with fewer standard features.

The Accent Sport upgrades further with 16-inch wheels; sport-tuned steering; heated side mirrors; fog lamps; a sliding armrest; and special trim. A loaded Accent Sport with automatic transmission tops out at around $18,000.

The Accent's fuel economy is good in absolute terms, but low for its size class.

The Hyundai Accent is among the few cars available today that gets better fuel economy from its manual transmission.

Fuel economy for the 2016 Hyundai Accent is an EPA-estimated 26 mpg city, 37 highway, 30 combined with the automatic transmission and slightly better at 27/38/31 mpg with the manual. The automatic has an ActiveEco button that triggers early upshifts to improve gas mileage, while models with the manual gearbox use an eco shift light to suggest the driver can upshift to save fuel.

Those numbers are competitive, but not the best in the class. The Honda Fit, for example, earns stellar fuel-economy ratings of 33/41/36 mpg combined with its standard CVT.

While driving the Accent, we have been able to achieve fuel economy close to that of the EPA figures when we kept the revs low.

Be the first one to write a review on 2016 Hyundai Accent
Rate and Review your car for The Car Connection! Tell us your own ratings for a vehicle you own. Rate your car on Performance, Safety, Features and more.
Write a Review
USED PRICE RANGE
$7,995 - $18,999
Browse Used Listings
in your area
6.6
Overall
Expert Rating
Rating breakdown on a scale of 1 to 10?
Compare the 2016 Hyundai Accent against the competition
Compare All Cars
Looking for a different year of the Hyundai Accent?
Read reviews & get prices
Related Used Listings
Browse used listings in your area
See More Used
The Car Connection Daily Headlines