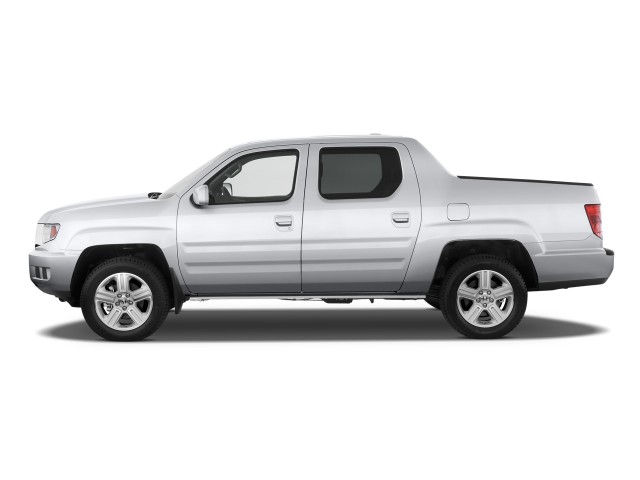 The no-option, base Honda Ridgeline might be the best bargain of the lineup--but you'll miss the optional Bluetooth and Honda's well-designed navigation system.

If you need a better-driving truck that can haul the goods on occasion, the 2011 Honda Ridgeline might be a better choice than a true full-sizer.

The Honda Ridgeline hasn't been received too warmly by the truck-buying public. In part, it's because more capable full-size pickups can be much less expensive--but you can also blame the pickup mentality, which forces smart, grown men to buy trucks strong enough to haul a 50-foot trailer, when all they own is a jet ski or two.

The Ridgeline sits in an awkward point on the pickup curve, no doubt. It's capable of executing some near-full-size tasks, but it's outfitted only with a five-foot bed. The cabin doesn't open into the cargo area like it does on the bigger but more functional Chevrolet Avalanche; and even its more intriguing features, like the sealed cargo bin under the bed floor, only make sense when the truck bed is....empty.

The Ridgeline is the best-driving pickup, without a doubt. Honda's wonderful 3.5-liter V-6 has the charm no other base six-cylinder truck can muster, and the five-speed automatic knocks off shifts like brews after a long shift. Fuel economy isn't a strength, oddly, but handling is. It feels a lot like the former Honda Pilot (not the misdirected 2010-2011 model), which means a more direct steering feel, and a more controlled ride, than the jagged sheetmetal might imply.

The 2011 Ridgeline sports no changes, and there's considerable doubt that Honda will replace it when its time comes due--probably after the 2012 model year. To get more truck buyers to notice, it might have to get more conventional--but as the latest Toyota Tundra has proven, even big-truck street cred doesn't guarantee any more sales. Not when the Ram, F-150 and the Silverado and Sierra are at the top of their game.

The 2011 Honda Ridgeline is one odd-looking truck, and it's not grown on us in its short life.

The Honda Ridgeline defies convention in so many ways, we'd almost like to give it a pass when it comes to grading its unconventional exterior styling.

It's difficult, given the Ridgeline's ungainly proportions and its obvious debt owed to the SUV pieces under its skin. Honda touched up the sheetmetal for the 2009 model year...and it didn't help matters much. The new headlights and taillights made it seem a bit more luxurious--but the angles of the rear pillars, their thickness and the height of the rear fenders around the pickup bed just don't hit the elusive truck target of ruggedness. The new grille, on loan from the Pilot SUV, is probably the design's biggest offense.

The cabin's a much more pleasant place. The conventional dash stacks controls in a rectangular bin, and big knobs for the climate and audio controls are cued up for easy operation with a gloved hand. The Ridgeline feels like the last-generation Pilot SUV in many ways inside, and that's a compliment. If only the awkwardly shaped door handles were as easy to grab with the hands, as they are to catch your eyes.

The 2011 Honda Ridgeline's drivetrain and suspension give it premium handling for the class.

The 2011 Honda Ridgeline doesn't have the seemingly endless powertrain combinations that you used to find on Chevy and Ford trucks. Even those pickups have downsized. The Ridgeline's singular powertrain, though, is a standout in the pickup class, nonetheless.

In the Ridgeline, a 250-horsepower, 3.5-liter V-6 engine provides all the motivation. It's coupled to a five-speed automatic transmission, and standard four-wheel drive. Since it's somewhat lighter than a true full-size pickup, the Ridgeline feels brisk and energetic off the line, and even when it's laden it musters good passing power.

The four-wheel-drive system feels more sophisticated than the setups in most pickups, save for the Sierra Denali's AWD setup. In the Ridgeline, a rear differential lock will engage at speeds of up to 18 mph, which means all-weather capability is fine. Off-roading isn't really its forte, given its thinner torque down low, but the Ridgeline will haul a decent amount of stuff. The payload's rated at 1,550 pounds, and towing maxes out at 5,000 lb.

The Ridgeline pays back owners who choose its vaguely alternative pickup vibe with a great sense of road feel and good handling. It's better than most other compact and mid-size trucks, and a step up from the dynamics of the full-sizers, though the Ram 1500 has great steering and ride feel. The Ridgeline is true to its SUV roots--it handles more like a crossover vehicle, with well-damped ride motions and steering that carves almost eagerly into corners. The Ridgeline avoids the big-bump watusi that afflicts some big trucks, too, since it's founded on an independent suspension.

The 2011 Honda Ridgeline can't compete with real full-size pickups in raw cargo capacity, but it has one of the most comfortable cabins for four adults.

Other big pickups come in a wide variety of body styles and bed lengths. The Honda Ridgeline only comes one way--as a crew-cab pickup with space for five in front and a short bed in back.

The Ridgeline's one of the best trucks to sit in, even if you fold in the luxurious Ram Longhorns and F-150 Platinums and Sierra Denalis. The Honda's hront seats are supportive, though not that soft. The cabin has plenty of spread-out space, and the adults in the back are nearly as comfortable as those in front. And if no one's riding in back, the Ridgeline's back bench splits, folds and tumbles forward to reveal a storage area for smaller cargo than needs a weatherproof home.

The Ridgeline's bed has some nifty truck tricks of its own, but the cargo bed itself is just over five feet long. It will hold a 4x8 sheet of plywood with the tailgate down, but that wood will need the optional bed extender to stay firmly in place. The Ridgeline does better when it's used for lighter duty, or as the primary transport for Honda-built ATVs, snowboards, surfboards, bikes, and the like--Honda makes its own bed accessories and mounts specifically for this purpose.


Under the bed floor is the Ridgeline's secret. A sealed 8.5-cubic-foot compartment is concealed below the cargo bed, and it's large enough to hold a large cooler. Another neat piece of engineering is the tailgate's dual-swing mode: it can open to the side or fold down, when it can also support up to 300 pounds, even while moving.

The 2011 Honda Ridgeline fares well in IIHS crash tests, but the NHTSA's numbers aren't in yet.

The Ridgeline has performed well in crash tests over its five-year lifespan, but this year's results are subject to the changing criteria of both crash-test agencies.

The National Highway Traffic Safety Administration (NHTSA) has revamped how it grades crash-test safety, and while the Ridgeline performed well in the past, it hasn't yet been rated for 2011. Over at the Insurance Institute for Highway Safety (IIHS), the Ridgeline carries over its "good" scores for front and side impact protection--but it loses its Top Safety Pick designation as roof-crush standards aren't available.

The Ridgeline comes with standard front side airbags, rollover-sensing side-curtain bags covering both rows, anti-lock brakes, and electronic stability control are included across the model line. Active head restraints are now a part of the package.

A rearview camera is now bundled with the optional navigation system, but the Ridgeline does not offer the latest safety technology, such as lane-departure warning systems, blind-spot detectors, or adaptive cruise control.

Visibility is an issue in the Honda pickup. The thick rear pillars block most of the view to the rear quarters of the truck, making parking more difficult than it could be--though it's mitigated with that optional rearview camera.

Used Honda Ridgeline for sale near

The 2011 Honda Ridgeline comes with lots of luxury features, and big-money options include navigation and Bluetooth.

The 2011 Honda Ridgeline has more standard equipment than any bargain-basement full-size pickup from the domestics or the Japanese automakers--because Honda pitches it more as an upscale SUV replacement than as a hardcore pickup.

Stepping up to the mid-range Ridgeline RTS adds on some exterior refinements, including machine-finished alloy wheels, privacy glass, and body-colored door handles and mirrors. The RTS also comes with an upgraded 160-watt sound system.

Honda typically bundles features in trim lines, and doesn't offer many stand-alone options. The Ridgeline has some add-ons available that are relatively new to the pickup class, but now also available on trucks from Dodge, Ford, GM, Toyota and Nissan. The options list includes a voice-recognition navigation system with on-the-go Zagat restaurant information and a rearview camera, and Bluetooth hands-free connectivity.

The 2011 Honda Ridgeline doesn't pace the field with fuel economy, though its drivetrain and packaging might suggest it should.

The Ridgeline's proposition is that it's the Honda of pickups, and shoppers might automatically think it's lighter and more efficient because of the brand's reputation. It fares about as well as some full-size pickups in fuel economy, but it's a smaller truck with less of the outright towing and hauling capability of those larger vehicles.

The EPA rates the Ridgeline at 15/20 mpg for its single drivetrain configuration--V-6 and four-wheel drive, coupled to an automatic transmission. It's about the same fuel economy you'd get in a base V-8-powered Chevrolet Silverado 1500, which tops the Ridgeline at 15/22 mpg. The V-6 Ford F-150 hits 17/23 mpg, though it may not be as quick as the Ridgeline.

Honda hasn't said whether it will offer a hybrid or diesel Ridgeline--or even if it will keep selling the truck beyond the 2011 model year.

Be the first one to write a review on 2011 Honda Ridgeline
Rate and Review your car for The Car Connection! Tell us your own ratings for a vehicle you own. Rate your car on Performance, Safety, Features and more.
Write a Review
USED PRICE RANGE
$13,650 - $25,999
Browse Used Listings
in your area

7.4
Overall
Expert Rating
Rating breakdown on a scale of 1 to 10?
Compare the 2011 Honda Ridgeline against the competition
Compare All Cars
Looking for a different year of the Honda Ridgeline?
Read reviews & get prices
Related Used Listings
Browse used listings in your area
The Car Connection Daily Headlines