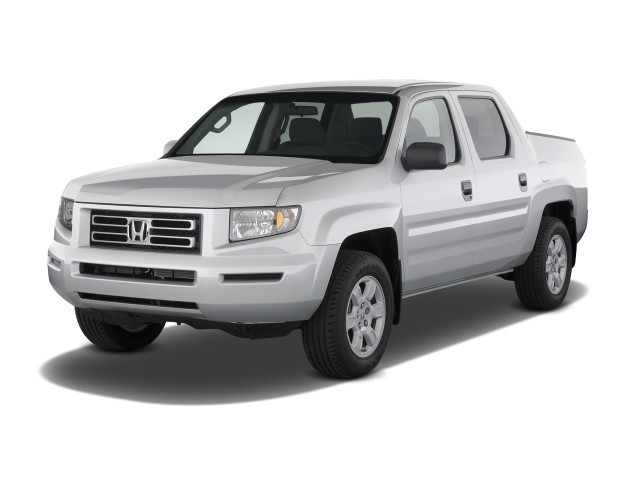 The 2008 Honda Ridgeline is one of those vehicles that hasn't sold as well as Honda hoped. A good deal will be easy to find, as long as you're armed with the right pricing information. Unfortunately, the nicest options like DVD navigation aren't available on less expensive versions.

The 2008 Honda Ridgeline is a flexible light-duty truck with a plush feel, but it can't tackle all the tasks a full-size truck does well.

The car experts at TheCarConnection.com studied a wide range of road (and off-road) tests of the 2008 Honda Ridgeline to compile this conclusive review. TheCarConnection.com's resident truck lovers also drove the new Ridgeline to help you decide which reviews to trust where opinions differ, and to add more impressions and details and provide you with the best information.

A half-ton crossover utility truck, the 2008 Honda Ridgeline is built to tackle rough terrain, and it features versatile cargo room for an active crowd. Whether you're hauling heavy payloads over rough roads or cruising down the freeway towing up to 5,000 pounds, the Honda Ridgeline is a mighty V-6 truck with decent gas mileage at 15 mpg city and 29 mpg highway.

The four-door Honda Ridgeline may not win a beauty contest with its thick C-pillar giving its body a stiff shape and its large nose leading the way, but this pickup has big, comfortable bucket seats in the front and well-angled rear seatback that makes up for its rather unconventional look.

If you're looking for a smoother ride over rough roads and easy handling, the Honda Ridgeline answers the call with its tight, controlled carlike ride. Based on a unibody structure, the Honda Ridgeline is bigger than mid-size trucks from Dodge and Nissan, yet as a lighter-duty vehicle, it carries a 5,000-pound tow load capacity and has a five-passenger crew cab.

The 2008 Honda Ridgeline boasts its exceptional carrying and towing capacities from an integrated closed-box frame with unit-body construction and a powerful 247-horsepower, V-6 engine with four-wheel independent suspension. The standard variable torque management system routes engine power to the wheels for the most traction when conditions demand. Instead of a traditional two-speed transfer case, the Ridgeline offers lighter-duty, all-wheel drive for towing and carrying capacity in its bed.

Let's take a look at that all-important cargo room. If you're carrying lots of little things like a cooler, along with folding barbecue and picnic supplies, the five-passenger crew cab features a split-fold-and-tumble rear seat with hidden underseat storage, a two-way tailgate that can open either from the top or the right-hand side, and a unique lockable and weather-protected 8.5-cubic-foot trunk that's integrated into the cargo bed. For bigger loads, the Ridgeline's bed is more than 4 feet wide inside and is longer than 5 feet. With the tailgate down, the bed holds a 4-by-8-foot sheet of plywood that defines full-size truck capacity. However, you won't be able to close the dual-action tailgate that opens to the side or as a conventional tailgate.

Stability control, side and curtain airbags, and anti-lock brakes are standard on the 2008 Honda Ridgeline. And don't forget that the Ridgeline was the first four-door pickup to achieve the highest government crash-test rating of five stars for both frontal and side-impact tests. Plus, the Honda Ridgeline has the lowest chance of rollover among all pickup trucks tested by the National Highway Traffic Safety Administration.

The 2008 Honda Ridgeline’s unconventional sheetmetal detracts from a good interior.

Most car reviewers view the 2008 Honda Ridgeline as an unconventional-looking truck, and in general, reviews read by TheCarConnection.com found the Honda Ridgeline fairly distasteful.

Reviewers from ConsumerGuide were among the kindest when describing the Honda; 2008’s Ridgeline offers "a true-truck design in a relatively modest package." More often, reviewers weren’t as neutral. The 2008 Honda Ridgeline has been called "ugly" with its long nose, unexpectedly modern styling, and unibody construction. USAToday says, “Ridgeline could replace the Pontiac Aztek as the automotive metaphor for ugly.” The front end in particular struck the paper as bad: “The shiny part of the grille resembles a huge heating element or radio antenna.” Car and Driver says it has a “face to frighten truckers.”

While most pickup trucks look basically the same, the Honda Ridgeline is different with "no gap between the cab and the box," says Cars.com. "It looks like one solid piece when viewed from the side." Car and Driver is less tactful, declaring, "unfortunately, it's still ugly." CNet notes the “chunky styling that will polarize opinions as surely as will its country of origin. With a deliberately bold face and an Escalade EXT-esque buttress treatment between the cabin and the bed, the Ridgeline's distinctive exterior design cues may seem overwrought to America's dyed-in-the-wool pickup buyers.”

Inside, Motor Trend says “knobs are where you'd expect them and buttons where they should be.” The cabin is much less controversial, with CNet observing that the Honda Ridgeline’s interior “impresses in most regards.” Automobile reports that “interior features oversize matte silver knobs, a huge speedometer, and meaty door pulls (the better to distract you from the hard plastics everywhere else in the cabin).”

The 2008 Honda Ridgeline lacks V-8 power, but makes up for it with carlike performance.

As Kelley Blue Book notes, the 2008 Honda Ridgeline is designed "less for work and more with play in mind."

TheCarConnection.com finds most car reviewers like the Honda Ridgeline's 3.5-liter, 24-valve, V-6 engine. It’s rated at 247 hp and 245 pound-feet of torque. The V-6 engine of the 2008 Honda Ridgeline is quite adequate for both city and highway driving, although perhaps it falls short of a true trucklike driving experience. Edmunds says, “the V6 is smooth, with plenty of power for cruising, but lacks the low-end grunt needed for bigger hauling jobs.”

Most reviewers believe the Ridgeline falls short of the standard set by some V-8-powered competitors. "Despite ample engine output, passing power isn't quite as exuberant as expected," says Cars.com.

The standard five-speed automatic transmission helps the Ridgeline accelerate from 0-60 mph in 8.5 seconds. ConsumerGuide reports of the Honda, 2008’s Ridgeline is "better than adequate thanks in part to a smooth, responsive transmission" and is "on par with rival compact pickups" with V-6 engines.

“Handling is relatively agile and carlike,” Edmunds says. The Ridgeline is spawned from the last-generation Honda Pilot crossover, and as a result, Edmunds adds, “the Ridgeline's four-wheel independent suspension (unique in the truck world) endows it with handling that offers un-trucklike smoothness, making it a natural fit for city streets.” Car and Driver feels that the Ridgeline “drives like a car.”

The 2008 Honda Ridgeline comes with standard four-wheel drive. However, reviewers are quick to point out Honda Ridgeline's absence of a low-range gear on rugged trails. But when the trip involves hauling lots of stuff, the Ridgeline "is an ideal road trip vehicle," says Edmunds. The Ridgeline is "tough, practical and a capable off-roader," says Car and Driver of the Honda; 2008’s can tow up to 5,000 pounds "with aplomb."

As for fuel economy, the 2008 Honda Ridgeline offers a respectable 15 mpg city and 20 mpg highway.

The 2008 Honda Ridgeline is a comfortable, well-built with truck with many ingenious storage features—and a smaller truck bed.

Most reviewers found the 2008 Honda Ridgeline is more a comfortable family vehicle with rugged trucklike attributes than a workhorse truck.

Edmunds admires the interior of the Honda; 2008’s Ridgeline has "comfortable seats, plenty of storage cubbies, sound ergonomics." And its small size makes it a "viable option as the sole family vehicle." But many car buyers are looking for the Honda Ridgeline as a cargo hauler.

Rather than having a separate cab and bed, TheCarConnection.com found Honda Ridgeline's unibody construction unites the two, making for a truly versatile vehicle. "It offers a roomy cabin for four with a great set of front bucket seats and a unique storage compartment," says Kelley Blue Book.

However, ConsumerGuide points out that the heavy use of plastic paneling "disappoints." Also, ConsumerGuide says the controls are all typical of Honda vehicles, with simplistic gauges and rather hard-to-reach radio and navigation controls.

Seating is superior; this pickup has big, comfortable bucket seats in the front and a well-angled rear seatback that makes up for its rather unconventional look. Edmunds says the front bucket seats are “firm, well-shaped and comfortable.”

Still, most consumers buy a pickup for the cargo room, and the Ridgeline's cargo bed carries 4-by-8-feet sheets flat, if the tailgate is dropped. One of the Ridgeline's drawbacks is its 6.5 feet of floor length, while most of its competitors offer longer cargo length. Automobile points out that “there's no GM-style mid-gate to extend the cargo box.” Even so, the Ridgeline's duo tailgate is impressive with its swing-open or swing-down features.

Many reviewers are impressed with the Honda Ridgeline's utilitarian "covered and lockable space -- enough for three regular golf bags," says ConsumerGuide. This lockable space is under the truck bed, and “the ultra-practical box shape allows it to swallow even a giant-size cooler-or, with its waterproof periphery and built-in drain plug, it can be used as a cooler itself,” Automobile says.

With lots of standard safety features and top-notch safety ratings, the 2008 Honda Ridgeline is one of the safest pickup trucks on the road today.

TheCarConnection.com found the 2008 Honda Ridgeline has one of the best safety ratings for a pickup with the five-star front and side impact ratings from the National Highway Traffic Safety Administration (NHTSA) as well as a four-star rating for four-wheel drive rollover.

Used Honda Ridgeline for sale near

The 2008 Honda Ridgeline has an impressive list of features, some of which are only available on the most expensive version.

Most reviews read by TheCarConnection.com view the 2008 Honda Ridgeline as plentiful in features for cruising around town, commuting to work, hiding valuables, hauling cargo, towing big loads, and going on weekend adventures.

In terms of features in the Honda, 2008’s Ridgeline comes in four trim levels for the 2008 model year with the RT as the base model. The midlevel RTS comes with a seven-speaker 160-watt audio system and six-disc changer with subwoofer. The RTS also adds controls built into the steering wheel, dual-zone climate control, a power driver's seat, and alloy wheels.

The RTX is the sportiest trim level available, featuring a trailer hitch with trailing wiring, alloy wheels, a beefier grille, and door handles painted the same color as the truck's body, according to Cars.com.

The RTL is the Ridgeline's most luxurious ride, sporting a leather-trimmed interior, heated front seats, moonroof, XM Satellite Radio, and an electronic compass built into the rearview mirror of the Honda; 2008 Ridgelines can be outfitted with a voice recognition navigation system and mobile device auxiliary jack, so long as you’re buying the RTL model.

1 Review
5 star
4 star
100%
3 star
2 star
1 star
Rate and Review your car for The Car Connection! Tell us your own ratings for a vehicle you own. Rate your car on Performance, Safety, Features and more.
Write a Review
2008 Honda Ridgeline 4WD Crew Cab RT

Honda Ridgeline what to expect