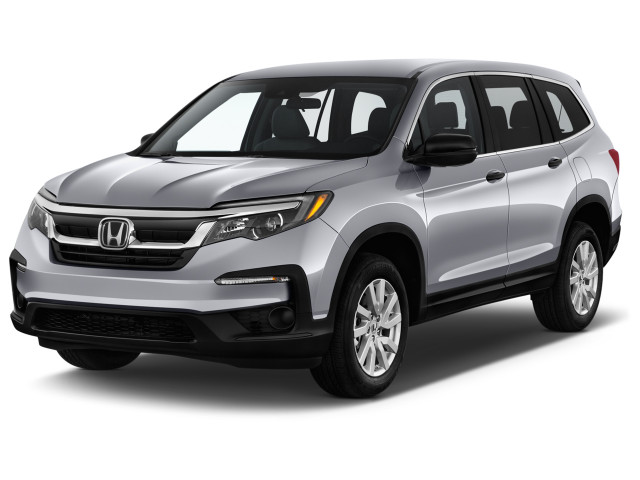 Look to the 2019 Honda Pilot EX and EX-L for the best blend of tech and value.

The 2019 Honda Pilot has a few years under its belt, but it wears its age well. This three-row crossover SUV’s exceptional blend of utility, comfort, and safety makes it as essential to family life as Wet Wipes, Costco, and maybe Total Wine.

The 2019 Pilot enters the new year with minor changes to its styling, an updated optional infotainment system with a volume knob, revisions that make the transmission on uplevel trims more docile, and active safety tech standard across the lineup.

We rate the Pilot at 7.0 out of 10, a well-deserved score that should merit it a spot on any shopping list. (Read more about how we rate cars.)

Whether it’s trimmed out as an LX, EX, EX-L, Touring, or Elite, and with seven or eight seats, the Pilot uses a luxury-grade 280-horsepower V-6. LX, EX, and EX-L trims use a 6-speed automatic transmission that pairs well to the V-6. Tourings and Elites swap in a recalibrated 9-speed automatic that occasionally seems confused by the number of gears it has. Front-wheel drive is standard and all-wheel drive is a $1,900 option for all but the Pilot Elite, where it’s standard.

There’s no hybrid powertrain on offer and that’s a shame since all versions of the Pilot are rated at a perfectly average 21 to 22 mpg combined.

The Pilot rides softly, even with the available 20-inch wheels on higher-trim versions, and it eats up highway miles in comfort. Its steering is crisp and precise, making it surprisingly fun to drive down a curvy road. Off-roading isn’t the Pilot’s forte, but its 7.3 inches of ground clearance and four drive modes help it handle dirt roads and sandy beaches just fine.

Inside, EX and higher trims feature an 8.0-inch touchscreen for infotainment with Apple CarPlay, Android Auto, and, finally, a volume knob. Smart tech touches abound such as a public address system that uses Bluetooth-paired headsets and a microphone to let the driver keep tabs on third-row passengers. A smartphone app works with the available wi-fi hotspot to let passengers control audio, infotainment, and climate—even from the third row.

All eight seats can handle adults in comfort. The Pilot comes standard with a three-piece middle row that can be swapped out for individual captain’s chairs. At the press of a button on some trims, the second row slides out of the way for better access to the third row.

The 2019 Pilot aced federal and independent crash testing. Standard automatic emergency braking, adaptive cruise control, and active lane control put the Pilot in line with rivals from Toyota and Subaru and ahead of domestic competitors.

The base Pilot LX does family duty without complaint, but we’d upgrade to the Pilot EX with its better infotainment, its heated seats, its three-zone automatic climate control, and its blind-spot monitors. For about $37,000, it’s hard to beat.

The 2019 Honda Pilot bridges the gap between crossovers and minivans.

The 2019 Honda Pilot has pleasant, inoffensive looks inside and out that should age well. That’s enough to earn the 2019 Pilot 7 out of 10 points. (Read more about how we rate cars.)

This year’s styling tweaks hardly make the outgoing Pilot yesterday’s news. New LED headlights and a revised grille design up front sit above a faux skid plate. At the rear, the Pilot boasts updated headlights and more extensive chrome. The updates don’t change the Pilot’s rounded, organic two-box shape that splits hairs between crossovers and minivans such as Honda’s own Odyssey.

Make no mistake, even with its unpainted black plastic accents and new wheel designs, the Pilot looks better in a suburban strip mall than trudging up a mountain pass.

Inside, the latest Pilot is subdued, with subtle colors and few bold moves. Base Pilot LX trims use a 5.0-inch screen that doesn’t befit a price tag above $30,000, but the glossy 8.0-inch display in EX and higher trims looks the part. Honda plays it safe inside the Pilot, with low-sheen surfaces and few garnishes. Even the color palette of tans and grays hardly inspires.

The 2019 Honda Pilot rides well and its V-6 engine provides it with good acceleration.

Not all 2019 Honda Pilots are the same when it comes to the way they drive. They’re all comfortable and quiet and they all accelerate well, but our rating here applies to the LX, EX, and EX-L trims with their stout 6-speed automatic transmission. We give them 6 out of 10 points, with one above average for their comfortable ride quality. (Read more about how we rate cars.)

The 9-speed automatic in Pilot Touring and Elite trims looks great on paper, but even a host of changes for the 2019 model year don’t elevate it above average.

Underhood, all Pilots share a 3.5-liter V-6 rated at 280 horsepower that provides good thrust and luxury-level refinement. It’s an engine almost too good for the duties it’ll be tasked with, and it helps the Pilot lug up to 5,000 pounds in all-wheel-drive configuration. (Pilots with front-wheel drive can tow 3,500 pounds.)

The smart-shifting standard 6-speed automatic with its conventional gear lever is always a step ahead. Our issues with the 9-speed start with its silly button interface, but extend to an occasionally confused feel when called upon to shift down a cog or three. The latest version of the 9-speed automatic starts in second gear in most situations, which avoids some of the low-speed clunkiness seen in last year’s version of this transmission. At speed, however, it tends to hunt for the correct ratio and never feels as premium as its gear count and price tag suggest.

There’s no compromise when it comes to ride quality, though. The Pilot takes big bumps in stride, whether with the 18-inch wheels on most models or the available, flashy 20-inchers. Acoustic windshield and front side window glass in higher-trim Pilots keeps road noise at bay, too.

The Pilot’s steering is quick and responsive and it hustles down a curvy road with a sense of confidence.

When the road turns to dirt, the Pilot has above-average chops thanks to more ground clearance than most rivals and a four-mode traction control system that includes a useful hill-hold in some modes. The optional all-wheel-drive system requires no driver intervention and performed well on a sandy stretch of road we encountered on a preview drive.

Few crossover SUVs handle passengers and their gear better than the Honda Pilot, although no model feels luxurious.

The 2019 Honda Pilot has terrific room for passengers and whatever they might bring with them—from juice boxes to suitcases. We rate it at 9 out of 10, awarding it points for it handles passengers in all three rows, its voluminous interior, and smart touches for storing smaller items. (Read more about how we rate cars.)

All but the base Pilot LX feature a 10-way power driver’s seat that’s all-day comfortable. Models with leather upholstery add memory to the driver’s seat, too. We’d like to see adjustable lumbar support and a height-adjustable passenger’s seat in higher-trim models, though.

The second row in most Pilots seats three in comfort, but Touring and Elite trims can be fitted with individual captain’s chairs separated by a durable center console. EX and higher Pilots have a nifty button that, when pressed, moves the second row forward—even with a child seat still attached—to allow for good access to the third row. Although not as spacious as the rearmost seats in the VW Atlas, the Pilot is a close runner-up.

Behind the third row, the Pilot has 16.5 cubic feet of space in most models. Fold the third row and that grows to nearly 47 cubes, and maximum cargo space is nearly 84 cubic feet in most versions of the Pilot.

Additionally, the Pilot has numerous bins and pockets scattered throughout the cabin and a highly configurable center console. Where some rivals might simply carve out a bin, Honda designers thoughtfully include spots for different size drinks, notepads, pens, and cellphones.

The only thing that holds the Pilot back is its materials. At around $40,000, they’re class-competitive. For the nearly $50,000 a Pilot Elite commands, we’d like to see dressier surfaces and more soft-touch materials.

The 2019 Honda Pilot comes standard with a high level of advanced safety tech.

Every 2019 Honda Pilot leaves the factory with a full suite of active safety tech and top-notch crash-test scores.

This year, Honda made its previously optional suite of tech—adaptive cruise control, automatic emergency braking, and active lane control—standard equipment on every Pilot. Base Pilot LXs don’t include blind-spot monitors, but they’re standard on EX and higher trims.

The IIHS rates the Pilot a Top Safety Pick+ as long as it has the LED headlights fitted to Touring and Elite trims. The LED/halogen headlights on LX, EX, and EX-Ls rate "Acceptable" on account of some glare.

The NHTSA, meanwhile, rates the Pilot at five stars overall and four stars for rollover.

Used Honda Pilot for sale near

The 2019 Honda Pilot wants for little, except in spartan Pilot LX trim.

The 2019 Honda Pilot is available in a wide range of trim levels, each competitively priced.

We rate the Pilot at 6 out of 10, giving it a point above average for its good value and another for its standard automatic emergency braking, but dialing one back for the weak base infotainment system. (Read more about how we rate cars.)

The Pilot lineup starts at about $32,500 for the LX trim with front-wheel drive. All-wheel drive costs $1,900 more. The base Pilot LX comes with power features, a 5.0-inch display for its audio system, active safety tech, and 18-inch alloy wheels.

It’s not lacking much for family duty, but we’d step up to the $35,300 Pilot EX, which adds an 8.0-inch touchscreen for infotainment with Apple CarPlay and Android Auto compatibility, blind-spot monitors, heated seats, a 10-way power-adjustable driver’s seat, and keyless ignition.

For about $38,800, the Pilot EX-L adds leather seats, a power tailgate, a moonroof ,and 4-way power adjustment for the passenger’s seat. Navigation and a rear-seat entertainment system are paired together for $2,000.

Pilots with navigation include compatibility with a smartphone app that lets passengers control audio and climate as well as send destinations directly to the navigation system. Although Honda’s audio interface is clunky, the rest of its infotainment system is thoroughly modern.

The Pilot Touring costs $43,500 and includes a 9-speed automatic transmission, a 560-watt audio system, a mobile wi-fi hotspot, and a few other items. Second-row captain’s chairs are optional on the Pilot Touring, but not LX, EX, and EX-L trims.

Topping the lineup for nearly $50,000, the Pilot Elite loads on cooled front seats, rain-sensing windshield wipers, a panoramic moonroof, and a few other items. The Pilot Elite comes in all-wheel drive only.

The 2019 Honda Pilot’s fuel economy is average for a three-row crossover.

Under its hood, the 2019 Honda Pilot’s 3.5-liter V-6 delivers good power. Unfortunately, it also uses a fair amount of fuel. The Pilot ranks just average among three-row crossovers SUVs at 4 out of 10. (Read more about how we rate cars.)

The Pilot Touring and Elite use a 9-speed automatic rated at 20/27/23 mpg with front-wheel drive and, again, all-wheel drive knocks each figure down 1 mpg. Pilots with the 9-speed automatic also include a stop/start system that cuts out the engine when the vehicle is at a standstill to save fuel.

All Pilots are rated to use regular unleaded fuel.

2 Reviews
5 star
50%
4 star
50%
3 star
2 star
1 star
Rate and Review your car for The Car Connection! Tell us your own ratings for a vehicle you own. Rate your car on Performance, Safety, Features and more.
Write a Review
2019 Honda Pilot Touring 8-Passenger AWD

1 - they removed the right hand mirror Camera. Dumb 2 - changed the left hand control button on steering wheel. Dumb 3 - Engine shutoff with brake should be an item you can select.
people found this helpful.
Was this review helpful to you? Yes
2019 Honda Pilot Touring 7-Passenger AWD