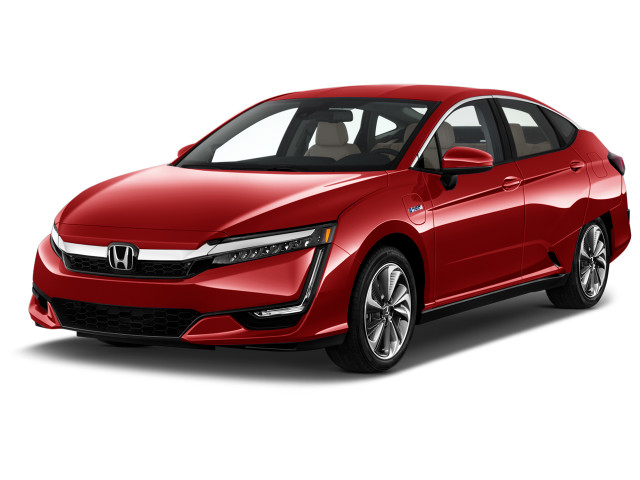 Shop for a deal—or wait around for one. Honda has at times offered some great lease deals on the Clarity Electric and Clarity Plug-In Hybrid.

The 2020 Honda Clarity offers three comfortable, well-equipped ways to go about your daily routine—probably without producing any tailpipe emissions.

The Honda Clarity lineup consists of three different versions—plug-in hybrid, electric, and fuel-cell—that are so different that they might as well have been separate models.

What each of these cars have in common is that they’re niche models that stand out from other choices for their efficiency, while offering more than the typical amount of comfort and features versus other eco-focused models.

While the Clarity isn’t a standout for performance or styling, we give it an overall rating of 6.0, largely due to its efficiency and great standard-feature set. (Read more about how we rate cars.)

The Clarity’s design is polarizing but in a much more low-key way than, say, the designs of the Toyota Mirai or Prius. While the front of the car has the familiar Honda grille, it’s clear that the Clarity family goes for top aerodynamics, and the portly rear end design somewhat hides a small but functional rear window that improves rear vision. Inside, the look fits right in with the Honda family, and some lighter colors and soft materials really give this an upscale look and cheery but not garish look and feel.

The model that’s viable for the widest range of families is the Clarity Plug-In Hybrid. It has a 1.5-liter inline-4 and a version of Honda’s two-motor hybrid system, which powers the front wheels with electric-motor torque the vast majority of the time but can clutch the engine in during gentle cruising for better efficiency. It will go 48 miles on a charge of the 17-kwh battery before the gasoline engine needs to start—and then 42 mpg combined after that, in hybrid mode. Or you can recharge the battery in about 2.5 hours on Level 2 (240V).

The Clarity Electric is only offered in California and Oregon, with a 25.5-kwh battery pack has just an 89-mile EPA-rated range. The benefit of such a small battery is that the battery can charge quickly—to 80 percent in just a half-hour on a 50-kw CCS fast-charging connector, or in four hours on Level 2.

The third (and arguably most obscure) version of the Clarity is the Clarity Fuel Cell. This may well be the best-driving of the three versions, with quiet and responsive performance from its 174-hp electric motor system, fed by a 103-kw hydrogen fuel-cell stack, with a 1.7-kwh battery buffer to give it hybrid-like capability to store away energy when braking. It goes up to 360 EPA-rated miles on a fill of the hydrogen tank.

Here’s the big but: The Clarity Fuel Cell is only offered through just 12 approved California dealerships that are close enough to roughly 40 hydrogen fuel-cell fueling stations—split between the LA region, the San Francisco Bay area, and Sacramento.

In any of its versions—and especially the hydrogen-powered version, where it has the most settled ride and is the best-equipped—the Clarity feels like it could bear Honda’s Acura luxury badge. It’s comfortable, tight, and quiet, and has a very spacious cabin feel, with seating for five in what feels like a mid-size sedan cabin.

Most of the Clarity lineup comes well-equipped, with power front seats in all but the base Clarity Plug-In Hybrid. An 8.0-inch infotainment system with Apple CarPlay and Android Auto compatibility is included, as are dual-zone climate control and keyless ignition, while top Touring trims add leather upholstery and navigation.

This year Honda has added a pedestrian-warning system and heated mirrors. Automatic emergency braking, blind-spot monitors, active lane control, and adaptive cruise control are also included. What’s lacking for the Clarity lineup are official crash-test results from either of the U.S. testing programs.

Although the Clarity’s efficiency numbers can be tough to process (not a single one is fueled only with gasoline), what’s particularly impressive about the Clarity is that, in any of its versions, it can accomplish a typical U.S. commute without tailpipe emissions.

Be the first one to write a review on 2020 Honda Clarity
Rate and Review your car for The Car Connection! Tell us your own ratings for a vehicle you own. Rate your car on Performance, Safety, Features and more.
Write a Review
USED PRICE RANGE
$27,998 - $29,998
Browse Used Listings
in your area
6.0
Overall
Expert Rating
Rating breakdown on a scale of 1 to 10?
Compare the 2020 Honda Clarity against the competition
Compare All Cars
Looking for a different year of the Honda Clarity?
Read reviews & get prices
Related Used Listings
Browse used listings in your area