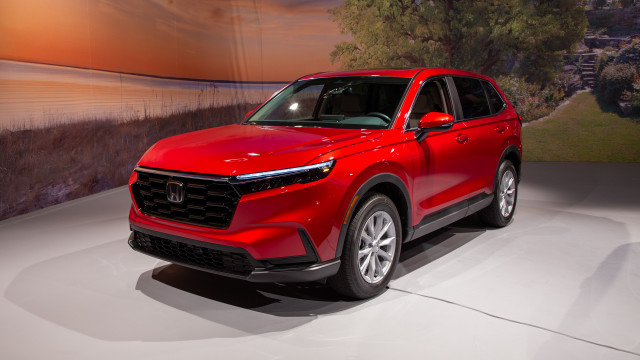 If you want the hybrid powertrain, you’ll have to wait as gas models launch first this summer.

The redesigned CR-V comes with impressive equipment and more room inside than ever before.

What kind of vehicle is the 2023 Honda CR-V? What does it compare to?

The 2023 Honda CR-V is a compact SUV that competes in the most popular segment in automotive. It goes up against other mainstays like the Toyota RAV4, Ford Escape, Hyundai Tucson, and Subaru Forester.

We’ll have to wait until we get behind the wheel to make a final ruling, but the CR-V has been a perennial top-seller in this class with its emphasis on comfort, efficiency, and safety. The redesigned CR-V looks to build on last year’s TCC Rating of 6.5 out of 10 by improving the CR-V’s styling and technology offerings. (Read more about how we rate cars.)

The CR-V gets a full redesign for the 2023 model year that shuffles around the compact SUV’s trim levels and powertrains. Instead of the CR-V Hybrid receiving its own trim structure, it’s been folded into the regular CR-V’s lineup and nomenclature.

Exterior styling is reflective of the CR-V’s growth (it’s 2.7 inches longer), as the crossover looks larger and more imposing than before. Where the previous model tapered off at the rear, the back is now more squared off and gives it a more traditional utility profile. Changes up front include a more prominent front grille that looks like it was borrowed from the Passport or Ridgeline, Honda’s larger and traditionally more capable offerings. The influence of the latest Honda Civic is also present here, with the A-pillars getting thinned out and two strong lines running down each side of the hood. The EX and EX-L versions look boring in comparison to the Sport and Sport Touring models. Those models have more detail on the bumpers, black wheels, and rectangular exhaust openings.

Under the hood the base powertrain in the EX and EX-L is the same 1.5-liter turbo-4 that makes 190-hp in last year’s model and is mated to a continuously variable automatic transmission (CVT). The Sport and Sport Touring both use a hybrid powertrain, which features a 2.0-liter 4-cylinder engine and a pair of electric motors. The system produces a total output of 204-hp and 247 lb-ft of torque, an improvement of 3 hp and 15 lb-ft over last year’s Hybrid model. For the first time, hybrid models will also be able to tow up to 1,000 lb, and Honda says the system will now do a better job of mimicking the stepped acceleration feel of a gas drivetrain. Front-wheel drive is standard on all trims except for the Sport Touring, with all-wheel drive optional. Standard hill descent control and a new snow mode have been added for 2023 as well.

We’re waiting for one more big piece of information for the CR-V: fuel economy. Honda’s smaller HR-V was also redesigned this year and it got worse fuel economy than the outgoing model, so we’re hoping that the CR-V can avoid the same fate.

Inside, the CR-V’s styling closely mimics the Civic with a metallic mesh trim piece running across much of the dashboard below a standard 7.0-inch or optional 9.0-inch touchscreen. The larger screen adds wireless Android Auto and Apple CarPlay, while the smaller screen still requires use of a cord. The instrument cluster also gets a 7.0-inch display of its own. Though the smaller HR-V had nice storage spaces on the side of the transmission tunnel for each passenger, the CR-V makes do with a small cubbly in front of the gear shifter and a large center console bin.

The CR-V’s growth has made the backseat noticeably larger; head room and leg room (up 0.6-inches) are good for adults and the lack of a center floor hump (even on AWD models) allows even the middle passenger to be comfortable for short trips. Cargo room measures 36.3 cubic feet behind the seats (1.2 cubic feet more than last year’s gas models) and it expands to 76.5 cubic feet with seats folded down.

There are no safety options on the CR-V, since everything comes standard. That includes automatic forward emergency braking with a wider field of view, blind-spot monitors, adaptive cruise control that works down to a stop, active lane control, and a driver attention monitor.

Pricing information is not yet available.

In North America at one of three plants, in Ohio, Indiana, or Canada.

Be the first one to write a review on 2023 Honda CR-V
Rate and Review your car for The Car Connection! Tell us your own ratings for a vehicle you own. Rate your car on Performance, Safety, Features and more.
Write a Review
See Your Price For 2022
Compare the 2023 Honda CR-V against the competition
Compare All Cars
Looking for a different year of the Honda CR-V?
Read reviews & get prices
Related Used Listings
Browse used listings in your area
See More Used
The Car Connection Daily Headlines