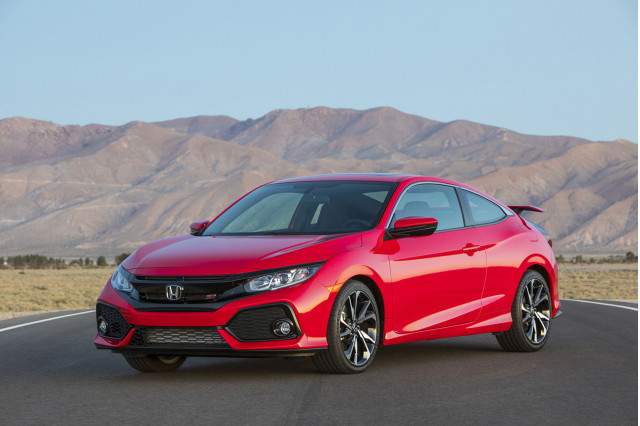 The 2019 Honda Civic is most fun in turbocharged guise, so we say stick with the Civic EX-T.

Safety upgrades this year make the 2019 Honda Civic as compelling as ever.

The 2019 Honda Civic injects more personality into the driving experience than we’re used to with most compact cars. For 2019, the Civic also adds standard active safety gear to the equation.

The Civic lineup includes coupes, sedans, and hatchbacks, and starts in LX trim, with EX, Sport, EX-L, EX-T, and Touring taking the range from simple to luxurious. The manual transmission-only Civic Si and Type R high-performance variants make up for what they lack in subtlety with a thrilling driving experience.

Base Civic LX, Sport, and EX sedans and coupes use a 158-horsepower 2.0-liter inline-4, while hatchbacks as well as sedan and coupe EX and Touring trims feature a zippier 174-hp 1.5-liter turbo-4.

The Civic Si subs in a 205-hp version of the turbo-4 and an adaptive suspension. The hatchback-only Civic Type R tacks on love-it-or-hate-it aero styling bits and love-it-or-you’re-crazy 306-hp, 2.0-liter turbo-4 paired to excellent suspension tuning. The Civic Si may lack the all-wheel drive of some rivals, but it’s hard to beat for its balance of fun, refinement, and frugality. We could say that about a Civic LX, too.

Most non-Si and Type R Civics on dealer lots feature a docile continuously variable automatic transmission (CVT), but a 6-speed manual is optional on some trims.

Chief among the Civic’s assets are its fluid handling and comfortable ride. Inside, its interior is roomy in sedan guise. The hatchback offers better cargo utility and would be our choice. A 5.0-inch infotainment screen comes on the base Civic LX, but all other models use a 7.0-inch touchscreen for infotainment with Apple CarPlay and Android Auto compatibility.

From mild to wild, the 2019 Honda Civic has a look and a bodystyle for everyone.

With three body configurations and considerable differentiation between trim levels, it’s hard to rate the 2019 Honda Civic lineup’s styling with just one number. We land on a 7 out of 10, giving it a point above average for its daring exterior and another for its classy interior. (Read more about how we rate cars.)

The sedan is the most popular 2019 Civic body style, even if it’s easy to mistake as a hatchback at first. Its silhouette channels the Audi A7, the poster child for svelte styling. But where the Audi’s tail ends in a utilitarian hatchback, the Civic features a conventional trunk. This year’s styling updates swap chrome for glossy black accents up front for a cleaner look.

The Civic Coupe is the fashion model of the lineup with dramatic character lines running the length of its body. It looks especially good in this year’s new Sport trim with its 18-inch alloy wheels and additional black accents.

It’s a shame that the Civic hatchback’s busy styling winds up being our least favorite since it has the most utility of the lineup. The hatchback rides on the same 106.3-inch wheelbase as the rest of the range, but its truncated tail drops 4.4 inches from behind the rear wheels.

Civic Si trims—coupe and sedan only—tack on different exterior trim and sportier wheels. The hatchback-only Civic Type R goes a few steps too far with its boy-racer looks. We’re in favor of a dressed-down Civic Type R for adults, but the good news is you don’t have to look at body kit from the driver’s seat.

Inside, the Civic takes a comparatively conservative approach with a wide center console, numerous pockets and bins for smaller items, and tasteful trim bits. The standard 5.0-inch screen looks too small, but it’s reserved for the Civic LX trim only. Other Civics use a 7.0-inch touchscreen that fits the dash better.

The 2019 Honda Civic shines for its balance, even in fire-breathing Type R guise.

Unless you need a pickup bed or all-wheel drive, there’s a 2019 Honda Civic that’s right for you. For our scoring, we look at the Civics most commonly found on dealer lots. They rate above average for their ride and for their handling, earning them a 7 out of 10 on our performance scale. (Read more about how we rate cars.)

The Civic Type R is worth another point for its underhood muscle, but we realize that the appeal of a rocket-ship Honda Civic is limited.

Civic LX, Sport, and EX trims feature a 158-horsepower 2.0-liter inline-4 paired to either a 6-speed manual or a continuously variable automatic transmission (CVT). The Civic’s base engine is quiet enough and provides decent power for commuting duties. Honda’s CVT doesn’t work like a conventional automatic, but it gets the job done well. Its gear and pulley system simulates a single gear that adjusts continuously to maximize power or efficiency. If all CVTs were like Honda’s, they’d lose their iffy reputation. This transmission works perfectly for commuting duty.

Opt for the EX-T, EX-L, and Touring trims or any version of the Civic hatchback and Honda swaps in a 1.5-liter turbo-4 rated at 174 hp in some configurations and 180 hp in others. Not only is the turbo-4 more powerful, it can be more fuel-efficient in normal driving conditions. This gem of an engine emits a gentle underhood rumble. The CVT can exacerbate the engine’s turbo lag, which requires some acclimation.

Quick, direct steering and a taut, but compliant, suspension makes the Civic as capable rushing down curvy road as it is slogging through a congested city. Civics with the standard 16- and 17-inch alloy wheels ride the best. The 18-inch wheels on Civic Sport and Touring versions look good but transmit more road imperfections to the cabin. Turbocharged coupes and sedans and certain versions of the hatchback have rear suspension bushings filled with hydraulic fluid that make them feel even more composed.

On the highway, the Civic tracks well and settles into comfortable, relaxing cruiser mode.

Though the latest Civic Si doesn’t have the old model’s VTEC (that’s variable valve timing fanciness) zest, it is a model of approachable performance. A two-mode adjustable suspension lets drivers toggle between normal and sport modes at the tap of a button, which seems like a fair trade-off for the loss of VTEC.

If we had our druthers, we’d ask Honda to improve the Civic Si’s brakes. An extra 20 hp wouldn’t hurt, either.

If your calendar is filled with track days and/or you live where maps are full of squiggly lines, the Civic Type R should be on your shopping list. The Type R uses a 2.0-liter turbo-4 rated at a hefty 306 hp thanks to VTEC. This “little engine that could” loves to rev and pairs beautifully to the standard 6-speed manual.

The Civic Type R shuttles power to the front wheels, which would worry us if not for its standard helical limited-slip differential and high-performance tires. The Type R displays remarkable balance for sending that much power forward.

The 2019 Honda Civic pairs compact proportions with mid-size space, not to mention an upscale feel.

Given its small size, the 2019 Honda Civic has an impressively spacious cabin—albeit with some compromises, depending on the Civic you select.

We rate the Civic range at 6 out of 10, landing there with a point above average for its roomy rear seats. (Read more about how we rate cars.)

Up front, drivers enjoy good vision and conveniently arrayed controls. The standard seats are comfortable enough, with good adjustment for tall occupants, and are wrapped in tough-feeling cloth upholstery on LX, Sport, and EX trims. A power-adjustable driver’s seat comes with leather upholstery on EX-L and Touring trims.

Rear-seat riders have good leg room and excellent access in sedan and hatchback models. Coupes, predictably, make the second row more challenging to access. Despite a wheelbase shared across all three body styles, the Civic sedan has the most leg room (37.4 inches, compared to about 36 for hatchbacks and coupes).

The Civic sedan’s 15.1 cubic-feet of cargo capacity approaches some mid-size sedans. Hatchbacks are shorter yet much roomier: 25.7 cubic feet with the rear seat up and 46.2 cubes with the rear seats folded flat. The sloping rear window limits utility compared to a crossover SUV, but the Civic Hatchback will still swallow a bicycle with its front wheel removed. Coupes sacrifice space for style and come in with just 12 cubic feet of cargo space.

Notably, a subwoofer included in the Civic Touring trim level eats into some cargo space.

Civics we’ve driven have exhibited a quality feel with ample use of soft-touch materials and low-sheen plastics.

This year’s addition of active safety tech to all models makes the 2019 Honda Civic an even better choice.

Newly standard active safety gear should make the 2019 Honda Civic even safer than before. It earns 7 out of 10 points on our scale, with a point for its collision-avoidance tech and one for a five-star overall rating from the NHTSA. (Read more about how we rate cars.)

The tech joins a full complement of airbags, stability control, and a rearview camera on the Civic.

In its crash tests, the IIHS rated the Civic “Good” in every crash test. However, its headlights were rated "Poor," so the 2019 Civic didn't qualify for a Top Safety Pick award.

The NHTSA rates the current Civic at five stars overall for most models, although Civic Coupes earned four stars in the frontal crash test for the passenger side.

Used Honda Civic for sale near

The 2019 Honda Civic wants for little and offers a wide range of trims.

Every 2019 Civic includes automatic emergency braking, adaptive cruise control, and active lane control—features that cost about $1,000 last year. That's good news for everyone, but enthusiasts may be dismayed to learn that the optional sprightly turbo-4 engine can no longer be paired with a 6-speed manual transmission.

The Civic LX sedan's $20,345 price climbs to $21,145 when its standard 6-speed manual is swapped for a continuously variable transmission (CVT). A coupe version of the Civic LX—only available with a CVT—costs $21,545.

For $1,700 more, a new Civic Sport trim level swaps a 5.0-inch display for a 7.0-inch touchscreen for infotainment with Apple CarPlay and Android Auto compatibility, 18-inch wheels, keyless ignition, and a number of appearance upgrades. The Civic Sport is available in both sedan and coupe versions with either the 6-speed manual or the CVT, but it uses the same 158-horsepower 2.0-liter inline-4 as the Civic LX.

Upgrading to the Civic EX pushes the Civic's price another $1,000 to $24,095 for the coupe and $24,295. It loses the Sport's 18-inch wheels but gains a 174-hp 1.5-liter turbo-4, power driver's seat, moonroof, dual-zone automatic climate control, heated front seats, and a right-side camera that monitors the vehicle's blind spots.

Previously, the Civic EX could be had with a 6-speed manual transmission, but that combination disappeared for 2019. On the bright side, the turbo-4 engine was previously optional on the Civic EX.

Leather seats are optional on the Civic EX sedan (turning it into the Civic EX-L) for $1,200.

The Civic Touring tops the lineup for $28,195 in sedan guise and $27,745 as a coupe. It builds on the EX-L with 18-inch wheels, LED headlights, navigation, and a few other features.

Look up frugal in the dictionary and you’ll find the 2019 Honda Civic.

The 2019 Honda Civic has a lengthy fuel economy story to tell, so we’ll jump right to the last chapter: there’s not a thirsty one in the bunch.

We derive our 7 out of 10 score here based on what Honda says is the most popular configuration, which is a turbocharged sedan with the CVT. (Read more about how we rate cars.)

The Civic Si doesn’t impart a big fuel economy hit for its extra power: it’s rated at 28/38/32 mpg regardless of body style. With 305 hp underhood, the Civic Type R is guzzler of the pack at 22/28/25 mpg that, if we’re honest, isn’t bad for its performance.

1 Review
5 star
4 star
100%
3 star
2 star
1 star
Rate and Review your car for The Car Connection! Tell us your own ratings for a vehicle you own. Rate your car on Performance, Safety, Features and more.
Write a Review
2019 Honda Civic EX CVT

Unlike the others- Value for money