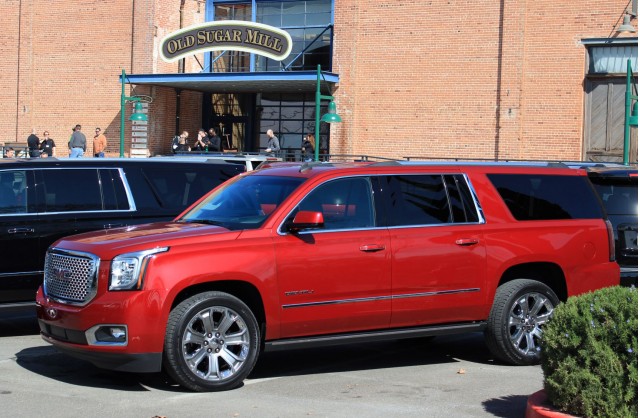 GMC has the exclusive on the 6.2-liter V-8--for now, at least. The similar Chevy Suburban seems a lock to adopt the bigger V-8 at some point in its new generation.

In its all-new form, the 2015 GMC Yukon is one of the more impressive full-sized, truck-based SUVs on the market. It's also one of the few remaining on the market. More modern styling and features, and more efficient powertrains make GMC’s 2015 Yukon a very compelling offering in the crowded crossover/SUV marketplace.

The Yukon family of SUVs--Yukon, long-wheelbase Yukon XL, and luxurious Yukon Denali--adopt many of the changes applied to the Sierra, though GMC points out that the related SUVs don't share any body panels with the new full-size trucks.

The Yukon and Yukon XL are also related to the 2015 Chevy Tahoe and 2015 Suburban, sharing powertrains and much of the internal structure between the family of SUVs.

Available in two body styles as before, the Yukon rides on two wheelbases: the standard version's wheelbase is 116 inches, while the Yukon XL's is 130 inches. Both are identical to the outgoing 2014 models, though overall length has grown by almost two inches. The styling is still traditional, but despite the very angular look, GMC says it's much more aerodynamically favorable than on the outgoing utes. Most models have projector-beam headlamps; Denali models have a distinctive grille and high-intensity discharge headlamps.

The cabin is covered in soft-touch materials; ambient lighting is available. Compared to the previous-generation Yukon, materials and design have been updated throughout the cabin, making for a much more luxurious experience, particularly in Denali-trim examples.

Powertrains are shared with the full-size Sierra pickup as well as the other GM SUVs. There's no V-6 on the Yukon's spec sheet--and the former Hybrid edition isn't present, either. The standard engine is the same 5.3-liter V-8 found in the Sierra; in the Yukon, it's rated at 355 horsepower and 383 pound-feet of torque. The upgrade engine will be GM's new 6.2-liter V-8, with 420 hp and 450 lb-ft of torque. Both powerplants will be teamed with a six-speed automatic, and a choice of rear- or four-wheel drive. In our time behind the wheel of the 2015 Yukon, the new V-8s are impressive, delivering strong acceleration and balanced gas mileage thanks to a pair of technologies new to the Yukon: direct injection and cylinder-deactivation technology. The new technology yields EPA gas mileage ratings as high as 16 mpg city, 23 mpg highway, and 18 mpg combined.

For better performance, the Yukon's frame is now composed primarily of high-strength steel, for better crash safety and structural rigidity. It's still a live-axle, leaf-spring design, but the rear track has been widened. A locking rear differential is standard. The Yukon also now has electric power steering, like the Sierra, and Denali models get a set of magnetically-controlled shocks. Maximum towing is rated at 8,500 pounds.

The Yukon's interior remake shares its sleeker look with the Sierra, but it's distinguished by a new flat-folding arrangement for the second- and third-row seats, with optional power assistance. Legroom is also improved in the second row. Interior storage is upgraded: the center console is large enough to store a notebook computer. Noise damping has been a special focus; the doors are mounted for less wind rustle, and the windshield and front glass are laminated for less sound intrusion. Ride quality is very good, and cabin quietness is remarkable. The third-row seating has been improved, though only in long-wheelbase Yukon XL models is it suitable for medium-sized adults; otherwise, it's best reserved for children. An available power-folding system for the second and third rows makes cargo-area access much easier; the seats can be laid down (or, in the case of the third row, raised back into seating position) by the press of a few buttons in the rear hatch area.

The Yukon merits some of GM's newest safety technology. Along with the usual airbags and stability control, the Yukon also gets a front-center airbags when it's equipped with front bucket seats. Adaptive cruise control is an option, as are a lane-departure warning system with seat-mounted haptic alerts, blind-spot monitors, forward collision alerts, and front parking sensors.

Among the new and returning features on the Yukon utes are Bose audio; keyless entry; pushbutton start; an 8.0-inch LCD touchscreen interface; a head-up display; a power tailgate; a cargo-management system; and up to five USB ports located on the center console. A Blu-Ray DVD entertainment system will also be an option, as will wheels sized up to 22 inches.

The squared-off, high-belted exterior of the 2015 Yukon meets a refined, luxurious interior for a much-improved look.

With a squarer, more straight-edged look, the 2015 GMC Yukon puts on a crisp business suit in place of its previous smart-casual look. The cabin gets a range of upgrades in design and layout, too, moving the Yukon experience closer to luxury territory--and fully into that realm in Denali form.

Real aluminum and genuine wood trims adorn the Denali, giving the Yukon's quality leather a suitable match. The look of the interior is upgraded not just with better materials, but with more modern, almost sedan-like design, shedding some of the truck-like tendencies of the previous-generation Yukon.

A clever rising center display screen hides a cubby space with a powered USB port, making the perfect place to stash your phone out of site while staying connected. In the instrument panel, an LCD display relays several ranges of information, including cylinder deactivation status, gas mileage, and more. The overall effect is of a much more modern, high-tech look.

Full-size SUVs require strong engines, not just for acceleration and passing, but for towing and hauling--people actually use these expensive people-movers for real work (and real, hard play). Fortunately, the 2015 GMC Yukon has a pair of engines that are up to the task.

The standard Yukon and Yukon XL get GM's new 5.3-liter V-8, rated at 355 horsepower and 383 pound-feet of torque. Yukon Denali models get an upgrade to the 6.2-liter V-8 and its 420-horsepower and 460-pound-foot ratings. All versions of the Yukon can choose from rear-wheel-drive or four-wheel-drive systems.

With direct injection for improved engine responsiveness and more precise fuel metering, as well as cylinder deactivation technology that can cut half of the cylinders off under low-load situations, the new V-8s, in both 5.3-liter and 6.2-liter forms, are both surprisingly efficient and eminently capable.

The cylinder deactivation system can silently and seamlessly turn off half of the V-8's cylinders, letting you cruise in V-4 mode. It's so well-executed, you'll only notice by looking at the instrument panel LCD, where a "V4" or "V8" indicator announces the current status. If more acceleration is required than V4 mode can produce, the other four cylinders fire back up almost instantly.

Combined with a towing capacity of up to 8,600 pounds, the 2015 GMC Yukon's performance is at the upper edge of all SUVs, making it a top pick for those who do more than commute or haul family to work or school--but also a fairly efficient choice for those who require an SUV that can do it all.

Improved materials and more efficient use of space expand the utility of the 2015 GMC Yukon.

To call the new Yukon's interior an improvement over the previous model is to engage in a considerable amount of understatement. It's not that the last Yukon's cabin was poorly executed, but rather that the new one is close to brilliant.

Leather upholstery, particularly in Denali models, ascends to luxury territory, while the real aluminum and wood trim makes a further claim to luxury status. Even in less-optioned models, overall fit and finish of the cabin is solid and tidy.

A great deal of effort went into quieting the cabin of the new Yukon, from special exterior design concerns to available active noise cancellation; even with the electronic aids, however, the cabin of the Yukon is quiet, allowing easy conversations at normal indoor volumes.

The 2015 Yukon doesn't scrimp on safety equipment, leveraging some of GM's latest high-tech to improve driver awareness as well as accident avoidance.

The 2015 GMC Yukon hasn't been tested by the Insurance Institute for Highway Safety (IIHS); and it likely won't be, as that agency doesn't usually test the largest body-on-frame SUVs. But crash-test ratings from the National Highway Traffic Safety Administration (NHTSA) are out, and the Yukon earns excellent five-star ratings for frontal and side impact, with a four-star Overall Score because of the three-star rollover score (a matter of geometry and a high center of mass common to most SUVs).

Some of the available safety features found on the 2015 GMC Yukon include: vibrating driver's seat to alert the driver of the location of certain crash threats; adaptive cruise control with automatic braking; and sensors that detect crash threats from all sides of the vehicle, alerting the driver.

Used GMC Yukon for sale near

From Blu-Ray to head-up display, the 2015 GMC Yukon offers a selection of today's best technology.

The 2015 GMC Yukon takes strides toward raising its appeal through appearance, both inside and out, and improved materials and space usage--but without the features you and your family need, it's all for naught. Fortunately, GM has amped up the technology as well.

Optional extras (some of which come standard on higher-trim models) include driver assistance and alert technologies like a vibrating driver's seat that warns of hazards; forward collision alert, rear cross-traffic alert, and side blind-zone alert; adaptive cruise control with automatic braking; a head-up display; and more. Other optional upgrades include keyless entry and push-button start, a heated/tilt/telescoping steering wheel, power-folding second- and third-row seats, and a height-programmable powered rear lift gate. An abundance of USB ports can be added (bringing the total up to six), and second- and third-row Blu-Ray entertainment is available.

Optional upgrades on the Denali models are fewer owing to their already long standard feature sheet, but include: a head-up display, a variety of unique 22-inch wheels, retractable steps, a roof rack, a power sunroof, rear-seat headphones, rear-seat entertainment with Blu-Ray, and a heated split-folding second row bench seat.

The 2015 GMC Yukon is a full-size SUV with truck-like capabilities, and it's accordingly thirsty at the pump.

With two engines and both 2WD and 4WD variants available, the GMC Yukon offers a range of efficiency and capability, though it loses the hybrid version of the previous generation.

The standard 5.3-liter V-8 engine in a 2WD model rates as high as 23 mpg highway and 18 mpg combined, a figure brought down somewhat by its 16 mpg city rating. At the other end of the spectrum, the 4WD Yukon Denali XL with the 6.2-liter V-8 engine rates 14 mpg city, 20 mpg highway, and 16 mpg combined. The rest of the available variations on the Yukon theme fit between these two bookends.

Whichever version of the Yukon you choose, you're paying a price at the pump for the passenger, cargo, and towing capacity offered by these substantial full-size SUVs. As many steps as GM has taken to improve the gas mileage of its new V-8 engine, including direct injection and cylinder deactivation, the reality of physics weighs in heavily--and these nearly 6,000-pound vehicles are heavy.

2 Reviews
5 star
50%
4 star
3 star
50%
2 star
1 star
Rate and Review your car for The Car Connection! Tell us your own ratings for a vehicle you own. Rate your car on Performance, Safety, Features and more.
Write a Review
2015 GMC Yukon 4WD 4-Door SLE

The Yukon is great car, but there are rooms of improvements: fuel consumption, interior space, third seat row to be more comfortable...
people found this helpful.
Was this review helpful to you? Yes
Browse Used Listings
in your area
7.8
Overall
Expert Rating
Rating breakdown on a scale of 1 to 10?
Compare the 2015 GMC Yukon against the competition
Compare All Cars
Looking for a different year of the GMC Yukon?
Read reviews & get prices
The Car Connection Daily Headlines