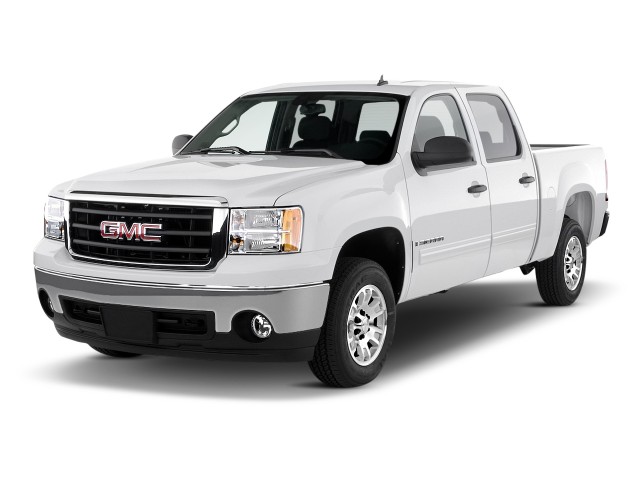 Discounts have never been stronger on full-size trucks; the four-year-old Sierra should be a particularly good deal since it's been unchanged, even in the face of newer competition.

The 2011 GMC Sierra covers all the essential pickup-truck bases, even the green one.

The GMC Sierra 1500 was completely redesigned in 2007, alongside the nearly identical Chevrolet Silverado, and it's still among the better choices in the full-size pickup-truck class. In truth, each of the big five brands--Ford, Chevy/GMC, Dodge, Nissan and Toyota--has points in its favor, and the 2011 Sierra lands squarely in the middle of the pack for its wide variety in powertrains, its pleasant handling, and its titanic towing capacity.

It may not ride with the sophistication of the Ram 1500, or offer the turbo boost of Ford's F-150 V-6, but the Sierra does lead the class with its Hybrid pickup's fuel economy--while also serving out base V-6 and V-8 engines for utility trucks and fleet uses. It steers pretty naturally, too, and the ride quality's fairly carlike for a vehicle with its capabilities.

Only minor changes to four-wheel-drive option packages make it on the order sheets this year. The Sierra's about due for a reskin, but GM's difficulties have put that off for at least another couple of years. It should hold up relatively well--and for sure, GMC fans won't have a reason to look anywhere else so long as they're not stuck on the F-150's small towing advantage or the Ram's rippling HEMI powertrain.

The 2011 GMC Sierra lineup look good in a low-key way, with distinctive interiors for work and luxury versions.

It's been a while since the GMC Sierra last toured through the styling studios. It was completely redesigned in 2007, at the same time GM restyled its fraternal twin, the Chevrolet Silverado, and little has changed since. That's fine--the Sierra has a  conservative but tasteful look that still seems fresh today. The major difference with the Silverado is the GMC's large rectangular grille, which we prefer to the Chevy's somewhat softer front end and corners. We imagine lots of unfortunate car bumpers are stamped with those huge "GMC" letters after accidents, but there's no mistaking the truck for any other brand's pickup. Behind the front end, the Sierra is quite plain, even more stark than the latest Ford F-150; the Toyota Tundra and Nissan Titan try the hardest to evade the usual truck styling cliches and they fail to convince us of their good looks, so playing it safe works out well for GMC.

The Sierra's interior differs from base models to upscale versions. The less expensive versions sport a simple, upright design with larger controls and door handles, the kind that make it better suited for work duty. Pricey versions get a cabin that might fit in a traditionally styled luxury sedan. The upgraded instrument panel has a smoother, lower design, as well as surfaces and materials that come together nicely. The woodgrain trim strikes us as decent but not totally convincing, but otherwise the Sierra is tailored well for the chores it has on its to-do list.

The 2011 GMC Sierra 1500 has smooth power and handling, even in its most complex Hybrid edition.

Most any shopper will be satisfied by one of the refined and responsive powertrains found in the 2011 GMC Sierra.

For workhorse duty there's a base 195-horsepower, 4.3-liter V-6, but it's really meant only for fleet use and for those on the tightest of budgets. A flexible-fuel-capable, 302-hp 4.8-liter V-8 gives buyers their first choice, but the better option is the next step up the Sierra's powertrain ladder, to a flex-fuel 5.3-liter V-8 with 315 hp and cylinder deactivation. This engine's standard in XFE models and optional in other versions. Top-line Sierra pickups sport a 6.2-liter, 403-hp, flex-fuel V-8 that also shows up in the Cadillac Escalade. We'd choose the 5.3-liter V-8 for its blend of power and fuel economy, but with the bigger V-8, sports-sedan acceleration is available.

The base V-6 and base V-8 are teamed with a four-speed automatic that's fairly outdated by passenger-car standards. The rest of entries in the Sierra lineup use a six-speed automatic that shifts pretty smoothly, and help it to achieve better fuel economy while cutting down on noise. The Sierra can be had with either rear- or four-wheel drive; a single-range transfer case is standard on base versions, while dual-range 4WD is an option. An "Autotrac" electronically controlled four-wheel-drive system is featured on Denali models.

The Sierra matches its competitive 10,700-pound towing rating and payload numbers with quick, almost carlike steering and well-sorted handling. It's one of the easiest full-size pickups to drive quickly: it has communicative steering that's better than most other full-size pickups, though the Ford F-150's new electronic power steering sets a new high-water mark among trucks. Body lean is a given in any truck, but the Sierra manages it well, while providing a ride that's not jouncy or brittle, except possibly in the most extreme off-road versions.

The Sierra Hybrid earns special mention here because of its vastly more complex drivetrain. The combination pairs a 6.0-liter V-8 with cylinder deactivation to an electrically variable transmission (EVT) with two electric motor/generators, four fixed-ratio gears, and a 300-volt nickel-metal-hydride battery pack. In all, the drivetrain pieces generate the equivalent of 332 horsepower and 367 pound-feet of torque, which gives the Hybrid acceleration pretty close to that of models outfitted with the 5.3-liter V-8 engine. A key difference: eerily smooth and quiet acceleration on battery power alone, up to about 25 mph. With its electric steering and regenerative brakes, the Sierra Hybrid feels more detached and the brakes are more spongy than on other models, but it's nothing that can't be mastered over time.

The 2011 GMC Sierra is roomy inside and useful out back; more supportive seats would be welcome.

The 2011 GMC Sierra wins over truck buyers with lots of options for cargo and cabin space, in gas-only and in hybrid models.

In either version of the pickup, wide and flat seats across the front mean plenty of room, if not plenty of lateral support when driving. On five-seat Sierras, there's a big center console to divide off passenger space, and to give the dash a richer, more upscale look. Six-passenger versions have a higher, more workmanlike dash that leaves enough space beneath for a middle passenger to find decent leg room. Any of the front-seaters can find their way around the Sierra's dash with ease, thanks to big controls with clear displays.

Of the three body styles, the regular cab has the least room behind the front seats. The Extended Cab slides by with enough space for tools and gear. The Crew Cab has full four-door access and interior space, and is good for three-across adult comfort. The seat itself sits quite close to vertical, making longer rides less comfortable, but it does fold along a 60:40 split to preserve some cargo space as it's needed. The back seat doesn't quite have the leg room of competitive four-door, full-size pickups, either. On Hybrid models, there's no storage under the rear seat; that's where the battery pack lives.

As with other vehicles that share the Sierra's platform, this truck has noticeably better fit and finish than prior GM pickups. Materials feel better than utility-grade, and high-end versions feel and look richer than expected. Road and wind noise is low, and the Hybrid is particularly quiet in operation.

Safety ratings are in limbo for the new model year, but the 2011 GMC Sierra still scores well with both of the big crash-test agencies.

Unlike some other vehicles, the Sierra hasn't been caught by the changeover in rating systems, but its star ratings as judged by the National Highway Traffic Safety Administration (NHTSA) have been shaved a bit. The NHTSA now gives the Sierra a mix of five- and four-star ratings, split between body styles. The Crew Cab versions are the top-rated models, with five stars overall, while the Regular and Extended Cab models get four stars overall. All versions earn the Feds' top score for side-impact safety.

Over at the Insurance Institute for Highway Safety (IIHS), the 2011 Sierra spans the ratings. For frontal impacts, the Sierra is rated "Good." Side-impact protection gets an "Acceptable" rating, while roof-crush strength hasn't been measured.

On the options list are recommended features like parking sensors and a rearview camera, which can help drivers who can't see much to the Sierra's rear quarters. Power-adjustable pedals can be a boon for shorter drivers, but be warned: they strip most brake pedals of their accurate feel.

Used GMC Sierra 1500 for sale near

Denali and Hybrid versions get quite plush, but for the most part, the GMC Sierra stays true to its blue-collar roots with plenty of value.

It's one of the mainstays of the General Motors pickup-truck lineup, and as such, the 2011 GMC Sierra comes in a dizzying array of bed styles, cabs, powertrains, trims, and features. It can be trimmed out and gussied up to the extreme, from its back-to-basics work truck form into a truly luxurious vehicle.

The actual trim levels include the Work, and include everything from SL, SLE1, SLE2, and SLT, all the way up to the ritzy, plush Denali trucks. On that base Work edition, the equipment's kept to a minimum: standard features include the minimum of an AM/FM radio (with an option to delete it); hand-cranked windows; vinyl seats; and manual door locks.

Start ticking the options boxes, and the Sierra turns into a $50,000 leather-lined play truck with nearly every feature you'd find in a Cadillac luxury sedan. The Sierra can be outfitted with DVD navigation; real-time traffic; Bluetooth connectivity; a power sunroof and a power rear window; 22-inch wheels; a factory-installed bedliner; and leather upholstery. GMC also adds on an All-Terrain package with tow hooks, skid plates, and rescue fittings for drivers ready to exercise its off-road talents. Most versions come with a USB port for hooking up your audio player.

With the Hybrid model, many of the luxury features become standard equipment. Its pricetag starts in the high $30,000 range, and can blow through $50,000 when the pricier version is optioned up. The Hybrid gets standard automatic climate control, Bluetooth and steering-wheel audio controls; the navigation system comes with the Premium version, along with Bose audio, a hard bed cover, and leather.

The GMC Sierra gets credit for its technically complex, higher-mileage Hybrid model--but the big V-8s even out the fuel economy score.

Hybrids and big V-8s balance out the 2011 GMC Sierra's green scores, with the Hybrid model earning best-in-class numbers, while the luxury-edition V-8 cuts those figures by at least a third.

The Sierra lineup for 2011 includes four V-8 engines and one V-8 with hybrid motors and batteries. The Sierra Hybrid earns the best fuel economy of all, predictably, with its EPA-rated 20/23 mpg. From there, it's a gradual descent into the mid-teens of fuel economy ratings. With the 5.3-liter V-8, the Sierra is rated at 15/21 mpg--which is better than the 4.3-liter V-6's 15/20 mpg, in part due to the six-speed automatic that's paired with the V-8, versus the four-speed that twins with the six.

Worst GMC I ever purchased