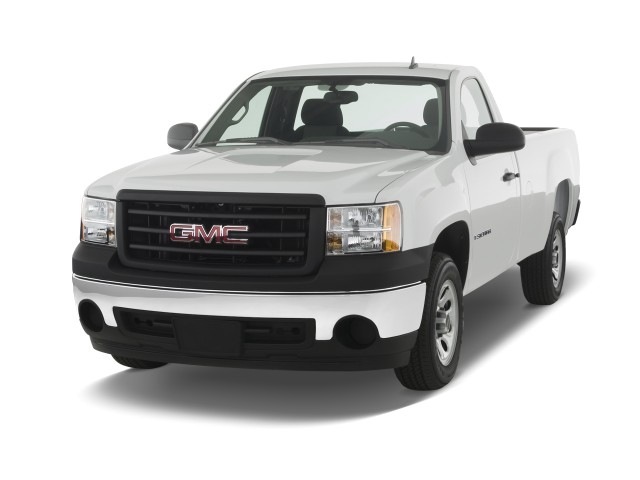 Those who need even more payload or towing capacity than the 2008 GMC Sierra 1500 can provide should look instead at the Sierra 2500 HD and 3500 HD models.

The 2008 GMC Sierra isn’t the most macho-looking of the full-size trucks, but it’s one of the easiest to live with.

GMC's full-size Sierra pickup was completely redesigned for 2007, and it returns with only modest changes in standard features for the 2008 model year and a new All Terrain model. The 2008 GMC Sierra 1500 is mechanically similar and closely related to Chevrolet's Silverado pickups.

The 2008 GMC Sierra 1500 is available in base Work Truck (WT), SL, SLE1, and SLE2 models, and SLT trim, with either rear- or four-wheel drive. Three cab styles are offered--regular, extended, and crew cab--and three bed lengths (up to eight feet) are available. A Z71 off-road package is offered as well.

The 5.3- and 6.0-liter models are more efficient than competing engines of the same size, thanks to Active Fuel Management, which helps improve fuel efficiency by cutting fuel use while coasting or cruising. The 5.3-liter models of the 2008 GMC Sierra 1500 with rear-wheel drive are rated at 15 mpg city, 20 mpg highway, which is identical to the base V-6.

Overall, the 2008 GMC Sierra 1500 is one of the most energetic and nimble full-size pickups to drive, with good, communicative steering and very refined engines. The 5.3-liter engine has enough power for most needs, and the four-speed automatic transmissions shift responsively in general.

The Sierra's interior is extremely well isolated from road and wind noise. The upgraded instrument panel in the top models of the 2008 GMC Sierra 1500 is very carlike, with a smooth, low design, as well as surfaces and materials that come together well. Other models get a simpler, more upright design with larger controls and door handles--better suited for work duty.

Among the features found on the 2008 GMC Sierra 1500 is an available stadium-style rear seat with a 60/40-split design. It can be easily folded up to provide an uninterrupted load floor. Either section of the split seat can also be stowed independently, allowing room for both cargo and a rear-seat passenger. Entry to the rear seat/storage area of extended-cab models is eased with new rear access doors that open 170 degrees.

New for 2008 is the Sierra All Terrain model, which caters to the off-road crowd with a more refined package that builds on the existing Z71 Off Road bundle, including Rancho Tenneco shocks, a heavy-duty trailer package, a special grille and trim, and two-tone leather seats. The 2008 GMC Sierra Denali ranks at the top of the lineup and has exclusive additional equipment that's not available in the otherwise similar Chevrolet Silverado.

The 2008 GMC Sierra 1500 has top five-star results in federal-government crash tests for frontal and side impact protection. Stability and traction control are standard across the line, along with anti-lock brakes; head/curtain airbags are available on Sierra SLE and SLT models. The IIHS hasn't tested the Sierra, but the nearly identical Chevrolet Silverado was rated only Acceptable in the seat-based rear-impact test.

Maybe the 2008 GMC Sierra 1500's "manliness" and "chiseled looks" are the automotive equivalent of a handsome hunk, but that fake plastic wood makes a statement as well.

Most reviewers read by TheCarConnection.com's team are impressed by the 2008 GMC Sierra 1500's looks.

Cars.com is a fan of the GMC 2008 Sierra 1500's "chiseled front end mainly because it looks manlier--always a good thing where trucks are concerned--and more assertive" (sorry, ladies). Kelley Blue Book expands on the "masculinity" theme, making it not only manly but rich as well: "the 2008 GMC Sierra 1500 does share the 'strong, silent-type' handsomeness of the Silverado...an upscale look is highlighted by narrow gaps between body panels." Car and Driver comments that the Sierra is an "outstanding line of full-size pickups that offer an excellent combination of good looks."

Edmunds expresses appreciation for this GMC 2008 model's interior, noting its "pleasing fit and finish inside [and] an attractive dash design." Kelley Blue Book says the "2008 GMC Sierra 1500 benefits from GM's extensive reworking of both full-size pickups and full-size SUVs." Cars.com, however, notes "the vast planks of plastic 'wood' that attempt to warm up the interior" of the GMC 2008 Sierra 1500, efforts that it says "are undermined by the occasional unsightly wavy spots that give away their clear fakeness."

The 2008 GMC Sierra 1500 meets most towing and hauling needs, with a bit of wind at its back thanks to ample V-8 power.

If the 2008 GMC Sierra 1500 looks like the automotive equivalent of a "big strong man," it is certainly one under the hood as well.

TheCarConnection.com notes that this GMC 2008 model has brute strength to spare with its "range of V-8 engines and one V-6 that can have anywhere from 195 to 403 horsepower" as reported by Cars.com. Car and Driver highlights "towing capacities range from a modest 4300 pounds for the basic V-6 work truck (WT) to 13,000 pounds for the 3500HD with a Duramax turbo-diesel." Most will opt for the all-aluminum 5.3-liter V-8 rated at 315 hp and 338 pound-feet of torque, some versions of which "can run on E85 ethanol fuel," according to ConsumerGuide. Cars.com reports that "the 5.3-liter V-8 is also a gutsy performer that doesn't feel taxed in the least moving the 5,326-pound Sierra crew cab...[and] also emits a pleasing V-8 rumble." Edmunds reports that 2008 GMC Sierra 1500's "acceleration is certainly acceptable with either the 4.8- or 5.3-liter V8," while the "optional 6.0-liter V8 can get the truck to 60 mph in 7.9 seconds."

This GMC 2008 model's V-8 engine is mated to a four-speed automatic. Cars.com says, "don't scoff at the transmission's low gear count; it's well-matched to the V-8, and its unobtrusive shifts are a welcome quality and contribute to the truck's overall sense of refinement," adding that the transmission "will also kick down quickly if you need to pass." ConsumerGuide confirms this report: "[the] smooth-shifting transmission kicks down quickly for more passing power."

Edmunds reports that the "four-speed automatic transmission with a tow/haul mode is standard on all Sierra pickups with the exception of the Denali, which has a six-speed automatic." Four-wheel drive is available; Autotrac, available on 4WD Work and LS trims, "features an automatic setting that shifts into 4WD when wheel slippage is detected."

Cars.com reports "EPA ratings run from 12 to 15 mpg city and 17 to 20 mpg highway for 1500-series trucks." Edmunds says that while these figures are "hardly impressive," the 5.3-liter engine is "the most efficient V8 available in a mainstream full-size truck"--due in part to its Active Fuel Management feature, which shuts down half of the cylinders at highway cruising speed.

"With an unladen cargo bed the Sierra's ride quality is fairly stiff, but the suspension does a good job soaking up large imperfections in the road," reports Cars.com, adding that "reasonably precise steering response gives the driver much appreciated confidence when driving at highway speeds." However, this source warns that the 2008 GMC Sierra 1500's "brakes are less praiseworthy." While "they don't have any trouble stopping this rig...the pedal itself doesn't offer much sensation."

Edmunds considers this GMC 2008 model "a very comfortable and easy truck to drive," despite the fact that it is "hampered by a slightly larger turning circle than most other trucks." ConsumerGuide observes "noticeable body lean in fast turns and quick changes of direction" but acknowledges "the steering is nicely weighted, if a bit numb." Kelley Blue Book finds it "surprisingly nimble and easy to maneuver."

The 2008 GMC Sierra 1500 offers high levels of comfort and quietness, though the rear seats could be better.

TheCarConnection.com sees mixed reactions to the GMC 2008 Sierra 1500 in terms of comfort and quality.

Despite the size of this GMC 2008 model's club cab, Cars.com "was expecting it to be a little more spacious and comfortable." While this source reports "good headroom," the reviewer's legs "were touching the back of the front seat," and complains that "the rather upright backrest isn't very comfortable."

ConsumerGuide also says that while the 2008 GMC Sierra 1500's "legroom is ample in the crew cab" front seats, it is in "short supply" in the back. All reviews, however, rave about the exquisite front cab seating; "you sink into the cushy seats," according to Cars.com, and Edmunds reports that the "seats are comfortable for long drives."

Cars.com details "a variety of cargo box lengths," ranging from 5.3 to 8.1 feet in length. Interior cargo space is a mixed bag; ConsumerGuide reports that the 2008 GMC Sierra 1500's "rear seat cushion flips back against the seatback, leaving a large cargo area with a nearly flat floor." The Pure Pickup option offers "upper and lower gloveboxes," while "bucket seats come with a roomy console bin," and "the bench seat is available with a flip-down center armrest that doubles as a large storage bin." However, there "are few other interior storage cubbies"; Edmunds complains about "mediocre interior storage and cupholders."

There are few such complaints about this GMC 2008 model's interior fit and finish, however; the Car and Driver reviewer comments that it "surprises us just how pleasant the interiors of GM's full-size pickups have become." Cars.com reports that "vinyl seating surfaces are standard," but the SLT trim is "equipped with leather seats finished in a two-tone color scheme that's part of the All Terrain package." ConsumerGuide attests that "gauges are easy to see and read," and "interior materials are better than expected of a work-oriented truck." Edmunds praises the interior's "tight build quality."

Consumer Guide reports that "road noise in Sierra is lower than in most pickups...wind noise intrudes only above 60 mph." Edmunds describes it as a "refined and very quiet ride"

The 2008 GMC Sierra 1500 is definitely one of the safer trucks on the road today.

The 2008 GMC Sierra 1500 earns superior marks from the National Highway Traffic Safety Administration (NHTSA). At the time of this writing, the Insurance Institute for Highway Safety (IIHS) has not tested the GMC 2008 Sierra 1500.

Car and Driver reports "four-wheel antilock brakes and an electronic stability system" as standard offerings on this GMC's 2008 model. ConsumerGuide reports additional standard safety equipment that includes "dual front airbags, antilock brakes, antiskid system w/rollover sensor (for the Crew Cab only), tire-pressure monitor, daytime running lights." It is a concern that "Side curtain airbags and adjustable pedals are optional on most models" of the GMC 2008 Sierra 1500, according to Edmunds.

ConsumerGuide says that the 2008 GMC Sierra 1500's "visibility is generally good, though the extended cab's thick rear pillars hinder view to back corners."

Used GMC Sierra 1500 for sale near

The 2008 GMC Sierra 1500 offers so many trim levels and choices, it can baffle the average shopper.

TheCarConnection.com notes that the 2008 GMC Sierra 1500 comes in many different trim levels, each with their own features available.

Cars.com notes there are "many choices" when it comes to the 2008 GMC Sierra 1500; available trims are Work, SL, SLE1, SLE2, SLT, and Denali. According to Kelley Blue Book, the "multiplicity of trim levels...allow you to fine-tune your Sierra."

ConsumerGuide says that the GMC 2008 Sierra 1500 is "among the best large pickup trucks for refinement and available features," advising that "any truck buyer would be well-advised to give these recommended picks a long, hard look."

Be the first one to write a review on 2008 GMC Sierra 1500
Rate and Review your car for The Car Connection! Tell us your own ratings for a vehicle you own. Rate your car on Performance, Safety, Features and more.
Write a Review
Browse Used Listings
in your area

7.6
Overall
Expert Rating
Rating breakdown on a scale of 1 to 10?
Compare the 2008 GMC Sierra 1500 against the competition
Compare All Cars
Looking for a different year of the GMC Sierra 1500?
Read reviews & get prices
Related Used Listings
Browse used listings in your area