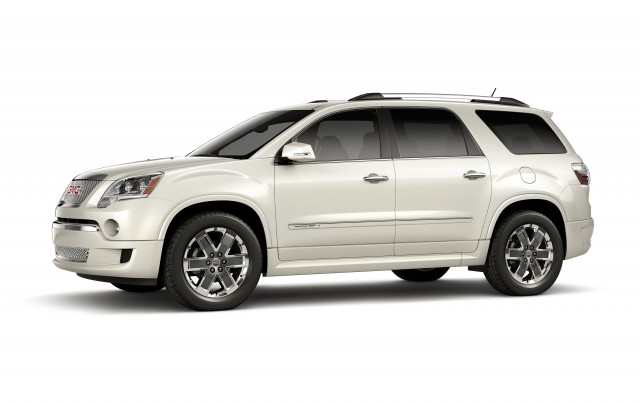 The Acadia is mechanically identical to the Buick Enclave and Chevy Traverse--so if you're looking for something a bit softer-looking or a bit less expensive, GM has you covered.

The 2012 GMC Acadia: better for people than a big SUV, better looking than a minivan.

In the vast middle ground between station wagons and full-size sport-utility vehicles are crossovers. And few crossovers come off so smartly as the GMC Acadia, an eight- or seven-passenger utility vehicle that shares some of its running gear with the Chevy Traverse and Buick Enclave, but wears a suit of chunky sheetmetal all its own.

Available with either front- or all-wheel drive, the Acadia has a single powertrain motivating all versions. It's a 3.6-liter V-6 with 288 horsepower, coupled to a six-speed automatic that takes some prodding to snap off shifts. Acceleration is fine, but the Acadia's ride and steering feel are finer--and towing capacity is as high as 5200 pounds, depending on which model you've specified.

The Acadia's interior sports a pair of buckets in front and a three-child bench seat in the way-back, but whether it seats seven or eight depends on the middle row, a bench unless optioned up to captain's chairs. The front two rows are perfectly comfortable, even for large adults. They'll even find ample head room in the back seat, but clambering back there won't be elegant, and the low bottom cushion won't be very supportive.

In any Acadia, both the second and third rows of seats fold almost flat to boost cargo storage. From 20 cubic feet with the third-row seat in the upright position, the Acadia's storage capacity blooms to more than 115 cubic feet when the rear two rows of seats are folded. The cargo floor sits higher than in some crossovers, but a power tailgate helps make loading up the Acadia easier.

Safety scores are excellent. Both the NHTSA and the IIHS give the Acadia their top overall ratings, and the crossover comes with standard stability control, curtain airbags, with an option for a rearview camera.

The Acadia comes in base SL form with the usual power features, a CD player, and a cloth interior. By the time you've paid up to the Denali version, you'll be nearing the $50,000 mark--but you'll have DVD navigation, mahogany wood trim, heated and ventilated front seats, leather upholstery, and USB and Bluetooth connections for your phone.

It's nearly as useful as a minivan, and doesn't have the sliding side doors that condemn those vehicles to "swagger-wagon" status, at best. The Acadia's a little tougher than that--and it looks the part, too.

It's the most carlike of GMC vehicles, and the 2012 Acadia looks it, with smartly creased corners and a polished interior.

With its conservatively dressed, nicely detailed cabin and sheetmetal with one foot in the truck world and one in the crossover realm, the 2012 GMC Acadia has the styling to charm both audiences, and families too.

The Acadia could be our favorite of the GM crossover trio, which includes the Chevy Traverse and Buick Enclave. The plainer Traverse fights anonymity, while the Enclave's feminine interior falls a bit short in materials. The Acadia's more chunky, rugged style nods its head to GMC's full-size trucks. And that means the hard plastics inside come off a bit better, while its straight sheetmetal lines and chiseled wheel wells come off like the automotive equivalent of a casual blazer. It's dressy, but it's also ready to get things done.

Inside, the Acadia wears a simpler look than its corporate kin, too, though it's well-sorted and major controls are easy to find. The dark trims and metallic trim come off polished, and Denali versions with mahogany trim are particularly handsome. We'd take issue with the red-lit instruments, but blue and green have been spoken for elsewhere, leaving GMC with Pontiac's old hallmark color.

There's adequate performance in the 2012 GMC Acadia's V-6, but its strongest point is ride quality.

The 2012 GMC Acadia is available with a sole powertrain, configured with front-wheel drive or, optionally, all-wheel drive. In either version, straight-line performance is a little short of brisk, but the Acadia's ride and steering feel overcome its undeniable heft a bit better.

The heart of the Acadia is a 3.6-liter V-6 with direct injection and 288 horsepower. Teamed with a six-speed automatic transmission, the powertrain accelerates strongly enough for midrange passing and highway merging, but must first overcome its substantial 5000-pound curb weight. The transmission is slow to respond, especially at urban speeds, but shifts are generally smooth and clean.

With the optional all-wheel-drive system, the Acadia can send up to 65 percent of its power to the rear wheels. That can be useful in uphill takeoffs, when a bit of torque steer comes into play. The AWD system's also a good idea when towing anything near the Acadia's 5200-pound tow rating--and of course, in the northern tier of states where foul weather usually comes down in solid form.

While it's a heavy vehicle, the Acadia does a good job of feeling a little smaller than it is. Mostly that's due to its independent suspension, to its light power steering feel and the well-balanced ride quality, which mutes out most every bump without blocking out the feel of the pavement. It's more agile than it looks, and the handling's more than predictable, it's confident.

For families needing supreme comfort in their SUV-ish wagon, the 2012 GMC Acadia excels.

The GMC Acadia makes the most of its big crossover wagon body, though it sits a little higher for people and cargo loading than something like the nifty Ford Flex.

Inside the Acadia, the well-configured, flexible seating makes room for seven or eight passengers, depending on whether the second-row seats are a bench or buckets. A third-row seat is standard equipment. It's the closest thing to a GMC minivan you'll find, aside from sliding doors.

Up front, the driver and front passenger will find plush but firm seats, with heating and ventilation on the Denali models that's a must if a black interior is specified. The cushions add to the high driving position that makes forward visibility so great. The second-row seats are adult-sized, and whether they're the optional captain's chairs or a bench, they're quite comfortable for larger riders. These seats also slide fore and aft on rails to expand leg room if it's not needed in the third row.

The third-row seat might sit very close to the floor, but it still provides enough head room for adults to ride back there on occasion. They won't have it easy, clambering in back, as they would in a real minivan. With the third row up, the Acadia has 20 cubic feet of room for cargo; fold down the second- and third-row seats, and it reveals 115 cubic feet of space. The Acadia's load floor sits a bit higher than in some other crossovers, but a power tailgate is almost a must, especially if the Acadia's being used more often for cargo than for people.

The Acadia's interior is tight and quiet, with excellent damping of road, wind, and engine noise. Build quality and switchgear is also top-notch, and controls are straightforward and will put the driver at ease compared to the complicated interfaces in some luxury crossovers. The only major disappointment in the Acadia is the abundance of hard, hollow-feeling plastic that panels the dash and center console.

The 2012 GMC Acadia is a standout for safety, even in a class of very safe vehicles.

The 2012 GMC Acadia promises top-notch safety, and according to the major crash-testing agencies, it delivers.

With its strong, carlike body and stout overall design, the Acadia earns the highest overall ratings from both the NHTSA and the IIHS. The National Highway Traffic Safety Administration gives it an overall rating of five stars, split between four-star front-impact scores and five-star side-impact numbers. The Acadia also aces the Insurance Institute for Highway Safety (IIHS) roof strength test, receiving top 'good' ratings across the board, which makes it a Top Safety Pick.

The Acadia's list of safety gear includes standard anti-lock brakes, traction and stability control; front-seat side airbags, and curtain bags that reach to the third-row seat. OnStar, GM's telematics system, is provided standard with six months of service, too. Rear parking sensors are standard, but front sensors are not offered, and neither are blind-spot monitors, though the Acadia's side rearview mirrors now have blind-spot zones for better visibility.

They'll come in handy, because like other big crossovers, the Acadia has somewhat poor visibility to the back. Shorter drivers will have issues when changing lanes or backing up--all the more reason to take our recommendation and buy the optional rearview camera, which can be a boon in parking lots.

Used GMC Acadia for sale near

The 2012 GMC Acadia--particularly the Denali--feels every bit a luxury crossover vehicle.

With the new Denali model joining the lineup in the 2011 model year, the Acadia is largely carried over for 2012, with a few new added features in the mix.

The 2012 Acadia comes in SL, SLE, SLT and Denali versions. All offer the 3.6-liter V-6 engine and six-speed automatic, but interior trim differs widely. The more affordable SL and SLE models sport basic but comfortable cloth upholstery, while the SLT and Denali models have leather-upholstered seats. The Denali's, in fact, is perforated leather, paired with mahogany dash trim and leather trim for the doors and steering wheel.

All Acadia crossovers have standard power locks, windows and mirrors; cruise control; front and rear air conditioning; satellite radio; and a USB port. On SLT versions, a 10-speaker Bose audio system is offered, along with a six-disc CD changer. On these three trim levels, options include a power tailgate, heated front seats, a head-up display, a dual-pane sunroof, Bluetooth, and a DVD entertainment system. On Acadias with the DVD player, the USB port moves inside a dash-top bin, leaving your music player out of sight--but possibly out of mind, too.

The Acadia Denali makes most of those features standard. Along with 20-inch wheels, HID headlamps and a new grille, the Denali adds on DVD navigation with real-time traffic; three-zone climate control; Bluetooth; remote start; and heated and ventilated front seats.

New this year are a power outlet on the center console, revised trim pieces, and on the Denali, hill-hold technology.

It has reasonable fuel economy for an eight-passenger vehicle, but the 2012 GMC Acadia isn't a gas-mileage champion.

As is the case with most large crossovers, the 2012 GMC Acadia rates well enough in highway fuel economy, but often checks in with averages closer to the lower city-cycle ratings.

The Acadia shares its six-speed automatic transmission with other GM vehicles, and as in those other crossovers, the wide span of gear ratios helps provide impressive performance.

Review continues below
The EPA rates the Acadia at 17/24 mpg in front-drive versions, and at 16/23 mpg in all-wheel-drive models. We think those figures are optimistic. In repeated test drives of the Acadia and its Buick Enclave and Chevy Traverse siblings, we've only seen real-world gas mileage near the bottom of that scale.
Continue Reading

1 Review
5 star
100%
4 star
3 star
2 star
1 star
Rate and Review your car for The Car Connection! Tell us your own ratings for a vehicle you own. Rate your car on Performance, Safety, Features and more.
Write a Review
For 2012 GMC Acadia

Great ride. Good room. EZ to drive. Would buy again.
people found this helpful.
Was this review helpful to you? Yes
USED PRICE RANGE
$5,000 - $22,590
Browse Used Listings
in your area
8.2
Overall
Expert Rating
Rating breakdown on a scale of 1 to 10?
Compare the 2012 GMC Acadia against the competition
Compare All Cars
Looking for a different year of the GMC Acadia?
Read reviews & get prices
Related Used Listings
Browse used listings in your area
See More Used
The Car Connection Daily Headlines