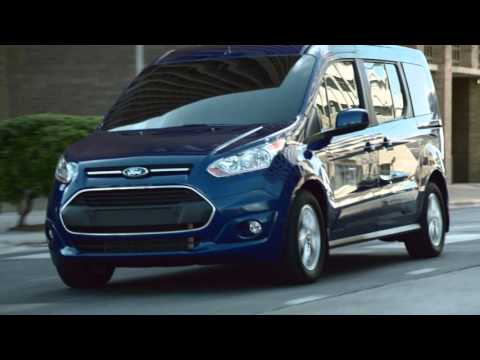 If you need a van for anything beyond typical small-business needs (and light delivery tasks), go with the larger Transit models.

The 2016 Ford Transit Connect eschews the ungainly mass and size of traditional commercial vans, while the nimble, appealing Wagon that will remind some of when minivans weren't so big and bloated.

If you're thinking that the 2016 Ford Transit Connect definitely doesn't fit into a clear vehicle class, hold on; you may have been missing one of the newest market segments—compact vans that aim for small business and might be up for family business.

The Transit Connect was redesigned last year, and it now goes up against a much wider range of rivals, including the Chevrolet City Express, Ram ProMaster City, and Nissan NV200.

Take what makes SUVs and vans so appealing, and omit much of what might turn you off, and you end up with the Transit Connect. It's a great alternative to hefty full-size vans, yet definitely manages to dodge the stigma (and bloat) of modern, not-so-mini minivans.

While the Transit Connect itself is a commercial model, the Transit Connect Wagon is a passenger-oriented variant, with seating for up to seven and a focus not just toward families but also to crafty hipsters, hobbyists, and DIY types. Ford is quite smartly bypassing the main minivan messaging of a generation ago yet revisiting what made minivans so popular in the 1980s: offering up transportation for people and stuff, in a way that's versatile, spacious, and frugal, without being so cumbersome to drive.

Within the Ford lineup, the 2016 Transit Connect bridges the gap between the Ford C-Max hybrid hatchbacks and the new full-size Transit vans, which have replaced the Econoline (or E-Series) vans. And with this latest generation of the Transit Connect, which made its debut late in the 2014 model year, it definitely borrows some clear influences and hardware from the Escape crossover.

The 2016 Ford Transit Connect family doesn't drive much like a van, and that's a good thing. It mostly has the driving dynamics of a small car, matched with enough space and payload to handle most of what small-business owners will throw at it. The front-wheel-drive Transit Connect and Transit Connect Wagon models offer a choice of either a 2.5-liter 4-cylinder engine or a 1.6-liter turbocharged inline-4.

Both are teamed to a 6-speed automatic transmission. Mileage is a slightly better with the 178-horsepower EcoBoost 1.6-liter inline-4, at 22 mpg city, 29 highway, 25 combined and that engine is a more refined pick because of its accessible mid-rev torque, which results in more comfortable, responsive driving in traffic—although foot-to-the-floor the 169-hp 2.5-liter feels nearly as quick.

The Transit Connect and the Transit Connect Wagon draw from the same goodness mechanically. They're both derived from the Ford Focus platform, with some parts shared with the Ford Escape crossover. Handling is very responsive; steering is well-weighted; and it's perhaps the most nimble, tossable vehicle with three rows of available seating. It's 4,000-pound base curb weight in wagon form isn't entirely noticeable. Although one key performance difference between the two main Transit Connect models is that cargo-oriented models have rear drum brakes, whereas passenger-oriented Transit Connect Wagons come with four-wheel discs.

From a purely practical standpoint, the Transit Connect and Transit Connect Wagon get business done—with surprisingly good comfort and a tight, quiet interior. The front area feels, as in the Ford Escape, like the interior of a small car but elevated several inches—and with the raised roof on every model, more drivers will have more than a foot above their head.

In three-row Wagon versions, the back-seat arrangement is impressive, with the second row split 60/40 and generously sized to fit adults; it has seatbacks that flip forward, then the entire seat folds forward and then deep into the floorwell, all with a continuous motion. The twin, third-row seats can jockey fore and aft a few inches, while they fold flat and an extending shelf allows the cargo floor to be flush.

With wide-opening sliding doors on either side, plus a huge cargo opening, the Transit Connect Wagon is just plain easy to load or reconfigure; adding to that convenience is that this vehicle rides pretty much at car height—so you don't have to step up first, as in many crossover vehicles. You're allowed a choice between one-piece lift-up hatchback or dual side-hinged rear doors; unless you're height-limited (by a garage door, for instance). Of those, we prefer the hatchback setup best for its easy load opening—and for the lack of another visibility-obstructing pillar.

The Transit Connect Wagon is offered in XL, XLT, and Titanium trim levels, with configurations including short-wheelbase (SWB) and long-wheelbase (LWB) versions.The passenger-oriented Wagon can tow up to 2,000 pounds with the Tow Package, which unfortunately is only offered with the 2.5-liter engine. And if you want the short-wheelbase Wagon, you'll have to settle for the middle XLT. Payloads range up to 1,270 pounds (modest, actually, if you plan to carry passengers, too).

Ford Transit Connect XLT and Titanium models can be equipped with MyFord Touch, and as such they include a 6.5-inch touchscreen plus a rearview camera system, HD Radio, satellite radio, and USB port. All models include keyless entry and power windows. At the XLT level, you get standard cruise control, plus MyKey and heated power mirrors.

On top Transit Connect Wagon Titanium models, there's dual-zone automatic climate control and other upgrades, Leather seats are available on the XLT and standard on the Titanium, but an option that we don't necessarily recommend, as the cloth upholstery is comfortable and breathable. Remote start and a panoramic roof are optional, as are reverse sensors.