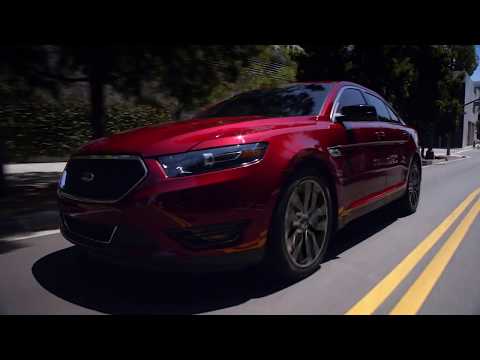 The 2018 Ford Taurus is Ford’s flagship, but only on paper. Rivals are more up-to-date in every way, so shop the competition.

The 2018 Ford Taurus full-size sedans' days are numbered. Offered in SE, SEL, Limited, and SHO trim levels, features fewer engine options  for 2018—its sixth model year since a refresh and its ninth since a clean-sheet redesign. It won't return after next year.

The Taurus earns a 4.8 out of 10 on our scale, a figure buoyed by the Taurus SHO’s strong performance but let down by poor interior packaging, bloated styling, and subpar safety figures. (Read more about how we rate cars.)

With its 112-inch wheelbase and nearly 203-inch overall length, the Taurus is hardly the lithe, lean sedan it once was. Today’s Taurus is a big boat four-door that rides softly and leans into corners when pushed hard. It’s precise, but hardly entertaining and clearly has been tuned for comfort. The Taurus SHO’s dedicated suspension tune overcomes its two-ton mass, even if it too stops short of sports-sedan precision.

Equipment levels are good, but not great for a full-size sedan. A rearview camera is included, but the diminutive 4.2-inch screen and six-speaker audio system are more budget grade than flagship sedan. A larger 8.0-inch touchscreen is available and it features the automaker’s easy-to-use Sync 3 infotainment system with Apple CarPlay and Android Auto.

In terms of safety gear, the Taurus offers forward-collision warnings and adaptive cruise control as part of a pricey option package relegated to Limited and SHO variants only. Automatic emergency braking, a feature we consider essential, isn’t on the options list for Ford’s largest sedan. That’s a surprise given that the rivaling Toyota Avalon comes standard with all of that safety gear.

The Taurus might be Ford’s flagship sedan, but its styling is dowdy.

Unless festooned with a light bar and police graphics, the 2018 Ford Taurus isn’t likely to turn any heads. Its bulbous styling outside and dated, dark interior do it no favors. Other automakers like Dodge and Toyota have proven that big cars needn’t be boring, which is why the 2018 Taurus earns just 3 out of 10 points for its styling. (Read more about how we rate cars.)

The Taurus’ exterior detailing stands in contrast to the automaker’s other, more shapely models. Long front and rear overhangs make the Taurus look even bulkier than its 203-inch overall length suggests. Taurus SEs ride on 18-inch alloy wheels, while Limited and SHO trims feature bigger 20-inchers. The Taurus SHO is dressier with its blacked-out trim, but it’s still decidedly dowdy against the Dodge Charger R/T.

Inside, the Taurus’ wide, tall center console and deep dashboard make it feel less roomy than it actually is. Wood-tone trim adorning the dash and doors on non-SHO trims adds some warmth to an otherwise cold design, but it’s laughably fake. Moreover, the Taurus offers bland beige and black interior hues that stand in contrast to the rich browns seen in rivals.

Even in SHO form, the 2018 Ford Taurus is best as a sedate, heavy highway cruiser.

The 2018 Ford Taurus pairs a soft ride with adequate acceleration easy handling. The Taurus SHO turns things up a notch, but its size ultimately prevents it from impersonating a sports sedan. Overall, the Taurus earns a 4 out of 10, losing a point for the way its body leans into corners. (Read more about how we rate cars.)

Standard on the Taurus line is a 3.5-liter V-6 rated at 288 horsepower and 254 pound-feet of torque. The V-6 pairs well to a 6-speed automatic that’s geared lower in first gear for a good off-the-line feel. The Taurus feels more responsive away from stoplights than the Dodge Charger with its base V-6, but ultimately the Ford’s engine runs out of steam faster.

A 2.0-liter turbo-4 that was available in years past has been dropped for the 2018 model year.

The Taurus SHO’s 3.5-liter twin-turbo V-6 is rated at 365 hp and 350 lb-ft of torque that comes on from just 1,500 rpm. It’s not rocket fast, but the smooth, broad torque helps the SHO feel more fleet of foot than its two-ton curb weight would otherwise suggest.

Non-turbo Taurus sedans (Taurii?) come standard with front-wheel drive. Snow-belters can opt for all-wheel drive on SEL and higher trim levels. All Taurus SHOs are all-wheel drive, all the better to keep their extra power in check.

A long wheelbase and soft suspension tuning deliver a plush ride that takes in big bumps well, especially with the 18-inch alloy wheels fitted to Taurus SE and SEL trim levels. Taurus SHOs have more verve on a curvy road, but they also transmit road imperfections to the cabin. On all versions, the steering is nicely weighted and offers reasonable feedback—but not enough to overcome this big four-door’s mass.

Optional on the SHO is a Performance Package that adds uprated brakes, summer tires, even firmer steering, and a retuned suspension. It’s not unduly stiff and seems worth the $1,300 price tag, albeit with the caveat that snow-belters will want to budget for winter tires.

To blame here is the Taurus’ ancient structure, which is shared with a Volvo design that debuted two decades ago. Volvo’s big S90 sedan is now two generations removed from this old platform, and it shows.

Big car outside, small car inside. The 2018 Ford Taurus sedan’s dimensions are confounding.

The 2018 Ford Taurus takes up a lot of space outside, but it doesn’t leave all that much inside. It’s best experienced from its supportive front seats, which earn it a point that we take back for the confining back seat. Overall, that earns the Taurus just 5 out of 10 points for its comfort. (Read more about how we rate cars.)

SE and SEL versions of the Taurus feature durable cloth upholstery, while Limited and SHO variants have leather seats that are both heated and cooled. The front seats are wide, but so is the center console. Combine that with a deep dashboard and an instrument panel that wraps around into the driver and passenger zones and the Taurus hardly feels stretch-out comfortable up front. Rear-seat passengers suffer about the same. There’s enough space at the outboard seats for two adults, but head room is restricted by the low roofline.

That roofline takes a toll on outward visibility, too. The view over the driver’s right shoulder is compromised by thick roof pillars and a high shelf behind the back seats. Even the view forward is below average thanks to wide roof pillars.

On the bright side, the 20.1-cubic-foot trunk is roomy and models we’ve tested have felt tightly screwed together, if not finished with luxurious, soft-touch materials.

The 2018 Ford Taurus has done well in crash-testing, but it’s short on collision-avoidance tech.

The 2018 Ford Taurus has performed well in crash testing, but this older, slow-selling design hasn’t been subjected to all of the latest evaluations and it’s light on collision-avoidance technology. (Read more about how we rate cars.)

Overall, it earns a 6 out of 10 on account of a five-star overall score from the federal government. The IIHS isn’t as impressed, giving the Taurus a relatively unusual “Acceptable” for its driver-side small-overlap frontal crash-test performance, which simulates two vehicles making impact on a two-lane road. The IIHS says the Taurus performed well otherwise, although its headlights rate “Poor.”

Used Ford Taurus for sale near

The 2018 Ford Taurus is a well-equipped large car that offers a good value for the money—especially given how often this big sedan is discounted by dealers. Overall, we rate it a 5 out of 10, with a point for its standard equipment and a demerit for some quirks with its infotainment systems. (Read more about how we rate cars.)

At the bottom level, the 2018 Taurus SE includes power windows and locks, six-way power front seats, a rearview camera, and a 4.2-inch screen for the audio system with Bluetooth. The Taurus SE is light on whiz-bang features, but it’s also about $28,500, which isn’t all that much cash for this much sheetmetal.

Another $2,500 nets buyers the 2018 Taurus SEL, which loads on dual-zone automatic climate control, satellite radio, a leather-wrapped steering wheel, park assist, and a few other goodies. It’s optionally available with all-wheel drive and a package that adds an 8.0-inch touchscreen for infotainment that features Apple CarPlay and Android Auto compatibility. Leather is optional for $1,495, but at that point it’s probably worth stepping up to the next trim level. The Taurus Limited piles on leather upholstery (cooled up front and heated all around), 20-inch alloy wheels, and Sony-branded speakers. Optional on the Limited is a package that includes forward-collision warnings, adaptive cruise control, and a few other safety items.

Topping the lineup is the Taurus SHO, which features a twin-turbo V-6, a firmer suspension, special seats and upholstery, and some high-grade features like HID headlights that help justify its nearly $44,000 price tag.

All-in, a loaded Taurus SHO with packages that add more performance and luxury goodies runs shy of $48,000—and that’s before any rebates and incentives are applied. It’s not a cut-rate BMW M5, but it’s not priced like one either.

A word about the infotainment systems available in the Taurus: they’re compromised, to say the least. The base system included on SE and SEL trim levels is light on features and has a dated display. We recommend opting for the larger display since Ford’s Sync 3 infotainment system is among the industry’s easiest to operate, but it includes capacitive touch buttons for the audio system that some of our testers find frustrating to operate. Ford has largely moved away from capacitive buttons back to traditional hard buttons in its newer products.

The 2018 Ford Taurus is thirstier than many of its competitors.

With its thriftiest powertrain now a thing of the past, the 2018 Ford Taurus fares below average for a big sedan: a 6 out of 10. (Read more about how we rate cars.)

That figure is based on front-wheel-drive versions fitted with the standard 3.5-liter V-6, which are rated by the EPA at 18 mpg city, 27 highway, 21 combined. All-wheel drive zaps those figures to an SUV-like 17/24/19 mpg, so think twice before signing on the dotted line.

The Taurus SHO’s performance also takes a toll on fuel economy to the tune of 16/24/19 mpg.

By comparison, the front-wheel drive Toyota Avalon is rated at 24 mpg combined and a 40 mpg combined Avalon Hybrid is also available. The Buick Lacrosse is pricier, but also better equipped than the Taurus, and its new mild-hybrid base engine is rated at 29 mpg combined.

1 Review
5 star
100%
4 star
3 star
2 star
1 star
Rate and Review your car for The Car Connection! Tell us your own ratings for a vehicle you own. Rate your car on Performance, Safety, Features and more.
Write a Review
2018 Ford Taurus SEL FWD

Beautiful exterior, intior reliable as can be