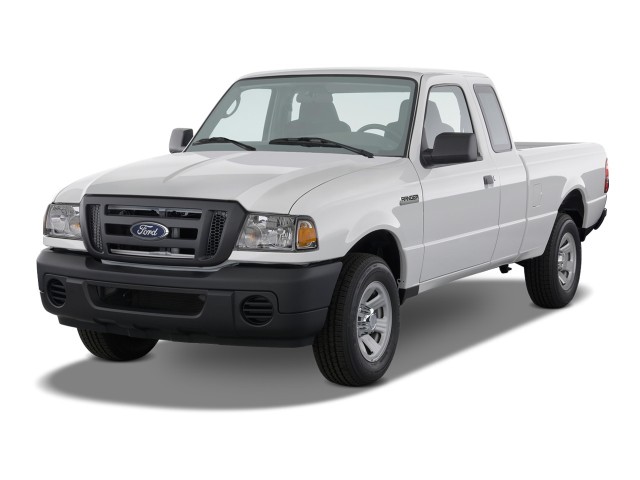 If that relative lack of safety features is an issue, hold your horses for a short while and wait for the 2010 model, which makes some substantial feature improvements.

The 2009 Ford Ranger is an economical—if not modern and refined—choice for those who just want a truck and don't have higher expectations.

Experts at TheCarConnection.com have searched far and wide to bring you the information in this review about the 2009 Ford Ranger. The editors have driven the Ranger to offer you expert input, then looked for further insight from other reviewers. This inclusive review thus gathers the best and most thorough information about the 2009 Ford Ranger available so that you can make a smart buying decision.

The 2009 Ford Ranger is the oldest vehicle in its class—by a long shot. It got its last full redesign in 1990, and despite a powertrain update and a few other refinements, the style has mostly carried over in recent years.

Nearly identical to the Mazda B-Series, the 2009 Ranger is still available in four- and six-cylinder forms, in rear- or four-wheel drive, and two-door Regular Cab and four-door SuperCab configurations are offered. The latter version has two small access doors for cargo stowage; no true four-door model is on the list.

Periodic updates have kept the Ranger's front end looking fresh even if the profile is familiar, and it's actually aged better than some compact trucks. Another plus is that the Ranger's interior has better materials than many compact trucks. Seating is, however, a step behind most compact-pickup rivals.

The Ford Ranger can be an entertaining off-road vehicle, if that's the purpose you have in mind. Its six-foot bed is useful for some weekend and professional uses, but the ubiquitous 4x8 sheet of plywood won't fit.

Safety will be an issue for some shoppers; the 2009 Ford Ranger just doesn't have a competitive features list. Side airbags aren't available; neither is electronic stability control, on a vehicle with a three-star rollover rating.

The 2009 Ford Ranger is a classic—but that means it's pretty dated on all fronts.

The folks in charge of the 2009 Ford Ranger know that one of the vehicle's draws is its longevity; this is the oldest vehicle in its class. It debuted in 1990, and despite an update to the powertrain and slight refinements, the vehicle has yet to be completely redesigned. With that in mind, most reviewers don't bother to discuss the Ranger's styling in much (if any) detail.

The 2009 Ford Ranger's basic shape has been around since the 1990s, and reviews read by TheCarConnection.com report only slight updates over the years. Cars.com notes that "the Ranger's front bumper has been redesigned to cut through the air more efficiently," and "new larger fog lights improve visibility." Automedia says the look is "a tad tougher and bolder." And in certain trim levels, the Ranger does a good job of faking tougher credentials. ConsumerGuide says the "basic design is more than a decade old and shows it," while MyRide.com opines that this "truck desperately needs an update." At Ford, 2009 gets the Ranger a slight update: As Cars.com says, "The Ranger Sport conveys the assertive look and ride height of a four-wheel-drive Ranger at a lower price."

There are even fewer compliments for the 2009 Ford Ranger's interior. Edmunds snipes: "The Ranger's interior was last overhauled during the Clinton administration -- and the first term at that." The reviewer goes on to note that "due to its aged design, it falls short in many other areas, making just about any other small or midsize pickup a better choice."

The 2009 Ford Ranger offers decent performance—but there are many better options to be had that will suit drivers' needs more adeptly.

The 2009 Ford Ranger has a plethora of engine options. Unfortunately, TheCarConnection.com finds that its power never measures up, and handling fails to impress.

Car and Driver says the "flexy chassis and tepid powerplants reduce fun-to-drive index to almost zero" in the 2009 Ford Ranger. There are three engines—but no one seems particularly impressed with any of them. The base engine makes 143 horsepower from a 2.3-liter four-cylinder; stronger versions use a 148-hp, 3.0-liter V-6 or a 207-hp, 4.0-liter V-6.

ConsumerGuide has a slightly different opinion, stating, "acceleration is adequate with the 3.0-liter V-6, but we prefer Rangers with the 4.0 for its extra power." Also notable, ConsumerGuide believes 2009 Ford Rangers "handle competently, with good steering feel and directional stability." They aren't the only reviewers who feel this way. Cars.com lists "maneuverability" and "driving ease" as two of the predominant "likes" about the performance of this truck. ConsumerGuide indicates that the ride quality is "decent for trucks," reporting that Rangers "jiggle on rough roads but absorb big bumps pretty well."

Ranger pickups have up to 6,000 pounds of towing capacity; ConsumerGuide calls them "proven workhorses." As with most trucks reviewed by TheCarConnection.com, there are other options available on the Ford Ranger, including rear- or four-wheel drive. The four-wheel drive can be turned on even while the truck is moving and operates by a simple switch on the Ford.

In the Ranger, Ford's workmanlike performance can be a virtue, and its steering is not bad, but those buyers looking for a cheap economy car would be better served with a real economy car—not a pickup priced like one. Still, TheCarConnection.com's editors have driven many Rangers in the past and owned one as well. The 4.0-liter V-6 is the easiest version to live with, in terms of power and engine noise; conversely, there's almost no reason to recommend the 3.0-liter V-6, since it's not much more powerful than the four-cylinder and gets considerably worse fuel economy.

The 2009 Ford Ranger is tight in terms of space—really tight. Build quality, however, is pleasingly respectable.

Editors at TheCarConnection.com find that the 2009 Ford Ranger lags behind rivals in terms of space. Many drivers will be abjectly disappointed.

In the Ranger, Ford has the only true compact truck left on the market, since the Chevrolet Colorado, Toyota Tacoma, and Nissan Frontier moved into a larger size class. With the Ranger, Ford offers SuperCab models with two rear-hinged doors and Regular Cab versions with very little space between the seats and the rear glass. ConsumerGuide criticizes the rear seat in SuperCab Rangers as "skimpy, cramped, and thus best used for toddlers or cargo," and adds that "entry and exit borders on awkward." Edmunds concurs, claiming the truck's "inward facing jump seats are a quaint reminder of days gone by, but are terrible as a seating option." Although ConsumerGuide says the truck has "good headroom and legroom up front," they also state that "three adults are a tight squeeze" for the front. The basic front seats are in truth not bad: Edmunds finds the front seat to be "acceptable unless you're of tall stature."

All versions of the Ranger sport a six-foot bed that's useful for some weekend and professional needs, but the ubiquitous 4x8 sheet of plywood won't fit.

In the Ranger, Ford installs better materials than are found in many compact trucks. It may not be roomy, but Cars.com lists "build quality" as one of its favorite things about the truck. ConsumerGuide even states, "all models we've tested have been solidly built."

The 2009 Ford Ranger shows its age here, with the lack of several key safety features and a lackluster crash-test record.

The Insurance Institute for Highway Safety (IIHS) gave the 2009 Ford Ranger "acceptable" and "poor" ratings for frontal and rear impacts, respectively, in its assessments.
Side impact tests resulted in a "marginal" rating. According to Edmunds, in National Highway Traffic Safety Administration (NHTSA) crash-test ratings, the 2009 Ford Ranger "earned four out of five stars for driver and front-passenger protection in frontal impacts."

Anti-lock brakes are standard on the 2009 Ford Ranger, but the Ranger shows its advancing age in its lack of side and curtain airbags. Electronic stability control—an especially important feature on rollover-prone pickups—isn't offered either.

Used Ford Ranger for sale near

The 2009 Ford Ranger is a very strong value and offers a respectable feature list for the price.

Experts at TheCarConnection.com are by and large pleased with the features offered on the 2009 Ford Ranger. Most drivers won't be disappointed.

Trim levels include the XL, XLT, Sport, and an FX4 Off-Road model. Edmunds lists one of the main options as the bed size of the Ranger; Ford offers a six-foot bed "on all cab styles and trims, but a seven-foot bed is optional on the regular-cab XL and XLT." The standard material on the seats is cloth, but leather is available. An additional option is the 60/40 split bench seat in front or bucket seats. Satellite radio is available on all 2009 Ford Ranger pickups.

In this Off-Road edition, Ford has an entertaining vehicle, if that's the purpose you have in mind. The 2009 Off-Road Edition Ford Ranger gets standard Rancho shocks, a Class III trailer package, skid plates, sport bucket seats, and an available Torsen limited-slip differential. Edmunds calls the vehicle "competent off-road."

When comparing it to other trucks in the same class, it's no wonder Car and Driver calls it "attractively priced." The 2009 Ford Ranger is priced lower than most competitors. Starting at less than $17,000 for the 2009 Ford Ranger Sport regular cab, it is more affordable than most pickups.

I don't understand why they don't make them anymore. There great small trucks and I can pull trailers no problem.
people found this helpful.
Was this review helpful to you? Yes
2009 Ford Ranger 2WD 2-Door SuperCab 126" XL

6.2
Overall
Expert Rating
Rating breakdown on a scale of 1 to 10?
Compare the 2009 Ford Ranger against the competition
Compare All Cars
Looking for a different year of the Ford Ranger?
Read reviews & get prices
Related Used Listings
Browse used listings in your area