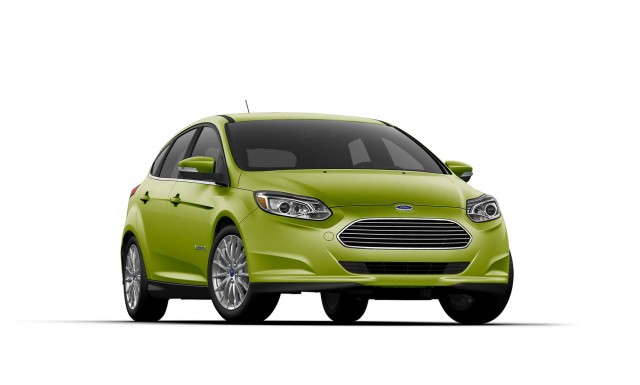 The Ford Focus Electric isn’t available nationwide; beware of local dealers that can’t service it if you have to buy from a more distant dealership.

The 2018 Ford Focus Electric is a competent battery-powered compact hatchback, but it’s low-volume, not available everywhere, and its cargo bay should have been redesigned years ago.

The 2018 Ford Focus Electric is a battery electric hatchback that's a rare sight, and not long for the U.S. It's Ford's only battery electric car on sale in the world, for now, and limited by production and availability.

It directly competes with the Chevrolet Bolt EV, Hyundai Ioniq Electric, Nissan Leaf, and Volkswagen e-Golf. Like all, except the 238-mile Bolt EV, its recently expanded range falls between 105 and 125 miles, seemingly the norm these days. The Ford Focus Electric comes only in a single trim level, roughly equivalent to a higher-end gasoline model, and its sole change for 2018 is one new paint color.

Overall, the Focus Electric gets similar ratings to its gasoline counterpart, with a point deducted for the reduced cargo space and flexibility but a perfect green score of 10 for its zero-emission operation. Overall, we rate the 2018 Ford Focus Electric at 6.6 points out of 10. (Read more about how we rate cars.)

The 7-year-old electric Focus shares some advantages with its gasoline counterparts, but it’s clear that Ford isn’t that interested in making the car truly competitive. Last year it finally got a battery-capacity upgrade and DC fast-charging capability, making it at least possible to take longer roads trips in it. But it remains a niche product selling a few thousand a year, versus 100 times that for its gasoline brethren, and it’s neither sold nor serviced in large swathes of the U.S.

The styling echoes that of the conventional Focus, though there’s no EV version of the Focus four-door sedan offered. Without training, you’ll never know it’s an electric car by looking at either the inside or the outside.

Performance is roughly average among its competitors, as is its range, and like all Focuses, the electric version holds the road well and offers predictable, sporty handling, making it more fun to drive than the Leaf and others.

Against its competitors, in fact, its main drawback is a severely compromised cargo area due to the location of the car’s onboard charger between the rear wheel wells. A creative two-level shelf doesn’t much help with the fact that the cargo bay is far less usable than any gasoline Focus; it’s a problem that Nissan fixed way back in 2013, but its persistence into the seventh year of Ford’s sole electric car shows the company’s disinterest.

The extroverted design of the Ford Focus has aged well, and you’ll never know from the design that this one’s powered by electrons.

The electric version of the Ford Focus is a stealth EV: unless you point it out, most people will never know it runs on battery power rather than gasoline. It’s all but identical looking inside and out, absent a few badges and details, including the charging-port door on the left front fender.

We give the Focus design 5 out of a possible 10 points, just as on the gasoline version: it’s aged well, with lines that are still handsome and remain sporty. The inside is now a little more elaborate than newer contenders, but if you don’t mind a few exaggerated shapes, it functions adequately. (Read more about how we rate cars.)

The Ford Focus Electric is more rewarding to drive than some competitors, but the aging model isn’t nearly as far ahead as it used to be.

The electric version of the Focus hatchback is by far the smoothest and quietest in the range. The engine, transmission, and gas tank are gone, replaced by a 107-kilowatt (143-horsepower) electric motor powering the front wheels. The lithium-ion battery pack now holds 34 kilowatt-hours of energy, enough for a 115-mile EPA range rating. Its energy efficiency is rated at 107 MPGe combined. (Miles Per Gallon Equivalent, or MPGe, is an efficiency measure that specifies how far a car can travel electrically on the amount of energy contained in 1 gallon of gasoline.)

Like its gasoline counterparts, the Focus Electric offers good roadholding, precise steering, and a more rewarding experience behind the wheel than most of its competitors.

We rate it at 6 out of 10, one point above average, for that capability (Read more about how we rate cars.)

The 2018 Ford Focus Electric has the same good front seats and slightly cramped rear as the gasoline models, but its load bay is severely compromised.

All versions of the Focus have comfortable front seats, but are slightly tight in back.

The dashboard, while more stylized and busy than many of the best, is understandable once you learn it, and the soft-touch materials suit the car’s price.

The electric version is quiet, smooth, and without any gears to shift, relaxing to drive, with only a little whine from the electronics in a few circumstances. Its main drawback is the onboard battery charger on the floor of the load bay between the rear wheel wells. It prevents a flat load floor, eats into cargo space, and generally looks amateur—and it’s identical to a problem on the Nissan Leaf that was fixed way back in 2013.

We dock the Focus Electric one point for that problem below the average. It earns a 4 out of 10. (Read more about how we rate cars.)

We can’t give the electric version of the Ford Focus a safety rating, because it hasn’t been rated by either the NHTSA or the IIHS.

The Ford Focus Electric hasn’t been rated for crash safety by either the IIHS or NHTSA since its launch as a 2012 model. While it’s now an aging design, gasoline versions of the Focus get decent scores from both entities. (Read more about how we rate cars.)

The Focus Electric is decently equipped for the price, and last year’s addition of DC fast charging makes it competitive in the segment—though there’s little special to distinguish it.

The gasoline Focus comes with a wide variety of trim levels and options, but that’s not the case for the electric variant. Roughly equivalent to a higher-end trim with an engine, it hasn’t changed over several years except for the fitting of the Sync 3 voice-control and infotainment system in place of the unloved MyFordTouch in earlier years.

Last year, Ford boosted the battery capacity substantially to raise its range from 76 miles to 115 miles. More importantly for longer trips, it also made DC fast-charging standard on the car, which will recharge it to about 80 percent of capacity in roughly half an hour at any CCS charging site.

Starting around $30,000, the Focus Electric qualifies for a $7,500 federal income-tax credit and a $2,500 California purchase rebate, among other incentives.

We give it an 8 out of 10 for good base content, a helpful fast-charging feature, and a good base infotainment system. (Read more about how we rate cars.)

The Ford Focus Electric gets top marks for having no tailpipe emissions and a carbon footprint that lower than its gasoline counterparts.

The battery-electric version of the Ford Focus is powered only by a battery pack recharged from the electricity grid. It has no tailpipe emissions and a lower carbon footprint than its gasoline counterparts even when charged on the dirtiest grids. When recharged on the cleanest grids, including those in California and the Northeast, its carbon footprint is a fraction of its gasoline counterparts’.

For those reasons, we give it our highest green rating of 10 out of 10. (Read more about how we rate cars.)