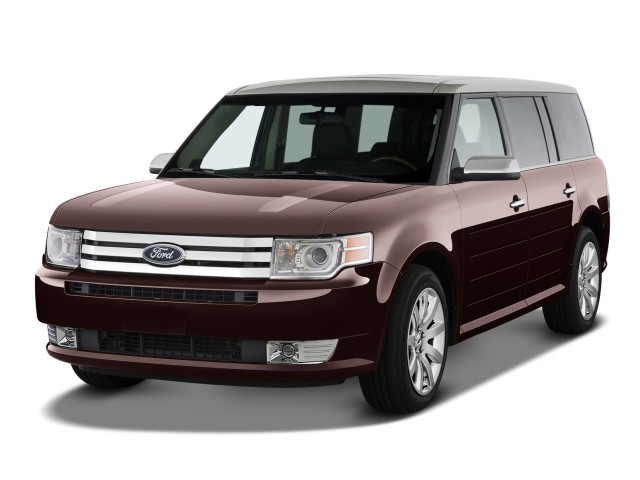 The 2012 Ford Flex has so many gotta-have options, you have to restrain yourself from taking the real-time traffic and the refrigerator--otherwise you'll ring up a $50,000 tab.

One of our top-rated vehicles, the 2012 Ford Flex has real distinction, along with top-shelf turbo power, great seats and great features.

It looks quirky, but there's nothing unconventional about the charming 2012 Ford Flex when it comes to space, comfort, and ride. It's one of the best big crossovers on the market, one of the highest-rated vehicles here at TheCarConnection, and it's basically unchanged for the new model year--and that's just fine.

The Flex has almost a cult following, thanks to its low-riding, box-on-box styling. If you still haven't warmed to its collection of rectangles and straight lines, it's okay--Ford still has the five-seat Edge and seven-passenger Explorer crossovers to sell you. The Flex's acquired taste is a wild mishmash of Fairlane station wagon, MINI Cooper and even Range Rover, and it works. For some of us, at least. Ford lets buyers choose from a palette of roof colors, mirrors finishes, even houndstooth-plaid upholstery, which gives the Flex a lot of latitude with its looks. Even on base versions, the interior's one of the company's best, not quite as radical as the sheetmetal but with lovely materials and tight build quality.

It’s a pleasant vehicle to drive, too, and we think it's a step up from the likes of the Traverse, Pilot, and Highlander. Mostly, it's because of the superior ride quality, descended way back from the Volvo XC90 that spun off the Flex' platform, the same one underpinning the Taurus, the Lincoln MKS and the MKT. Even the base Flex carries itself like a smaller wagon, with crisp steering feel and a compliant feel that comes from its long wheelbase, but great control over its body motions even when it's hustled in a way no family vehicle will ever be used. Trust us on this one.

Powertrains earn passing and curve-setting grades. The basic 3.5-liter, 262-horsepower V-6 works well enough. It's not awesome in any respect, but it's good for acceleration to 60 mph in less than nine seconds, an easy merger even when it's laden with four adults. Paired with a six-speed automatic with well-paced shifts, the Flex can be ordered with all-wheel drive, which adds weight for those who have authentic four-seasons weather. Given the budget, we'd choose the turbocharged, 355-hp EcoBoost Flex, which runs off 0-60 mph times of under seven seconds and lightens up the Flex's footwork, making it faster than anything in the class.

Even after hours on the road, the Flex could be more comfortable than your media room. The front buckets are supportive but soft, with lots of give, and unfortunately, active headrests that stick out too far for ideal comfort. The second-row seats are the Flex's killer app, just as cozy, with limousine-like room in every direction, and a choice of buckets or a bench, even optional footrests for those days when you can't spoil your kids too much. The long wheelbase pays off most here, but even the third-row seat has leg room for smaller adults, though head room is scant for six-footers. The Flex is narrower than the Pilot or Traverse, both of which claim a third seat across their third-row benches.

The Flex is among the safest vehicles you can buy. Its comprehensive safety package includes six airbags, anti-lock brakes, and stability control with anti-rollover technology. A rearview camera and parking sensors are available, as are a blind-spot warning system and adaptive cruise control.

Once it’s loaded with the new Titanium package, the Flex is every bit as luxurious as a Lincoln MKT. Even the basic Flex has an ample standard-features list. On it are third-row seating; an AM/FM/CD player; power windows, locks, and mirrors; a capless fuel-filler system, which means no more misplaced gas caps; and Ford’s MyKey system. The upmarket versions add the turbocharged engine, all-wheel drive and other niceties like a leather interior; a panoramic sunroof; and Ford’s SYNC entertainment/phone controller. Among the more engaging options are Sirius TravelLink, with real-time traffic, weather, sports, and movie listings; pricey Sony sound systems; a DVD entertainment system; 20-inch wheels; a second-row refrigerator; a hidden keyless entry pad that responds to a swipe of a finger like the Apple iPhone; a power tailgate; xenon headlamps; and HD radio. It may sticker at an oxygen-free $55,000, but the Flex Platinum is missing only exotica like night vision and in-car satellite TV in its quest to out-feature every family car on the road.

1 Review
5 star
100%
4 star
3 star
2 star
1 star
Rate and Review your car for The Car Connection! Tell us your own ratings for a vehicle you own. Rate your car on Performance, Safety, Features and more.
Write a Review
2012 Ford Flex 4-Door Titanium AWD w/EcoBoost

The Goodyear 20 inches tires are the only dark point on this car . At Ford recommend pressure (37 pounds)they give a arch ride . Flex deserve beter than those cheap tires . Will be swap for Michelin soon .

Denis Nadeau
+ More »
people found this helpful.
Was this review helpful to you? Yes
USED PRICE RANGE
$5,740 - $18,700
Browse Used Listings
in your area
9.2
Overall
Expert Rating
Rating breakdown on a scale of 1 to 10?
Compare the 2012 Ford Flex against the competition
Compare All Cars
Looking for a different year of the Ford Flex?
Read reviews & get prices
Related Used Listings
Browse used listings in your area
See More Used