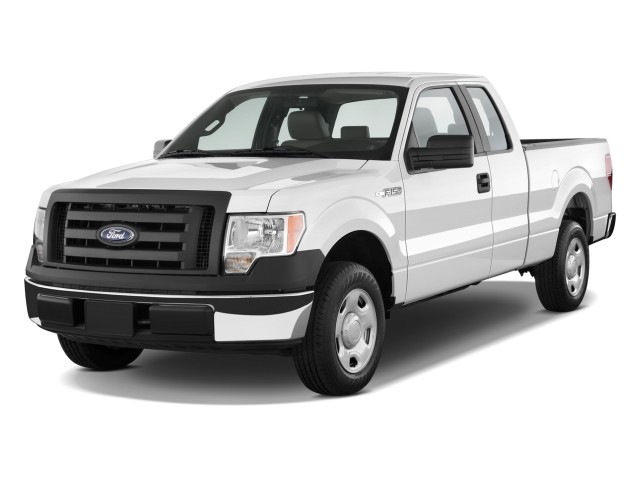 Given current fuel prices, full-size trucks will be "on sale" for the foreseeable future. If you really need a full-size truck, price out an F-150 on TheCarConnection.com and shop your local dealers hard.

The 2009 Ford F-150 is better than the truck it replaces, and in several areas it has moved to the head of its class.

TheCarConnection.com has driven the new 2009 Ford F-150 full-size pickup truck. Our team of truck experts has additionally reviewed competitive evaluations of the 2009 F-150 to develop this comprehensive review. This wide-ranging research enables TheCarConnection.com to assist you in making a wise purchase.

The Ford F-150 has been completely redesigned for 2009; the best-selling truck becomes a little more macho in appearance and a lot more enjoyable inside.

Outside, the new F-150 borrows heavily from its bigger brother, the Super Duty (F-250, F-350, and F-450). The family resemblance shows most in front where the upright and chunky grill gives the truck a strong face. But Ford did not simply down-size the Super Duty's style for the F-150. Along the sides, a classy looking undercut defines the wheel wells. At the rear, the more aerodynamic tailgate features an integrated spoiler along its top edge plus a series of three horizontal character lines (first shown on the 2006 Super Chief show concept) that add visual interest to what would otherwise be a dull expanse of metal (and is on most other trucks).

Ford continues to improve the F-150’s interior. Its strong vertical theme is punctuated with round climate control vents. Larger circular vents improve the airflow in the cabin.

There are three cab configurations with multiple wheelbases and box lengths, providing choices to satisfy just about any trucker's need with the 2009 Ford F-150. Most notably, in the four-door Super Crew, Ford has extended the cab six inches, with nearly all of the extra room going to the rear seating area. Drivers will appreciate that the B-pillar has been moved back, providing better rearward visibility. Additionally, the floor of the rear seating area is now completely flat, and when the rear seats fold up (they nest effortlessly into a compact package against the rear cab wall), a huge parcel can be accommodated behind the front seats.

Under the Ford's hood, the 2009 Ford F-150 can be equipped with a base 4.6-liter two-valve V-8, a 4.6-liter three-valve V-8, and a 5.4-liter three-valve V-8. Ford engineers claim that efficiency is improved across the line, and six-speed automatic transmissions are standard on the top two engines. The base 4.6-liter two-valve engine retains a four-speed automatic. Horsepower ratings for the engines build from 248 to 292 to 320.

For some drivers, economy is now king, and they'll want to know about the new 2009 Ford F-150 SFE (Superior Fuel Efficiency) model. This two-wheel-drive, Super Crew model achieves 15/21 city/highway mpg while maintaining the ability to tow 7,500 pounds—500 more than the GM brethren.

The 2009 Ford F-150 handles better, with greater overall response than before. On- and off-road handing is composed, and while you won't confuse its handling with a Mustang GT, it's not bad for a truck. We welcomed the F-150's improved steering feel and feedback, something that is often absent in full-size trucks. One negative we noted was that over some road surfaces, the floor of the truck resonated. But a new front seat design dramatically enhances comfort as you now sit "in" the seats as opposed to "on" them. In addition to providing better side support, they also provide good long-term comfort.

Ford took significant steps to bring the 2009 Ford F-150 up to date in safety features. Six airbags are standard (four in front with side-curtain airbags that extend to the second row). Anti-lock brakes, traction control and ride stability control are also all standard. Important to those who tow, trailer sway control is also standard. Because the new F-150 is new, it has not been crash tested by the government or the IIHS, but Ford expects it to achieve five-star (or good) ratings on all tests.

The 2009 Ford F-150 is available in seven trim levels including a new, very ritzy Platinum edition. In terms of new features, popular items from the Super Duty have migrated to its little brother. For the first time, the integrated tailgate ladder and box side-step are options on the F-150. Inside, premium Sony sound systems are available, as are SNYC (Ford's voice-activated media and phone interface) and Sirius Travel Link (that provides navigation plus real-time traffic, weather, and fuel prices among other features).

Best vehicle I ever bought.