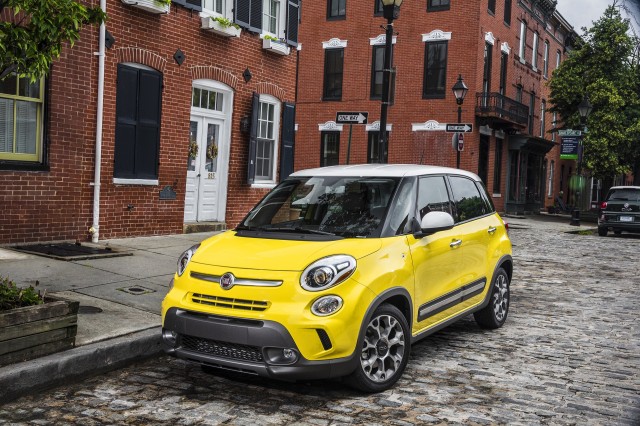 Although the six-speed auto gets the worst EPA-rated fuel economy, we figure it can't be worse than the other two choices, so be sure to sample it if you're interested in a 500L.

Despite sharing a name and look with the Fiat 500 hatchbacks and convertibles, the 500L isn't actually related. Instead, it's built on the same platform as the Fiat Punto, one of the brand's European-market hatchbacks that's substantially bigger. So big, in fact, it's classed as a large car by the EPA even if it's still decidedly a compact to the eye. The 500L represents Fiat's (and therefore Chrysler's) take on a small car, going toe to toe with other taller and larger compacts such as the Kia Soul and Mini Countryman.

To say the 500L looks unique is probably an understatement. Calling it ungainly is kind. We think it's a lovable goofball, much in the same way as the Volkswagen Thing and the aforementioned Countryman. It's bulldog nose is busy: tiered headlamps bookend three distinct horizontal grille elements, reminding us of the cursed Pontiac Aztek, and its helmet-head roof bears an uncanny resemblance to the one on the Countryman. Yet the cartoonish look works here—somehow.

Unlike the exterior, the 500L's cabin isn't nearly as risky or mashed up. Controls sit within basic oval nacelles in contrasting color while large knobs for climate settings beckon your attention more than the small infotainment screen.

The Trekking model is the exception of the 500L lineup. While all other models get the same exterior and interior treatments, the Trekking wears 17-inch wheels, unique front and rear fascias, sill moldings, and flared wheel arches on its exterior and is covered in its own black-and-brown color palette inside. It might look a bit more butch, but we assure you, it's all for show.

Underneath it's skin, the 500L uses a suspension recipe common to most tall wagons with a strut-and-twist-beam setup. However, American-market 500L models get some additional damping help in the form of Koni shocks to make easier work of beaten up American roads. The result is a more accommodating ride than in the Countryman and city-bump damping abilities almost on par with the Kia Soul. Good stability and linear steering make highway driving a breeze, though the 500L's quirky steering wheel has some semi-truck tilt thrown in. That last bit can throw you for a loop when trying to find a comfortable driving position that also allows a clear sight line to gauges.

Fiat's now ubiquitous 1.4-liter MultiAir turbocharged inline-4 provides the 500L its beating heart. At 160 horsepower and 184 pound-feet of torque, it's no slouch, but it's a little more taxed in the heavier 500L than it is in the much smaller 500. Despite what the Trekking model might have you think, there's no all-wheel drive. Sending power exclusively to the front wheels are a trio of transmissions: a six-speed dry dual-clutch automated manual transmission, a six-speed manual transmission, and—new for 2015—a six-speed conventional auto. Its appearance of that last option is likely meant to address negative feedback for the other two, especially the dual-clutch automated manual.

While we haven't tried the new automatic, we did have qualms with both of the existing transmissions. The dual-clutch gearbox begs for a manual mode. Its shifts are slow and agonizingly deliberate, similar to the Dodge Dart. And the manual isn't much better, crippled by a confined pedal box that more than once caught our size 12s, interrupting shifts and making the standard hill-start assist look absent. We wouldn't be surprised if the conventional auto replaces the dual-clutch entirely after a while.

To put the 500L in perspective, it's nearly 28-inches longer and 6-inches wider than its smaller 500 sibling. Driving the point home, Fiat boasts the 500L really is a big car in a small package. The EPA classes it as a large car because of its copious amount of interior room; its high roof unlocks class-above head and shoulder room. Still, the 500L is definitively a compact and best for four adults, max.

The 500L is significantly wider than the 500, too, opening up the cabin enough that drivers and front passengers won't be rubbing elbows. However, the front seats could be more comfortable. Their bottom cushions are quite firm and rounded off at the edge for improved pedal access. That rounding has an adverse effect: a lack of leg support.

Second-row seats are theater-style mounted, meaning they sit slightly higher than seats up front for better rear-seat visibility. Much like the front seats, the second-row sears are firm, but at least they recline for some additional comfort not usually afforded to rear-seat passengers in compacts. And for cargo-carrying flexibility, those seats slide and tumble on some models to allow for bulkier items. The 500L's cargo area has a sliding floor panel for dual-level storage and can fit a couple of large roller bags without dropping the rear seatbacks.

Meanwhile, cabin storage is fairly lacking. The 500L has two small gloveboxes split by a shallow tray providing most of the interior storage. Door pockets can be stuffed with some items, but they're usefulness is extremely limited.

On the safety front, the 500L comes standard with seven airbags, active headrests, and stability control. A rearview camera is available as an option. Visibility is great in the 500L thanks to its large greenhouse, and its available dual-pane sunroof goes a fantastic job of letting the sun in. The National Highway Traffic Safety Administration has yet to crash test the Fiat 500L. However, the Insurance Institute for Highway Safety did test the compact, awarding it with its Top Safety Pick accolade.

Optionally, there's larger Uconnect 6.5 infotainment system available, which has a 6.5-inch touchscreen, SD card slot, text-message functionality, and dealer-programmed nav if you opt for it. You may want to get a normal GPS unit instead of opting for the one provided by dealers: it's rudimentary, the screen is small, and the maps scale slowly. Audiophiles can select the Beats By Dre sound system, which includes six speakers, a subwoofer, an eight-channel amp, and Beats By Dre-specific audio processing.

Fiat offers a small sampling of the customization options familiar to Mini shoppers, such as a roof in contrasting colors and different wheels. And within each of the Easy, Trekking, and Lounge trim levels, there are a handful of available "Collections," which bundle options like nav, parking sensors, the sunroof, a rearview camera, and satellite radio at a slight discount.

Changes for 2015 include the new six-speed auto and availability of a new color; Blue Tornado is offered only on the Trekking model.

Does what it is supposed to do...at a reasonable price...what's not to like?

The story is...DW is commuting 60 miles a day, five days a week...plus normal driving for errands, fun, etc. Really didn't want to put those miles on another Volvo or Acura; but wanted something she would be comfortable in, smaller footprint than before, AND something with a rather tall driver's seat position(all those Texas trucks and SUVs, if you know what I mean). Seriously considered 'smaller' offerings from Lexus(the NX is nearly identical to the footprint of our former RX), Mazda(the CX3 was just hitting the showrooms, as was the Honda HRV)...Volvo hasn't seen fit to bring the XC40 to the States...so, off I go to look at the Countryman(sits too low, costs too much, has too little room) and then drove to the FIAT dealer to look at the X...hmmm, same problems with the X as with the Countryman.

To make a long story longer, I drove the 500L and enjoyed the small footprint, decent cargo space(think bicycle transport), decent trans and engine and decent safety ratings...along with a strong sound system and built-in nav/bluetooth/etc. We opted for the Lounge without sunroof and got it for about $23k. I really don't think we could have found a better deal with the features we wanted from any of the previously mentioned models. 4-year warranty is a plus; but no warranty issues have come up in 6 months/8k miles. Mileage is OK at an average 27, running 87 octane Top Tier fuel. Only one trip of significance and the Elle has a little trouble sitting on 75mph without shifting at the first sign of a hill or headwind...not exactly the 270-300 hp vehicles we have been accustomed to ;).

BIG plus for us is having this much usable space in such a small footprint. Our townhouse garage will hold the RDX or XC60; but just barely. It's very nice having an extra foot fore/aft when parking...and the turning circle is tiny in comparison. All the while, the Elle will hold people and cargo in surprising fashion. The two-tiered cargo area is a stroke of genius. Did I mention visibility for 360 degrees is excellent!!! Especially compared to the sloping, glassless rear ends of so many CUV-styled vehicles of the past few years.

Yeah, the styling is a little quirky; but what isn't nowadays. People say "Why not get the Kia Soul?"...well, I didn't want a Kia, so there. Didn't want a FIT, either...didn't want to pay sticker for the HRV, that's for sure! I think the 500L is pretty much what we needed at a very fair price. Will we keep it forever?...perhaps not, especially if Volvo gets its act together; but I have to say that $20-25k difference in price sure makes the FIAT worth investigating.

We are very happy so far, although it does drive me batty having to actually put the key in the ignition and turn it! Did I mention we are spoiled? :) + More »
people found this helpful.
Was this review helpful to you? Yes
2015 FIAT 500L 5-Door HB Lounge