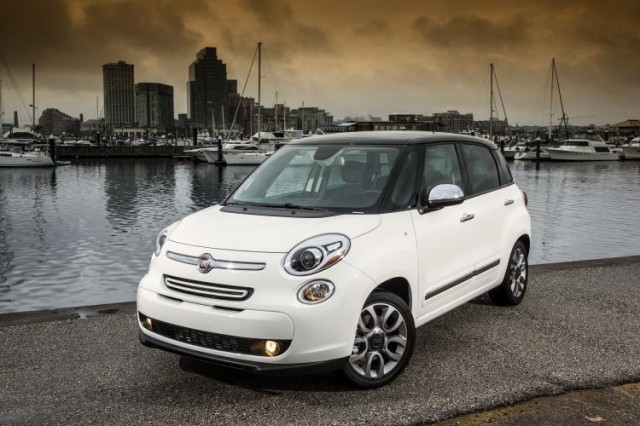 Do you get what you pay for? The free Premium Package on early Fiat 500L hatchbacks bundles a rearview camera and parking sensors, but our frustration with the navigation system led us to turn to our smartphones for guidance.

The 2014 Fiat 500L is nothing if not distinctive. It's an oddly shaped hatchback, from a marginal player in the U.S. market. To top it off, it's the first vehicle built for sale in the U.S. since Yugo, to be assembled in the Balkan nation of Serbia.

Don't confuse this car with anything vaguely Yugo-ish, though. The only relationship is geographic; the Fiat 500L, in fact, isn't even related to the Fiat 500  hatchbacks, either the gas-powered car or the electric version. For reasons of marketing, the tall 500L wagon is instead a version of Fiat's European-market Punto hatchback. It's substantially bigger than the 500, a large car by the EPA's definition, but still a compact car in visual absolutes--and it's an interesting new twist in a small niche that includes the MINI Countryman, Kia Soul, and the Honda Fit.

Like the bulk of those city-sized runabouts, the 500L takes some time to digest, visually. It's not a love-at-first-sight affair, not in the way the 500 can be. It's taller, more quirky, more ungainly--but it's a lovable goof, we think, despite the passing references to everything from the Countryman to the VW Thing. The bulldog nose has a lot going on, with tiered headlamps and three different horizontal grille elements, some of the same bits that tripped up Pontiac's Aztek, and the helmet-head roofline has an uncanny similarity to the one on the MINI. But somehow, the playfully squat works.

The cockpit doesn't tread out on the edge so much. A few simple oval-ish nacelles hold the controls, in contrasting color, with big climate-control knobs faring better than the smallish infotainment screen in the real-estate grab. Most 500L models have a similar interior, but the Trekking model has its own black-and-brown color scheme, to go with its own front and rear fascias, flared wheel openings, body-side sill moldings, and 17-inch alloy wheels.

Powering the 500L is a 1.4-liter MultiAir Turbo four-cylinder rated at 160 horsepower and 184 pound-feet of torque. Power is sent to the front wheels through a six-speed dry dual-clutch transmission or a six-speed manual transmission. With either, the pleasantly hard-working four turns in acceptable acceleration; 0-60 mph times are estimated at 9.1 seconds for the manual, 9.3 seconds for the dual-clutch.

We have qualms with both shifters, though. The dual-clutch begs for manual mode, since the shifts are slow and purposeful, like those on the Dodge Dart--but the shift lever's manual gate works backward (to us), with upshifts requiring a tug down, and downshifts taking a push up. With the manual, the clutch pedal sits in a confined space, and more than once, the small foot box caught our size 12s, interrupting shifts and making the standard hill-start assist look absent. A conventional six-speed automatic is coming, soon, Fiat says.

A straightforward strut-and-twist-beam suspension work well with most tall wagons, and the 500L doesn't change up the formula except in one generous way. The shocks are Koni-brand, chosen to damp out some of the harsher ride motions our worse roads can gin up. The 500L is in fine tune, more accommodating than the Countryman, almost as good at damping out city bumps as the thicker Soul. It responds well at highway speeds too, with fluid steering and good stability, though the steerig wheel itself has some of the bus-driver tilt that's quintessentially Fiat. It can make it difficult to find the right driving position and to see the gauges at the same time--so can the tripometer, which reverses out its final digit while scrolling it, rendering it almost useless at a glance.

Gas mileage is good, but not stellar. The 500L earns EPA-estimated ratings of 24 miles per gallon city, 33 mpg highway, 27 mpg combined with the dual-clutch transmission, and 25/33/28 mpg with the six-speed manual.

Fiat points to EPA interior volume as proof that the 500L is a big car in a small package. It's not a case of all hat, no bistecca, but the 500L isn't quite large. The high roof gives the 500L very good head and shoulder room for all passengers, though it's best for four adults, max.

By the numbers, the 500L is 27.7 inches longer and 6 inches wider than the other city-sized 500. In front, the width is more appreciated, since the 500 forces drivers into awkward stretches to reach the pedals. There's barely any elbow contact with a front passenger, but in both 500L hatchbacks we drove, the seats themselves weren't very comfortable. The bottom cushions are rather hard, and they're rounded off in the European idiom, for easier pedal access--not squared off, for better leg support, as most American drivers probably expect.

It's better in the second row, where the rear seats are positioned even higher than the fronts, and where leg room remains a little more than adequate. The seats are as firm, but they recline, as well as slide and tumble (on some models) so that cargo and passenger space can change as needed. Honda's Magic Seat has some competition here, though we wonder if pragmatic Fit buyers would cross-shop anything so extroverted. A couple of large rolling bags will fit in the cargo area, which has a floor panel that slides into side rails for dual-level storage.

In-car storage space is there but slim in the 500L. Two small gloveboxes are split by a shallow tray, and door pockets make up most of the rest of the available niches.

The 500L is outfitted with seven standard airbags, stability control, and active headrests. The IIHS calls it a Top Safety Pick. A rearview camera is available, along with rear parking sensors. Visibility is great--and the cabin gets sunny with the dual-pane sunroof option, which can't be more than the size of a double-hung window.

The 500L is offered in Pop, Easy, Trekking, and Lounge models. At the base level, the 500L Pop includes air conditioning, cruise control, a trip computer, steering-wheel controls, tilt/telescopic steering, and a multi-position cargo-area panel. Six-speaker sound is also included, with the Uconnect 5.0, offering a 5.0-inch touch screen, voice commands for the radio, hands-free calling, Bluetooth audio streaming, and a media hub with USB and aux-in ports.

Lounge models are at the top of the line, at $24,995, and they include power heated leather seats, driver lumbar adjustment, split-folding rear seatbacks with rear fore-aft adjustment (and recline/tumble), fog lamps, and a dual-zone climate control system.

The options list includes a Premier Package, which is usually $1,700, but will be included for free on all 2014 500L models except the Pop for a limited time. It includes rear parking sensors, a rearview camera, and a Uconnect 6.5 system with a larger 6.5-inch screen, an SD card slot, text-message readback, and available dealer-programmed navigation. The navigation's rudimentary: the screen isn't large and the maps themselves are difficult to scale quickly. It's one case where a good smartphone and a suction-cup mount are a fine substitute.

2 Reviews
5 star
4 star
100%
3 star
2 star
1 star
Rate and Review your car for The Car Connection! Tell us your own ratings for a vehicle you own. Rate your car on Performance, Safety, Features and more.
Write a Review
For 2014 FIAT 500L

Considering everything, if we had to do it all over again, we would definitely make the same decision to by the 500L
+ More »
people found this helpful.
Was this review helpful to you? Yes
For 2014 FIAT 500L